The American Values of Islam

There is no other country in the Western world with as many Muslim converts as in the USA. Particularly for socially disadvantaged African-Americans, mosques are places of family values and social responsibility. By Katrin Simon 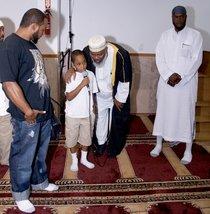 Boy saying the Shahada, the Islamic creed, in the Taqwa Mosque in Brooklyn, New York. According to estimates, about one third of US Muslims are African-American converts

​​"In Islam, there's no racism, no sexism," says Sakina*. "In Islam, I got dignity, as being black and being a woman." She tugs at the colourful cloth wrapped around her hair like a turban. That's why she converted to Islam at the age of 16, she says. Five years ago, Sakina was at high school in Brooklyn and still went by the name of Vivien, and all her friends were African-Americans from Christian families. Her grandmother went to church on Sundays.

Her mother, on the other hand, had to work most weekends, waiting tables to feed her three children. The young woman has never met her father; he disappeared when she was a baby. When Vivien met Jamal aged fifteen, she already had her own experiences with boys behind her: "They abused me. I was a stupid chick falling in love easily. And they only wanted skinny girls, white and blond."

Islam and the rules of the community

The 20-year-old young man also told Vivien how he'd had to help out at a youth social project for a drugs offence. How he'd heard from other young African-American men there that they'd got their lives back under control. How Islam had helped them back on track – its rules, its community. Christianity, they'd told him, was only for whites, a religion for slave-owners who wanted to keep black men down.

Jamal's next stop was the Nation of Islam, which is very active in recruiting young African-American men, especially in ghettos and jails. Founded in 1930, the Nation of Islam (NOI) is an African-American grouping that claims Islam is the true religion of all black people, and interprets Christianity as an inherently racist, white religion. It came to prominence during the civil rights movement era, with Malcolm X as one of its star preachers and the boxer Muhammad Ali raising its public profile.

For many Americans, the group's current chairman, the charismatic and controversial Louis Farrakhan – infamous for his numerous racist statements – is the prototype of the black Muslim. Yet the NOI is an extremely contentious organisation among other Muslims, many of whom regard it as heretic. The NOI has been in a state of decline for years, and Farrakhan too is old and sick, his leadership clearly weakened. 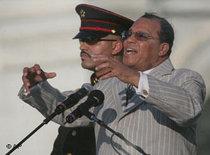 For many, controversial Louis Farrakhan is the prototype of the black US Muslim. However, in the past few years, many Afro-American Muslims have converted to traditional Sunni Islam

​​Like many former NOI members, Jamal gradually shifted to Sunni Islam, now regularly attending a mosque in the Brooklyn neighbourhood of Bedford-Stuyvesant by the name of Masjid at-Taqwa. The mosque's imam, Siraj Wahhaj, was also active in the NOI for several years as a young man before turning to Sunni Islam.

Wahhaj is now regarded as one of the best known and most charismatic imams in America, a man who is constantly travelling, with many of his speeches available online. Young people in particular – and by no means only African-American Muslims – admire his combination of political sermons, conservative morals and an almost evangelical style of preaching.

The first time Jamal took Vivien along to the mosque, she was impressed by the verve of the Friday sermon. Imam Siraj spoke about American society's lack of morals. About broken families. Alcohol and drugs. About how it was above all poverty, criminality and racism that were destroying black families in particular. 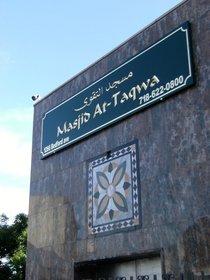 Like most mosques in the US, the Al-Taqwa Mosque in Brooklyn, New York, is an "ethnic mosque", attended mainly by Afro-American Muslims

​​At the time, Sakina says, she thought it was great that Imam Siraj spoke directly to the men in the mosque: "He was really screaming at them!" He told them to accept responsibility. Told them to be there for their families. Told them to get a job instead of hanging out on the streets with their friends. And that there was only one solution to rid them of all these evils: abiding by the rules of Islam. Where women had not only duties but rights too. Where men had not only rights but duties too. And he told them that the Koran forbade racism.

Equality for all believers

And then Imam Siraj told the story of Malcolm X. The story of a small-time gangster from Detroit who had found Islam in jail and become a better person. Who had renounced alcohol, criminality and promiscuity, first leading the Nation of Islam's temple in Manhattan and then finding the true Islam on his pilgrimage to Mecca. An Islam in which all believers are equal, no matter what their skin colour or gender.

Vivien recited the Shahada, the Muslim declaration of belief, in the mosque the very next Friday. From then on, she has called herself Sakina and is now one of a large and constantly growing group of African-Americans who have converted to Islam. The USA is the only country in the Western world where converts form the largest single group of Muslims. The precise figures are contentious, but the US government assumes there are some 6 million Muslims in America, more than a third of whom are African-American converts.

Siraj Wahhaj, the Imam of Al-Taqwa mosque in Brooklyn. Wahhaj became a Sunni Muslim in 1975, urging US Muslims to come to orthodox Islam

​​Like Jamal, many of them are young men whose conversion gives their lives meaning after fractures in their biographies, helping them to get back on track. Or young women like Sakina, who have experienced feelings of debasement and disrespect for their own dignity as black women and hope a conversion will strengthen their identities, who are looking for security and stable family structures.

The black churches, many converts and even critical Christians claim, no longer fulfil these roles sufficiently. Instead of taking care of the problems in the ghettos, the churches have formed a cosy establishment closest to the black middle class.

This vacuum is filled not only by groups like the Nation of Islam, but also by Sunni imams like Siraj Wahhaj. A worldview that combines patriarchal conservative values with critique of racist political structures – often enough legitimised by Christianity – is very attractive. Especially when it is presented through Islamic rhetoric and symbolism.

It's not just since 11 September 2001 that African-Americans have been able to demonstrate maximum inner distance from the Christian-dominated white majority by converting to Islam. Only to then actually return to rather American values in the name of their new faith.

Sakina and Jamal married shortly after Sakina's conversion. Jamal is now a social worker himself, working with ex-gang members. Sakina is studying at community college and wants to be a teacher. The couple have two daughters, who Sakina wants to be doctors or lawyers when they grow up. They were both actively involved in the Obama campaign during the election: "Although he's not against homosexual marriages and abortion – but hey, he's a brother. That’s even more important!"

The only thing that worries Sakina is that Jamal recently mentioned taking a second wife. Polygamy, although officially banned in the USA, is not uncommon among African-American Muslims. "It's his Islamic right, I know. Still. Immigrant Muslims ain’t doing that neither!" Sakina feels this is one American custom she and Jamal really don't need to adopt: "Let's the Mormons doing that. We could better spend the money for the wedding traveling to Mecca."

* Names changed by the author.

Katrin Simon is currently working on her doctoral thesis on African-American Islam at the Free University Berlin, Germany.

Islamic Architecture
Modern Houses of Worship: Mosques in the USA
In the United States there are over 200 mosques that combine traditional designs from Islamic countries with modern American architecture. A report by Abdul-Ahmad Rashid

Muslims in the US and in Europe
The Tale of Two Continents
Although the US is the prime target of Islamist extremists, it is Europe's less integrated Muslims who provide more recruits to the terrorist cause, says Shada Islam in her analysis

END_OF_DOCUMENT_TOKEN_TO_BE_REPLACED
Social media
and networks
Subscribe to our
newsletter