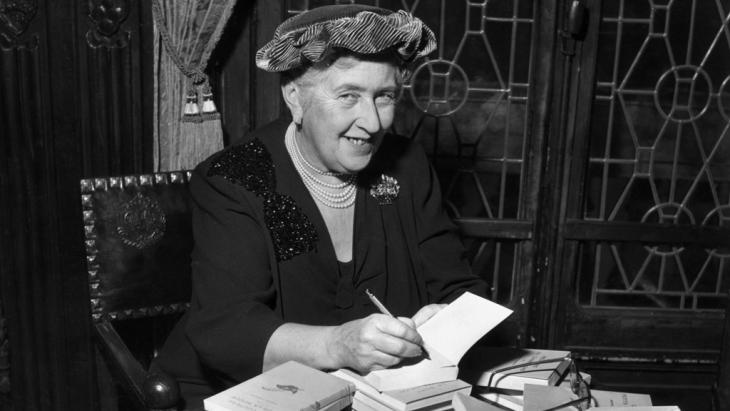 Agatha Christie and the Orient
When murder came to Mesopotamia

Hydrangea hedges, village gossip and high tea form the backdrop for Agatha Christie′s detective stories, which, sold in their millions worldwide, shape our image of England. But many of these typically English stereotypes and settings were actually created in the Middle East. By Christine Pfeilschifter

In 1928, when Agatha Christie boarded the Orient Express for Baghdad, she was already a celebrated author in Great Britain and her private life was becoming increasingly public. After a run of personal setbacks, she wanted nothing more than to gather new experiences, far away from British society.

At the time, all of London was crazy about the Iraqi capital, Baghdad. Before her departure, experienced travellers advised Agatha Christie that if she really wanted to get to know the foreign culture, she should steer well clear of the British community in Baghdad. This, of course, was exactly what she intended to do – but her plan was foiled before she even got off the train, by overly-friendly fellow travellers. She had barely arrived when she was carried off to the little Baghdad suburb of Alwiyah. At the time, this was the centre of the British community in Iraq and for Agatha Christie′s countrymen it had the advantage of only having to socialise with other Britons, meeting for tennis afternoons, bridge games, cricket and picnics. It was just like Britain, but warmer and with cheaper staff.

But this was exactly what she had come to Iraq to avoid. And she now felt trapped in the "land of the memsahibs" and started searched desperately for a pleasant escape route. And this opportunity came to her in the form of Katharine Woolley.

The occasionally eccentric wife of the archaeologist Leonard Woolley always accompanied her husband to Ur on his excavations there. She had read Agatha Christie′s novels with great enthusiasm and now made it her business to lure the famous writer out to the excavations. Agatha Christie was so delighted by Ur and life on the dig that she visited the Woolleys again the next year.

On this occasion she met her second husband, the archaeologist Max Mallowan, whom she married the same year. For a season, Max Mallowan went to join Reginald Campbell Thompson′s excavation in Nineveh, before he felt ready to lead his own digs. 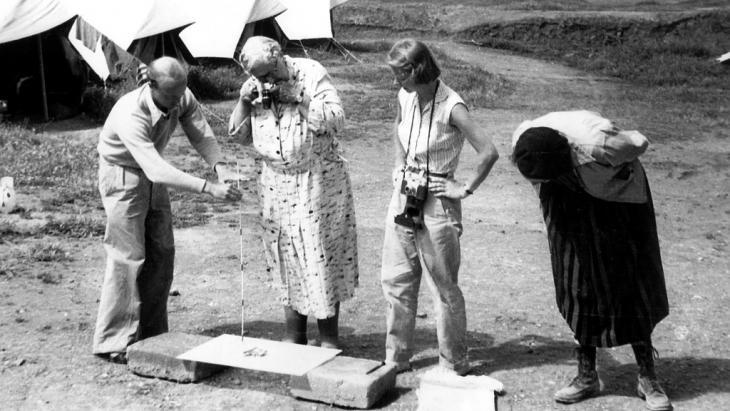 Accompanying her husband Max Mallowan in Mesopotamia: the novelist Agatha Christie (centre) photographs a tiny ivory figurine at the Nimrud dig in Iraq. As the wife of archaeologist Max Mallowan, Agatha Christie travelled extensively within the Middle East, even making her home there for a time. Not only did she pen many of her typical portrayals of English country life in northern Iraq, but also a handful of detective novels set in the Orient

Over the 1930s, the Christie-Mallowans established an annual rhythm, spending half the year on excavations in northern Iraq and above all in northern Syria, Agatha Christie writing, Max Mallowan digging, while the second half of the year was spent in London or in one of their country houses. There, the finds were evaluated and made public.

The novels of the 1930s were the high point of Agatha Christie′s career. They included classics of British crime fiction like And Then There Were None and The Murder at the Vicarage, in which Agatha Christie introduced the popular character of Miss Marple. But the Middle East also became the setting for some typically British detective stories.

The famous Murder on the Orient Express may play out primarily in the Balkans, but by the time of Murder in Mesopotamia, the action had been fully transferred to the Middle East. Even so, Iraq, Palestine, Egypt and Morocco merely provide the setting for the stories. The protagonists are still Europeans – mostly travellers in these countries. The cultural identities of the region are always seen through the filter of these people and Agatha Christie often uses a character′s reaction to something foreign to tell the reader about their personality.

In stark contrast to the detective stories is Come, Tell Me How You Live, an autobiographical report Agatha Christie wrote about her time in the Middle East in the 1930s.

The Second World War put an end to Max Mallowan′s excavations and separated the couple for the time being. While Max was put to work in Cairo and Tripoli on account of his command of Arabic, Agatha did war work in a hospital in London. She found living alone in war-stricken London depressing and kept her spirits up in the evenings by writing about her experiences in Archpahiya, Chagar Bazar and Tell Brak.

What makes Come, Tell Me How You Live so special is that, unlike other travellers of the time, Agatha Christie had no political or professional goals. She was simply the wife of an archaeologist, born with a remarkable gift for observation and a talent for storytelling, who had spent a lot of time in Northern Iraq and Northern Syria. The description of the region, the people and their cultural differences, be it Arabs, Kurds, Yezidis or Armenians (who did a lot of work on archaeological digs at the time), are therefore remarkably nuanced and free of the Orientalist thought patterns of the period.

Shortly after the Second World War, Max Mallowan started work on the biggest project of his career: the excavation of the Assyrian city of Nimrud in Northern Iraq. And so for ten years, from 1949 to 1959, Nimrud became Agatha Christie′s "hometown" in the Middle East. For the first time, she had her own little annex on the expedition house - the "Beit Agatha". Filled with modern Iraqi art, it served as her study. Here she began writing her memoirs, which she would go on adding to for more than twenty years.

The excavations in Nimrud drew hordes of fascinated visitors, first and foremost because of Agatha Christie′s presence, as well as interest in Max Mallowan′s unusual finds. Nimrud was also known in archaeological circles as the most comfortable site around, not least because Agatha Christie contributed to the comfort from her own pocket.

But her involvement in her husband′s excavations was not limited to an improvement in the general living conditions on the expedition; now and then, she also passed the time by cleaning and cataloguing his finds. From the very start of her writing career, she had been of the opinion that it was impossible to spend the whole day writing: after all, a writer′s most important task was thinking.

When working on earlier novels, she had marched across an autumnal Dartmoor every afternoon and now she went to work on her husband′s finds with cotton wool buds, day cream and cameras. We can therefore assume that a not inconsiderable number of the surviving relics from Nimrud were once cleaned by no less a person than Great Britain′s most famous female author.

Home
Print
Newsletter
More on this topic
Historical travelogues by women: Lugging a piano to KhartoumThe German archaeologist and explorer Max von Oppenheim: Enchanted by the myth of the OrientGertrude Bell: Queen of the desert
Related Topics
Archaeology, Armenians, Colonialism, Islam and the West, Kurds, Literature, Travels in the Orient, Yazidi
All Topics

The clashes in Baghdad between supporters of Muqtada al-Sadr and pro-Iranian militias show that an intra-Shia power struggle is in full swing. An analysis from Cairo by Karim El- ... END_OF_DOCUMENT_TOKEN_TO_BE_REPLACED

Bachtyar Ali sends the hero of his latest novel – "Mein Onkel den der Wind mitnahm" – literally flying. Jamshid is so thin after his years as a political prisoner that a gust of ... END_OF_DOCUMENT_TOKEN_TO_BE_REPLACED

In this essay, renowned Lebanese journalist and writer Hazem Saghieh asks whether the Arab Levant, which stretches from Iraq in the east to Egypt in the west, will remain an ... END_OF_DOCUMENT_TOKEN_TO_BE_REPLACED

Climate change is taking its toll on communities in Iraq. Younes Ajil turns on the tap in his home but nothing comes out. Villages in the south of the drought-hit country are ... END_OF_DOCUMENT_TOKEN_TO_BE_REPLACED

END_OF_DOCUMENT_TOKEN_TO_BE_REPLACED
Social media
and networks
Subscribe to our
newsletter