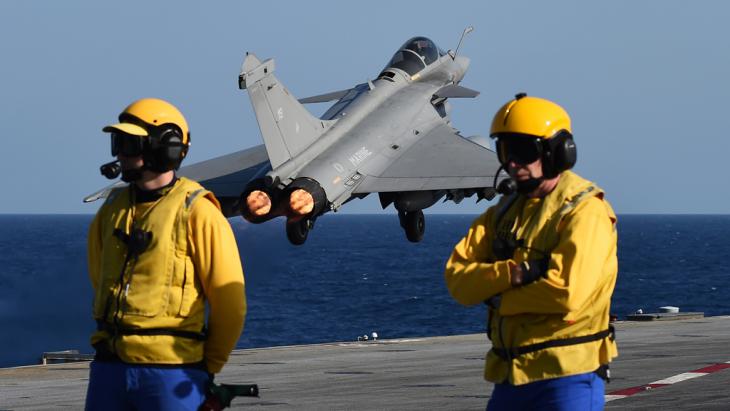 Solidarity yet no strategy

Western airstrikes will fail to have any significant impact on the terrorist militia as long as the Syrian rebels, prevented from focusing their efforts on the jihadists by the ongoing offensive staged by Assad′s regime, have to defend themselves simultaneously against IS and Assad. A commentary by Bente Scheller

For years the view was that the situation in Syria was too complex to intervene there, but this appears to have been forgotten in the wake of the Paris attacks. A no-fly zone, repeatedly rejected, appeared too risky to Western nations because they did not want to enter into military engagement in Syria.

But such arguments and considerations appear to have been extinguished in view of a terrorist threat on our own doorstep. Military measures against IS are being discussed in great haste. And the decision has now been taken – in Britain first, and now in Germany – to provide military support to the mission.

Solidarity with France, indeed, efforts to assemble the broadest possible front against terrorism, is not in itself wrong. Considering, however, the long political friendship between the two nations, it is nevertheless astonishing that the search for a political response in particular, which would address the root of the problem, is taking a back seat to hasty decisions on military deployment.

Foreign Minister Frank Walter Steinmeier did explain that military actions were embedded within a broad-based political process endeavouring to secure peace in Syria. But thus far, this process has only made progress on paper.

No political solutions to solve the conflict

There have not even been any indications that the UN Security Council intends to actually realise even sections of the resolutions passed on Syria. Hundreds of thousands of people in besieged areas are in an increasingly desperate situation without access to humanitarian aid, barrel bombs are falling on residential areas and local ceasefire agreements have made no progress.

At the same time it remains vague just how airstrikes against IS in Syria are going to increase security in Europe. For a start, it has not been explained exactly how the link between the Paris attackers and IS functioned. They apparently needed neither significant financial nor logistical support from the Middle East to carry out the attacks. They may have been inspired by IS, or even carrying out orders from the organisation – but this is not something that can be stopped by airstrikes.

Even if bombardments weaken IS and lead to a recapture of territories gained by the terror organisation, this would by no means prevent perpetrators in Europe from being inspired or recruited. 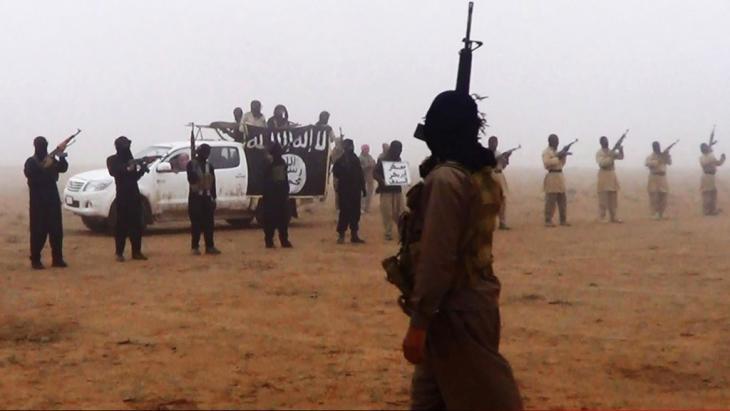 "As urgent it may seem to do something to oppose the terrorist threat, it is just as important to think before we act. Otherwise the battle against IS will not only fail, but also the way in which it is conducted will inflict further unforeseeable damage," asserts Bente Scheller

In addition, within the past year, coalition air attacks against IS have weakened the organisation, but not significantly altered the map. Whether Sinjar or Kobani: these are places ultimately freed by ground troops.

As no one wants to send in ground forces, we are reliant on local actors. It therefore appears particularly grotesque if Western nations can reach agreement on intensifying airstrikes, while at the same time allowing the Syrian air force and Russia to continue weakening those who could do just that and put up resistance on the ground.

The regime not only views IS as terrorists, but also all rebel groups. It continues to concentrate on attacks in zones controlled by rebels, not IS. Russia is also evidently operating according to the same logic, flying most of its air attacks far from IS controlled regions.

Western airstrikes will fail to have any significant impact on the terrorist militia as long as the Syrian rebels, prevented from focusing their efforts on the jihadists by the ongoing offensive staged by Assad′s regime, have to defend themselves simultaneously against IS and Assad.

Worse still: the hideous idea of a "marriage of convenience" with Assad has again been doing the rounds since the Paris attacks, as though the Syrian leader can save the day. Defence Minister von der Leyen has so far expressed herself cautiously: she will not rule out the inclusion of regime troops.

This throws up several questions at once. Despite a massive volume of support from abroad, the Syrian army is having trouble asserting itself. Sporadic victories against the rebels, made possible with the support of Hezbollah and other foreign fighters in northern Syria, have been celebrated as successes. Meanwhile the regime lost the central Syrian city of Palmyra to IS. In this respect it is from a purely technical point of view doubtful what gains could be made through the involvement of regime forces. 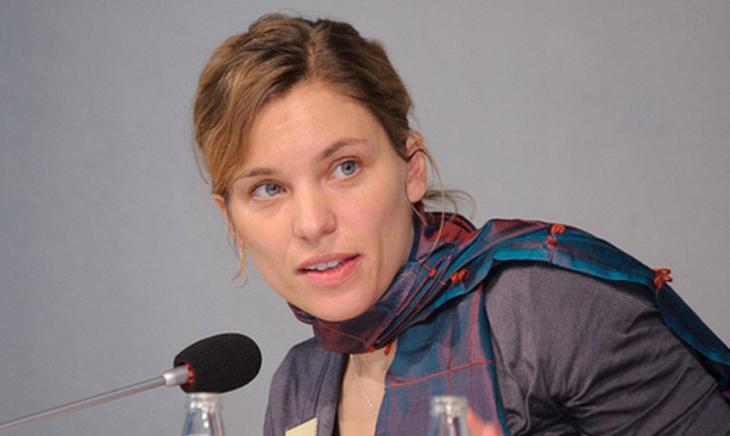 Bente Scheller became the director of the Heinrich Boll Foundation in Beirut in 2012. She previously led the foundation's office in Afghanistan. Her book "The Wisdom of Syria's Waiting Game: Foreign Policy Under the Assads" was published in February

More importantly, however, what political losses will be incurred, should we enter into such an unholy alliance? Aside from the reluctance to open the debate over the fact that in doing so, we would be supporting the murderous activities of a despot, from a purely pragmatic standpoint, such co-operation would under no circumstances be purpose-oriented, but would rather stand in the way of the fight against IS.

IS captured most of its Syrian territory from rebels. In other words: rebels initially liberated the areas from Syrian regime forces. They were then overrun by IS.

So if the Syrian regime is now to be integrated into the fight against IS, this would potentially make it possible for the regime to return to precisely the areas where, even after the rampages of the army and its allied militia were brought to an end, the establishment of civilian infrastructure had been prevented by the air force.

A policy that directly or indirectly bolsters the regime, while at the same time relying on its opponent to conquer IS, is therefore a dangerous illusion.

Moreover, the discussion over military strikes against IS pays little heed to the social context in which they are taking place. In this regard, we should not only be thinking about the civilian victims of the attacks, but also the impact of attacks on IS oil trading - a subject that recently became a focus for debate - to cut one of the terror militia's main sources of income.

Oil is undoubtedly an important source of revenue, but most of this continues to be consumed within Syria itself. A shortage would drive prices up and further increase the suffering of a civilian population already under considerable pressure.

As urgent it may seem to do something to oppose the terrorist threat, it is just as important to think before we act. Otherwise the battle against IS will not only fail, but also the way in which it is conducted will inflict further unforeseeable damage.

Home
Print
Newsletter
More on this topic
Chronicle of a war foretold: Redefining the "Syrian" conflictThe Syrian conflict: The illusion of a political solutionThe Syrian conflict and the advance of ISIS: Assad and the myth of the lesser evil
Related Topics
'Islamic State' | IS, Assad regime, International terrorism, Islam and the West, Jihadism | Jihadists, Kurds, Syrian Civil War, Syrian opposition
All Topics

The past enthusiasm of the Egyptians lives on in the Iraqis of today. But just as they were nine years ago in Cairo, current prospects in Baghdad are dim. A comparison by Birgit ... END_OF_DOCUMENT_TOKEN_TO_BE_REPLACED

Insults directed against Egyptian President Abdul Fattah al-Sisi have been particularly prominent among the hundreds of chants by Arab protestors in Algeria, Sudan, Iraq and ... END_OF_DOCUMENT_TOKEN_TO_BE_REPLACED

Beyond the latest crisis with Iran, current U.S. Middle East policy is nothing if not chaotic. Many fear that the Trumpian approach could irreparably damage future U.S. ... END_OF_DOCUMENT_TOKEN_TO_BE_REPLACED

Looking outwards with the knowledge from within: a conversation with the Iraqi writer Sinan Antoon on the future of his homeland. Interview by Lena Bopp END_OF_DOCUMENT_TOKEN_TO_BE_REPLACED

The terror attacks in Paris, Brussels and Berlin were all carried out by men radicalised in jail. In Germany, politics and the judiciary are trying out new approaches to prevent ... END_OF_DOCUMENT_TOKEN_TO_BE_REPLACED

The "maqama", a classical Arabic form of prose-poetry, is still almost unknown in Germany – as is the name of the 11th-century Baghdad poet Ibn Naqiya. A new translation has the ... END_OF_DOCUMENT_TOKEN_TO_BE_REPLACED
Author:
Bente Scheller
Date:
Mail:
Send via mail