Ajvatovica, the largest Muslim pilgrimage in Europe, dates back over 500 years. Legend has it that Ajvaz Dedo, an Anatolian dervish, prayed to God for water during a period of drought for 40 days and nights in front of a huge rock near the town of Prusac in what is now Bosnia and Herzegovina. On the last day, he fell asleep, only to find when he awoke that the rock had split in two, releasing a stream of water. By Konstantin Novakovic 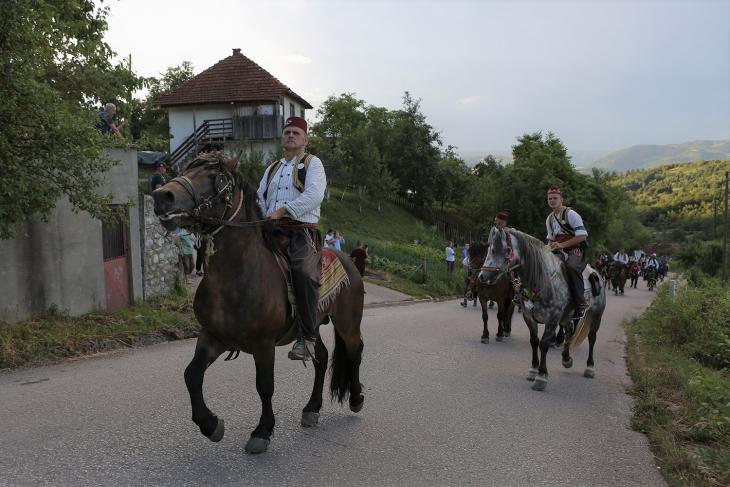 Every year in June, Prusac, a small town in central Bosnia and Herzegovina, hosts the "Days of Ajvatovica". On the first day, hundreds of horsemen from all over the country gather in the town. Banned by the Yugoslav government in 1947, the pilgrimage was revived in June 1990. Today, it is a major religious event 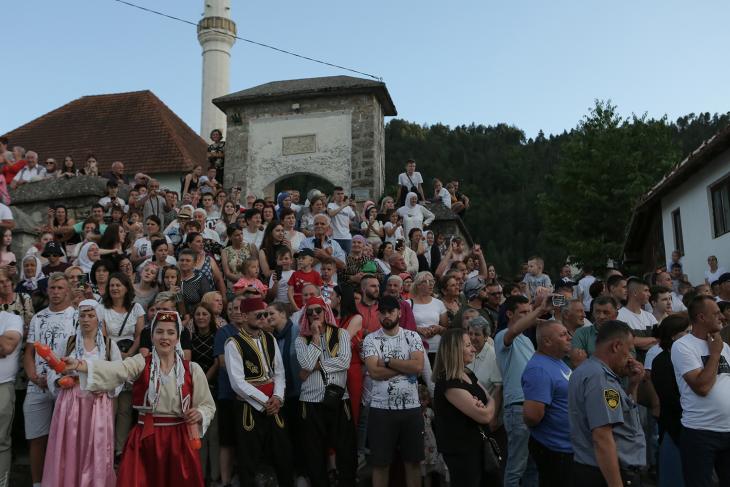 The horsemen are greeted by crowds of visitors and locals who have come to watch the procession. Ajvatovica is allegedly the largest Muslim pilgrimage in Europe. It takes place seven weeks after Saint George's Day, which means that it is not related to the Hijri calendar, indicating its pre-Islamic roots 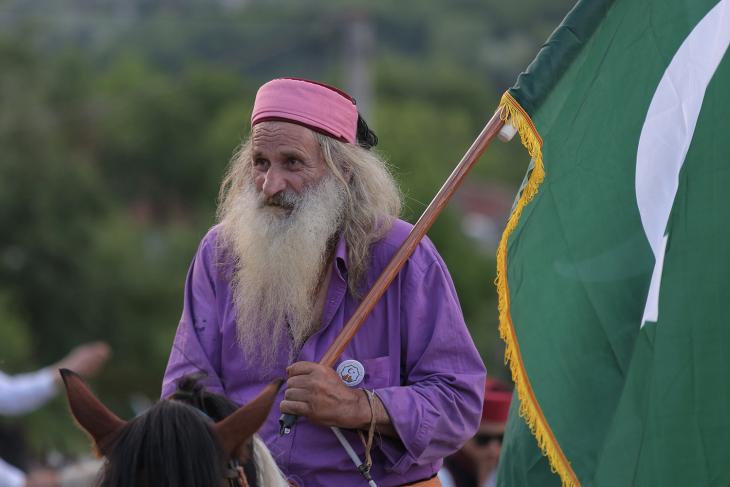 An elderly dervish from Srebrenica arrives on horseback bearing a flag. Dervishes from a variety of "tariqas" from all over Bosnia travel to Prusac for Ajvatovica. The pilgrimage fosters the inherent connection between Sufism, local traditions of sainthood and mainstream Islam 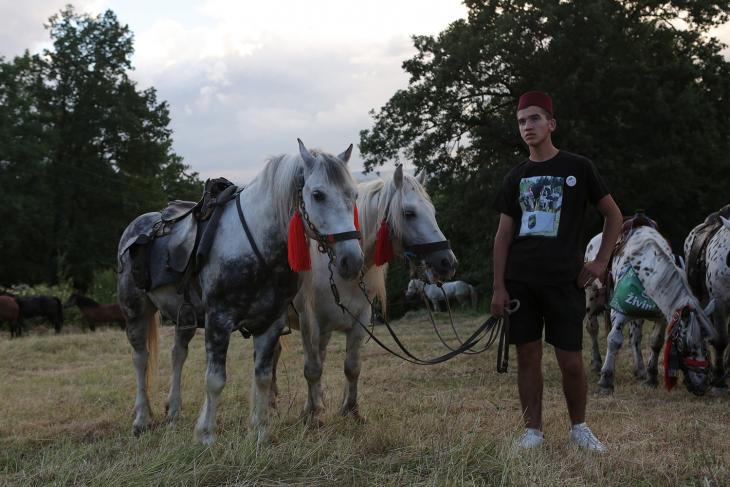 Hundreds of horses and their owners spend the night on the meadow in Prusac. Until the mid-1990s, guests used to stay in local homes. As the pilgrimage grew more popular, the Bosnian army began to erect tents to accommodate guests, horsemen and their horses 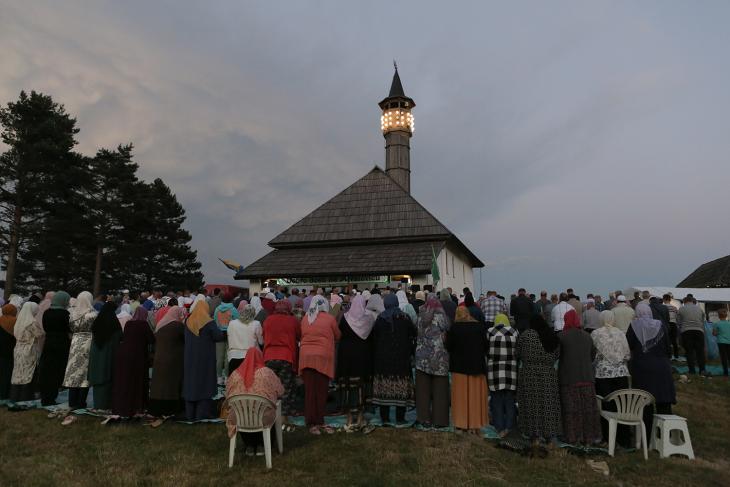 After sunset, the evening prayer is said in the open at the communal place of prayer outside the mosque known as "musalla". Later that evening, the communal "dhikr" attended by sheikhs and dervishes is held in the same place 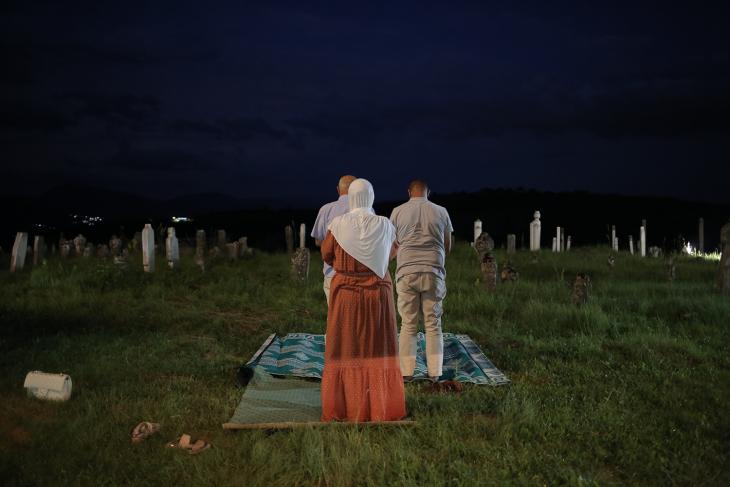 A family prays at the old cemetery next to the tomb of Hasan Kjafija Pruscak, a local scholar and benefactor from the 16th century who initiated the visit to the rock and renewed Ajvaz Dedo's water supply system 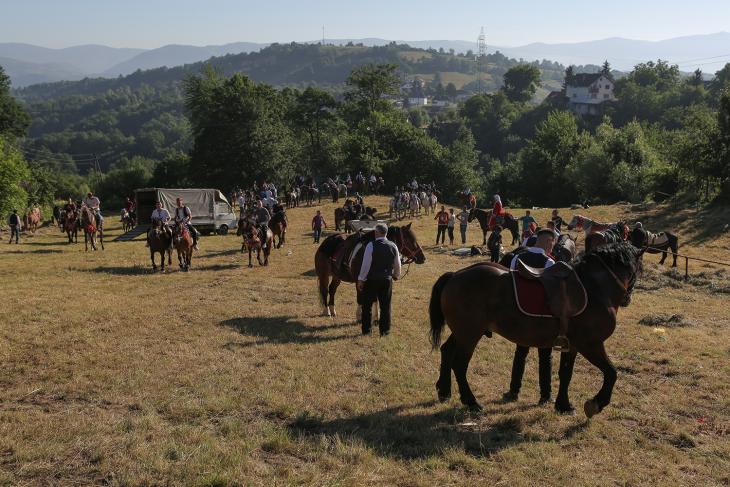 Early on Sunday morning, the horsemen prepare their horses for the final stage of the pilgrimage: up Suljaga Mountain to the place where the split rock of Ajvaz Dedo is located. It is also known as the "doviste", or site of supplication, and is a highlight of the Ajvatovica pilgrimage 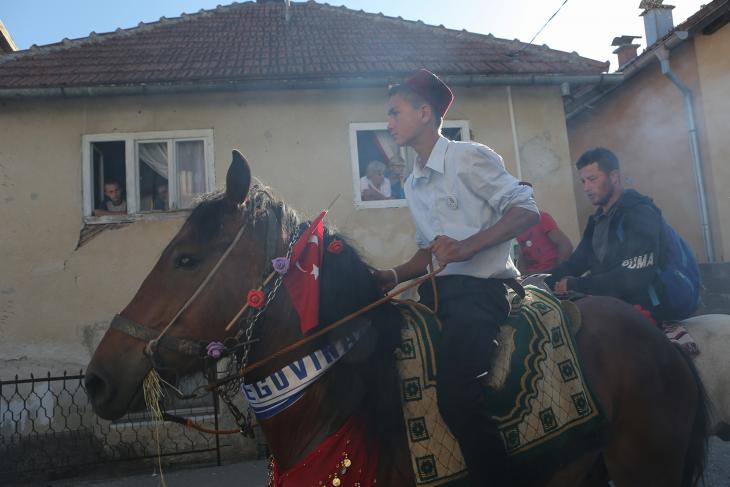 The equestrian procession passes through the town once again, greeted by thousands of onlookers. From here, it continues to the doviste, which is located uphill, 7 km outside Prusac. Dovista are places that are linked to local legends, where religious gatherings are held and congregational prayers said. Some of them date from pre-Islamic times 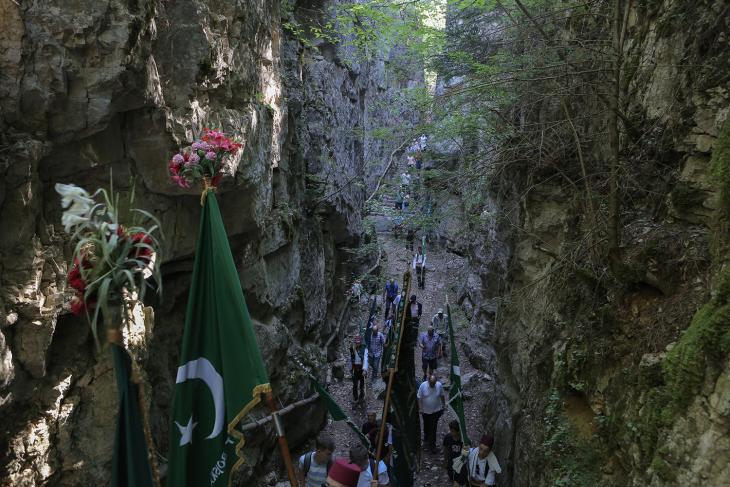 A procession of religious leaders and flag-bearers passes through the narrow chasm of the Ajvaz Dedo rock. The chasm is 74 m long, 30 m high and only several metres wide. The shape of the rocks on both sides of the chasm seem to suggest that they once formed a single rock, before it miraculously split in half. Shortly after the miracle of Ajvaz Dedo, the town's water supply was secured from this source using 3,560 wooden pipes 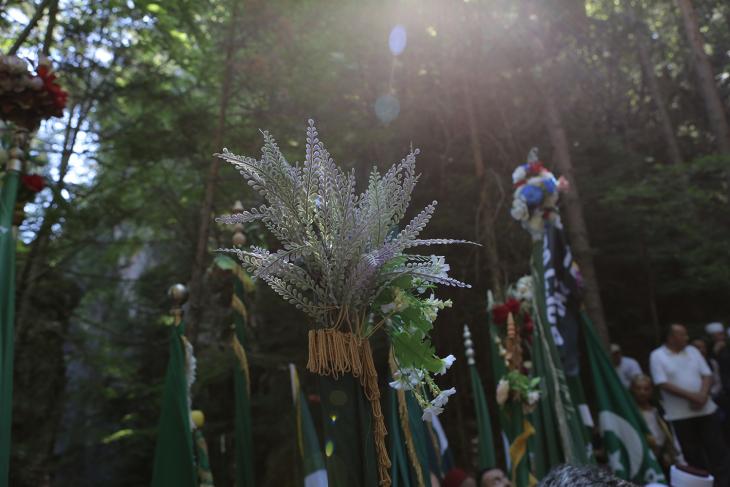 The flags represent various "dzemats" (Islamic congregations) and are carried by specially chosen men. Pilgrims compare the passage through the rock, where the temperature contrasts greatly with the conditions outside, to the As-Sirat bridge, which Muslim believers must cross to enter Paradise 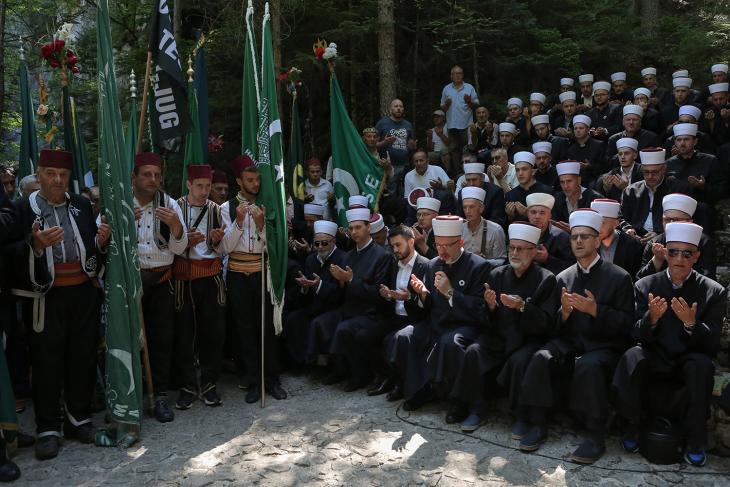 A ritual that is a key part of Ajvatovica occurs when the procession passes through the chasm of Ajvaz Dedo: upon arriving at the top, the religious leaders stop and recite the sura of victory, followed by prayers appealing for rain 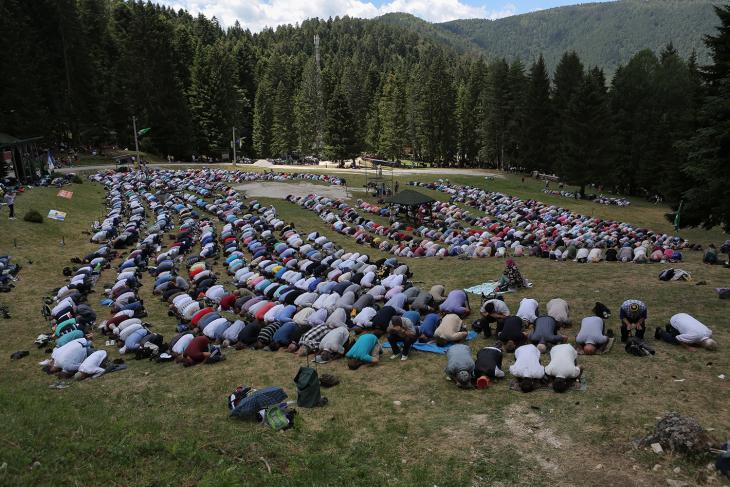 The procession concludes on the Ajvatovica meadow. The event ends with the communal "zuhr" (midday) prayer 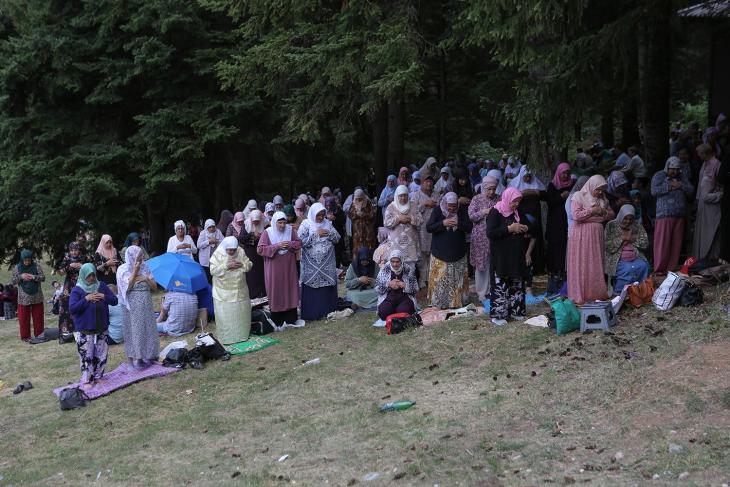 Separate areas, which are cordoned off from the men, are reserved for female pilgrims during the communal prayer. The prayer is led by the Grand Mufti (Reis-ul-Ulema) from the Islamic community of Bosnia and Herzegovina 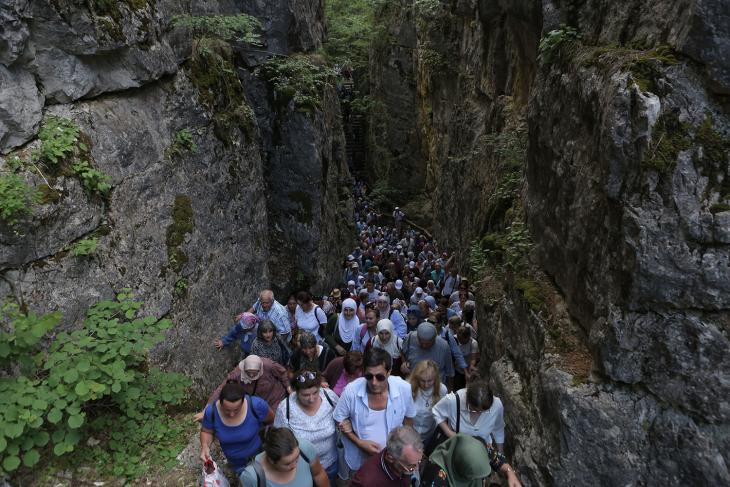 Pilgrims pass through the split rock of Ajvaz Dedo on their way back to Prusac after the ceremony. People often take small pebbles and stones from this place as a sign of divine blessing ("barakah"), hoping they will bring good luck

END_OF_DOCUMENT_TOKEN_TO_BE_REPLACED
Social media
and networks
Subscribe to our
newsletter