An Internal Clash of the Civilisations?

Few other television channels have received such intense media attention as the English version of Al Jazeera when it was launched one year ago in 2006. Has the channel lived up to expectations? Stephanie Dötzer reports 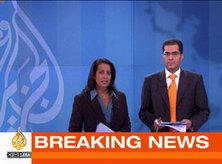 Al Jazeera English aired their first programme on 15 November 2006 with Shiulie Ghosh, left and Sami Zeidan, right, as their presenters

​​Even a full year after its launch, the daily stream of visiting journalists from all four corners of the globe has not abated in any way. Most of them cannot hide their admiration for what is the most modern newsroom in the world.

The statistics are impressive: over 40 different nationalities work at the station's headquarters in Doha alone. The channel broadcasts to approximately 100 million households. The feedback from viewers – from Malaysia to Mexico – is overwhelmingly positive; the disappointment in the Muslim community, however, is considerable.

This could seal the fate of the channel because as yet, several fundamental issues remain unresolved. Should the English-language channel explain the Arab view of the world to the West? Should it speak on behalf of the South? Should it build on the reputation of the Arabic channel? Or should it prove that Al Jazeera is not as bad as the American government claims?

The hope is that Al Jazeera English will be all of this and more simultaneously. That being said, the debate as to which of these aims is the most important continues to rage behind the scenes.

There are two opposing parties. For the first group, Al Jazeera English is primarily an international news channel in the style of the BBC and CNN, but one which reports more than these two channels from countries that are so often neglected. As far as this group is concerned, the objective is to reach large numbers of viewers in Asia and Africa.

The second group pursues very different aims: for them, Al Jazeera is about fulfilling the hope of being able to wake people up, particularly those in the West, whose attention has been distracted by the mainstream media away from the issues that matter towards less important, phoney issues.

Instead of going along with stereotypes, they would like to give a voice to people in Gaza, Beirut, and Baghdad, explain contexts and background issues.

It is very easy to find out who belongs to which group, because it frequently has much to do with where the employee in question comes from. British citizens, who make up the majority of staff members in Doha, do not feel personally affected by the conflicts in the Middle East.

Many Arabs, on the other hand, joined the crew so that they could at last explain their points of view to those who don't understand what is going on in the Near East.

This closely resembles the suggestion, which was made during the second intifada and the Iraq war, that Arabic stations should be translated into English so that the West could understand why Muslims were so angry. But a straightforward translation is not the answer. 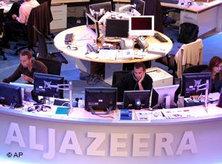 Walking a journalistic tightrope between a "Western" and an "Arabic" audience: Al Jazeera English

​​"We need different words to express the same thing," says Ibrahim Helal, one of the directors of Al Jazeera English. This is why the English-language channel uses a different vocabulary from the original Al Jazeera. This is a bone of contention between the two channels because those who work for the Arabic channel feel that their ideals have been betrayed and view the English-language channel with mistrust.

The controversy could, however, inadvertently be good for journalism, because the debates and discussions among colleagues in the canteen are nowhere as passionate and lively as they are at Al Jazeera. What is Islamist? Who is a resistance fighter, who an extremist, who a terrorist? And is one a martyr because one was killed accidentally by a stray bullet?

Criticism from both East and West

It is up to the journalists alone to clarify these definitions. Although the emir of Qatar is the channel's only financial backer, he bears no influence on the channel's content – probably in the hope that the English-language channel will acquit Al Jazeera of the unfounded yet stubborn charge that it is merely a mouthpiece for terrorists.

This is a subject about which the British get very upset too. More channel time is devoted to Bush, they claim, than to Bin Laden. Moreover, strange as it may seem, the channel has been criticised by both the American government and al-Qaida alike.

Steve Clark, head of news at Al Jazeera English, has no trouble at all defending the channel. "I have worked for western television channels for twenty years, but I have never experienced journalism that is as free as it is here."

That being said, journalistic freedom does not release Al Jazeera English from other constraints. If the channel were to orient itself towards its legendary sister, it might deliver what non-Arabic-speaking Muslims expect from it, but it would have great difficulty establishing itself on the North American television market. At present, no North American cable network operator dares to broadcast Al Jazeera.

However, if it orients itself away from its Arabic sister, it will lose the trust and confidence of those viewers who watch the channel because they want something they can really get their teeth into after the mish-mash served up by the mass media.

Success in this case means walking a journalistic tightrope. However, if any channel can manage it, Al Jazeera can.

Arab Satellite Media
Al Jazeera – The Enigma from Qatar
On 1 November 1996 the Arab news network al-Jazeera started broadcasting from Qatar. Its bold news coverage sent shockwaves through the Arab world, and soon became the target of stinging criticism from both Western and Arab governments. By Larissa Bender

Al-Jazeera's Lack of Clear Distance to Al Qaida
Protest against the Indictment of Taisir Aluni in Spain
Al Jazeera has heavily criticized the indictment in Spain of one of its reporters, Taisir Aluni, who is accused of supporting Qaida militants. With its emphatic indictment, the court condemned contact with the terrorist network, while Al Jazeera maintains that this is an appropriate means for obtaining exclusive reporting. By Victor Kocher

END_OF_DOCUMENT_TOKEN_TO_BE_REPLACED
Social media
and networks
Subscribe to our
newsletter