Al-Jazeera's Coverage of Salman Rushdie's Knighthood:
Reading into the Minds of Millions in the Islamic World!

Al-Jazeera did not treat the knighthood awarded to the Indian-born British writer Salman Rushdie as a literary or cultural item. Instead, it created a major political news story. A commentary by Fidel Sbeiti 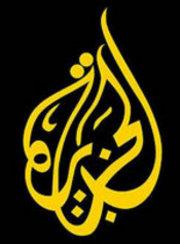 Al-Jazeera is offering its viewers what they would like to hear or read, enforcing its predominantly conservative public opinion, writes Fidel Sbeiti

​​The scenes of demonstrations and the chaos which the knighting of Salman Rushdie had triggered and the images of bearded men in Pakistan burning the British flag or pictures of the author Rushdie, as well as the shots of conservative Iranian students, probably paid by equally reactionary Iranian forces or its conservative branches, screaming and demanding the application of the fatwa issued by the head of their revolution, the late Khomeini in 1989 – promising to kill the writer – are the images al-Jazeera displayed to cover the news item on its network and electronic site.

The network has been running these selected snippets each and every day to suggest that such protests are taking place across the entire Islamic world instead of the few Iranian and Pakistani provinces.

Such coverage seeks to highlight the opinion that the prize defames Islam and that the British monarchy had been wrong in choosing a writer of such stature as Rushdie. The accumulative effect is incendiary supported as always by the availability of an Arab "intellectual" ready to express these views across any of its stations.

This is the first sign of how a literary or cultural event metamorphosed into a major political news item. Al-Jazeera, on its television channels and electronic site, covered the initial announcement of Rushdie's knighthood by emphasizing a negative angle to the story.

It omitted to mention, for example, the author's literary output or how much of his fiction highlights the plight of many immigrants of East Asian descent in the West.

It was as if the official position of the channel with regard to Rushdie was identical to that of Pakistan and Iran; in other words, the network adopted the position of a restrictive Islam.

One need not mention here that the viewers, to whom this slant was directed, had not read the Satanic Verses because the novel has been banned in their own countries thus inciting further disgust over and above their ignorance and anger.

The initial release reads as follows: "The British Royal Monarch has announced today the granting of the Indian-born British writer, whose novel The Satanic Verses has caused many protests throughout the Islamic world, the title of knighthood.

The honour was also been granted to a Russian spy who worked on behalf of the British secret service as well as to a British cricket player and an Australian comedian."

De-constructing this news release – which al-Jazeera repeatedly broadcasted – would uncover the network's bias to its audience instead of to an objectivity aspired in covering a literary or cultural news item.

First, the item treats Rushdie as a British citizen born in India as if to imply that his Indian birthplace does not mean that he is still Indian or Muslim.

The news item, after identifying the source of the prize, sought to remind its viewers of Rushdie's past. Thus the knighthood was mentioned in conjuction with protests in the Islamic world.

Al-Jazeera then goes on to inform its viewers that the same honour was granted to a spy, a cricket player and an Australian comedian. This order reveals the sarcastic attitude with which the network sought to demean the value of the prize.

It wants us to believe that the prize is irrelevant since it was granted to those professions that normally are not recognizable categories.

The wording cites these professions without naming its recipients. A Russian spy in the service of the British monarchy is a traitor as all spies are according to those who have composed this report and to the viewers of the network.

As for the cricket player, he is an athlete whose prize al-Jazeera seeks to politicize to the max since sports appears to take second place to politics. The Australian comedian, in these dark Islamic ages and the media politics that al-Jazeera adopts, confirms essentially the position that the prize has no relevance. 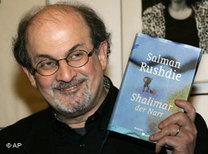 ​​Prizes and titles are only bestowed upon those who are serious; one cannot ignore the underlying religious assumption that "laughter kills the heart" is at the heart of this slant in the worlds of al-Jazeera and restrictive Islam.

One can imagine in following the Jazeera coverage to the Rushdie story as it cases it in the format of angry popular reactions and as it beams it across its screens and electronic site that its audience would agree with the coverage.

In other words, the network is offering its viewers what they would like to hear or read, enforcing its predominantly conservative public opinion. The audience at large participates through phone-ins as well as sending in internet messages expressing their views of the prize and the writer.

One can safely assume that most of them did not read The Satanic Verses – except maybe for its title (it is said that Khomeini did not even read it when he issued his fatwa); nor did they read the Islamic texts which Rushdie alluded to in his novel or the two books written since1989 by the Syrian thinker Sadiq Jalal al-Azm entitled The Mentality of Prohibition and Post the Mentality of Prohibition where he discusses the novel and the fatwa while offering his readers translations of chapters into Arabic.

Most of those who belong to the Salafi school of thinking do not approve of religious (and intellectual) freedom that has characterized some periods of Islamic history such as the Abbasid era. Instead, most of their opinions in this matter is derived (and supported) from media outlets like al-Jazeera and from public opinion often originating in religious schools in Pakistan and Iran.

They criticize – these viewers and readers – the British Queen as well as issue threats and warnings to the Indian-born British writer. Some even include their own cultural (and historical) analysis believing that an ongoing Crusade intends to destroy the Islamic faith by giving prizes to those who persevere in such endeavour and how this prize in particular demonstrates one of the many Zionist-Crusade conspiracies seeking to destroy the region.

Others foresee Britain itself becoming an "Islamic State" in the near future (if God wills it). Al-Jazeera chooses to publish on its electronic site many of the strong worded opinions and arguments against the prize and its winner – a conscious choice on the part of its editors who have professional discretion in choosing not to disclose these views.

One such response, for example, reads (the quotes here are verbatim): "The hands that endorse the emergency government of Salam Fayyad are the very ones that have given the heretic Salman Rushdie this title.

What goodwill do these people have for Islam or Muslims?" Another, which I chose at random out of thousands received commenting on this news item alone reads:

"The fatwa of the Imam still stands and it is not correct that the initial threat is invalidated by the death of the scholar who issues it. No one has the right to cancel the fatwa. The Imam has fired a bullet in the right direction and it will reach its target sooner or later!"

In the Islamic world today, the audience is catching up with al-Jazeera's restrictive atmosphere so much so that reading or listening to a news item on this channel is like reading the minds of millions in the Islamic world and vice versa. The very thought is too horrible to contemplate!

On Salman Rushdie, a Bridge-builder who Polarises
The Return of the Burning Effigies
The announcement that Salman Rushdie is to be awarded a knighthood has caused diplomatic and public outrage in Muslim countries. But these rituals do not necessarily have anything to do with the reality of the situation, says Angela Schader

Protests against Salman Rushdie's Knighthood
A Satanic Tactic
In the case of Iran and Pakistan, the citizens are being unscrupulously manipulated in order to distract people's attention from both domestic and foreign policy problems, says Peter Philipp in his commentary

Arab Satellite Media
Al-Jazeera – The Enigma from Qatar
On 1 November 1996 the Arab news network al-Jazeera started broadcasting from Qatar. Its bold news coverage sent shockwaves through the Arab world, and soon became the target of stinging criticism from both Western and Arab governments. By Larissa Bender

END_OF_DOCUMENT_TOKEN_TO_BE_REPLACED
Social media
and networks
Subscribe to our
newsletter