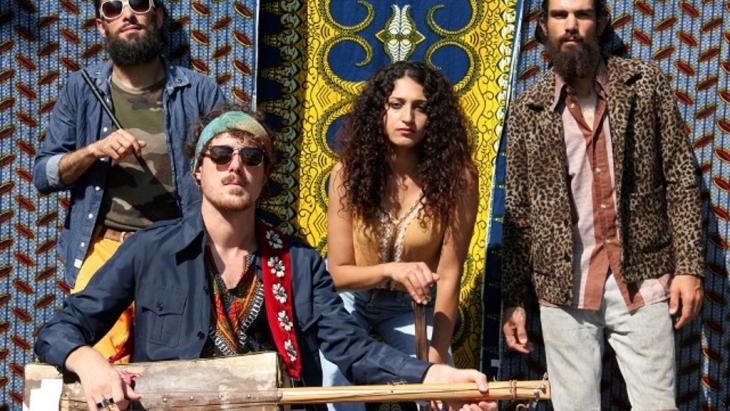 "Nayda!" is a concept anchored in Moroccan culture at least since the turn of the millennium. At the time, the royal transition from the autocratic King Hassan II, who let opponents rot in his dungeons, to his more moderate son, Mohammed VI, resulted in the liberalisation of society. It also provided a massive boost to the music scene. Rappers, hard rockers, and jazz musicians joined forces in the Nayda youth movement. Morocco's minorities, such as the Berbers and the Gnawa, descendants of former black slaves abducted from sub-Saharan Africa, were now able to make a musical impact.

"In the Moroccan-Arabic dialect of darija, 'Nayda!' has a dual meaning. It can mean both 'to party' and, alternatively, an intellectual awakening – where one adopts an upright attitude and no longer simply follows the herd," says Yousra Mansour, the front woman of Bab L'Bluz.

The exuberant singer grew up in the libertarian spirit of Nayda. Her parents would listen to a mix of Led Zeppelin, Michael Jackson, and classical Arab-Andalucian music. Every year, she makes the pilgrimage to Essaouira to help out at the world-renowned Gnawa festival.

Power trio in the spirit of Jimi Hendrix's bands

"I became more and more captivated by this music," she recounted in interview with Qantara.de. This is hardly surprising when one reflects upon the swirling incantation ceremonies typical of Gnawa. "In 2017, I began to play the guembri, the bass lute of Gnawa music and was asked to participate in a Gnawa jazz project in Marrakesh." There she met the Frenchman Brice Bottin, and along with the drummer Hafid Zouaoui and the flautist Jerome Bartolome, they formed the quartet Bab L'Bluz.

"We see ourselves as an expanded power trio in the spirit of Jimi Hendrix's bands. The basic energy is rock, but then there are the added elements from the Moroccan provinces, from Gnawa and Berber music, and from Mauretania's Hassaniya poetry," she says, explaining their mixture of styles. "Bab L'Bluz" means "gateway to the blues" and, of course, this refers to African blues, which is much older than its American brother.

It grabs you when listening to the album, for example in the ecstatic moon song "El Gamra" or the psychedelic "Ila Mata". Indeed, Bab L’Bluz stands out crisply from the many desert blues bands that merely revolve endlessly around the style's pentatonic scale.

One reason for this is its combination of the guembri with the smaller and one octave higher tuned awicha. They assume the roles of the electric bass and electric guitar found in a typical rock band, but have a much rougher and drier sound. Yousra Mansour's trance-inducing melismatic vocals draped in the hovering smoky sounds of the flute provide the overlay.

A certain degree of schizophrenia

"You can detect a certain degree of schizophrenia in the album," laughs Mansour. "We work on the raw material in modern Lyon, our second home, but the draft versions of the songs originate in Marrakesh, a city steeped in tradition and bustling with tourists."

Marrakesh, with its bewildering mixture of ethnic groups, sounds and smells, is also regarded as the "gateway to the desert". The Sahara wind continuously blows through the songs of in Bab L'Bluz.

"I hold the Hassaniya culture of Mauretania in great esteem," says Mansour. "One song derives from the Tebraa poetry of Mauretanian women, who, living in a very conservative and patriarchal society, developed their own special lyrics of love bearing secret messages to those they revered."

In recent years, according to Mansour, women have finally won their place in the Moroccan music industry. Yet, despite all the cultivation of its image in Europe, the country's leadership has moved backwards domestically with respect to the concerns of women.

The untamed musical legacy of the Nayda movement

Although the King, regarded as a conciliator, managed to curb protests during the 2011 Arab Spring, a new spirit of resistance formed in 2016 with the Hirak El-Shaabi movement. It represents a response to the oppression of the Berber people in the Rif Mountains, to police violence, corruption, and restrictions placed on media critical of the government, which have resulted in the imprisonment of activists and journalists.

Yousra Mansour expresses herself cautiously: "Free artistic expression is not prohibited in Morocco. One is allowed to politely articulate one's irritation, but, of course, it is forbidden to incite violence." She also points out that there is no country on earth that is free from the mechanisms of manipulation. In Bab L'Bluz, the untamed legacy of the Nayda movement is therefore to be understood in musical, rather than political terms.

That said, the lyrics of their single "Ila Mata" are by no means only applicable to Morocco: "A fear has grown inside us, our brains have become imprisoned, and our differences have been criminalised. How long will this injustice prevail? How much longer will violence be glorified?"

Arab women played a leading role in the protest movement of 2011. Since then, ongoing social transformation has had a considerable impact on their lives. What is their assessment ... END_OF_DOCUMENT_TOKEN_TO_BE_REPLACED

Algerian scholar Said Djabelkhir rejects the charge of "offending Islam". In interview with Ismail Assam, he maintains that he has been wilfully misconstrued. At the same time, he ... END_OF_DOCUMENT_TOKEN_TO_BE_REPLACED

Business in the Moroccan city of Tangiers is booming due to its location at the nexus of global trade routes. But many locals are failing to reap the benefits. What they crave ... END_OF_DOCUMENT_TOKEN_TO_BE_REPLACED

Morocco and the European Union are at cross purposes when it comes to the Western Sahara. And, as Germany does not support Moroccan claims to the territory, a major conflict has ... END_OF_DOCUMENT_TOKEN_TO_BE_REPLACED

Recep Tayyip Erdogan, disappointed by the European Union’s reluctance to integrate Turkey into its ranks, has re-directed his country’s diplomacy toward the Maghreb and Africa to ... END_OF_DOCUMENT_TOKEN_TO_BE_REPLACED

Using a graphic novel to address a contentious issue like the Algerian war of independence may seem an odd choice, but new release "Algeriennes", translated into English by Ivanka ... END_OF_DOCUMENT_TOKEN_TO_BE_REPLACED
Author:
Stefan Franzen
Date:
Mail:
Send via mail

END_OF_DOCUMENT_TOKEN_TO_BE_REPLACED
Social media
and networks
Subscribe to our
newsletter