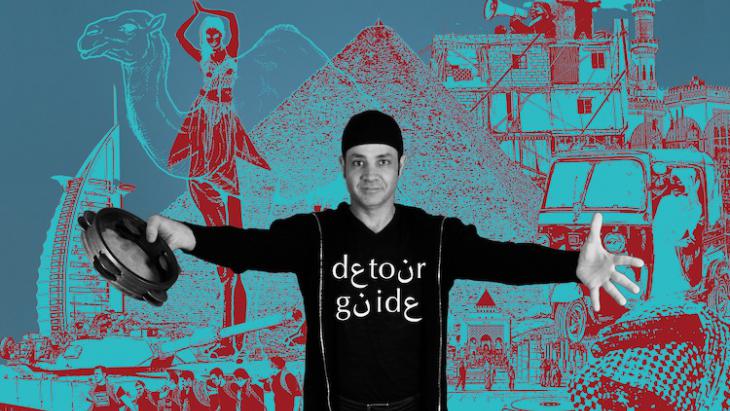 Stereotyping has been going on for a long time. We see something different and we try to make it easily definable by using simplistic, often demeaning, words describing something as complex as an entire culture, or race. In his newest release, ″Detour Guide″, Karim Nagi tackles this issue with humour and intelligence, while expressing pride in his culture and people

Nagi is more than just a musician. In fact he's a multi-media one man cultural ambassador. He does everything from running educational programmes in schools to teaching Arabic dance and music in both traditional and modern settings. While his work is entertaining and fun, everything he does has the underlying goal of breaking the mould of the stereotypical view the West has of the Arab world.

″Detour Guide″ is Nagi's guided tour through the Arab world. From the causes of the Arab Spring, which swept like wildfire through the Middle East, to the struggles of the immigrant trying to get by in America, he takes the listener on an incredible, eye-opening journey. Not only does he seek to enlighten people about the vibrant Arabic culture, he shows us the continuous uphill struggle the Arab world faces in the fight against cultural stereotyping.

Save for one song, "Heart Full of Cairo" (lyrics and vocals by Pleasant Gehman), Nagi wrote and provides narration/vocals for all of the tracks on the disc. The music is a mixture of traditional and modern; with electronics meshing seamlessly with drums and ouds. However, he doesn't just blend genres, he also works in street sounds and other found recordings to help create an atmosphere of reality.

While the disc is divided up into 12 tracks, in some senses it is one long collage of sound, with each song leading into the next. Although at first hearing it's a little overwhelming and is hard to pick out individual thoughts and ideas, if you simply relax, sit back and enjoy the ride, you will find yourself being drawn into Nagi's incredible creation.

Like all good tour guides he starts us off with a snappy introduction, "Take A Ride With The Detour Guide", a collage of sound and music driven by a pulsing drum beat tells us we're in for an exciting ride. As the title of the song and the CD imply, don't be surprised by sudden turns along the way, taking you in unexpected directions.

There's no easing into this journey either. He starts us off with the acerbic and satiric "Your First Arab". After asking us where we might have met our first Arab ("At a family run grocery?/At a gas pump?/Or in a doctor's office?"), Nagi then wonders if we asked him or her "Important, thrillingly existential questions like.../What is the secret to smooth hummus?/If a woman wears a head scarf, isn't it too warm?". However, the joking and teasing come to end with, "And then finally a question worth answering... why did everyone in multiple countries Revolt At The Same Time???".

Window on the Arab world

This leads into the disc’s second track, ″Yalla Yalla″, about the uprisings of the Arab Spring. "Yalla Yalla/Ool Inshallash/From Kuwait to Casablanca/All the young ones rising up yo/First in Tunis, then came Cairo", rings the chorus. However, it's not that simple and Nagi succinctly sums up for us how decades of oppressive one-man dictatorship in these countries created a tinderbox awaiting a single spark to set off the explosion. "Until one day from Tunis/A fruit man, was beaten along with his fruit stand/He didn't give a bribe/police revoked his permit/So he took his own body and he burned it/All of Tunis inhaled this smoke/and the plan became to revolt."

Nagi tackles the issue of the West stereotyping Arab culture in the sixth and seventh songs on the disc, "ReOrientalism" and "Oriental Magic Carpet". (Actually the topic comes up in quite a few songs, but these two attack the issue head on). 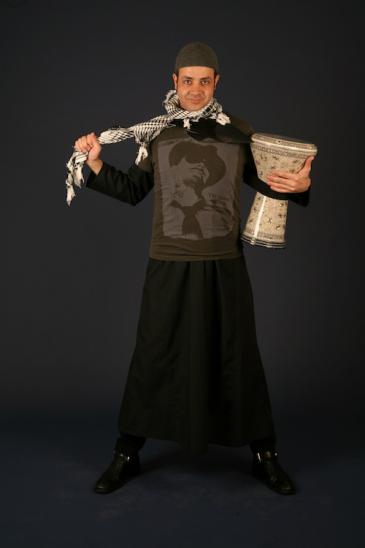 Cultural ambassador: Nagi "does everything from running educational programmes in schools to teaching Arabic dance and music in both traditional and modern settings. While his work is entertaining and fun, everything he does has the underlying goal of breaking the mould of the stereotypical view the West has of the Arab world", writes Marcus

After introducing us to the variety of ways Arabs have been depicted down through the years by Western popular culture, "ReOrientalism" concludes with: "Can you understand how fascination travels/from the love of caravan romance/To terror and profiling, all on the heals of a camel?/Fantasy is a type of Stereo (type)/Stereo, two speakers/One for either ear/Telling you to both desire AND fear."

What's wonderful about this disc is how Nagi prevents it from becoming a simple polemic with his wonderful sense of humour. Tracks like "What Arabs Do For Fun" ("We have fun by talking politics in a small room/yelling at someone who probably agrees with us...we enjoy crowding a hospital room full of everyone we know/around the bed of our sick loved-one.") and "Baladi Tuktuk" ("He was an immigrant to America/Serving canned Hummus/it's a joke joke/So he left Aladdins, Back to Cairo/Now he drives his own Tuktuk.") show us how in spite of cultural differences, we all celebrate the same things and face the same troubles.

Any child of immigrants will recognise their families in these songs and others on ″Detour Guide″. While it might specifically address issues facing Arabs and how they're represented in the world, anyone who has faced the same stigmas of stereotyping can easily identify with what Nagi is singing about.

Finally, this disc is about not being ashamed of who you are and where you come from. "If I Were Hummus" and "Heart Full of Cairo" are both testimonies to this type of pride addressed in different manners. In the former, Nagi ends the song with the lines "I am an Arab even when American/You can buy hummus at a market/But you can not pay me to forget". With the latter, he has set the lyrics and voice of Pleasant Gehman to a soundscape of street sounds from Cairo. It's a total immersion of the senses into the mind into the city, and if you listen closely you can hear the hopes and dreams of the people who live there.

″Detour Guide″ is an extraordinary CD from the mind and heart of an extremely gifted and talented artist. It introduces us to an Arab world we never see in the movies or television news. Nagi has created an affectionate portrait, warts and all, that everybody who cares about the world should listen to.

Turkish author and journalist Mustafa Akyol is one of the foremost pioneers of an Islam reconciled with modernity. Musa Bagrac spoke with Akyol for Qantara.de about his new book " ... END_OF_DOCUMENT_TOKEN_TO_BE_REPLACED

A bird's eye view of eight hundred years of history: Brian A. Catlos tells the story of Al-Andalus in the style of a streaming series and deconstructs the myths of the Reconquista ... END_OF_DOCUMENT_TOKEN_TO_BE_REPLACED

Known to Jews, Muslims, and Christians by three different names – Sefarad, al-Andalus, and Hispania, respectively – the Iberian Peninsula has been a centre of fertile intellectual ... END_OF_DOCUMENT_TOKEN_TO_BE_REPLACED

A heated debate is raging in the Islamic world about whether the religious and political spheres in Islam are one and the same. Before this matter can be settled, the terms " ... END_OF_DOCUMENT_TOKEN_TO_BE_REPLACED

On their fourth CD "Irade" (willpower), Masaa has left its piano sound behind, yet continues with its new guitarist to pursue a path that bridges jazz improvisation and Arabic ... END_OF_DOCUMENT_TOKEN_TO_BE_REPLACED

Muhyiddin Ibn Arabi (1165-1240) is one of the most influential Arab philosophers and mystics. James Morris, Professor of Islamic Theology at Boston College, explains why his ... END_OF_DOCUMENT_TOKEN_TO_BE_REPLACED
Author:
Richard Marcus
Date:
Mail:
Send via mail

END_OF_DOCUMENT_TOKEN_TO_BE_REPLACED
Social media
and networks
Subscribe to our
newsletter