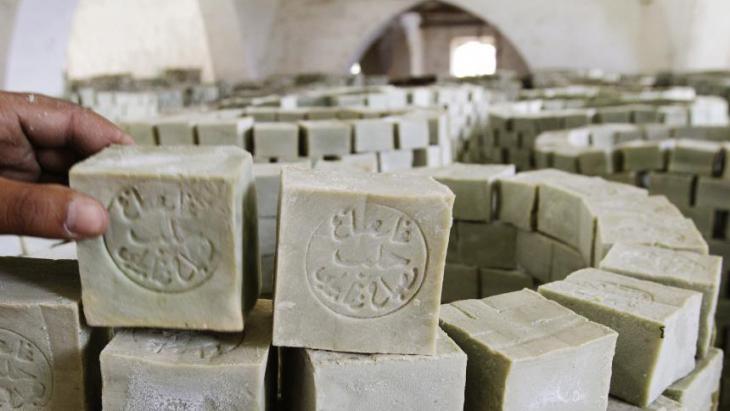 Although the mere mention of the city of Aleppo conjures up images of war and destruction, Aleppo soap is flying off the shelves in Germany's organic shops and supermarkets. But how does this popular product get from war-torn Syria to Germany? And is it really made in Aleppo? By Mey Dudin

A green and white box peeps out of the dust and rubble. On it, written in red, is an Arabic name: Hussein Zahra. This piece of cardboard is the only indication that this was once the site of a workshop, a soap factory. All that remains of what were once two-storey buildings is a concrete skeleton riddled with bullet holes.

Aleppo, once a thriving city in northern Syria, has been destroyed. First came the rebels, then the jihadists, then the Syrian bombers and most recently the Russian bombers. Yet despite this destruction, one of the region's most famous exports, Aleppo soap, still finds its way onto the shelves of health food shops, pharmacies, drug stores and organic shops and supermarkets in Germany. But where does the soap really come from?

Aleppo soap made in Turkey

Hussein Zahra began making handmade soap out of olive oil and laurel oil almost four decades ago. The family-run company was situated in Sheikh Saeed, a district in south-eastern Aleppo that has been at the centre of fierce fighting for a very long time. Three years ago, his son Mohammed, who now runs the company, fled the war. Today, Mohammed produces Aleppo soap in Mersin in Turkey, from where he ships it to Europe and Asia. He shuns the use of modern technology, choosing instead to produce soap the way Arab soap producers have done for hundreds of years. In these times of crisis, however, raw materials, transport and shipment are more expensive and more difficult. 'We hope we will be able to return to Aleppo soon,' says Mohammed. 'We are very tired.'

Most of his fellow soap-makers feel the same way. Where once over 200 soap factories of all sizes produced soap in and around Aleppo, almost all have either closed or are in exile. Because soap does not actually have to be produced in Aleppo to bear the city's name, most companies have shifted production to safer places abroad. One has set up shop in France; most have settled in Turkey. After all, the Turkish-Syrian border is only 60 km from Aleppo.

Talal Anis also moved production, first to Afrin in the Syrian Kurdish part of the country and then further – across the Turkish border – to Gaziantep. These moves cost him dearly; many items were stolen each time he moved.

In the line of fire

Before the conflict began in 2011, Talal and his partner were producing up to 800 t of Aleppo soap every year. Today, this figure has shrunk to a maximum 250 t. He saw no future for himself in Aleppo: ″Many soap factories were razed to the ground. They suddenly found themselves on the front line,″ he says. What's more, factory owners were kidnapped and held for ransom. Others were killed and some just disappeared off the face of the earth. Very few have stuck it out. One of the few to stay in the city is a friend of Talal, who is now producing soap at home. 'He now lives upstairs and manufactures soap on the ground floor.' With all the power cuts and water shortages in the city, people in Aleppo have to be creative: they work with generators and dig new wells.

When most people think of Aleppo, they think of barrel bombs, jihadists and mass exodus. Aleppo has become synonymous with a bloody war for which there is no solution. Six years ago, things were very different: Aleppo, situated at the heart of one of the most fertile regions in the Middle East, was known for its fascinating old quarter with its bazaars, caravanserais and ancient mosques.

Aleppo is one of the oldest, continuously inhabited cities in the world. Until the opening of the Suez Canal in the year 1869, it was situated on a number of important trade routes, including the Silk Road. Legend has it that Abraham, who is revered by Jews, Christians and Muslims alike, milked his cow on the hill where the citadel stands. Indeed, it is this legend that gave the city its Arabic name: Halab al-Shahba (which translates as 'he milked the grey cow').

In the seventh century, resourceful craftsmen in the region revolutionised the production of soap: they boiled olive oil and lye in large vats, adding laurel oil to the mixture. The first hard soaps were born. To this day, Aleppo soap is made according to this ancient recipe. 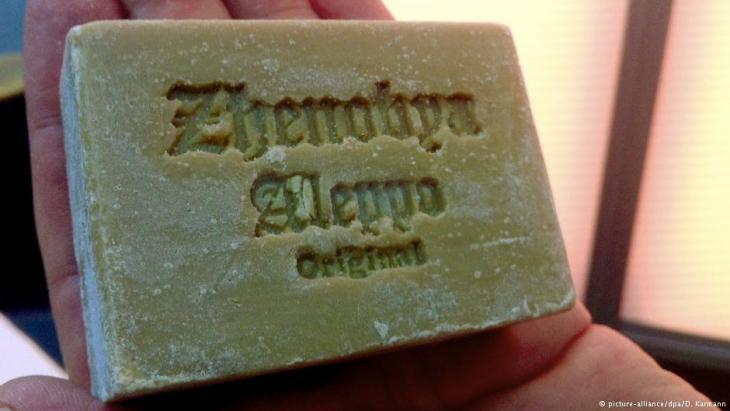 The first hard soap is born: in the seventh century, resourceful craftsmen in the region revolutionised the production of soap: they boiled olive oil and lye in large vats, adding laurel oil to the mixture. To this day, Aleppo soap is made according to this ancient recipe

After the mixture has boiled to a paste, it is poured into shallow basins and spread out. It is then allowed to cool and harden. The mixture is then cut by hand into blocks, the name of the manufacturer is stamped into the soap and the blocks are then stacked and left to dry for up to nine months. At this point, the surface of the soap is ochre in hue. Inside, however, the soap is still olive green. In theory, the soap can be stored in a dry place for decades without diminishing in quality.

″Soap was a huge export success story and the foundation on which many of the region's most affluent families built their wealth,″ says Christian Sassmannshausen of the Institute for Islamic Studies at the Freie Universitat Berlin, who has taken a closer look at soap production in the Middle East as part of his research work.

Soap-makers in the region that now comprises Syria, Lebanon, Israel, Palestine and Jordan had a major advantage over others in the business: their raw materials were all produced nearby. This was a boon at a time when the transportation of olive oil or laurel oil was very expensive. In the early twentieth century, however, the Arab market was flooded with mass-produced soap from Europe, causing a collapse in sales of the local product. It was only the organic trend and the growing popularity of natural cosmetics that brought Aleppo soap to the attention of the Europeans once again. It has one major advantage: it is produced without palm oil and without any artificial ingredients.

The war in Syria made Aleppo soap a product in exile. Nevertheless, most of the manufacturers are in no doubt: some day, when peace returns to Syria, they will return to Aleppo and rebuild their factories.

Home
Print
Newsletter
More on this topic
Reconstruction of Aleppo: ″Others destroy and we rebuild″Churches in Syria after the fall of East Aleppo: Time for a new beginningSyria's cultural heritage under threat: "Virtually nothing is left"
Related Topics
Economy, History of the Near and Middle East, Refugees, Syrian Civil War
All Topics

Recent efforts to rehabilitate Assad are setting a damaging precedent for accountability, just as the international community is expressing the need to hold Russia to account for ... END_OF_DOCUMENT_TOKEN_TO_BE_REPLACED

The Kurds are under attack from two sides: from Turkey, and from Iran. The situation in their territories in northern Iraq is becoming increasingly desperate. Birgit Svensson ... END_OF_DOCUMENT_TOKEN_TO_BE_REPLACED

More than 300 children in rebel-held northwest Syria kicked off their own football World Cup on Saturday, with organisers hoping to shine a light on communities battered by 11 ... END_OF_DOCUMENT_TOKEN_TO_BE_REPLACED

Lamya Kaddor, MP for Germany’s Green Party, visited Qatar with a group of parliamentarians. In interview with Claudia Mende, she advocates a differentiated picture and urges that ... END_OF_DOCUMENT_TOKEN_TO_BE_REPLACED

Arabs in the German capital? For many, this means criminal clans. Yet the city is home to a vibrant intellectual scene. Exiles from Syria, Palestine and Egypt are gathering to ... END_OF_DOCUMENT_TOKEN_TO_BE_REPLACED

After a two-year hiatus, the Arab League re-convened at the beginning of November in Algiers against a backdrop of uncertainty and discord. By Pierre Boussel END_OF_DOCUMENT_TOKEN_TO_BE_REPLACED
Author:
Mey Dudin
Date:
Mail:
Send via mail

END_OF_DOCUMENT_TOKEN_TO_BE_REPLACED
Social media
and networks
Subscribe to our
newsletter