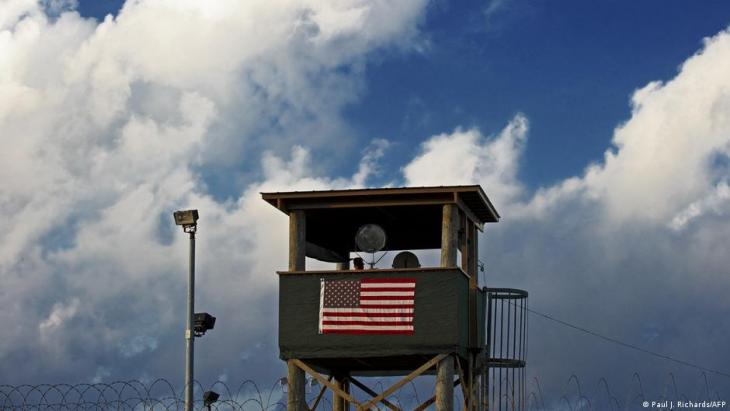 America and the War on Terror
Guantanamo's "forever prisoners"

The notorious U.S. prison camp is 20 years old. Over the years, several plans to close it have been rejected. For the detainees, little has changed in the last two decades. Oliver Sallet reports from Guantanamo Bay

Mohamedou Ould Slahi spent 14 years behind bars. He was tortured for 70 days and interrogated for 18 hours a day for three years. He lived in Germany prior to his arrest and was suspected of being a high-ranking al-Qaida operative involved in the September 11 attacks, although this was never proved. He was never charged or convicted during his 14 years in Guantanamo. The Mauritanian, who is now 50, was eventually released – but was never compensated for his stolen life.

Defence attorney Nancy Hollander's most high-profile case continues to haunt her to this day. Slahi's story recently made it to the big screen as a motion picture. His crime was taking part in a terrorist training camp in Afghanistan and answering a phone call on Osama bin Laden's satellite phone. This of course does not cast him in the best light, his lawyer recalls, but it also was not enough to indict him.

Hollander says that Guantanamo illustrates that the U.S. is a country that is "not one that respects the rule of law", labelling it a "disastrous situation".  This applies not only to the 13 detainees who are being held without charges and have been awaiting their release for years but also to alleged perpetrators of the September 11 attacks, the so-called "forever prisoners", who are also still awaiting trial  20 years after the attacks.

This lack of rule of law was no accident but rather a goal of the U.S. administration under President George W. Bush at the time, according to Amnesty International's Guantanamo expert Daphne Eviatar. "The Bush administration set up an offshore prison specifically to get around the rules of the United States legal system," says Eviatar. 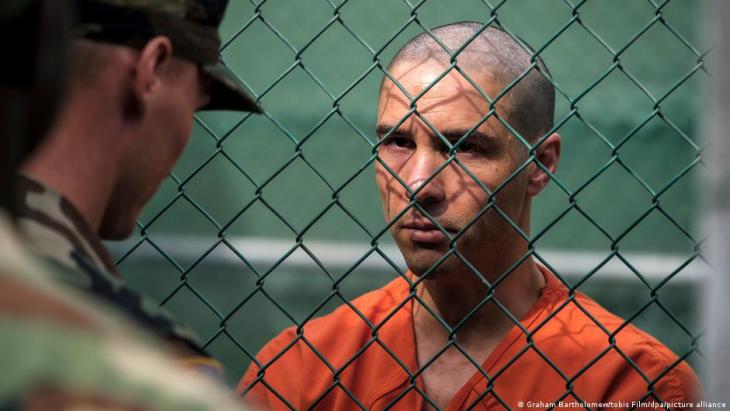 Mauritanian Mohamedou Ould Slahi, here portrayed by an actor in the recent feature film "The Mauritanian", spent more than fourteen years in Guantanamo. His "Guantanamo diary", which has been translated into numerous languages, won him global acclaim. After a protracted legal battle, Slahi was finally released in October 2016

She denounced extensive human rights abuses at Guantanamo in an Amnesty report that documents the indefinite detention of detainees without charge, as well as the torturing of inmates. While there is no publicly available proof to back this up, Eviatar did say that various investigations, including one by the U.S. Senate Intelligence Committee, have already documented the brutal torture of dozens of men at Guantanamo.

The U.S. Navy base at Guantanamo Bay, Cuba, has been in existence for more than 100 years. It was not until January 2002, a few months after the September 11 attacks, that it was expanded into a detention centre that has become notorious.

Anthony Natale, who is defending accused al-Qaida operative Abd al-Rahim al-Nashiri in court, speaks candidly about his disappointment with Guantanamo: "We're ashamed that everything that made this country one that we could say was a free country, that had equal justice for all, has abandoned all of that."

Anyone who wants to see Guantanamo first-hand has several obstacles to overcome. For a start, the weekly charter planes from Washington are not allowed to fly through Cuban airspace. Planes must first fly around Cuba to the east and are not allowed to set course for the military base until they are on final approach.

Permission to visit was granted on very short notice after weeks of security checks. Prior to departure, the "ground rules" had to be signed. These stipulate what journalists can expect in Guantanamo: no freedom of movement and, above all, no freedom of the press.

We were not even allowed to see the prison from the outside, and all information from inside is subject to the strictest secrecy, which is inevitably deeply frustrating for the lawyers of the detainees. Nancy Hollander successfully fought a seven-year legal battle for her client Mohamedou Ould Slahi to be allowed to publish his Guantanamo diary. 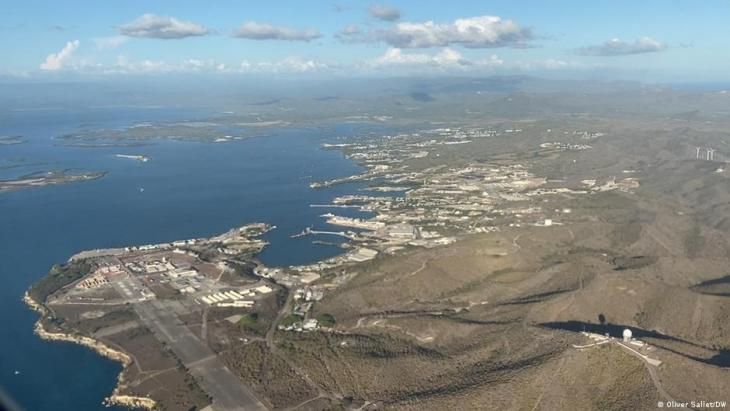 A legal black hole: according to Amnesty International's Guantanamo expert Daphne Eviatar, the Bush administration set up the offshore prison specifically to get around the rules of the United States legal system. Eviatar denounced extensive human rights abuses at Guantanamo in an Amnesty report that documents the indefinite detention of detainees without charge, as well as the torture of inmates. Eviatar confirmed that while there is no publicly available proof to back this up, various investigations, including one by the U.S. Senate Intelligence Committee, have documented the brutal torture of dozens of men at Guantanamo

Life in the shadow of the torture prison

Thinking of Guantánamo probably first and foremost conjures up images of torture and barbed wire. In fact, the detention centre and military tribunal are only a small part of the base. In large parts, the Navy base resembles a small U.S. town.

We are shown the new high school, which cost 65 million U.S. dollars and was only recently opened – equipped with the latest technology. 220 children of all ages are to experience as normal a childhood as possible here, even though the alleged mastermind of 9/11 is awaiting trial just five kilometres away as the crow flies. School director Emilio Garza explains that the prison camp is not on the curriculum here.

There is a supermarket, residential areas reminiscent of U.S. suburban idylls and the only McDonald's on Cuban soil. Radio GTMO plays Latin American pop music – GTMO, pronounced Gitmo, is the abbreviation for Guantanamo Bay Naval Base. In the souvenir store, visitors can buy T-shirts with the ironic imprint "Rockin' in Fidel's Backyard" – in Guantanamo, the "Maximo Lider" Fidel Castro still lives on.

Radio host Annaliss Candelaria, in camouflage uniform at the microphone, hosts the Morning Show at eight o' clock. Entertainment, music, and even serious topics such as suicide make it onto the programme. Above all, it's about "boosting morale among the troops," says Candelaria.

Radio GTMO does not report on the interrogations currently underway at the military court, nor does it report on the detention centre, which is simply not "part of the culture" of the naval base, Candelaria says. In fact, all of the court and prison facilities are inaccessible to most of the 6,000 people living at Guantanamo. "What we know about them is limited to what we read in the media," the presenter says. 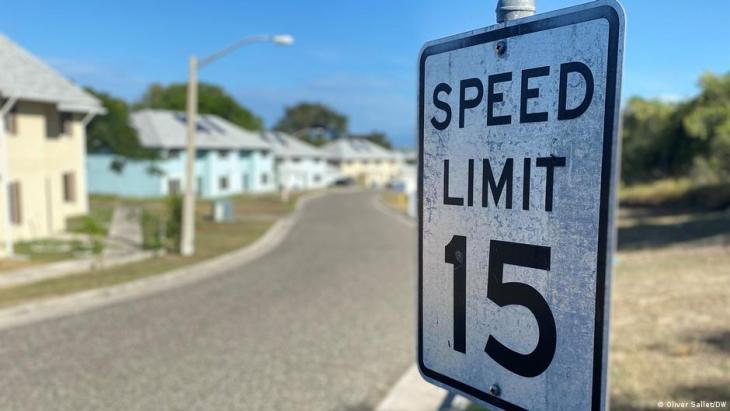 Blissful ignorance? Thanks to a new high school, which cost 65 million U.S. dollars, 220 forces children of all ages are to experience as normal a childhood as possible – even though the alleged mastermind of 9/11 is awaiting trial just five kilometres away as the crow flies. There is a supermarket, residential areas reminiscent of U.S. suburban idylls and the only McDonald's on Cuban soil. Radio GTMO plays Latin American pop music. It neither reports on the interrogations currently underway at the military court, nor on the detention centre, which is simply not "part of the culture" of the naval base. "What we know is limited to what we read in the media," admits radio presenter Annaliss Candelaria

11 January 2022 marked a grim anniversary for the Guantanamo detention centre and raised the question as to why the camp is still allowed to exist today, despite the obvious violations of human rights and the rule of law that occur here  – and above all, given that the U.S. war on terror in Afghanistan is over and its troops have withdrawn. This was the justification for the detention centre's existence in the first place.

The first plans to close down Guantanamo came at the end of George W. Bush's administration. Barack Obama promised to close it several times, but soon lost his majority in Congress to the Republicans, who in turn introduced a law that said "no one who has ever been in Guantanamo can come to the U.S. for any purpose, trial, medical et cetera," explains Nancy Hollander. This, she says, makes it legally impossible to move inmates to the United States.

Plenty of assurances – no action

President Donald Trump subsequently changed course and announced that Guantanamo would remain open. According to Republicans, Guantanamo continues to protect against terrorist attacks and that transferring inmates to the U.S. would be too dangerous. Guantanamo opponents however argue that the very existence of the camp radicalises young Muslims.

The next reversal on Guantanamo policy came under President Joe Biden, who announced through his spokeswoman after taking office that he planned to close the camp during his term in office. But when the U.S. Senate Intelligence Committee met recently to address the issue, not a single member of the Biden administration was on hand. This shows, above all, where the priorities of the government are, which so far is not following up its words with action, says Nancy Hollander. 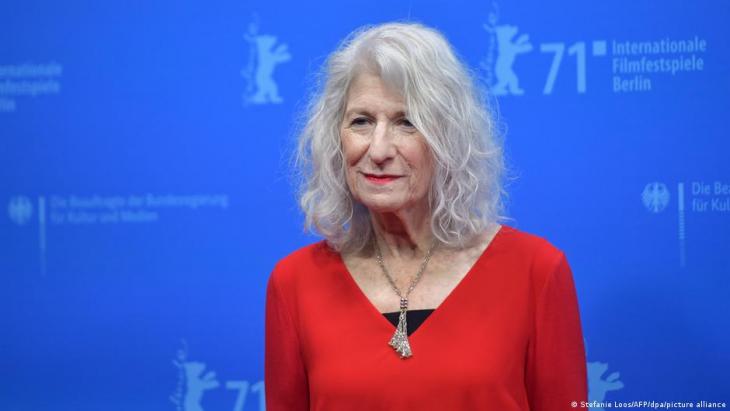 Not a country "that respects the rule of law": Mohamedou Ould Slahi's defence lawyer Nancy Hollander is scathing in her criticism of the United States, labelling Guantanamo a "disastrous situation". This applies not only to the 13 detainees who are being held without charges and have been awaiting their release for years, but also to alleged perpetrators of the September 11 attacks, the so-called "forever prisoners", who are still awaiting trial 20 years later

With its failed infrastructure programme and the approaching midterm elections amid low polling numbers, the Biden administration arguably has bigger problems to deal with than Guantanamo. What the future holds for "Gitmo" is completely open. Some of the prisoners could be released as planned. Others could be returned to their countries of origin.

Daphne Eviatar of Amnesty International says she is optimistic about the future. "But as that number gets smaller and smaller, it will become more and more clear and how irrational it is, how absurd it is," she adds. What is also clear is that apart from the well-known moral reasons, one prisoner at Guantanamo costs U.S. taxpayers $13 million a year.

It would be cheaper to have them imprisoned in the U.S., but that, again, aside from the legal hurdles, is not the answer either, says Nancy Hollander, who calls for the immediate release of all Guantanamo detainees. "We can't hold people for 20 years without any charge because, according to the U.S., there is not enough evidence to charge them, but we somehow know they're dangerous."

The question of Guantanamo's future can no longer be answered with rational arguments. Like so much in the U.S., it has become a political pawn in whose shadow the "forever prisoners" have been awaiting trial for 20 years.

Very different Western reactions to the suffering in Ukraine and the Arab world show that there is a profound rift among cultures. Essay by Michael Young END_OF_DOCUMENT_TOKEN_TO_BE_REPLACED

The documentary "Nadia" tells the incredible story of Nadia Nadim, who was forced to flee from the Taliban as a child and became a football star. By Annabelle Steffes-Halmer END_OF_DOCUMENT_TOKEN_TO_BE_REPLACED

Three award-winning female directors appeal to the international film industry to save Afghan cinema. Supporting women filmmakers is more important than ever. By Christine Lehnen END_OF_DOCUMENT_TOKEN_TO_BE_REPLACED

Russia's ranking on the World Press Freedom Index has fallen again over the Kremlin's wartime censorship of the Ukraine conflict. From Myanmar to Mexico, journalists continue to ... END_OF_DOCUMENT_TOKEN_TO_BE_REPLACED

Ideally, those Europeans currently welcoming Ukrainian refugees would show the same sympathy to Syrians, Afghans and others fleeing war beyond the continent. But, argues Ian ... END_OF_DOCUMENT_TOKEN_TO_BE_REPLACED

END_OF_DOCUMENT_TOKEN_TO_BE_REPLACED
Social media
and networks
Subscribe to our
newsletter