The failure of the United States's global policy since 9/11 can be measured in the chasm between the dreams of 2001 and the reality of 2007. Paul Rogers takes stock of six years of "war on terror"

At a loss with the war on terror: George Bush, commander-in-chief of the US armed forces

​​The world is in the seventh year of a war with no end in sight. A short six years ago, in late December 2001, it all looked very different. A United States-led campaign had terminated the Taliban regime in Afghanistan, and the talk in Washington was already about moving on to deal with Saddam Hussein's Iraq.

After the visceral shock of the 9/11 atrocities, the George W Bush administration was on a roll – indeed the sheer force of what was just beginning to be called the "war on terror" was already beginning to recapture the vision of a "new American century".

In January 2002, the president's state-of-the-union address celebrated victory in Afghanistan and extended the war against al-Qaida to an "axis of evil" of rogue states (Iraq, Iran, and North Korea). The message was toughened in his speech at a graduation ceremony at West Point in June 2002, when he reaffirmed America's right to pre-empt future threats.

It was becoming clear that the Taliban regime was just the first to be eliminated, and that Washington's ambitions extended to "regime change" in a number of countries. In its international relationships, moreover, the mantra became "you are with us or against us" – even more so as preparations to confront Iraq intensified in 2002-03.

The demolition of the Saddam Hussein regime in the war of March-April 2003 was acclaimed in a further grandstanding speech on the deck of the USS Abraham Lincoln in May, against the backdrop of a giant banner reading "mission accomplished". At that, perhaps the high point of American hubris – with Afghanistan and Iraq counted as successes, and before the insurgency in Iraq had reached a critical point – the way seemed clear for Washington's larger, audacious political and military project: the wholesale transformation of the middle east and its own peripheries.

Afghanistan itself was planned to evolve into a pro-American state with permanent military bases at Bagram and Kandahar; the country would also provide easy access for new oil pipelines to the Indian Ocean. In the neighbourhood, the bases established in Uzbekistan (and perhaps other central Asian states) would both ensure greatly increased US influence in the oil-rich regions around the Caspian basin and perform the critical geopolitical task of countering the influence of Russia and China.

This alone was an extraordinary vision, but Iraq would be an even greater prize. There, Saddam Hussein's dominion had now been replaced by the comprehensive control of the Coalition Provisional Authority (CPA) under its viceroy, Paul Bremer. The convenient rewriting of the CPA's history suggests that it represented and oversaw little more than unplanned chaos. This is incorrect: 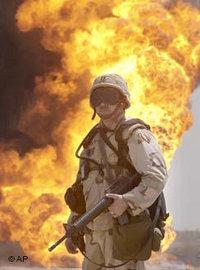 Iraq on fire: At the expense of the Iraqi people, US neo-conservatives had planned on building a "dream economy" in Iraq

​​The reality was of a precise neo-conservative plan to create a client regime based on an extraordinarily sweeping free-market economy. The intention was to undertake comprehensive privatisation of all state assets (in which foreign investors would included Israeli companies), heavy foreign involvement in the oil industry, a flat-rate tax system, all underpinned by a virtual absence of financial regulation.

The imagined result would be a sort of "dream economy", one impossible to create in the United States itself, given the annoying presence of trade unions, citizen movements, business regulations and other hindrances.

The United States would support this economic fantasy by entrenching in power a client Iraqi state, protecting (and overseeing) it via a network of major military bases across the country. The fact that a tenth of the world's oil reserves were under Iraqi soil and waters (four times that of the whole of the US, including Alaska) meant that a US-controlled Iraq would greatly improve oil security in the homeland.

Perhaps best of all, the success of this strategy would constrain the real enemy, Iran – to the extent that it might not even prove necessary to terminate the Tehran regime. After all, with two of Iran's neighbours (Afghanistan to the east and Iraq to the west) firmly in American hands, and with the US navy controlling the Persian Gulf and the Arabian Sea, the ruling elite in Tehran – whatever its political colour – would hesitate before risking its now vulnerable national security.

This, in May 2003, was the plan and the expectation. How do they look in the cold light of reality?

In Afghanistan, Taliban and other militias have made a remarkable comeback and are now tying down over 50,000 foreign troops. Across the border in western Pakistan, large areas are out of government control and available to al-Qaida, Taliban and their affiliates as safe territory from which to prepare, launch and recover from operations.

In Iraq, over 100,000 civilians have been killed directly by violence; as many as 4 million Iraqis have been displaced from their homes (nearly half of them forced to seek refuge in other countries). Tens of thousands of Iraqis have succumbed to disease and malnutrition, including diseases of poverty such as cholera. More than 100,000 Iraqis have been detained without trial. The human cost includes the death of 3,895 United States troops (as of 19 December 2007) and injuries to tens of thousands more.

In 2007, a determined surge in United States troop numbers has had some effect in curbing the violence in Iraq; though the strategy is unsustainable and has been pursued with short-term tactics that may have stored problems that will become apparent later. The rhetoric of the Bush administration about a "drawdown" in Iraq notwithstanding, the commitment to remain in Iraq is evident in the negotiation of long-term deals with the Nouri al-Maliki government and the construction of the world's largest embassy in Baghdad.

Meanwhile, the pressures on the US army in Afghanistan (as well as other Nato contingents) mean that there are calls to divert troops there. Most Nato states, however, are resolute in their determination not to commit themselves even further; it is now questionable whether the sizeable Dutch and Canadian forces will even be maintained at current levels.

Against this background, the al-Qaida movement continues to evolve. Its "brand" is capable of attracting recruits, maintaining networks, inserting itself into local conflicts, and (as in Algeria on 11 December 2007) mounting deadly operations. The use of "hard power" by the United States has proved a gift for its enemies.

This reality cast a sobering light on the decisions made and the thinking done in the immediate period after 11 September 2001.

From the start, the response to the atrocities in New York and Washington was wrong. The al-Qaida movement was seen as a near-satanic bunch of extremists bent solely on death and destruction instead of a complex transnational revolutionary movement centred on a perverse ideology with religious foundations. With such foundations, its leaders and ideologues did not, as those of most revolutionary movements did, expect success in their lifetimes.

Even such short-term aims as the eviction of "crusader" forces from Muslim lands and the destruction of the elite regimes of the "near enemy" in the middle east could take decades; while longer-term objectives such as the establishment of an Islamist caliphate might take a century.

For such an organisation, the response to its assaults by the George W Bush administration – one predicated almost entirely on the use of force – was exactly what it wanted. The successive campaigns in Afghanistan and Iraq could be skilfully presented (via a sophisticated propaganda machine using new technology and appealing to existing popular sentiments) as assaults by "crusader" (and "Zionist") forces against the heartland of the Islamic world (see "After Saddam, no respite", 19 December 2003).

In addition, there was the hugely valuable benefit for al-Qaida and its allies in both countries of providing combat-training zones for new generations of young paramilitaries.

A response to the 9/11 attacks based on reasoned understanding and foresight would have had a far greater chance of ensuring a just and humane global outcome. This would have treated the murderous incidents as horrendous examples of transnational criminality, and enabled the United States and many willing partners to build a formidable coalition across the world to bring the perpetrators to justice.

It might have taken years and proved to be a complex and difficult process, but the benefits are clear: undercutting the limited support for the al-Qaida movement that then existed in 2001, and avoiding the disasters of Afghanistan and Iraq with their huge human costs.

Instead, the Bush administration fell straight into a trap. Since then, tens of thousands of innocent people have been killed (in Afghanistan, Iraq, and in other theatres of the "war on terror"); even greater numbers have detained, and many of those tortured and abused. Washington's post-9/11 response has laid the ground for a decades-long conflict.

The deeply embedded nature of the "control paradigm" in United States military thinking means that a significant change of policy is hard to envisage and will be extremely difficult to undertake - even if the Democrats take the White House in November 2008. At some stage, though, reality must and will bite: the deeply counterproductive impact of the conduct of war on terror will come to be recognised and more sensible policies implemented.

Indeed, perhaps it is in the deeply counterproductive character of the policies of the last six years that there are some slight grounds of hope. The very failure of these policies offers space for a rethinking of western attitudes to security which could extend to much greater issues of global security.

The real drivers of conflict between 2008 and 2030 are likely to be issues of deep global inequality, economic desperation, people movement, and environmental limits – all reinforced by climate change. In such circumstances, it will be all too easy to see the key western security requirement as maintaining control in a fractured world. In the seventh year of a war with no end in sight, the failures of intelligence that marked its beginning may after all be the springboard for a new approach to human and planetary security in the decades to come.

Paul Rogers is professor of peace studies at Bradford University, northern England. He has been writing a weekly column on global security on openDemocracy since 26 September 2001.

This article was previously published by openDemocracy.net under a Creative Commons licence.

9/11 Anniversary
The Wrong Strategy against Terror
Four years after 9/11 and the declaration of the "War on Terror" militant Islamism is not on the retreat, and the US have since fulfilled the cliché of the merciless superpower, fuelling further anti-Western sentiment. Peter Philipp comments

RAND Corporation Study on the Islamic World
Study Calls for Rethink on the War on Terror
RAND recently published an analysis entitled "Building Moderate Muslim Networks", calling for networks of modern Muslims building on the experiences of the Cold War. Götz Nordbruch introduces the study

END_OF_DOCUMENT_TOKEN_TO_BE_REPLACED
Social media
and networks
Subscribe to our
newsletter