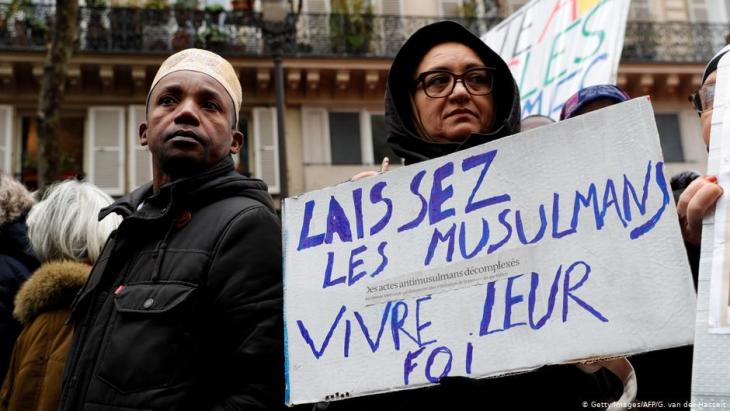 In his controversial book published in 2020, French author Pascal Bruckner describes anti-Muslim sentiment as a fiction, claiming that the term "Islamophobia" is being used to silence criticism of the religion. Alexandra Senfft responds by highlighting the contradictions in a popular view of Islam and Muslims that leaves little room for nuance

To teach his students freedom of expression, the French teacher Samuel Paty chose, of all things, the "Muhammad cartoons" that in 2015 led to the murder of twelve members of the editorial staff at the satirical magazine Charlie Hebdo in Paris. He evidently told his students that they should feel free to leave the room or look away if they found the cartoons offensive. After all, many Muslims regard the "sexualised malice" evoked by the cartoons (Charlotte Wiedemann in the taz) as an affront to their religious beliefs. Paty knew of these sensitivities, or he would not have given his students the choice of whether or not to examine the material. His decision to tackle the subject of the cartoons in class can be described as courageous, but in view of the circumstances also as risky or perhaps naive.

The trial of the Islamist assassins of the Charlie Hebdo editors had just begun and the satirical magazine had taken it as an opportunity to publish the cartoons once again. It was only to be expected that this would incite further tensions in a dispute that has been raging for years. Furthermore, despite the suppression of the terrorist militia Islamic State by an international alliance that included the French, Islamism had not simply vanished from the face of the earth.

On the contrary, narcissistic visions of a jihadist Islam, complete with fantasies of spectacular violence, continue to smoulder, especially among the young and impressionable. Paty was stabbed and beheaded near his home on 16 October 2020. The murder signified that warfare had broken out in a European capital, spreading terrorism and barbarism right in our midst.

All the while, Islamist attacks are constantly taking place all over the world, primarily with Muslim victims and without the general European public even being aware of what is going on. Not to mention the many anonymous civilians that have fallen victim to Western military interventions. "How much weight is accorded to a human life continues to be measured by colonial standards, meaning that non-European deaths count for less," says Charlotte Wiedemann.

Paty's Chechen killer was still just a teenager. He grew up in a kind of in-between world, detached from the native country of his immigrant parents and not yet anchored in his new homeland. How divorced from his own feelings must an 18 year-old be to be capable of assuming the role of judge and executioner and beheading a fellow human being? In the end, both the teacher and his executioner ended up dead. Murder is murder, and the French justice system takes care of dealing with the instigators and accomplices, guided and driven by the rule of law. 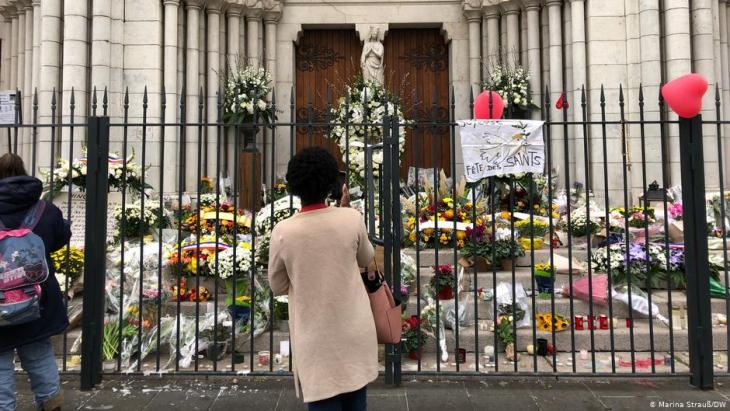 Terrorism in God's name: "In France, 250 people have died in recent years as a result of Islamist terrorism. There is no excuse, certainly no religious vindication, for such abhorrent acts. And yet, the depths of these transgressions still demand an attempt at explanations and a cool analysis of the context," writes Alexandra Senfft in her essay

Simple explanations for an archaic act of violence

In France, 250 people have died in recent years as a result of Islamist terrorism. There is no excuse, certainly no religious vindication, for such abhorrent acts. And yet, the depths of these transgressions still demand an attempt at explanations and a cool analysis of the context.

The interdisciplinary mix of politics, history, economics, religion, and social and individual psychology that is called upon in these cases does not always provide clear answers. The complexity of the various efforts at explanation is even harder to sustain in the face of such an archaic act of brutality, and the urge to resort to a logic of violence is strong. In Germany, too, opinion-makers were quick to speak of the missionary zeal, hunger for conquest and oppressive nature supposedly inherent to Islam, thus reducing the religion to veiling and terrorism. Such crude generalisations accord all Muslims a share of the responsibility. This attests not only to helplessness and fear, but often also to ignorance and casual racism, intentional or otherwise.

At the memorial service for Samuel Paty, Emmanuel Macron called the teacher "the face of the Republic" and stressed that France's freedom and secularism must be defended. Paty, he said, had been the victim of hatred – "a hatred of who we really are deep down". The president thus painted the picture of a divided society, of an "us" and a "them". This sounds eerily like the "clash of civilisations" predicted by the controversial American political scientist Samuel Huntington in 1996. The truth is, though, that the majority of French Muslims live neither isolated from society nor in opposition to it.

One year ago the Taliban returned to power, seizing Kabul; the U.S. and its allies made a panicked exit from the country. Of all the books written on the subject, four stand out ... END_OF_DOCUMENT_TOKEN_TO_BE_REPLACED

In "Iran. Die Freiheit ist weiblich", journalist Golineh Atai describes the dogged resistance of courageous Iranian women against the Islamic Republic and the mullahs who have ... END_OF_DOCUMENT_TOKEN_TO_BE_REPLACED

Unflattering terms were used at a German Football Association human rights congress aimed at "intensifying the discussion" ahead of the World Cup. One speaker in particular made ... END_OF_DOCUMENT_TOKEN_TO_BE_REPLACED

Egyptian authorities have Mada Masr in their sights once again after critical reporting. But the editor of the country's last independent news source is adamant they will continue ... END_OF_DOCUMENT_TOKEN_TO_BE_REPLACED

Like Christianity, Europe's history is one of migration. Both have strong roots in the Orient and in cultures thousands of years old. Cultural historian Bernhard Braun invites us ... END_OF_DOCUMENT_TOKEN_TO_BE_REPLACED
Author:
Alexandra Senfft
Date:
Mail:
Send via mail

END_OF_DOCUMENT_TOKEN_TO_BE_REPLACED
Social media
and networks
Subscribe to our
newsletter