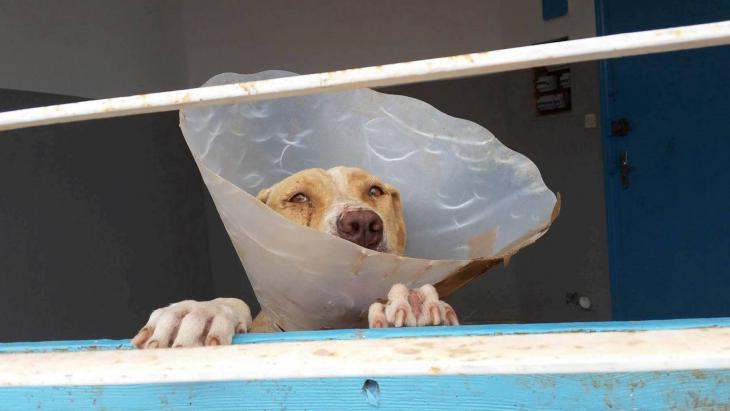 Stay of execution for strays

Late summer in Agadir. Hay bales are piled up along the roadside; lorries full of bleating sheep rattle past: Eid ul-Adha, the Islamic feast of sacrifice, casts a long shadow. But while butchers everywhere are sharpening their knives, in the no-man′s-land to the south-east of the city, the former rubbish processing plant near Tikiouine is home to an embryonic pilot project celebrating life: ″Dar Imouddar″ – The House of Animals. By Regina Keil-Sagawe

It finally happened on 15 August: a contract between the city of Agadir and the Association le Coeur sur la Patte came into force. An historic contract, putting an end to the slaughter of Moroccan street dogs, in Agadir at least. If everything goes to plan, that is.

The ″capture, neuter and release″ concept, recommended by the WHO and practised worldwide, will now also be implemented in Morocco. Then the dog-catchers will be re-educated. They have been hunting Morocco′s stray dogs for decades with shotguns and strychnine, but without success. The country is home to 2 million stray dogs, 200,000 of which are eliminated every year for fear of rabies.

They do it in spring, when the tourists arrive. Or when a particular event is coming up. Like the Marrakesh film festival. Or the COP22 World Climate Summit this coming November. Morocco′s animal rights campaigners started calling for a boycott of the summit back in March, following the grisly massacre of street dogs in Ksar el-Kebir in Easter week.

Despite a fervent appeal from Aziza Nait Sibaha – president of the animal welfare association Comme Chiens et Chats – and Nadia Daoudi-Amahzoun, president of the ASPHE Atlas, to Ksar el-Kebir′s city council and Morocco′s prime minister, the ″abattage administrative″ was carried out over five nights. There was a massive online outcry: videos of dying dogs with bullet wounds and photos of teenagers with rifles posing triumphantly in front of pick-up trucks piled high with corpses, were widely shared.

All this should soon become a thing of the past. At least in Agadir. Thanks to the city′s second mayoress, Dr Amal El Bakkali from the Islamic conservative party PJD. The PJD, of all parties? ″Yes, of course,″ explains the doctor of human medicine. ″Animals enjoy a high status in Islam. A woman who kept a cat locked up and let it starve to death was denied entry to paradise. But even so, everyone laughed when I said I was going to stand up for street dogs.″ 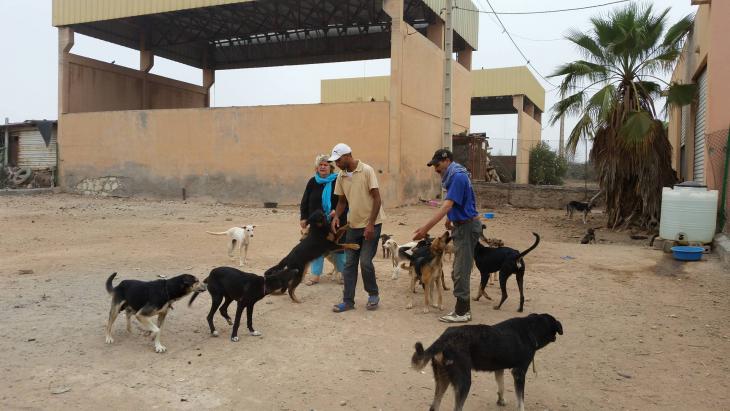 Old habits die hard: ″people have been killing the street dogs here for more than half a century – and there are more and more of them! A female puppy first comes into season at about six months old and then gives birth to ten or twelve pups. There′s only one way to change that, and banish rabies at the same time: immunise and sterilise, sterilise, sterilise,″ says animal rights campaigner Michele Augsburger

Still, the mayoress for the environment, whose area of responsibility also covers the management of stray dogs and cats, managed to convince the mayor of Agadir and the governor of the Agadir – Souss – Massa – Draa province. ″We′ve been poisoning these dogs with strychnine for forty years. Enough is enough.″

The driving force behind this move is Michele Augsburger. After a career in Zurich, she and her Swiss husband Jean-Pierre returned to Agadir in 2006, bringing two Moroccan street dogs – ″beldis″ – with them. These have now been joined by around 150 beldis and stray cats, dwarf hens and parakeets, to which they offer an idyllic home on their estate not far from the airport.

Michele herself is there only rarely. With her blonde lion′s mane and the temperament of her Italian mother, she is out and about from morning to evening setting pilot projects in motion, above all the animal rescue association Le Coeur sur la Patte, founded in 2013.

″When I was a child in Agadir, the authorities just used to gas them,″ Michele tells me as we travel up the coast road in her white Dacia-Duster, with two beldi puppies, number 2 and number 15, fidgeting excitedly on the back seat. They are the first dogs to be successfully immunised, neutered and taken back to the area they came from – the beach at Anza – under the contract with the city of Agadir.

″People have been killing the street dogs here for more than half a century – and there are more and more of them! A female puppy first comes into season at about six months old and then gives birth to ten or twelve pups. There′s only one way to change that, and banish rabies at the same time: immunise and sterilise, sterilise, sterilise.″

And that is exactly what Michele has been campaigning for, stubbornly, diplomatically, with passion and dedication. And with the help of numerous funders, above all the Swiss Stiftung Tierbotschafter, alongside the Fondation Brigitte Bardot and various one-off events, like the organisation of a charity marathon last April.

A change in attitude

The 200 or so "clean" dogs with the coloured and numbered plastic ear-tags and the 300 or so cats with clipped ears that started to appear in and around Agadir in 2011 are under official protection and may not be poisoned. Leaflets have been distributed to inform the inhabitants, who are in the habit of throwing stones and hitting the dogs with clubs.

In any case, young people in Morocco are starting to change their attitude. The tragic fate of Ray the street dog, who was found in Casablanca last year with his eyes put out and his lips sewn together, was a wake-up call for many people: the first animal welfare demonstration in the country′s history took place in Casablanca in June; there were reports in the media, and the animal welfare associations began to work more closely together. A rash of Facebook pages has since appeared, organising the transport of sick strays to the nearest vet, not to mention a new, extremely funny novel – "Nom d'un chien" (Rabat: Éditions Marsam 2016) – penned by the literary scholar Abdellah Baida, which traces the ambivalence of Moroccans towards dogs and is well on the way to becoming a bestseller.

In Taghazout, the surfer hotspot north of Agadir, where the first ″capture, neuter and release″ programme for dogs was carried out in 2014, film-makers and photographers from all over the world can now be found creating portraits of the affectionate strays with their melancholy eyes and aristocratic posture.

They include Elke Vogelsang, who has shot to prominence in international animal photography and the British video artist Russell Scott-Skinner. A team of international biologists from Vienna University headed by Martina Lazzaroni also moved in for six months, to research the communicative abilities of the beldi dogs and the way they move around.

A drop in the ocean

Meanwhile, the House of Animals – Dar Imouddar – on the southern edge of Agadir is still just getting off the ground. Around thirty beldis doze in newly fenced-off grounds, in the sparse shade of dusty bushes. A dog fresh from an operation and wearing a pet cone around its neck peeps out of a barred window. In the next room, two bitches in season are in isolation, and a third could be turned into an operating theatre. 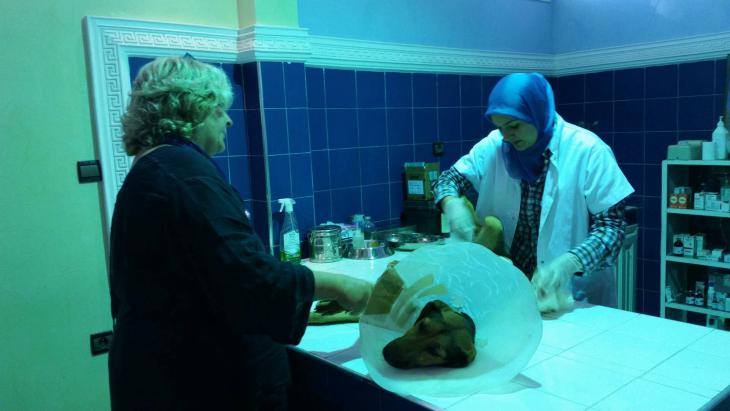 Capture, neuter and release: "an efficient large-scale sterilisation programme, as offered by the Worldwide Veterinary Service and advocated by Agadir′s mayoress for the environment and Le Coeur sur la Patte is the only humane solution. Neverless it is still currently opposed by Moroccan law, not to mention Morocco′s Veterinary Association, which has a monopoly on operations in the kingdom," writes Keil-Sagawe

This would be more cost-effective than carting the dogs to the vets and back in the dog catchers′ vans. Especially when only two of Agadir′s four vets are involved in the project – little more than a drop in the ocean.

The money pledged by the city of Agadir, 400,000 dirham (around 40,000 Euros), would easily be enough to immunise and sterilise 2000 animals in the space of two months, as they do in Mumbai or Thailand – but this can only be achieved if there are enough vets to permanently reduce the stray population through sterilisation.

The reality still looks different. Up to 300 stray dogs are poisoned each month in Agadir – to the horror of tourists venturing onto the beach early in the morning, before the corpses have been collected. Strychnine in chickens′ heads or feet, which tears the animals apart from the inside – the cheapest solution. And the cruellest.

The humane solution, however – an efficient sterilisation programme on a large scale, as offered by the Worldwide Veterinary Service and advocated by Agadir′s mayoress for the environment and the Association Le Coeur sur la Patte – is currently still opposed by Moroccan law. And the association of Moroccan vets, who have a monopoly on operations in the kingdom.

Only Morocco′s king, Mohammed VI, or the governor of the province has the power to change that.

EU parliamentarian Dietmar Koester criticises the Union's failure to speak up when faced with human rights abuses committed by its Middle Eastern allies, while pointing out that ... END_OF_DOCUMENT_TOKEN_TO_BE_REPLACED

Even though Meryem Alaoui's debut novel "Straight from the Horse's Mouth" centres on a female character working in a field – sex work – that is often, at least in Arabic ... END_OF_DOCUMENT_TOKEN_TO_BE_REPLACED

Morocco is aiming to enshrine Judaism as part of its national identity: the "House of Memory" in Essaouira is one step towards realising that goal. The nation’s Jewish legacy has ... END_OF_DOCUMENT_TOKEN_TO_BE_REPLACED

Mass protests began in Egypt on 25 January 2011. They triggered the overthrow of long-time ruler Mubarak. Ten years later, many human rights activists and journalists are in ... END_OF_DOCUMENT_TOKEN_TO_BE_REPLACED

Mass protests began in Egypt on 25 January 2011. They triggered the overthrow of long-time ruler Mubarak. Ten years later, many human rights activists and journalists are in ... END_OF_DOCUMENT_TOKEN_TO_BE_REPLACED

Ten years after the start of the Arabellion in North Africa and the Middle East, many view the movement as a failure. But rather than being over, it has now entered a more mature ... END_OF_DOCUMENT_TOKEN_TO_BE_REPLACED
Author:
Regina Keil-Sagawe
Date:
Mail:
Send via mail

END_OF_DOCUMENT_TOKEN_TO_BE_REPLACED
Social media
and networks
Subscribe to our
newsletter