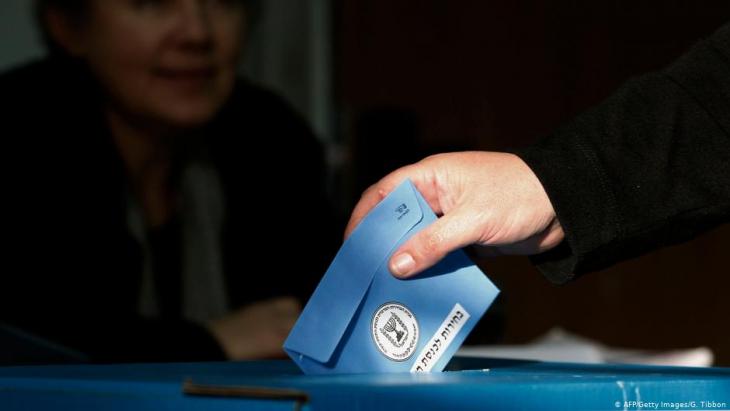 Another round of Knesset elections
Deciding Netanyahu's fate

In terms of policy, this election has little else to offer. Social issues, the economy and the conflict with the Palestinians are not dominant themes; it’s a question of power. By Inge Gunther

Israel’s prime minister Benjamin Netanyahu is fighting for his political survival. New elections to the Knesset are scheduled for 17 September – for the second time this year, after Netanyahu was unable to form a government at the first attempt in April. Only a clear election victory can save him from the threat of corruption charges and with it, a potential prison sentence.

And so Netanyahu is relying even more on attacks – especially against the Arab Israeli minority. "They are stealing the elections from us" is the most recent allegation that the prime minister has used to justify the attempt to rush through a law allowing video surveillance of polling stations.

A tame government committee gave the nod to the draft law, despite objections from legal experts and the central electoral committee, who rejected as baseless the accusation that Arabs tended towards electoral fraud. A Knesset panel then blocked the proposal to pass this highly problematic law through parliament so soon before the election date. If it had not, then the supreme court would very likely have overturned it for violating the secrecy of the ballot.

You may also like: Interview with Yehuda Shaul – "The treatment of the Palestinians is the biggest threat to Israel"

Netanyahu's fear of losing his immunity

Such considerations are admittedly not deterring the prime minister from continuing to stir up resentment with his camera campaign. Just as he did in 2015, when he mobilised his own right-wing voters with the rallying cry: "The Arabs are going to the polls in droves". Opposition politicians expressed another suspicion, namely that Netanyahu was laying the groundwork so that if he was defeated, he could claim that the election result had been manipulated. 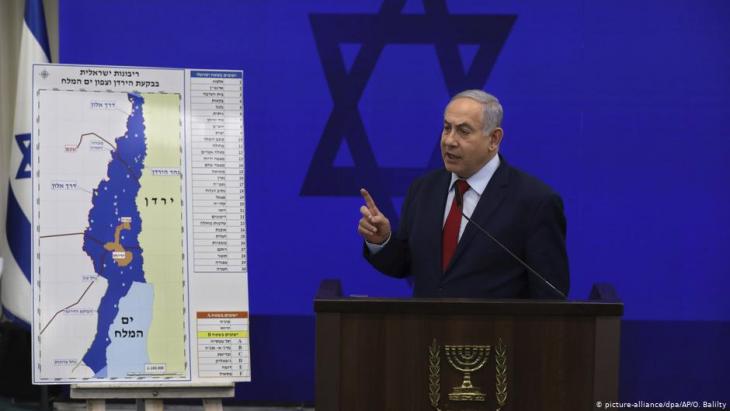 Catastrophic political signal: One week before the early parliamentary elections in Israel Prime Minister Benjamin Netanyahu has announced his intention to annex the Jordan Valley in the occupied West Bank should he be re-elected. Netanyahu declared that after an election victory he would "immediately" extend Israel's sovereignty to the area on the border with Jordan. Jordan and the Palestinians warned of the dire consequences of such a move

"There’s no doubt that Netanyahu is frightened of losing his majority and thereby, his immunity," says Achmed Tibi, probably the best-known Arab member of the Knesset. "Change is in the air." Tibi’s optimism comes from the fact that the Arab parties have once again managed to agree a united list. Last time, they ran separately, unable to agree on a joint list of candidates.

In displeasure at the quarrels between their political representatives, many Arab voters stayed at home. The result: Balad, which is left-wing nationalist and the smallest of the Arab parties, had a hard struggle to make it over the 3.25% hurdle into the Knesset. A strong turnout from the Arab minority, who represent 20% of the Israeli population, could shift the balance of power towards the opposition this time around.

Who has the most support in parliament?

Israel electoral arithmetic is already complicated by the number and variety of parties represented. Nine, if not ten of them, will probably make it into the Knesset. The deciding factor here is not so much whether Netanyahu’s right-wing conservative Likud or the moderate coalition Kahol-Lavan (Blue and White) led by ex-chief of general staff Benny Gantz do better. In the end, what counts is who has the most support in parliament, and will therefore be tasked by the president with forming a government.

After the April elections, this task fell to Netanyahu, although his Likud and the Blue and White alliance were neck-and-neck with 35 seats each. But then Avigdor Lieberman of all people, a secular right-wing populist who likes to pick fights with the ultra-orthodox Jews, obstructed the coalition negotiations. Now Lieberman could find himself in the role of king-maker. Without him, both the camp of right-wing and religious parties led by Netanyahu and the centre-left opposition, including the Arab united list, will struggle to gain the majority of 61 seats they need in the 120-seat Knesset.

Just a few months ago, Lieberman’s party Israel Beitenu (Our Home Israel) was known as a minority party for Russian-speaking immigrants. But it is now luring voters from other camps and according to polling is set to easily double its five seats. Lieberman’s election promise to axe the privileges of the Haredim, as the orthodox Jews are called, is popular.

Many Israelis are fed up of Yeshiva students being educated at taxpayers’ expense, but also being exempt from military service. Or that no public buses are permitted to run on Shabbat, because the religious Jews deem it a breach of the sacred day of rest. Netanyahu has given in to their demands again and again, in order to keep his pious Shas and Torah party coalition partners happy. 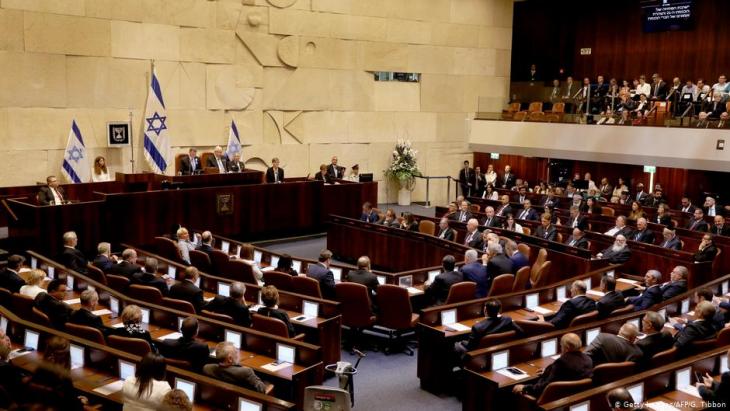 Netanyahu's fate hangs in the balance: Israel is to elect a new parliament on 17 September. A close race between Netanyahu's right-wing conservative Likud and the opposition alliance of the centre, Blue-White by former military chief Benny Gantz, is looming. Only a clear election victory by Netanyahu can save him from the threat of corruption charges and a potential prison sentence, writes Gunther

Lieberman wants an end to that. "He’s got my vote" is something you hear even from members of the Labour Party. Since they can forget any kind of peace process at the moment anyway, they at least want to take the opportunity to call a halt to the religious influence on politics. The fact that Lieberman lives in a West Bank settlement, has come out as anti-Arab in the past and supported the religious candidate in last year’s mayoral election in Jerusalem clearly doesn’t carry any weight with them.

In terms of policy, this election has little else to offer. Social issues, the economy and the conflict with the Palestinians are not dominant themes; it’s a question of power. Can the right-wing nationalists and the settler lobby that Netanyahu has gathered around him – not least using their support to gain immunity from the corruption charges that are hanging over him – continue to steer the country’s course? Or are the opposing forces, this entirely disunited collection of Blue and White generals and dwindling left-wing liberal parties strong enough to swing the rudder in their direction? The colours they have nailed to their mast are the defence of democracy and the institutions of the rule of law. But they don’t regard the Arab united list parties (with the exception of Meretz) as potential partners; at best they are merely the people who will help them to a majority.

You may also like: Arabs and Jews in Israel – You can't tear us apart

"Netanyahu doesn’t want Arabs in the Knesset, and Gantz doesn’t want Arabs in the coalition," says Ayman Odeh succinctly. He is a civil rights lawyer and the top candidate on the united list. Though when Odeh recently stuck his neck out and said that he could definitely imagine entering a centre-left government under certain circumstances, he was also met by protests from the Arab community. The sense of merely being second-class citizens is too deeply rooted there.

The Nation State law passed under Netanyahu, which emphasises the Jewish character of the state, has intensified this feeling. Odeh had no choice but to withdraw his suggestion. It seems that the Arab MPs are at most prepared to support the Gantz camp from opposition. And in this way, Netanyahu might just end up getting away with it after all.

In Nathan Englander's novel "kaddish.com", a Jewish man is plagued by feelings of guilt and regret for disregarding the rules of the Kaddish (prayer for the dead) for his deceased ... END_OF_DOCUMENT_TOKEN_TO_BE_REPLACED

Russia is leaving no stone unturned in its attempts to make the Islamic Republic an ally in the war against Ukraine. Fortunately for Vladimir Putin, the mullahs in Tehran are ... END_OF_DOCUMENT_TOKEN_TO_BE_REPLACED

It is possible to write about the Holocaust and the crimes of colonial powers without downplaying anything. In her latest book, Charlotte Wiedemann focuses on the numerous blind ... END_OF_DOCUMENT_TOKEN_TO_BE_REPLACED

The Palestinian militant organisation Hamas, with Hezbollah's help, is building up a military presence in Lebanon, the ultimate consequences of which could be devastating, writes ... END_OF_DOCUMENT_TOKEN_TO_BE_REPLACED

With his fist bump greeting for a man he previously called a pariah, US President Biden has paved the way for Saudi Crown Prince Mohammed bin Salman's return to the international ... END_OF_DOCUMENT_TOKEN_TO_BE_REPLACED

Asked about the Shoah, Palestinians often bring up the Nakba, the displacement of Palestinians associated with the founding of the state of Israel. An Israeli Holocaust researcher ... END_OF_DOCUMENT_TOKEN_TO_BE_REPLACED
Author:
Inge Günther
Date:
Mail:
Send via mail

END_OF_DOCUMENT_TOKEN_TO_BE_REPLACED
Social media
and networks
Subscribe to our
newsletter