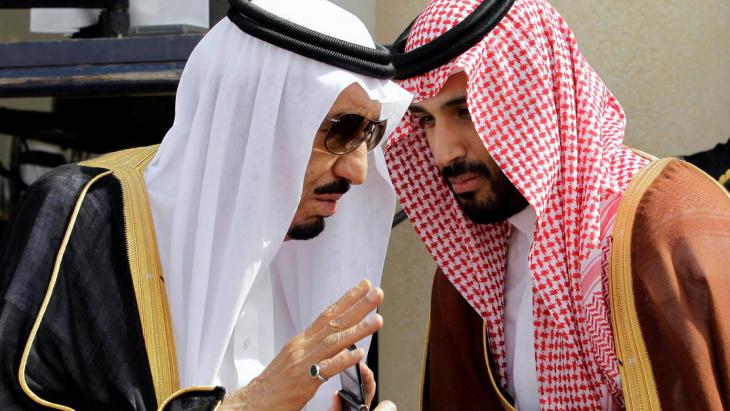 The harder they fall?

The most recent wave of arrests in Saudi Arabia would seem to have been motivated by a desire to tackle corruption. Look more closely, however, and it is clear that this move was planned for a long time and is just one of many steps Crown Prince Mohammad bin Salman is taking to edge closer to the throne. Tobias Zumbragel analyses recent developments

The incarceration of investors and several members of the Saudi royal family on charges of corruption on 4 November 2017 are evidence of the fact that Saudi Arabia's domestic orientation is being shaped by the strategic agenda of the Salman clan, to which the present regent, King Salman, and Crown Prince Mohammad bin Salman – also known as MbS – belong. This is about the consolidation and centralisation of MbS's power in a bid to prepare him to take over from his father and to catapult him into the generation of Al Saud grandchildren who hold the reins of power in the kingdom.

Although the arrests were entirely legal and even had the benevolent support of the clergy, it seems increasingly plain that there was method in the selective actions of the recently established anti-corruption authority.

In a kingdom where the rulers and the extended royal family view the country as their own personal property, the boundaries between public funds and private ownership are fluid. And so, it is possible to identify four different power-related objectives in the recent wave of arrests: (1) to disempower the Abdullah branch of the ruling House of Saud, (2) to consolidate the course of economic reform (cf. Saudi Vision 2030), (3) to get a firmer grip on the media landscape and the public sphere, and (4) to distract from a recent increase in repressive measures.

First off, the dismissal of Prince Miteb as the Minister of the Saudi National Guard (SANG) and the arrest of his brother Prince Turki bin Abdullah, who held the influential position of governor of the capital Riyadh until 2015, is evidence of a considerable increase in the power of the Salman branch of the royal family over what used to be the powerful Abdullah clan within the House of Al Saud.

On the one hand, as an independent military institution, the SANG is already a pillar of power, which above all served the former King Abdullah and his son Prince Miteb as a personal power base. On the other, Miteb – who was himself once the designated crown prince – was also seen as MbS's biggest rival, a man with the potential to rock the boat in the event of a changeover of power.

Secondly, the arrest of the most affluent men in Saudi Arabia hints at an economic motivation: the total value of the money allegedly embezzled by the people facing charges is estimated at about U.S.$ 100 billion. The Saudi regime, which has seen its income plummet as a result of the fall in oil prices, badly needs this kind of money to finance ambitious economic projects to diversify the Saudi economy and to continue to ensure it meets the performance targets that legitimise its existence, targets that in a rentier state such as Saudi Arabia rely heavily on income from rent. 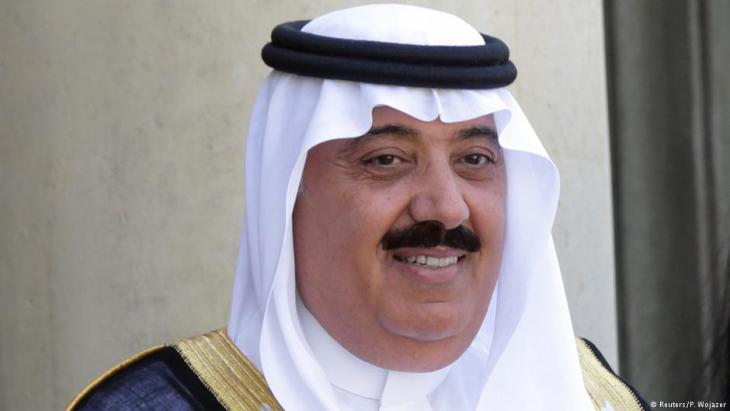 Politically sidelined and forced to pay up: Saudi Prince Miteb bin Abdullah apparently paid more than a billion dollars for his release. His detention is thought to have been linked to the Saudi royal family′s anti-corruption drive. Having consolidated his power base, Crown Prince Mohammed had dozens of members of the royal family, ministers of state and civil servants arrested on corruption charges. He had previously been appointed head of the newly-created anti-corruption authority by King Salman, thereby cementing his grip on the country′s security structures

It remains unclear the extent to this money can be returned. According to very recent reports, Prince Miteb could "buy his way out" of his current predicament by paying a fine of U.S.$ 1 billion. In addition to this, there is another, more international aspect to the media-friendly message that says this is all about ridding Saudi society of corruption. The aim is to market the crackdown on corruption as the crown prince's attempt to clean up the country in order to make the Saudi market more attractive for foreign investors. Nevertheless, it remains unclear whether this robust and arbitrary approach will not scare off rather than attract potential investors in the short term.

Another striking aspect of this wave of arrests is that three of the major political and economic figures arrested own the most important relatively independent media channels in the Arab world.

This implies a third power-related objective behind this wave of arrests: by gaining control of these media channels, MbS gets his hands on another significant instrument of power that will allow him to shape public opinion and burnish his own image.

Fourthly, the anti-corruption campaign can also be interpreted as an exercise in distraction. The recent flurry of activity means that the passing of a new anti-terrorism law went virtually unnoticed. The new law allows for drastic sentences (including the death sentence) to be handed down to anyone convicted of any form of support for or involvement in terrorist activities.

One paragraph, however, which is not directly linked to the fight against terrorism, is of much greater interest. This paragraph allows for prison sentences of between five and ten years to be handed down to anyone convicted of publicly insulting the king and crown prince. This means that it could in future become much easier to legally nip the opposition in the bud.

The consequences of this wave of arrests remain to be seen. Nevertheless, they underpin a phase of intensified consolidation of the Salman clan's grip on power that began long before 4 November. 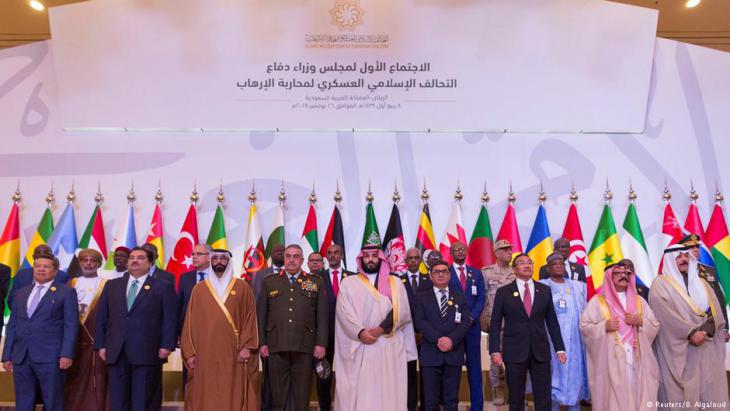 Saudi Arabia′s new strongman at home and abroad: just recently Crown Prince Mohammed bin Salman gave the green light for a new Islamic anti-terrorism coalition. In future all members of the alliance will ″pool their military, financial and political efforts″, not to mention their secret service activities, in a bid to combat terrorism more effectively, declared Salman. The formation of the coalition was something he had already announced two years ago. Former Pakistan general Raheel Sharif was appointed its commander-in-chief

A complete unknown on the Saudi political landscape at the time, Mohammad was appointed the country's youngest defence minister by his father, King Salman, in January 2015, shortly after the latter ascended to the throne following the death of King Abdullah.

In April 2015, King Salman named a new crown prince and made his favourite son deputy crown prince, a new position created by King Abdullah with the intention of securing the line of succession. At the same time, MbS was also given control of the state-owned travel company Saudi Aramco and made chairman of a newly established economic council.

In this latter post, he announced the introduction of the country's first ever set of comprehensive cost-cutting measures, only to revoke them a short time later, stating that economic stability had been achieved. Although macroeconomic data does not confirm this upswing, the move bolstered MbS's huge popularity in Saudi Arabia.

During this time, MbS also gained a reputation at international level as a liberal, open-minded leader who was pushing through (and continues to push through) a programme of radical reform and modernisation in a kingdom that had become stuck in the past.

This led to Muhammad bin Nayef, who had until that point been Washington's primary contact, being pushed ever more onto the sidelines and launched what has thus far been the final stage of the campaign to seize power: in July 2017, MbS replaced bin Nayef as crown prince, leapfrogging the entire generation of grandchildren between the ages of 50 and 60 who could potentially succeed to the Saudi throne.

There is much to suggest that this change did not go as smoothly or as voluntarily as the Saudi media suggests.

A stroke of genius on MbS's part?

The stability of the House of Al Saud rests on three pillars of legitimacy: firstly, on protection from an external patron (a role filled by the USA since 1945), secondly, on the acceptance of the Saudi population, and thirdly, on the support of the royal family or the Saudi core elite, which is dominated by members of the house of Al Saud (to the detriment, for example, of the clergy).

MbS has succeeded in cleverly reinforcing the first two of these three pillars in recent years. Evidence that he has the support of the U.S., the first pillar, comes in the form of a number of tweets from President Trump both in the run-up to the events of 4 November and on the night itself, stating that the crown prince could rely on American support and has good connections to the Trump family.

The young crown prince has also reinforced the second pillar: he is held in high regard, especially by the younger generation under 30, which makes up the majority of the population. They support him because they believe he is rapidly reforming the country after decades of political standstill.

It now seems that MbS has moved to secure the third pillar by making it clear that it is possible to take steps against anyone who is not on his side. Now he just has to bide his time. One possible indication of when this time might come is provided by speculation about the deteriorating health of his father, King Salman, which would result in a swift resolution of the succession.

It is impossible to say whether the ousted core elite will retaliate in any way during this fragile period of transformation. Similarly unclear is the question as to how MbS's impulsive nature will influence his success both at home and abroad. It is a risky game that father and son are playing in Saudi Arabia. And no one knows how it will end.

The Saudi national team is set to play the German Olympic squad at the Olympics in Tokyo later this month – a chance for the outsiders to make their mark. At the same time, and ... END_OF_DOCUMENT_TOKEN_TO_BE_REPLACED

The Middle East is plagued by electronic armies working at the behest of one regime or another. Long used by those in power as a weapon in the fight against activists and ... END_OF_DOCUMENT_TOKEN_TO_BE_REPLACED

The change in U.S. president is also having an impact on the conflict between Turkey and Greece. Since the USA has started to play the Greek card, the strategic situation in the ... END_OF_DOCUMENT_TOKEN_TO_BE_REPLACED

Turkey's parliamentary and presidential elections are scheduled for June 2023. But they are already casting a shadow. While the opposition is calling for early elections, ... END_OF_DOCUMENT_TOKEN_TO_BE_REPLACED

In his book "Ground Zero: 9/11 und die Geburt der Gegenwart" (Ground Zero: 9/11 and the Birth of the Present) Islamic scholar Stefan Weidner analyses the consequences of the ... END_OF_DOCUMENT_TOKEN_TO_BE_REPLACED

The rollout of coronavirus vaccines in the Middle East and North Africa is already taking place on a massive scale, with the United Arab Emirates leading the way. Nevertheless, ... END_OF_DOCUMENT_TOKEN_TO_BE_REPLACED
Author:
Tobias Zumbrägel
Date:
Mail:
Send via mail

END_OF_DOCUMENT_TOKEN_TO_BE_REPLACED
Social media
and networks
Subscribe to our
newsletter