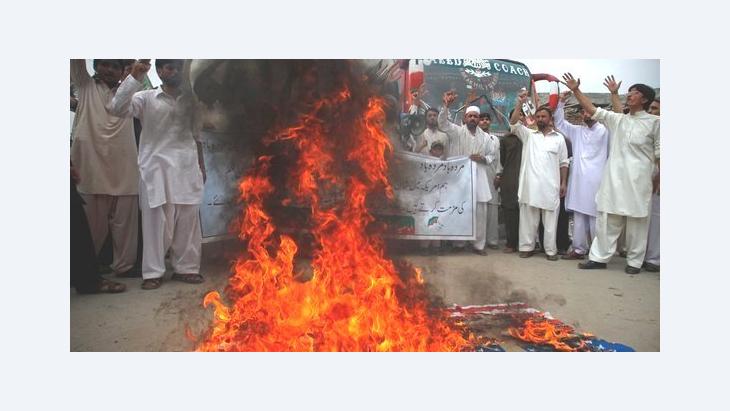 Responses to the inflammatory anti-Islamic film currently seen in Arab and Muslim nations are much worse than the film itself. These expressions of extremism are destroying all decency and civilised behaviour. A commentary by Khaled Hroub

﻿What has happened to a faith community in which the Koran says: "No one is to blame for the actions of others?" Where does this abandonment to instinct come from, this extremism and demagoguery currently in evidence in reactions to a dumb film bearing the title "The Innocence of Muslims"? Such reactions defend nothing, and only inflict damage. They destroy our societies and cast them back to a primitive, underdeveloped state.

Why does this film drive people to smash up Kentucky Fried Chicken or McDonalds restaurants in Tripoli? What part in all of this was played by Columbian peacekeeping troops, attacked by locals at their base in the Sinai desert? And what makes the embassies of Germany and Italy in Khartoum a target for "angry masses" reacting to this film?

What blame is carried by car owners whose vehicles are trashed because they have parked them on the road leading to the US embassy in Tunis? And who bears the responsibility for those who were killed or injured in the attacks on embassies and everything western? Finally, what of the blame assigned to the US ambassador and his staff murdered in Benghazi – people who had not even heard of the video? They represented a country that supported the Libyans in their rebellion against a tyrannical leader who subjugated their country for four decades. 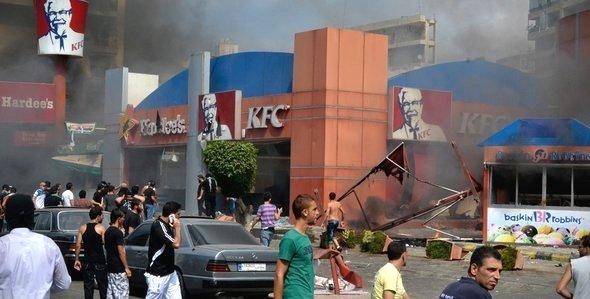 "If millions of people lose control simply because of a dumb insult, then it only goes to prove that they cannot even confidently represent the values they pretend to defend." Pictured: anti-western riots in Tripoli, Lebanon

​​The worst thing that we are currently experiencing is not this stupid film and its insulting content. As far as we can tell from the excerpts posted on the Internet, this is a lousy effort that is so pathetic, from the point of view of both content and aesthetics, that the only US cinema showing the film this summer shelved it after a couple of screenings. This is not a complex piece of work that presents intelligently packaged blasphemy, or that stimulates reflection. The insults are so down-at-heel that the only proper response should be to confidently ignore them.

A culture of religious fanaticism

Much worse and much more horrifying than the film itself are the reactions to it that we are currently seeing in Arab and Muslim nations, and how this extremism is destroying all decency and civilised behaviour. We are experiencing a culture of religious fanaticism that has contaminated the minds of the people for more than half a century. The lack of all sense, thought and self-assurance is striking - instead, instincts are being allowed to run riot.

At one point the Koran states: "Most people are not believers, as much as you would wish it to be so." And most people in this world are not Muslims, and consequently they do not regard religions and prophets as sacred, and we cannot force this respect upon them.

Dialogue and debate remain the only effective methods, but these only function if parties can demonstrate a measure of self-assurance. If, on the other hand, millions of people lose control simply because of a dumb insult, then it only goes to prove that they cannot even confidently represent the values they pretend to defend. They suggest that the very essence of these values is threatened by flippant insults and the slightest criticism.

One may interject that the West is hypocritical because it allows this debasement of Muslims but will not tolerate any insults directed at Jews and Israel. This might well be the case, but this is not my concern here. I am not defending the policies of the West, but rather I am talking about us and the catastrophes that are occurring in our societies.

We have lost all sense of measure. How else can it be that the malicious director of a bad film draws tens of thousands of demonstrators onto the streets, whereas in Syria, much fewer people are protesting at the daily killing of hundreds of their kinsmen? Even fewer are demonstrating for Jerusalem, or for Gaza. Mass instinct and a herd mentality deactivate rational thinking. 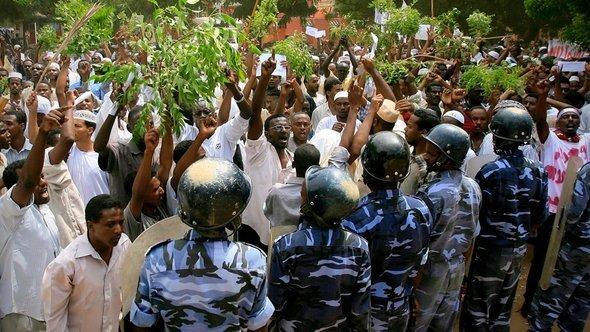 ​​It is quite possible that no one would have discovered the existence of the said film, and it would have sunk into oblivion if no one had paid any heed to it, which would have defeated its very purpose: to inflict the greatest possible damage on Islam and the Muslims. The opposite has happened. The film has secured its place in posterity; millions of people are now trying to at least view part of it online.

The fanning of base instincts

The problem is that such scenarios are repeated every year, and no one learns anything from it. The fanning of base instincts began with the fatwa against Salman Rushdie's "Satanic Verses" in the 1980s. Khomeini tried to be imam for all the faithful, casting himself as a defender of Islam – thereby shooting an average writer to fame and ensuring his book became a global bestseller.

We experienced the "world war of instincts" yet again with the Danish cartoon row several years ago. By drawing a few racist caricatures, a single illustrator drove millions of Muslims onto the streets, resulting in death and destruction in many cities across the Muslim world. Again, an unknown illustrator became a world-famous hero, and his cartoons were disseminated across the world.

The list of examples goes on and on. They are all sad and repellent. The most worrying and dangerous thing about them though is how the advancing radicalisation is threatening our own societies. Election results since the beginning of the Arab Spring appear to be accelerating this tendency, and it is incumbent upon the more intelligent opinion formers of these nations to regard religious extremism as an enemy much more dangerous than all foreign enemies.

The mob currently rampaging through the streets is ready to destroy anything in its path, and possibly ready to kill. The thought structure of these masses rests on the exclusion of others, on the non-recognition of others and the desire to be rid of these others – and this in nations that are themselves multi-religious and multi-ethnic.

But extremism and mass instinct can only serve to undermine the very group that exhibits these traits, even if this group thinks it is countering an opponent. By shooting themselves in the foot, the extremists are ensuring that opponent will win.

The journalist and media specialist Khaled Hroub is Director of the "Cambridge Arab Media Project" at the University of Cambridge. His book "Hamas – A Beginner's Guide" has been published into various languages.

Home
Print
Newsletter
More on this topic
Protests against Mohammed film in the Arab World: Adding Grist to the Salafists' MillProtests across the Muslim World: ''Deep mistrust towards the West''Escalating Conflict about Prophet Caricatures: Bomb in Turban
Related Topics
Al-Qaida, Arab Spring, Arabellion, Islam and the West, Islam and democracy, Salafis | Salafism, Sharia, Wahhabism
All Topics

Recent efforts to rehabilitate Assad are setting a damaging precedent for accountability, just as the international community is expressing the need to hold Russia to account for ... END_OF_DOCUMENT_TOKEN_TO_BE_REPLACED

Education for girls and women is still possible in Afghanistan, says Reinhard Eroes of the Kinderhilfe Afghanistan initiative. In interview with Elisa Rheinheimer, he talks about ... END_OF_DOCUMENT_TOKEN_TO_BE_REPLACED

Locals in the Middle East have said European critics are showing bias and hypocrisy when they condemn Qatar. Observers agree that Qatar has had to deal with more criticism than ... END_OF_DOCUMENT_TOKEN_TO_BE_REPLACED

All organisers use major sporting events like this year’s FIFA World Cup in Qatar primarily to advertise their country and promote a slick public image. This is not something we ... END_OF_DOCUMENT_TOKEN_TO_BE_REPLACED

Lamya Kaddor, MP for Germany’s Green Party, visited Qatar with a group of parliamentarians. In interview with Claudia Mende, she advocates a differentiated picture and urges that ... END_OF_DOCUMENT_TOKEN_TO_BE_REPLACED

COP27 in Sharm el-Sheikh is turning into a PR disaster for Egypt’s military regime. Instead of praise for the host, the news is full of solidarity for imprisoned activist Alaa ... END_OF_DOCUMENT_TOKEN_TO_BE_REPLACED

Comments for this article: A Culture of Religious Fanaticism

The western world has been a victim of fanaticism of different ideologies, religious fanaticism, racism and ultra-nationalism. Despite that the western thinkers managed to create modern world which we all enjoy today. The west is a beacon of hope for future of our civilization.
We (muslims) on the other hand are burden to earth, we have contributed nothing in shaping modern times since 14th century however our destructive contributions are enormous.
What my request to fellow humans that not to let go of us, we will eventually not only going to destroy ourselves but you people too. West must support liberal and secular factions with in Muslim societies in order to secure collective better future.
What west has witnessed is tip of an iceberg. Here liberals and secular daily face receive threats and have difficulty in changing minds of people.
So far the mistake I have seen by the western world that they try to change minds of Muslims by standard humanist procedures. Such practice will not produce any positive outcome. The fanatic armed factions should be crushed by militaries and western government must put immense diplomatic pressure on Muslim governments to take action. Furthermore military equipments should be provided to Islamic countries with strict audit.
There are many groups who are preaching secular values with in Muslim societies, they need your moral support such as giving space on your media (both print/electronic), their recognitions by words of support for them.

I have not lost hope in humanity, I know for sure that one day we will change the Muslim psyche.
Sincere regards
Muhammad Ali Rao

END_OF_DOCUMENT_TOKEN_TO_BE_REPLACED
Social media
and networks
Subscribe to our
newsletter