Since the outbreak of unrest in the Arab world began, the al-Qaida terrorist network has remained conspicuously silent. Can the current democratization process of Arab regimes relegate al-Qaida into insignificance? Nadar Alsarras offers some answers

Staying in the shadows during these historical upheavals in Arab countries: Osama Bin Laden has remained silent since the outbreak of the Arab revolutions

​​"Al-Qaida has been groping in the dark" – "The Arab popular uprisings have disappointed al-Qaida" – "Al-Qaida merely watches as history flies past." These and similar headlines found in the international press in recent weeks offer a brief analysis of the current state of the terrorist network.

The media reports all concur in one respect: Al-Qaida has played no significant role in these revolutions. The events of the past months has demonstrated an unbridgeable gap between what al-Qaida propagates and what Arabs have demanded during the demonstrations.

"This is a gap that has always existed," says the Hamburg Islamic scholar Albrecht Metzger. "Yet, on account of some partially successful terrorist attacks in Arab countries and in the West, we have believed that the al-Qaida organization is more powerful than it is in reality."

The recent developments show even more so, continues Metzger, that al-Qaida represents a minority in the Arab world and that they are unable to convince a majority of the population in their ideology of a holy war.

Deprived of the ideological raison d'être

Mohammad Abu Rumman is also convinced that in addition to the dictators, al-Qaida will emerge as the biggest loser in this historic transformation. He is a researcher and Middle East expert at the Centre for Strategic Studies at the Jordanian University in Amman. 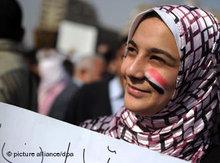 No opportunities for extremists: Islamic scholars and Middle East experts all agree that the influence of radical Islamists on the protests carried out by the younger generation during the "Arab Spring" has been minimal to non-existent

​​Al-Qaida, says Abu Rumman, has never spoken for Arab youth. "Al-Qaida offered its own answers to the general political crisis of Arab regimes. This crisis was characterized by the assumption that a peaceful, democratic transformation was not a possible option."

Yet, the desire for democracy among the Arab people and the demand for social justice, equality, and pluralism are diametrically opposed to the principles of al-Qaida, says Abu Rumman. This has deprived the terrorist network of its ideological raison d'être.

Experts have also found Osama bin Laden's silence to date as remarkable, considering that he is usually not sparing with his commentaries via video recordings.

It appears as if he has not found the appropriate words in light of the recent massive upheavals, wrote Yassin Musharbash recently, al-Qaida expert with the German news magazine "Der Spiegel". According to Musharbash, "Al-Qaida has not been at the head of the avant-garde, but rather urbane, Internet-savvy young people throughout the Arab world." The result is that the head ideologist of the terrorist network no longer fits in the picture.

Despite the inability of al-Qaida to come to grips with modern social networks like Facebook and Twitter, the terrorist network has not remained completely at a loss for words after the events in Egypt. In a Youtube video, Ayman Al-Sawahiri attempts to reinterpret the revolts in Tunisia and Egypt according to his world view. 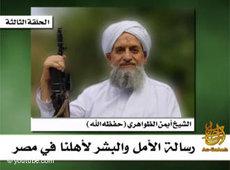 Propaganda from the al-Qaida network has not completely fallen silent during the protests, writes Alsarras. In a Youtube video, Ayman Al-Sawahiri attempts to provide an Islamist interpretation of the revolts in Tunisia and Egypt

​​The number two man in al-Qaida sees the events as Islamic revolts against un-Islamic despots. Sawahiri rejects democracy as a secular form of government in which "everything depends upon the mood of the majority".

This form of government, therefore, is for him un-Islamic. Such an understanding of democracy is far removed from the demands of the demonstrators in Libya and Egypt.

As a whole, most experts on al-Qaida and the Middle East agree that the irrelevance of the tired and familiar slogans of the terrorist network could prove the undoing of the organization and relegate al-Qaida into insignificance. Real democratization and the establishment of rule of law would make the group superfluous once and for all.

Yet, this might not occur to the same extent everywhere, warns Muhammad Abu Rumman. The influence of al-Qaida is not equal in all states. "In Libya, for example, where tribal culture plays a strong role, or in Yemen, where social differences are great, the situation is quite different from that in Tunisia or in Egypt."

No reason for complacency

A political vacuum in these countries might also allow al-Qaida to establish itself and win popularity. And should the rulers of Libya and Yemen refuse to allow a peaceful and democratic transformation and thereby plunge their countries into chaos and civil war, al-Qaida could capitalize from the situation.

The Islam expert Albrecht Metzger also does not advocate complacency. The role of Islamist groups in countries where no democratic structures exist should not be underestimated.

Pakistan, for example, is a country that has recently moved out of the spotlight. "This is a very important country for jihadism, because radical Taliban there are attempting to take over power and, in principle, determine social and political structures. I believe that this will be a significant battlefield for al-Qaida. The Arab world, for the moment at least, will not be."

The Role of the Muslim Brotherhood in the Egyptian Uprising
Political Grey Areas
The Muslim Brotherhood remains an important factor in Egyptian politics. If free and fair elections do eventually take place in Egypt, it would certainly garner a large number of votes. Is this a cause for concern? Answers from Albrecht Metzger

Al-Qaida's Third Generation on the Web
Terrorist Franchising
Al-Qaida has launched its first online magazine in English: Inspire. With Islamist propaganda and instructions for do-it-yourself bombs, it is aimed at supporters from the west. Emad M. Ghanim reports