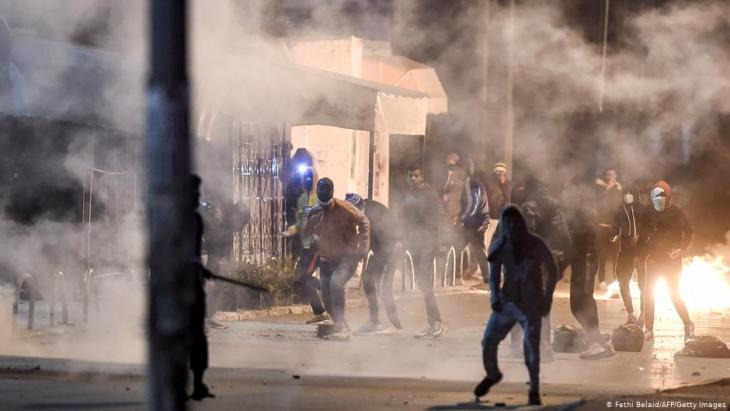 Recent unrest shouldn't come as a surprise to anyone who's followed Tunisia's trajectory. The image of the North African country as the only "survivor" of the uprisings in the region is misleading, writes Sarah Mersch

The recent unrest in Tunisia is the result of an accumulation of frustration, lack of perspective and hope, and economic hardship worsened by the coronavirus pandemic. The strict lockdown over the long weekend of the 10th anniversary of the ousting of former dictator Zine El Abidine Ben Ali backfired. It sparked a wave of nationwide protests, preceded by a growing number of sit-ins and demonstrations over the past months.

It leaves a bitter taste to see that ten years into what started out to be an inclusive democratic process, many young people once more feel excluded from public life. Many of those out in the streets were children when Ben Ali's regime was toppled and never consciously experienced life in a dictatorship.

Yet the people and the structures they contest today are largely the same as they were a decade ago: a system that doesn't allow them to thrive, and a state which, in the absence of infrastructure and basic services for its citizens – especially in marginalised areas – is first and foremost represented by security forces. 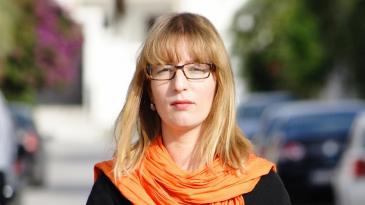 A bitter taste in the mouth: "Ten years into what started out to be an inclusive democratic process, many young people feel excluded once more from public life. Many of those out in the streets were children when Ben Ali's regime was toppled and never consciously experienced life in a dictatorship," writes Sarah Mersch

Repression remains the order of the day

Lacking a clear reform process, and with several repressive laws still in place, the police forces still represent repression rather than protection for many Tunisians today.

Citizens' demands, worries and everyday struggles are rarely recognised outside of election campaigns; taking to the streets seems to be the only way for many young people to make their voices heard.

The inability of the various political actors of the past decade to find solutions that go beyond creating meaningless jobs for young people in an already inflated administration clearly shows the limits of the so-called culture of consensus.

While it may have saved the country from breaking apart by including disparate political forces in the early years after the uprising, that culture of consensus is what is paralysing Tunisia today.

Politicians spend most of their time trying to achieve this consensus, rather than looking for solutions to some of the most pressing issues: reforms in the administrative, security and judiciary sectors, or unemployment and subsidy policies. That which would require making obvious and uncomfortable decisions.

Over the last 10 years, nine different heads of government — and even more cabinets — along with recurring fights in Tunisia's fragmented parliament have all pointed to the dire need of a minimum of stability to implement reforms, rather than just more talk.

But careful — neither Tunisian politicians nor international donors should be deceived into confusing stability with autocratic structures. Many European governments supported Ben Ali for way too long, turning a blind eye to the repressive nature of his regime and falling for his tale of stability and protection against extremist movements and migration.

Tunisia's current situation is also the result of these decades of oppression, and a political elite that is still struggling to adjust. But with one difference: today, Tunisians are no longer keeping quiet.

In Doha, Arabs from Morocco, Tunisia, Egypt and Algeria are gathering to celebrate the first ever FIFA World Cup to be held on Arab soil. The criticism from Europe? Over the top, ... END_OF_DOCUMENT_TOKEN_TO_BE_REPLACED

After a two-year hiatus, the Arab League re-convened at the beginning of November in Algiers against a backdrop of uncertainty and discord. By Pierre Boussel END_OF_DOCUMENT_TOKEN_TO_BE_REPLACED

In the run-up to the COP27 global climate summit, hosted by Egypt in November, it is worth noting that little rainfall, aggressive heatwaves and worsening drought make the Middle ... END_OF_DOCUMENT_TOKEN_TO_BE_REPLACED

Tunisia's economic and political instability and the increasing reluctance of Europe to take in job-seeking migrants is leading many Tunisians to head for sub-Saharan Africa in ... END_OF_DOCUMENT_TOKEN_TO_BE_REPLACED

The history of Jews and Muslims is far more entangled than you might imagine – but you have to listen out for it. In "Recording History", Christopher Silver takes us on a sonic ... END_OF_DOCUMENT_TOKEN_TO_BE_REPLACED
Author:
Sarah Mersch
Date:
Mail:
Send via mail

END_OF_DOCUMENT_TOKEN_TO_BE_REPLACED
Social media
and networks
Subscribe to our
newsletter