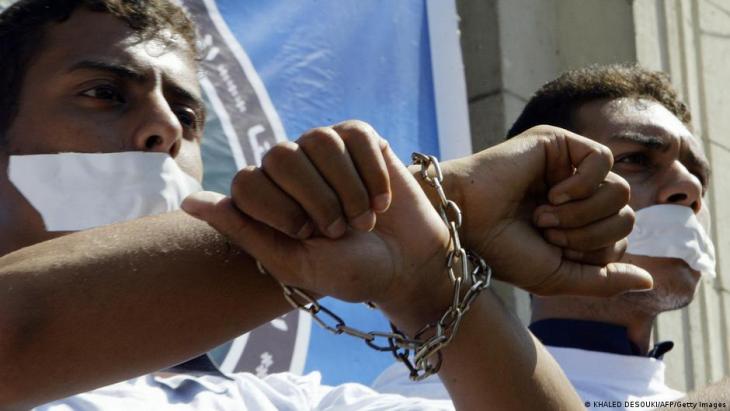 A prominent rights group in Egypt, the Arabic Network for Human Rights, is ending operations just as the country braces for a controversial NGO law. Is this the beginning of the end for civil society in Egypt? By Jennifer Holleis

Egypt's human rights defenders, however, lost a prominent pillar last week. On 10 January, the renowned Arabic Network for Human Rights (ANHRI) said it was ending operations "in the absence of the bare minimum of the rule of law and respect for human rights".

The decision followed police arrests and threats against the network's team. "There were also attempts to forcibly recruit some of our team to work as informants and spies against ANHRI," said Gamal Eid, the founder of ANHRI.

The decision was announced on the day of a deadline requiring non-governmental organisations in Egypt to register under a controversial NGO law. The law is set to come into effect this year. The law that was drawn up in 2019 places severe curbs on the work of civil society groups and gives the government sweeping powers to monitor and control the organisations' work and funding.

It also bans NGOs and civil society groups from collaborating with foreign organisations, conducting opinion polls or publishing their results without governmental approval. Moreover, it prohibits any work that undermines "national security" or is deemed "political". In cases of violation, organisations face fines of up to one million Egyptian pounds (€52,500).

The Arabic Network for Human Rights Information decides to suspend its activitieshttps://t.co/H6nOjXT7HL pic.twitter.com/GSknFylvBD

The same day ANHRI announced its closure, 17 Egyptian and international human rights organisations – including Amnesty International, Human Rights Watch and the Cairo Institute for Human Rights Studies (CIHRS) – issued a joint statement, calling on the "Egyptian parliament to repeal the NGO law and work with independent human rights organisations to adopt a new legislative framework upholding the right to freedom of association in accordance with international law and standards".

However, Egypt's President Abdul Fattah al-Sisi claimed that the new law will protect human rights and allow "organisations to establish themselves simply by giving notice to the authorities rather than obtaining the government's permission." He also reiterated the need for this law as an "integrated approach and global treatment of human rights in Egypt," at the World Youth Forum, which took place last week in Sharm el-Sheikh.

The deadline to register under the controversial NGO law comes just a few days ahead of the 11th anniversary of the Egyptian uprising, or the 25 January Revolution. The uprising eventually ousted long-time President Hosni Mubarak. He was succeeded by the Islamist Mohammed Morsi, who was overthrown in a coup d'état, which was led by the then Minister of Defence, Abdul Fattah al-Sisi, who eventually became president in 2014. 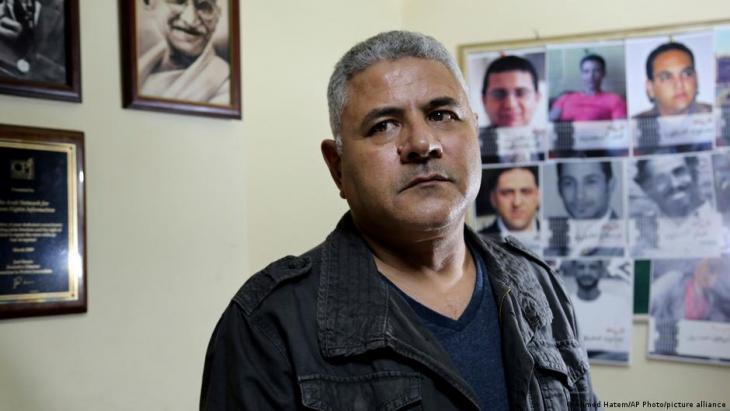 No reason to stop defending human rights: Egypt's 2022 Year of Civil Society may not look promising, but, ANHRI-founder Gamal Eid remains committed: "I will work as an independent lawyer on the cases related to prisoners of conscience, such as the case of Hammed Oxygen, Amr Emam, and dozens of cases against young prisoners of conscience who are not well-known, and from cities outside Cairo." Suspending ANHRI's work is "not a defeat or giving in. A more adequate term would be a 'warrior's rest'," says Eid. "We cannot give in to dictatorship and being deprived of the state of justice and human rights"

Ever since, the situation for civil and human rights organisations has been deteriorating. A widespread crackdown has left thousands of dissidents and journalists in jail. The Committee to Protect Journalists now ranks Egypt as one of the world's worst jailers of journalists.

Hafsa Halawa, visiting scholar with the European Council on Foreign Relations (ECFR), said this week's events are a culmination of years of attacks against Egypt's civil society.

"While the law and its registration requirements are a contributing factor, the environment in which the Egyptian civil society has been forced to try to work in over the last decade is incredibly dangerous and the regime's intention – with crackdowns, detentions and judicial investigations rather than enforced closures – has been to put the onus on organisations to make such decisions to halt activities themselves," explained Halawa.

Indeed, several human rights organisations have already left Cairo and have since relied on sources and information from the remaining activists and groups like ANHRI. "The closure of ANHRI, one of Egypt's oldest and most respected human rights NGOs, exemplifies the existential threat faced by Egypt's human rights movement," emphasised Hussein Baoumi, Amnesty International's Egypt researcher.

He said he hoped that the international community would stand up to the Egyptian state's vicious crackdowns by establishing, for example, a monitoring and reporting mechanism on the human rights situation in Egypt at the UN Human Rights Council session in March.

"If not, ANHRI won't be the only human rights group to close down," he said.

It's a view echoed by Human Rights Watch. The group published its annual report on Thursday with calls, urging Western leaders to "do better" against autocrats.

"The international community cannot allow the state's decimation of Egypt's once vibrant civil society to continue with no cost," commented an HRW representative. For HRW, there is no doubt that the NGO law, if it does come into effect, "will make independent human rights work nearly impossible". 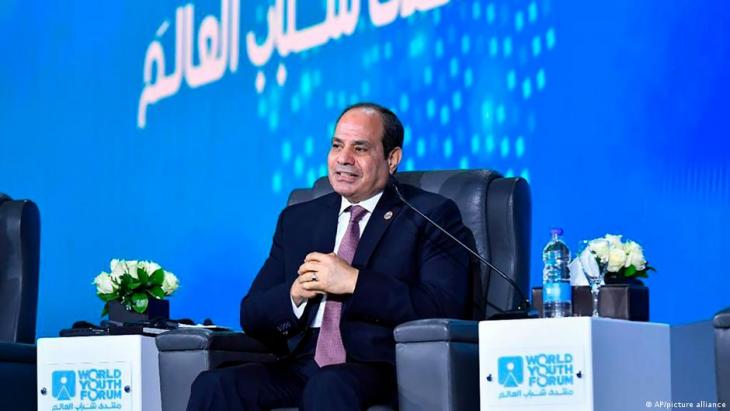 Cold comfort for activists at Sharm el-Sheikh: Egypt's President Abdul Fattah al-Sisi reiterated the need for the new NGO legislation as an "integrated approach and global treatment of human rights in Egypt" at last week's World Youth Forum. He claims the new law will protect human rights and allow "organisations to establish themselves simply by giving notice to the authorities rather than obtaining the government's permission"

Another human rights group, Dublin-based Front Line Defenders has been providing small-scale financial support for security and protection of human rights organisations in Egypt. It's been monitoring the latest developments closely.

"For us, ANHRI's work was a pillar as they were a credible source; they made us aware of cases and more marginalised human rights defenders that otherwise wouldn't be known to other human rights organisations," admitted Adam Shapiro, head of communications & visibility at Front Line Defenders. The organisation will explore how to continue supporting Egyptian human rights defenders at risk, in light of the new law that bans foreign funding.

So far, the brief record of Egypt's 2022 Year of Civil Society – a national strategy for human rights that was announced by Sisi in September 2021 – doesn't look promising for human rights defenders, including for ANHRI-founder Eid. However, for Eid, this is not a reason to stop defending human rights.

Eid says suspending ANHRI's work is "not a defeat or giving in. A more adequate term would be a 'warrior's rest'," he said. "We cannot give in to dictatorship and being deprived of the state of justice and human rights."

The murder of a female student at Mansoura University in the Nile Delta has sparked a long overdue debate on femicide in Egypt. Karim El-Gawhary reports from Cairo END_OF_DOCUMENT_TOKEN_TO_BE_REPLACED

Syria, Egypt, Saudi Arabia and the UAE are among those countries increasingly misusing cybercrime legislation to silence dissent and curb freedom of speech. Could a new global ... END_OF_DOCUMENT_TOKEN_TO_BE_REPLACED

Egypt hopes to jump-start the action needed to face a warming world when it takes the presidency of major UN climate talks in November, but warns that countries need a "reality ... END_OF_DOCUMENT_TOKEN_TO_BE_REPLACED

A ceasefire has been in effect in Libya for the past year and a half. Yet after Russia's attack on Ukraine, another proxy war looms in Africa's most oil-rich country. Mirco ... END_OF_DOCUMENT_TOKEN_TO_BE_REPLACED

It is the biggest order in the history of the Siemens Group: a 2,000-kilometre railway network for high-speed trains is to be built in Egypt. But the project raises numerous ... END_OF_DOCUMENT_TOKEN_TO_BE_REPLACED

Archaeologists have discovered 250 sarcophagi and 150 bronze statues during excavations in the necropolis on the western bank of the Nile. ... END_OF_DOCUMENT_TOKEN_TO_BE_REPLACED
Author:
Jennifer Holleis
Date:
Mail:
Send via mail

END_OF_DOCUMENT_TOKEN_TO_BE_REPLACED
Social media
and networks
Subscribe to our
newsletter