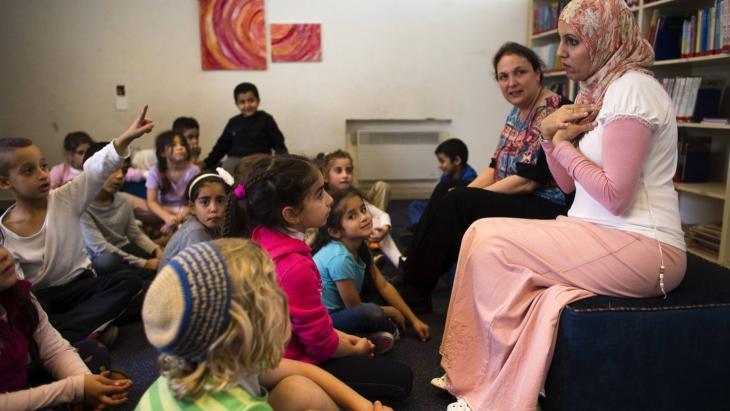 Arabs and Jews in Israel
You can't tear us apart

Israeli society is divided. Most Israeli Arabs and Jews live in separate worlds. Most, but not all. Andrea Backhaus presents three inspiring examples of co-existence in Israel

The day after the attack, Fadi stood in the burned-out classroom and stared at the heap of ashes at his feet. The perpetrators had piled up the books and copybooks belonging to the first graders, doused them with petrol and set them on fire. The walls still flaunted their ugly message: "Death to Arabs" and "No co-existence with the cancer". When Fadi looked down at the charred pages of the Arab and Hebrew books, he thought, "This does not belong in our world."

Fadi, an Arab Israeli, moved from Haifa to Jerusalem with his family a year ago. His son attends the Max Rayne Hand in Hand School, one of the most famous teaching facilities in Israel, offering pupils a Jewish–Arab education. On this same afternoon, Fadi met with other parents, teachers and children at the school's spacious campus in the south of Jerusalem. They came to sing Arab and Jewish songs, dance and play together. Their message was simple: "You can attack us, but you can't tear us apart."

The Hand in Hand School, established in 1998, is the only bilingual Arabic–Hebrew school in Jerusalem and is regarded as a shining example of respectful co-existence. The school is located directly on the Green Line between the Jewish district of Pat and the Arab district of Beit Safafa.

Some 620 pupils from kindergarten to Grade 12 are taught in Hebrew and Arabic by Jewish and Palestinian teachers. The textbooks are written in Arabic and Hebrew. In addition to the normal curriculum, the children are taught about the various holidays celebrated in Islam, Judaism and Christianity, as well as being introduced to the issues of ethnic background and tradition.

The Hand in Hand School is more than just a place of learning. It is a revolutionary bulwark in the middle of an explosive environment, which has known little more than war, retribution and prejudice since the founding of Israel in 1948.

The indefatigable hope of reconciliation

The arson attack in late November, perpetrated by activists of the Jewish right-wing extremist Lehava organisation, clearly demonstrates the immensity of the challenges facing the facility. Israeli society is divided. Most Jews and Arabs live in completely separate worlds. They live in different districts, send their children to separate schools and shop in different stores. Some elements in society seek to subvert any attempt at co-operation. A number of peace projects have simply given up in the face of increasing tensions. Many, yes, but not all. There are still those who maintain the hope that reconciliation between both peoples can be achieved.

Another example is that of Micah Hendler and the Jerusalem Youth Chorus, a vocal ensemble for secondary level students in East and West Jerusalem. Two years ago, the Yale graduate from Maryland established the choir. One of its members even comes from Ramallah on the West Bank, beyond the separation wall built by Israel. Another comes from the Jewish settlement of Efrat. Every Monday, the 43 Palestinian and Israeli choir members rehearse for three-and-a-half hours in the Old City of Jerusalem, across the street from the legendary King David Hotel, the site of important political decisions since its construction in 1931. They sing in Arabic, Hebrew and English about community, loss and homeland; they film music videos that they post on YouTube, write songs together and listen to each other.

After every rehearsal, the choir members divide up into groups and, in the presence of those in charge, talk about their everyday lives, the obstacles they face and their hopes. "Many singers talk quite openly with their friends about the choir. They are proud of it and are not shy about conveying this at home," says Hendler, a 25-year-old American Jew, who spent his summer in the "Seeds of Peace” Palestinian-Israeli peace camp, before deciding to move to Jerusalem.

He began by soliciting all of the city's schools, presented himself to classes and unceasingly promoted his choir. Although some schools refused his requests to make a presentation, the number of people interested in the project grew and grew. He also puts this down to the fact that he knows the conflict lines and could present his project in Arabic and Hebrew.

Since then, Hendler's Jerusalem Youth Chorus has far more applicants than openings. And its activities have similarly grown in scope. This past summer, the singers toured Japan. The have just returned from Britain, where they appeared on the BBC programme "Newsnight" and performed songs with Miel de Botton, sister of the writer Alain de Botton, and Duran Duran. "The choir gives the singers the feeling of belonging to a community," says Hendler.

Returning to Fadi at the Hand in Hand School: "Al-Salam aleikum," he calls out in Arabic as Ilan, his friend and father of two children at the school, approaches. "Shalom," responds Illan in Hebrew. Ilan comes from a conservative Jewish family and was never able to play with Arab children as a young boy. A guitar is being tuned in the school's library. A Jewish father sings a song about love and forgiveness in Arabic. Ilan listens while Fadi sways and smiles. "We parents consciously chose this school," he says. "We want to change things."

Rita Boulos would also like to change things. She is the director of the visitors' centre of Wahat al-Salam–Neve Shalom, a village community where Jews and Arabs live together and share responsibilities and administrative duties. The village was founded in 1972. There are currently 30 Arab and 30 Jewish families with Israeli citizenship living in the village, which is located at an equal distance from Tel Aviv, Jerusalem and Ramallah. The local school, attended by Jewish and Arab children from the community as well as from surrounding villages, teaches classes in both languages.

In the village's inter-regional educational facility, Jewish and Palestinian teachers, journalists, lawyers and students of other faculties have the opportunity to learn about each other's viewpoint. One issue, for instance, is that of Israel's Independence Day. For the Jews, this is a day of celebration, whereas for the Palestinians, who refer to it as 'Al Nakba' (the catastrophe), it is a collective trauma. Another issue has to do with the city of Jerusalem, which has been declared the capital city by both Jews and Palestinians. "When they hear historical facts about the other group, they start out by saying, 'This can't be true'. But then they gradually open up," say Boulos.

There are sometimes disputes among the residents of the village, such as when Israelis are called up for their unavoidable military service. "An Israeli sees it as his duty, but from the point of view of the Palestinians, he is serving the military of the occupier."

The village, which has been nominated for the Nobel Peace Prize on numerous occasions, is financed by the residents and with the help of a network of friends. There is no state support for the project. "The government resists our attempt to truly overcome the conflict," says Boulos. Nonetheless, the initiators have no intention of giving up. In two years time, another 34 families will be living in the village, and in ten years, there should be a total of 150 families. Hundreds of applications have already been submitted. The director of the visitors' centre says, "Our approach is the only way. If we want to live in an open society, then we have to live with each other."

Home
Print
Newsletter
More on this topic
The Hand in Hand School in Jerusalem: Peaceful co-existence in the school playground"East Jerusalem/West Jerusalem" by David Broza: ": A combined effort of the mind, the heart and the soul"Israeli-Palestinian relations: Dialogue in a time of conflictCombatants for peace: Marching for a ceasefire
Related Topics
Dialogue of Religions, Education, Israeli-Palestinian conflict, Israeli-Palestinian dialogue, Musical worlds, Places of Dialogue
All Topics

With reported hostilities against Israeli journalists and the flag of the Palestinian territories flying on the streets and in the stadiums, it is clear the World Cup in Qatar is ... END_OF_DOCUMENT_TOKEN_TO_BE_REPLACED

When is it and when is it not acceptable to display a political banner at the World Cup in Qatar? The answer seems to depend largely on the political message, with fans ... END_OF_DOCUMENT_TOKEN_TO_BE_REPLACED

A leading light of Israeli theatre, Ofir Henig has directed the Israel Festival and is the only female director to have been awarded the Israel Theatre Prize. These days, however ... END_OF_DOCUMENT_TOKEN_TO_BE_REPLACED

With the current leadership of Iran quick to lay the blame for the Iran protests on Israel, the chances of harmonious relations between the two countries still seems remote. Yet, ... END_OF_DOCUMENT_TOKEN_TO_BE_REPLACED

Daniel Barenboim is not only a world-famous pianist and conductor. He has also worked tirelessly to foster understanding and reconciliation between Palestinians and Israelis. By ... END_OF_DOCUMENT_TOKEN_TO_BE_REPLACED

After a two-year hiatus, the Arab League re-convened at the beginning of November in Algiers against a backdrop of uncertainty and discord. By Pierre Boussel END_OF_DOCUMENT_TOKEN_TO_BE_REPLACED
Author:
Andrea Backhaus
Date:
Mail:
Send via mail

END_OF_DOCUMENT_TOKEN_TO_BE_REPLACED
Social media
and networks
Subscribe to our
newsletter