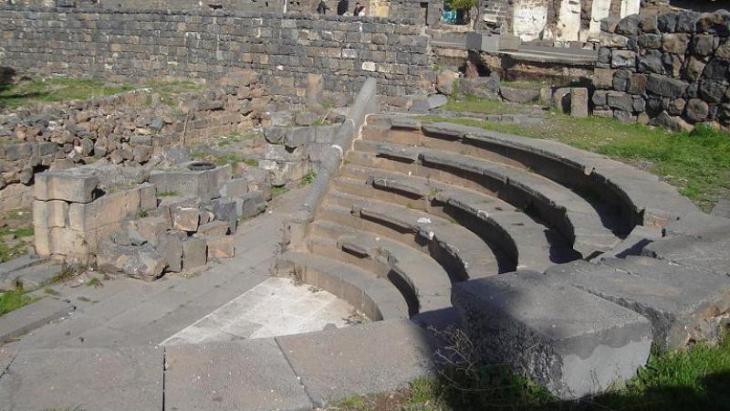 The Druze region in southern Syria, home to numerous archaeological treasures, is still regarded as one of the strongholds of the Assad regime. But that may soon change. Will Suwaida become the next Palmyra? By Joseph Croitoru

In the southern Syrian city of Suwaida – just as in the eponymous province – fears of an attack by opponents of the Assad regime have been growing in recent weeks. Militia belong to Islamic State continue to advance from the east, while those of a rebel coalition steered by the radical Islamist Nusra Front are approaching from the west.

In the eyes of both these rival Sunni jihadist camps, the residents of Suwaida, viewed as the last bastion of Assad loyalists in the far south of the country, are infidels – because they are Druze, members of a religious community that is rooted in mediaeval Shiism with an Ismailitic character, but that has distanced itself from Islam through the addition of neo-Platonic elements and the belief in reincarnation.

Because of their common Shia origins, the Druze were virtually the natural allies of the Syrian Alawites, who form the bedrock of the Assad regime. But this is not the only reason the advancing holy warriors view them as enemies. There have also been chapters in the history of Suwaida that the Islamists would prefer to see completely erased from memory.

In ancient times, the city was called Dionysias, and continued the traditional wine cult of the Nabataeans who had settled there previously. Although the Druze are forbidden to drink any kind of alcohol, viticulture still plays an important economic role in the region, and the Suwaida coat of arms features grapes as well as apples – in a basket held by a Druze woman in traditional costume.

The white, translucent veil worn by Druze women, which only lightly covers the hair, is probably just as much as thorn in the side of the jihadists as the two other emblems on the city crest.

One is an equestrian statue in honour of Sultan al-Atrash (1891–1982), a national hero for both the Druze and the Syrians, who led a rebellion against French colonial rulers between 1925 and 1927. The equestrian statue and the monumental memorial dedicated to al-Atrash and his comrades in Sultan al-Atrash's birthplace, Quraya, 15 kilometres to the south of Suwaida, are threatened with the same fate as all memorials that the Islamist militiamen associate with the regime and its secular-nationalistic culture: they will be demolished straightaway or even blown up.

The same fate could also befall the Roman-era ruins, also depicted on the Druze city crest, of which people in Suwaida are no less proud. 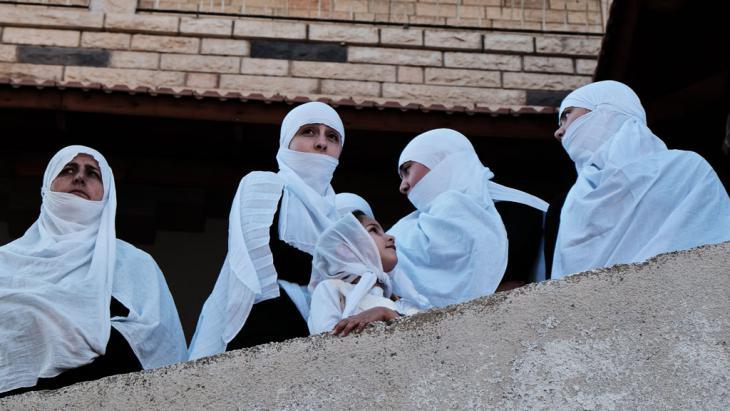 Druze women in the Golan Heights. Says Joseph Croitoru: "In the eyes of both these rival Sunni jihadist camps, the residents of Suwaida, viewed as the last bastion of Assad loyalists in the far south of the country, are infidels – because they are Druze, members of a religious community that is rooted in mediaeval Shiism with an Ismailitic character, but that has distanced itself from Islam through the addition of neo-Platonic elements and the belief in reincarnation"

As a result, the municipal monument conservation authority and the museum are understandably on high alert. The museum, a rectangular building clad in the black basalt that is typical of the region, holds in its collections not only archaeological remains dating from the Nabataean era, but also well-preserved mosaics and epigraphs from the Greco-Roman era and artefacts from the Byzantine and Islamic periods. The collection was initiated by the Frenchman Gabriel Carbillet, who governed the Druze territories in the years 1924 and 1925 and who had a passion for archaeology. He was notorious for the repressive methods with which he pushed through his ambitious modernisation programmes.

These projects – among them the foundation of the first ever museum of archaeology in Suwaida – were sometimes completed using forced labourers and essentially provided the local Druze sheikhs, whose traditional rule Carbillet was attempting to undermine, with justification for the Druze rebellion against French colonial rule.

The original museum, replaced by the contemporary structure in 1990, was set up by the French archaeologist Maurice Dunand (1898–1987), who also conducted numerous excavations in the surrounding area and who compiled the first catalogue of the museum's collection in 1934.

The museum in Suwaida has been more or less completely off limits to the public for weeks, officially because of "renovations". Back in May, there were complaints from the Syrian opposition that the entrance to the museum was being guarded by soldiers "with an Alawite accent" who were not from the local area.

There are claims in rebel media that regime henchman are now also commandeering museum treasures in Suwaida. These reports say that the Syrian dictator plans to use the proceeds from their sale to finance his war against the civilian population.

It is indeed the case that most Syrian museums are now largely empty. Officials at the Syrian authority for antiquities and museums vehemently deny accusations of artefact theft. As its director, Maamoun Abdulkarim, repeatedly insists, arrangements were made in good time to bring the most valuable and transportable Syrian museum artefacts to safety – either close to Damascus or in the capital itself.

The rebels, whom the government describes as terrorists and also accuses of stealing artefacts, do not believe this account. The Damascus weekly newspaper "Souriatna" ("Our Syria"), published and distributed in rebel-held areas, also recently reported on what it described as "theft" in Suwaida and interpreted the events as a clear indication that Damascus had long decided to abandon the city.

Such claims put cultural officials in Suwaida in a tight spot. In an interview with the state news agency "Sana", the head of the local monument conservation authority Hussein Zain al-Din offered assurances that the museum's key exhibits had in the meantime been put in safe storage. But his statement only served to further fuel scepticism among the residents of Suwaida. 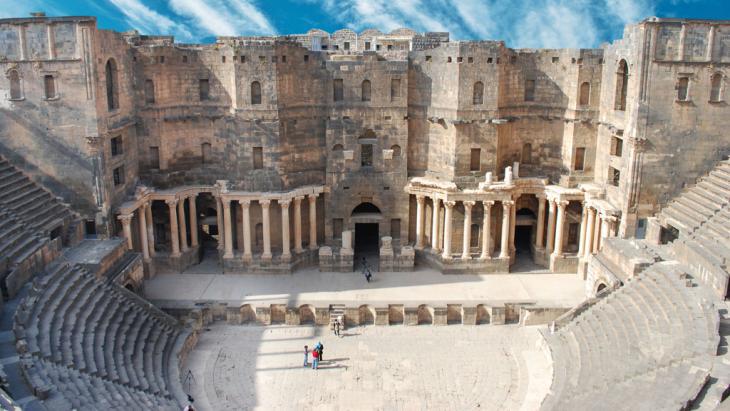 A glorious World Heritage Site: the amphitheatre in Bosra. According to Croitoru, the rebels are making every effort to portray themselves as the guardians of Syrian cultural heritage. Very soon after the capture of Bosra in March by a rebel coalition, "an operation to clean the city's ancient ruins was begun and filmed for publication on the Internet"

They also interpret measures to secure the more than 2,000 exhibits in the museum's collection – an operation that has already been in progress for some time and that can barely be concealed from public view – as a sign that Damascus will soon sound the retreat and leave them in the lurch. A short time later, this impression was further consolidated by museum director Nashat Kiwan who, in an interview with a local television broadcaster eventually caved in to the presenter's persistent questioning and admitted that some of the exhibits had been taken to Damascus for security reasons. Kiwan did, however, insist that the work currently going on in the museum was "renovation".

This explanation has not, however, convinced the wing of the local Druze community that in any case no longer gives much credence to avowals of support from the Assad regime. It is led by Sheikh Wahid Balus, who has in the past issued a call for the Druze to take up arms again – something that Damascus has systematically moved to prevent over the years – and who was, as a result, slapped with a religious ban by other members of his faith who are loyal to Assad.

Balus has been sharply critical of both the evacuation of museum stocks and the clearing of the central provincial bank depot by the government. It is striking that his rhetoric echoes that of the rebels on this matter. Like the latter group, the Druze leader now maintains that the artefacts were not transferred to Damascus at all, but to the northern Syrian coastal town of Latakia, an Alawite stronghold.

Presenting themselves as guardians of Syrian cultural heritage

For their part, the rebels are making every effort to present themselves as the true guardians of Syrian cultural heritage. For example, some 30 kilometres to the south of Suwaida in the city of Bosra, also famous for its archaeological treasures – among them a very well preserved Roman theatre.

Very soon after the capture of the city in March by a rebel coalition – albeit one only partially controlled by the Islamist Nusra Front – an operation to clean the city's ancient ruins was begun and filmed for publication on the Internet. In the meantime, both the Syrian antiquities authorities and the local monument conservation office claimed credit for the initiative.

But when all this happened, the local director appointed by Damascus had long since fled the city. His successor, appointed by the rebels, is now primarily concerned with compiling long lists of the artefact thefts allegedly carried out while his predecessor was in office as well as documenting damage to local cultural heritage sites allegedly carried out by government troops.

A lot is happening in Syria’s Sweida Governorate – foreign intervention there is unprecedented both in terms of scale and number of actors – yet Damascus remains the dominant ... END_OF_DOCUMENT_TOKEN_TO_BE_REPLACED

When she ascended the throne, millions of Muslims still lived under British rule. Later, Elizabeth II appealed for tolerance in a multi-religious society. She was the first ... END_OF_DOCUMENT_TOKEN_TO_BE_REPLACED

The documentary "The Other Side of the River" shows how women in the Kurdish regions of northern Syria fight for their rights under the most difficult conditions. By Aviva ... END_OF_DOCUMENT_TOKEN_TO_BE_REPLACED

Following months spent considering a military incursion into northern Syria, Turkey now appears to want talks with Syria to ensure security and the return of refugees. From ... END_OF_DOCUMENT_TOKEN_TO_BE_REPLACED

In this essay, renowned Lebanese journalist and writer Hazem Saghieh asks whether the Arab Levant, which stretches from Iraq in the east to Egypt in the west, will remain an ... END_OF_DOCUMENT_TOKEN_TO_BE_REPLACED
Author:
Joseph Croitoru
Date:
Mail:
Send via mail

END_OF_DOCUMENT_TOKEN_TO_BE_REPLACED
Social media
and networks
Subscribe to our
newsletter