Breaking a Taboo in Akdamar

After almost 100 years, thousands of Armenians have flocked to the southern Anatolian city of Van to attend a religious service in the Church of the Holy Cross. The event marks a turning point in how Turkey treats its Christian minorities. A report by Susanne Güsten 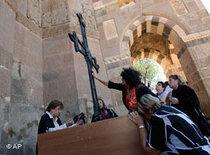 An atmosphere of reconciliation: Armenians celebrate the first mass in Akdamar in 95 years

​​ An ancient building on an island deep in southern Anatolia has become a symbol for a new beginning in modern Turkey.

On 19 September, Armenian Christians from all over Turkey and from abroad assembled on the island of Akdamar on Van Lake to attend a religious service in the more than one thousand year old Church of the Holy Cross. In the process, the guests and their hosts peacefully broke a long-standing taboo.

For the first time in 95 years, Armenians were permitted to celebrate a religious ceremony in the region – and they were not received by the Turks of Van with hostility, but rather with open arms. This event, however, does not mean that complete freedom of religion has been established over night in this country seeking membership in the EU. Yet, many are of the opinion that the religious service marks a break with the past and that there is no going back for Turkey.

The church on Akdamar, located on the picturesque, blue Van Lake and surrounded by high mountains, is one of the most frequently photographed motifs in Turkey. Now, it has become the scene of a historical new beginning. Van is not just an indiscriminate location in the painful history of Turks and Armenians. In 1915, the historic city of Van, a centre of Armenian life in the Ottoman Empire until the First World War, became engulfed in bloody conflict between the different ethnic groups living there.

Armenian rebels killed Turkish and Kurdish civilians in Van, and Armenians were murdered by Kurds and Turks here, a fact often cited by Turkish apologists when countering accusations of genocide against Armenians. The violent events in Van are therefore used as evidence to argue that it was actually the Turks who were the victims at the time. 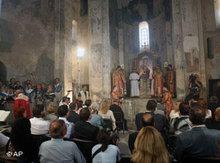 "Nowadays, a local journalist in the depths of Anatolia can speak of the guilt he feels about the Armenian massacre without being strung up from the next tree; instead he is celebrated," writes Susanne Güsten

​​ And it is precisely at this location that a shift in thinking has taken place. One reason is the proximity in which Turks, Kurds, and Armenians once lived here. Almost a hundred years after the massacres, many people in the region express the feeling that there should be a greater legacy than just hatred and enmity.

One of these people is Aziz Aykac, who publishes a local newspaper in Van. He appealed to the citizens of Van to warmly welcome Armenians coming to celebrate the religious service and even to offer them lodgings in their homes. His words met with resounding success and Aykac has suddenly become something of a celebrity.

A feeling of guilt

"I am a Kurd, but my grandfather could still speak Armenian quite well. His neighbours were Armenians," says Aykac. He recently explained to the historian Baskin Oran why the local population of Van supported his efforts towards reconciliation. "People have unconsciously been burdened with a feeling of guilt – we have killed and driven away our neighbours."

Oran, a professor from Istanbul, knows how dangerous such words could be in Turkey, even just recently. In the past, he has been the target of Turkish nationalists, because he has spoken out in favour of recognizing the genocide of Armenians. The Turkish-Armenian journalist Hrant Dink was shot dead on the street by right-wing extremists. Orhan Pamuk, Nobel laureate for literature, stood trial for allegedly "insulting Turkishness".

Some 4,000 people made the journey to the thousand-year-old Church of the Holy Cross on the island of Akdamar on Lake Van; due to a lack of space, many of the faithful had to follow proceedings on screens outside the church

​​ Today, a local journalist in the heart of Anatolia can speak of a sense of guilt on account of the massacre – and he isn't hung from the nearest tree, but rather celebrated. Oran therefore wrote a series of articles entitled "Breaking the taboo in Akdamar" for the Istanbul newspaper "Radikal".

Even the authorities in Van welcomed the Armenians. Governor Münir Karaloglu expressed the hope that the border to Armenia would soon be opened and for an increase in the number of Armenian tourists, who could provide the poor province with a much-needed source of income.

Critics have accused the authorities of organizing the historical religious service as a mere public relations spectacle. In Armenia, as well as the USA, the event was therefore boycotted by a number of groups.

Yet, the Armenian guests in Akdamar saw things differently. Petros Boyacan, an Armenian doctor who travelled from Syria for the event, regards the permission to hold the ceremony as "a positive step." Although this hasn't solved all the problems, at least a start has been made. "One flower does not make summer," says Boyacan, quoting an old proverb. "And this here is a flower."

Message to the EU

This is not the first such event. In August, the Turkish government gave permission to hold a similarly significant religious service for the Greek-Orthodox Church at the Sumela Monastery in north-eastern Anatolia. Just as the Armenians will now be allowed to hold a religious ceremony once a year on Akdamar, the Orthodox Christians can do the same in Sumela. 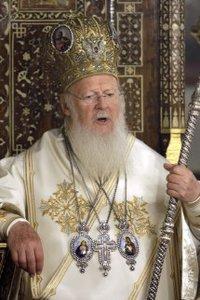 The Greek-Orthodox Ecumenical Patriarch of Constantinople, Bartholomew I: in August, the Turkish government authorised the saying of a Greek-Orthodox mass in the ancient monastery of Sümela in north-eastern Anatolia

​​ For Prime Minister Recep Tayyip Erdogan, these gestures indicate his readiness to strengthen the rights of Christian minorities in Turkey and also serve as a message to the West, especially the EU.

Last summer, Erdogan met with representatives of all Christian denominations and of the Jewish community and assured them that his government stood for freedom of religion. Under his government, it is at least theoretically possible to build new churches for the first time in decades. Confiscated properties should also be returned to Christian communities.

Representatives of Christian groups continue to stress that the Erdogan government is far more flexible towards religious minorities than previous governments, yet many reforms are hampered by the bureaucracy and the courts.

The Greek-Orthodox Patriarch Bartholomew I has referred to the development as "positive, but slow" in talks with German Minister Thomas de Maizière during his trip to Turkey. Despite the political will of the government, the reforms have not led to enough concrete results for Christians, said Maizière. "The results are not satisfactory."

In this light, the religious service for Armenians on Akdamar serves as a further sign of Ankara's political will, although it is one step forward on a long path.

The story, however, doesn't end here. According to the historian Oran, the consequences of this break with the past in Van are far-reaching. "Breaking the taboo has two effects. First, there is the domino effect, which applies to other taboos. Then – and even more importantly – a complete way of thinking has finally been pushed aside."

Greek Orthodox Liturgy in Turkey
Uncovering the Country's Non-Muslim Cultural Heritage
The Turkish government's decision to allow the Orthodox patriarch to celebrate a liturgy at the ancient Panagia Soumela Monastery near Trabzon indicates that Ankara intents to further strengthen the rights of religious minorities in the country. Iason Athanasiadis reports from Trabzon

Turkey's Aramaean Minority
More Than Just Mor Gabriel
Driven out by economic hardship and discrimination at local and state level in the 1960s and by forced evacuations in the 1990s, Southeastern Turkey's Aramaeans are starting to return home, only to find that their ancestral lands no longer belong to them. Ayse Karabat reports

END_OF_DOCUMENT_TOKEN_TO_BE_REPLACED
Social media
and networks
Subscribe to our
newsletter