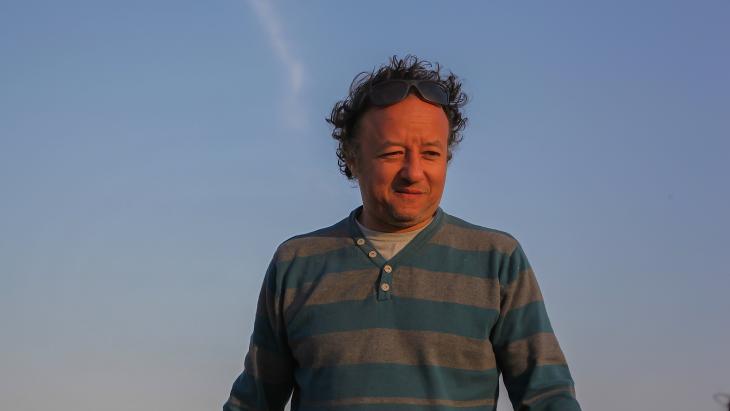 In Egypt, several human rights activists working for the EIPR – Egyptian Initiative for Personal Rights – were arrested recently following a meeting with EU ambassadors. One of them is Gasser Abdel Razek, a long-time friend of Middle East correspondent Karim El-Gawhary. In this highly personal report, El-Gawhary writes about his friend’s detention

It was something we’d feared for a long time. That one day it would come to this. Gasser Abdel Razek’s work was just too much of a thorn in the side of Egypt’s rulers. As executive director of one of the last remaining human rights organisations in the country, he was well aware of the dangers. He knew that by publishing information on indiscriminate arrests, torture, unfair trials, the death penalty, the curtailment of media freedom and the right to assemble, he was running a constant risk and that one day it would be his turn.

When Muhammad Basheer and Karim Ennarah, two members of staff at the Egyptian Initiative for Personal Rights (EIPR) led by Gasser Abdel Razek were arrested on 15 November, this danger loomed ever larger. The two were detained following a meeting with 13 ambassadors and embassy representatives, most from the EU – including the German ambassador to Cairo – at the organisation’s offices. The diplomats were provided with information on the human rights situation in Egypt. Gasser was convinced that the meeting with the diplomats was the trigger for the detention of his colleagues. He had a suspicion what might happen next.

Gasser sent his wife and two sons to the Faiyum Oasis, one-and-a-half hours from Cairo, packed his bag and waited at home to be picked up himself. And on 19 November, that is precisely what happened. He was interrogated by public prosecutors on the night of his arrest and officially charged the next morning with membership of a terrorist organisation. He is also accused of endangering state security with false reporting.

Since then, I’ve been staring at my computer screen for hours on end. How should one report on these arrests with objectivity and the requisite journalistic distance? How should one write about a nation where journalism itself has already spelled the downfall of some colleagues?

I want to be honest: I’ve got a problem with distance and objectivity here. Gasser has been one of my closest friends in Egypt for many years. That’s why I asked him to be my best man last year. When I was in Iraq for weeks in 2004 reporting on the war there, Gasser helped out with my children in Cairo, who were very young at the time. They’re grown up now, but Gasser will always be an "uncle" to them. 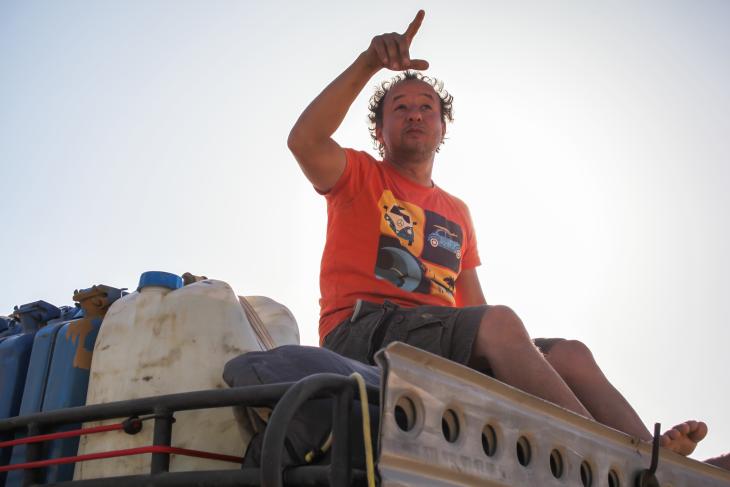 "Then he packed his bag and waited at home to be picked up himself." That night, the Egyptian State Security in Egypt arrested Gasser Abdel Razek, director of the Egyptian Initiative for Personal Rights (EIPR)

I recall the many trips we made together through the Egyptian desert; when we would let our cars slip and slide over the sand dunes for days, digging them out whenever they got stuck. I think of when we sat around our campfire at night in the world’s most beautiful five-million-star hotel. This was when we would often talk at length about the human rights situation in Egypt, while Gasser, an enthusiastic cook, would prepare one of his legendary gourmet meals on a spirit stove in the middle of the desert.

He was as passionate about his work as he was about cooking. On the matter of which human rights should be defended, he didn’t make any distinctions. Regardless of whether it was under Hosni Mubarak, toppled in 2011, the President of the Muslim Brotherhood Mohamed Morsi or the former military chief and current head of state Abdul Fattah al-Sisi, for 25 years Gasser defended all those whose human rights were violated in Egypt. It didn’t matter to him whether these people were secular, Islamist, Communist, liberal or veiled, whether they sported a Salafist or Che Guevara beard, whether they had suffered discrimination for being Christian or gay. For Gasser, all people have the same rights. I knew few people with such clear-cut principles.

So how should one now write objectively about one’s arrested friend? Gasser was questioned again by public prosecutors last Monday. His head had been shaved bare. He told his lawyers who were present that he was being kept in isolation in the notorious Tora prison in Cairo, in a cell with a metal bed but no mattress or covers. He had nothing but the thin clothes he was wearing when he was arrested. He said that his warm clothes had been taken from him, just like all his other personal belongings. He told the lawyers that he was cold. Last night I lay awake in my warm bed and thought of my friend in his cold cell. How can I report his story objectively?

Share concern re. #Egypt's arrests of three employees of the Egyptian Initiative for Personal Rights. Meeting with foreign diplomats is not a crime. Nor is peacefully advocating for human rights. https://t.co/hR5JtLcAYI

What’s the point of international protest?

One could write about the worldwide reactions to Gasser’s arrest. The office of the UN High Commissioner for Human Rights demanded Gasser’s immediate release; a call echoed by UN Secretary General Antonio Guterres. The European Union and members of the EU parliament denounced his detention. Numerous governments of countries whose ambassadors were present at the meeting with Gasser in Cairo registered their protest, including German human rights commissioner Barbel Kofler.

Naturally, international human rights organisations such as Amnesty International and Human Rights Watch came out in support of Gasser, whose organisation they have consistently supplied with information all these years. Perhaps most seriously for the regime in Cairo: the man nominated by Joe Biden as the future U.S. Secretary of State, Anthony Blinken, tweeted his disapproval of Gasser’s arrest: "Meeting with foreign diplomats is not a crime. Nor is peacefully advocating for human rights," he wrote.

But one could also pose the question: what is the point of all these international protests if they can’t even secure a mattress for Gasser’s bed? Outwardly at least, the Cairo in regime has thus far been defiant. The Egyptian foreign ministry rejects all interference in domestic affairs and accuses the Egyptian Initiative for Personal Rights of violating existing laws. 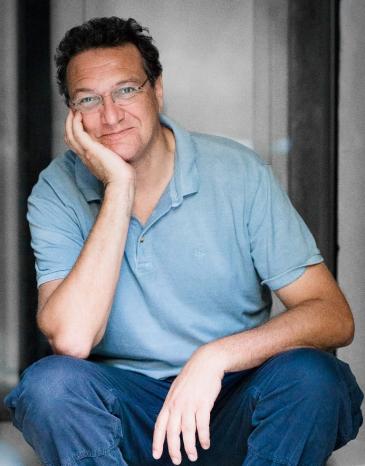 Middle East correspondent for various German-language newspapers since 1991, Karim El-Gawhary has managed the ORF Middle East office in Cairo since 2004. Prior to this, he worked for five years as a representative of the ARD broadcasting studio in Cairo. In 2011 he received the "Concordia Presse-Preis", in 2012 he was elected Foreign Journalist of the Year, in 2013 he was named Journalist of the Year in Austria, in 2018 he received the Axel-Corti-Preis. His book "Repression und Rebellion: Arabische Revolution - was nun?" was recently published in German by Kremayr & Scheriau

Another question is just how serious are the many messages of protest? After all, in many western capitals, Arab autocrats like Sisi are seen as purported guarantors of stability in the region, as bulwarks in the fight against terrorism and as partners preventing refugees from making the journey over the Mediterranean.

Moreover, these nations hope to earn money from future arms shipments to Egypt. The nation on the Nile is now the world’s third-largest arms importer. Top suppliers include the U.S. and France. A third of the total volume of armaments shipped to Egypt from 2015 to 2019 comes from French manufacturers.

Good journalism means being close to the people

This year, Egypt tops the chart for German arms exports with a volume totalling 585.9 million euros thus far. Thyssenkrupp has supplied Egypt with four submarines. Further arms contracts are currently being negotiated with Italy to the tune of 9.8 billion dollars. Although my friend Gasser in his cold prison cell appears very small in comparison, he is in fact a towering figure.

When Gasser was transported back to prison by public prosecutors on Monday, his wife Mariam caught a brief glimpse of him through the tiny barred windows of the prisoner transport van. The only message Gasser was able to give her was: "Mariam, tell the kids I said hello, I love you." She has to wait 30 days before she can visit him in prison.

I have repeatedly argued that for me, good journalism means being right up close to the people. I always wanted to turn the objects of reporting into subjects, who tell their stories to then allow readers to form their own opinions.

Tomorrow, I’ll visit Mariam and their two sons. I’ll sit with them at the kitchen table, where I’ve often spent many happy hours laughing, playing and debating. We’ll talk about Gasser, my friend and best man, who is in a prison cell just a few hundred metres away, accused of being a "terrorist". And it’ll be too close for me to able to report on it objectively.

[Ed: On 28 November, Gasser's wife and mother were allowed to visit him in prison. He has now been allowed food, clothing and sanitary effects, but is still in 24 hr solitary confinement. No visit yet for his colleagues Karim or Basheer.]

Abortions are illegal in Egypt unless they are necessary to save a married woman's life. But that doesn't stop local women from having one. Egyptian society needs to acknowledge ... END_OF_DOCUMENT_TOKEN_TO_BE_REPLACED

Food prices doubled, salaries halved, banks restricting withdrawals: Egyptians now have the same problems as the Lebanese. But if things get worse here, the fallout will be far ... END_OF_DOCUMENT_TOKEN_TO_BE_REPLACED

Giessen, Eichsfeld, Kusel, Berlin – cars bearing old German number plates are the latest trend on the streets of Cairo. Many Egyptians regard the discarded plates as chic. What ... END_OF_DOCUMENT_TOKEN_TO_BE_REPLACED

Egyptian Sufis have been on the defensive against the country's Islamists for decades. Meanwhile, interest in mysticism is growing among the young members of Cairo’s middle and ... END_OF_DOCUMENT_TOKEN_TO_BE_REPLACED

Chinese President Xi Jinping's visit to Saudi Arabia in December 2022 may have rattled Washington, but it simply highlighted the Arabs’ desire to diversify their foreign relations ... END_OF_DOCUMENT_TOKEN_TO_BE_REPLACED

END_OF_DOCUMENT_TOKEN_TO_BE_REPLACED
Social media
and networks
Subscribe to our
newsletter