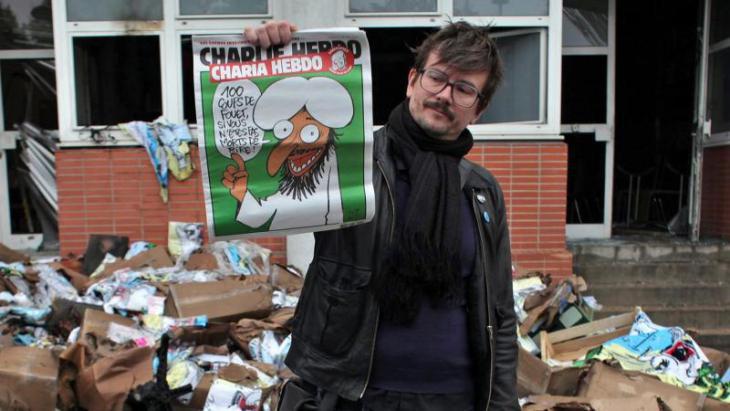 ﻿The attack on the French satirical magazine "Charlie Hebdo" represents an attack on media freedom and the freedom of expression – even if the special edition's chosen title – "Charia Hebdo" – in reference to election results in Tunisia appears quite ill-judged. Bernard Schmid reports from Paris

﻿Speculation in the case of the weekly satirical magazine Charlie Hebdo continues more than a week after the event. On the night of 1 – 2 November two-thirds of the magazine's offices in Paris were destroyed in a fire. The blaze was triggered when a firebomb was thrown at the building. The fire at the editorial offices of the left-wing liberal publication broke out around 1am.

The following morning the newsstands were selling an especially sensational edition of the paper, which is famous for its anti-clerical, derisive stance. Titled Charia Hebdo ("Sharia Weekly"), it stated that the issue's guest editor was non other than the Prophet Mohammad.

A connection between the two events cannot be ruled out, but has so far not been proven. Some of the journalists working on the magazine have expressed suspicions that the attack could also have been the work of right-wing extremists seeking to fan the flames of existing social tensions. 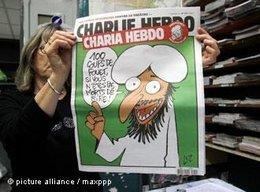 "100 lashes if you don't die laughing" – For a title story alluding to the Islamist election victory in Tunisia, the 2 November edition of "Charlie Hebdo" was renamed "Charia Hebdo"

​​The publication's website was also targeted by hackers. The originators have since been identified as a group of young hackers from Turkey known as Akincilar.

One of them, 20-year-old Ekber alias "Black Apple", admitted to hacking the site in the Journal du Dimanche. He explained that his group wanted to register its protest to what it deemed to be an insult to the Prophet Mohammad. But at the same time, Ekber and the other Akincilar activists have distanced themselves from the firebomb attack: "Of course, we do not advocate violence of any kind," said Ekber.

For the editorial team at the satirical magazine, their special "Charia Hebdo" edition was primarily a reaction to the results of elections in Tunisia and the announcement by new leaders in Libya that Islamic Sharia law would be the source of legislation.

The decision to run this title was undoubtedly wrong, as it is an inaccurate and misleading reference to the recent outcome of the Tunisian poll. The winning party, "Ennahda", or "Renaissance" did not make any pledge to introduce Sharia law during its campaign. On the contrary, it advocates the retention of existing civil and family legal codes.

"Ennahda" has in the meantime also announced that while it will retain the first article of the current constitution, which states that Islam is the religion of Tunisia, it will otherwise leave the subject of religion out of the text of the new constitution.

The constituent assembly elected on 23 October is responsible for hammering out a new constitution within a year in Tunisia, which is making its transition to full democratic governance for the first time. The introduction of an alleged theocracy such as Iran is not to be expected at all. Not because the strongest party to be viewed as moderate Islamic had to issue a blank cheque in a bid to win confidence, but because social circumstances in Tunisia would be completely against such a system. 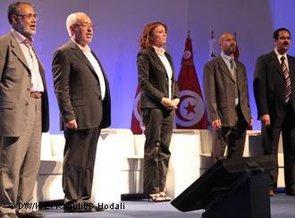 ​​The reasons why "Ennahda" performed so well are more to do with the party's contemporary political image: Voters were finally able to reward its brave and committed opposition to the dictatorship of Ben Ali, which resulted in the incarceration of some 30,000 political activists and innumerable cases of torture.

In addition, "Ennahda" linked its liberal economic course to social pledges, even though some of the latter will almost certainly not be realized (just as in the case of other parties).

Prejudiced and out of touch with reality

So the choice of title and reference to the Tunisian elections are based on a prejudice that does not correspond with reality. Nevertheless, Charlie Hebdo cannot be accused of having a racist motive, as this is a publication that treats all religious communities with equal irreverence – Catholics in France, for example. This has actually been the satirical magazine's declared trademark brand of humour for many years. Any accusations of racism raised thus far are totally off the mark.

In spite of this, following the attack the newspaper received unexpected support from people with definite racist intentions – for example from Marine Le Pen of the right-wing extremist Front National, who spoke of an "attack on French laicism". Support also came from the right-wing conservative Interior Minister Claude Guéant – currently facing criminal charges for alleged racist utterances. He paid a "solidarity visit" to the devastated offices of Charlie Hebdo.

But journalists at the magazine have bridled against these attempts at political manipulation. At the end of last week, a four-page supplement of the publication was distributed with the daily newspaper Libération, which has provided temporary offices for Charlie Hebdo journalists.

The supplement sarcastically questions Claude Guéant's sudden outpouring in favour of freedom of expression – by referring to the fact that in 2010, it was Guéant who ordered the illegal bugging of several journalists in a bid to locate "leaks" within the government. So not all expressions of solidarity are welcome.

For the time being, Charlie Hebdo will be produced from the offices of the social-liberal daily Libération. The Paris city authority has already pledged to assist the editorial team in its search for a new home.

No other Western poet was arguably so well-versed in the Koran or so fascinated by Islam as Germany's national hero, Goethe. In a new publication that examines all Goethe's ... END_OF_DOCUMENT_TOKEN_TO_BE_REPLACED

The disappearance of Razan Zeitouneh and her colleagues has been one of the greatest mysteries of the Syrian war – until today. DW's investigative unit hunted clues across six ... END_OF_DOCUMENT_TOKEN_TO_BE_REPLACED

Who’s financing, planning and commissioning terror attacks in Europe? This investigative documentary follows a trail that leads to Pakistan’s intelligence service, the ISI, which ... END_OF_DOCUMENT_TOKEN_TO_BE_REPLACED

The Libya Conference will be held in Berlin on 23 June. Much has been achieved since the last Libya Conference in Berlin in January 2020. The ceasefire is holding, there is a ... END_OF_DOCUMENT_TOKEN_TO_BE_REPLACED
Author:
Bernard Schmid
Date:
Mail:
Send via mail

END_OF_DOCUMENT_TOKEN_TO_BE_REPLACED
Social media
and networks
Subscribe to our
newsletter