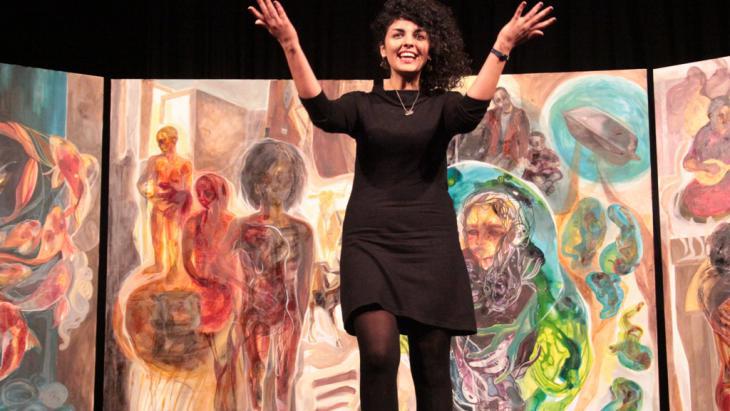 Once upon a time in a land far away, there existed a storytelling tradition known as "naghali". Iranian artist Golnar Tabibzadeh was inspired by this tradition to combine art and storytelling for her project "The Forgotten", which tells some of the heart-rending personal stories behind the daily news. Marian Brehmer spoke to the artist about her project and the Iranian art scene

Young Samir loved telling stories. A good story let him pretend to be one of his favourite characters. He liked playing within the high walls of the ancient citadel in his hometown of Aleppo, imagining himself to be a hero in his castle, until one day missiles struck his home and his mother ran out onto the street, her dress on fire. That was the day he stopped talking.

The audience has gone absolutely silent. The speaker, dressed all in black, recounts Samir's fate in a loud, accentuated voice. Then an Arabic melody wafts out of the darkness. First softly, then growing louder and louder, until an emphatic voice dominates the entire theatre.

Like a woman wailing in grief, the Syrian soprano Dima Orsho sings her heart out. The music and narration are supported by five artworks that stand side by side on the stage. All of the characters in the stories being told are depicted on the canvases in vibrant colours.

If we didn't know how dramatic these stories were, Golnar Tabibzadeh's pictures might make an almost cheerful impression. The brightly coloured and loosely painted motifs, which sensitively illustrate the tales being related, look like fairy-tale images. The author of the piece, entitled "The Forgotten", which was performed at the Morgenland Festival Osnabruck 2014, is a spirited and lively young artist. But when she tells of the intention behind her project, Golnar Tabibzadeh is very serious indeed. 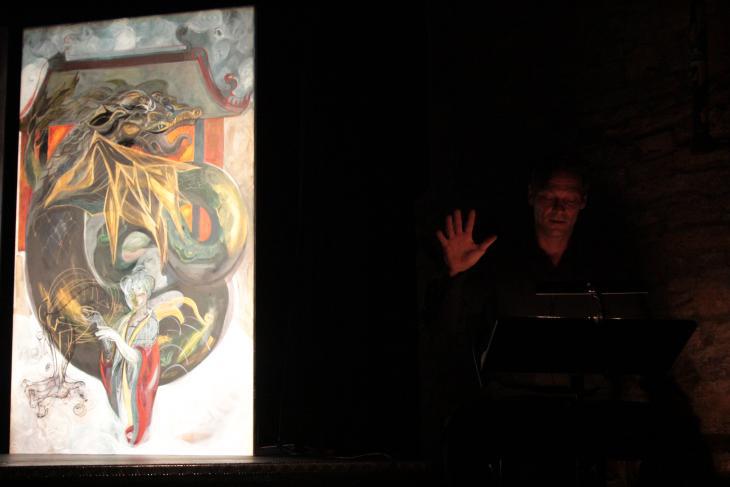 Breaking with media constructs and traditional conventions: the stories told in "The Forgotten" are set in today's world. These modern tales have roots documenting current realities. In this way, the project tries to show that heroes and villains, good and evil aren't as clear-cut in the real world as they are in fairy tales. And yet there are people whose struggles in life and whose ultimate survival are much more heroic than anything we could imagine

The reality behind the news

With "The Forgotten", the Iranian artist wanted to convey her personal take on what is happening in the world: "Because we are constantly barraged with information, we lose touch with the reality behind the headlines," says Tabibzadeh. She found her stories – most of which deal with children – in the news and social media and rewrote them to create enthralling legends that reveal things that have been hidden for some time.

When Tabibzadeh came to Germany for the first time, she marvelled at all the luxuries enjoyed by those living in Europe. "I was also surprised at how people here manage to avoid anything that makes them sad," she says.

"The Forgotten" is a confrontation with the naked human reality of war, death and hunger. "Naked" is a word Tabibzadeh uses often when she describes her ideals as an artist. She strives to cast off all masks and costumes and to express her innermost feelings on canvas. "In a country like Iran, you get used to quickly switching between different personas in your everyday life. Painting was for me a way to let off steam while living under so many social constraints," she says.

Tabibzadeh derived her carefully co-ordinated mix of images and texts from "naghali", an old Iranian narrative tradition. Large "naghali" paintings could once be seen throughout the streets of Iran. Based on the sequences depicted, a narrator would spin his tale, usually taken from the great Persian heroic epics or the legends of the Shia saints. But today, "naghals", or storytellers, are few and far between and can mainly be found on stage. Tabibzadeh describes "naghali" pictures as resembling the paintings in many European churches that depict biblical tales.

Golnar Tabibzadeh was born in Tehran four years after the Islamic revolution. She completed her art studies in the years following the presidency of Mohammad Khatami, who brought a breath of fresh air to the art market with his cautious reform policies. Tabibzadeh sees her own generation of artists as a bridge between her parents' generation and contemporary artists: "We all had a lot of pent-up energy. We wanted to change things and to create something of our own." 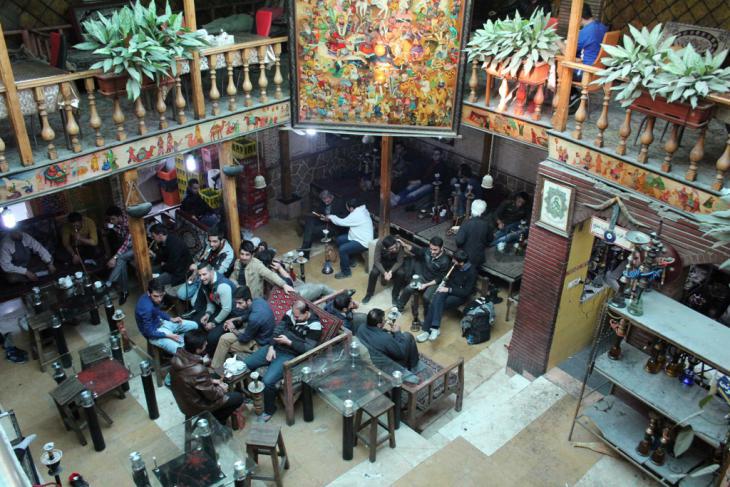 A typical naghali painting in a tea house in the Tehran district of Tajrish. "Large 'naghali' paintings could once be seen throughout the streets of Iran. Based on the sequences depicted, a narrator would spin his tale, usually taken from the great Persian heroic epics or the legends of the Shia saints. But today, 'naghals', or storytellers, are few and far between and can mainly be found on stage," writes Marian Brehmer

Give up or explode with creativity

Tabibzadeh's first exhibition took place in a Tehran gallery in 2002. But many of her images never made it onto the walls there, because the Iranian Ministry of Culture ("Ershad"), which inspects every work of art before it is shown in public, disapproved of her work. The censors continually force Iranian painters to find new forms of expression if they are to survive as artists, she explains. "The restrictions either cause artists to give up, or they induce them to veritably explode with creativity," she says.

Many of Tabibzadeh's images show women in various life situations. At times these figures seem vulnerable and despairing; at times they dance sprightly across the canvas.

Even if Tabibzadeh does not aspire to be a political artist, her motifs do reflect the experiences of Iranian women. In one picture, for example, which bears the title "Carpet Flowers", a garishly made-up woman helplessly stretches her arms up to the sky. Lipsticks and make-up compacts float around her head. A Persian rug with a floral pattern adorns the background – the carpet as the epitome of Iranian tradition and aesthetic perfection par excellence.

Golnar Tabibzadeh has been living abroad for three years. She first moved to Istanbul in 2011 and now lives in Berlin. "I feel at home in Berlin, even though I can imagine returning to Iran someday," she says. She explains that she still feels very connected to the art scene in Tehran, where she presented her most recent exhibition last year. She dreams of presenting "The Forgotten" in the Iranian capital in the near future.

At the end of the performance in Osnabruck, the audience seems completely lost in thought. They are palpably moved. It takes a moment before someone starts to clap. Just a few moments later, Golnar Tabibzadeh joins the narrators on stage. "This is exactly the kind of thoughtfulness I wanted to inspire," she says.

Home
Print
Newsletter
More on this topic
The Syrian art project "Cutting Away the Void": Documenting the tragedy of the Syrian revoltInterview with Kinan Azmeh and Dima Orsho: "All we can do is sing and play our hearts out"Interview with the Iranian theatre director Amir Reza Kohestani: "In Iran, art fills a void"Parastou Forouhar: Art as a political weapon
Related Topics
Art, Mohammad Khatami, Performing arts, Syrian Civil War, Visual arts, Women in the Islamic world
All Topics

Algeria‘s regime is again cracking down on anti-fracking activists and the unemployed in the country‘s south. Yet EU countries remain keen to scale up their energy cooperation ... END_OF_DOCUMENT_TOKEN_TO_BE_REPLACED

Bachtyar Ali sends the hero of his latest novel – "Mein Onkel den der Wind mitnahm" – literally flying. Jamshid is so thin after his years as a political prisoner that a gust of ... END_OF_DOCUMENT_TOKEN_TO_BE_REPLACED

For a century, the Kurds and other minorities in Turkey have been subject to state repression. With his dissertation "The Kurdish Question in Turkey", political analyst Ismail ... END_OF_DOCUMENT_TOKEN_TO_BE_REPLACED

Anti-Semitic motifs have no place at Germany’s documenta art show or anywhere else in the world, stresses Meron Mendel, director of the Anne Frank Educational Centre in Frankfurt ... END_OF_DOCUMENT_TOKEN_TO_BE_REPLACED

A new exhibition, "Syria – Against Forgetting", at Cologne’s Rautenstrauch-Joest-Museum focuses on Syria's artistic and cultural heritage and pays tribute to the country before ... END_OF_DOCUMENT_TOKEN_TO_BE_REPLACED

Madrid's about-face on the Western Sahara conflict has enraged Algeria. Trade relations have been frozen unilaterally and a cut in gas supplies to Europe could be in the pipeline ... END_OF_DOCUMENT_TOKEN_TO_BE_REPLACED
Author:
Marian Brehmer
Date:
Mail:
Send via mail

END_OF_DOCUMENT_TOKEN_TO_BE_REPLACED
Social media
and networks
Subscribe to our
newsletter