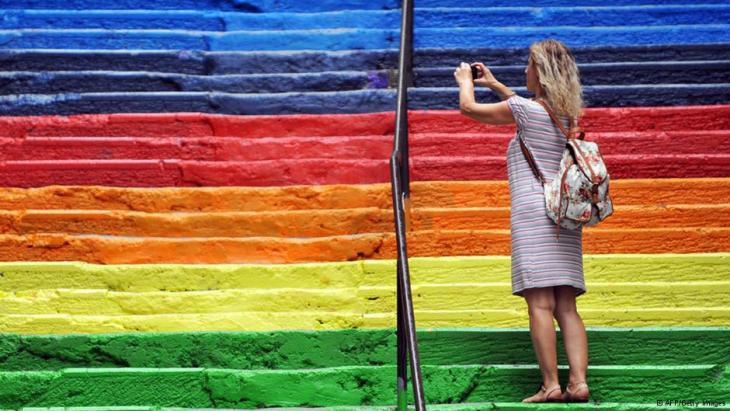 Art and protest in Turkey

Poking fun at the sultan

For about a year now, Turkey has been experiencing one of its worst ever political crises. It is a situation that has given the country's art scene a chance to flourish and to exercise its creativity in protest. However, such activity often entails the risk of serious consequences. By Senada Sokollu in Istanbul

Between corruption allegations, mass demonstrations and the debacle of the You Tube and Twitter bans, Turkish politics has been rocked by one scandal after the other over the past year. Nevertheless, this is obviously no reason for the people to get down in the mouth. Indeed the crisis has released a wave of artistic creativity in the form of graffiti, comics and music.

But it is not only the professional artists who are having all the fun; the man and woman in the street are also getting in on the act, creating their own artworks on house walls or making satirical use of photos and posting them on the Internet.

The artistic protest has been going on for almost a year now. Art provides an outlet for pent-up political frustrations and gives a means of expression otherwise denied people by a media that is largely government controlled. Since the Gezi Park protests last year, artistic protest has become all the rage. Performance artist Erdem Gunduz, for instance, dubbed the "standing man", has inspired millions with the silent standing protest vigil he undertook to express his disaffection with the government.

Musicians too have been busy composing songs that are giving the government a hard time. Take a trip into Istanbul's alternative club scene – to the "Araf" Club in the Beyoglu district, for instance – and you will more than likely hear a particular song played at last once in the course of the evening. Sung during the Gezi Park protests, it has become a kind of opposition anthem, taken up by millions, and a favourite at anti-government rallies. The title, "sik bakalim!" (shoot it at me!), refers to the use of tear gas and batons against demonstrators. Playing it is guaranteed to bring everyone onto the dance floor, jumping around and singing along enthusiastically.

Among the most impressive expressions of protest are the so-called rainbow steps. Dozens of flights of grey steps in Turkish cities were transformed overnight, painted in the colours of the rainbow as a symbol of peace and tolerance. 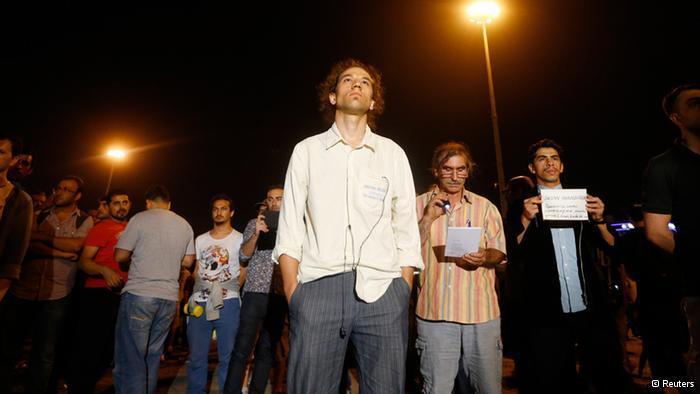 Silent protest: a form of peaceful resistance to Prime Minister Erdogan's authoritarian style of government. During the Gezi Park protests in June 2013, thousands of people across the country followed the example set by artist Erdem Gunduz (pictured here, centre) and carried out a "silent protest".

In recent times, Prime Minister Erdogan has become the favourite target of the artistic protests. His ban on Twitter was barely in place when the cartoons and caricatures criticising his authoritarian style of government began to appear everywhere. Images of him eating the blue Twitter bird, for example, or driving off in a van marked "democracy" loaded with the birds were splashed across the title pages of Turkish newspapers. Most popular of all was a cartoon depicting Erdogan surrounded by the fluttering birds, his head splattered with their droppings.

Daubed on the walls of Turkish cities, various tips and tricks on how to circumvent the internet blocks began to appear in the form of DNA graffiti codes.

The recent local elections provided another source of inspiration for artistic comment. The comic magazine "Penguen" featured a front page illustration showing a voter putting money into the ballot box rather than a voting slip. "We go to vote in the shadow of corruption and bribery", read the caption.

The Turkish problem with democracy

"Turkey has had a problem with democracy since the country's foundation. That's why we've always had satire – written, drawn and verbal. It's been around since the time of the Ottoman Empire. Back then, the satirists made fun of the sultan," says Hakan Bilginer, who set up the satirical magazine "Zaytung" in 2010 when the Turkish government was becoming more authoritarian, and journalists and the media were finding their freedoms under attack, he explains.

"We haven't had any problems with the government yet, because we are an independent magazine. The Turkish government controls the media through its business relations. Because we don't have any of those, we don't come under any direct pressure", explains Bilginer. The government, he says, knows all about them. "We even have members of the government following us in social media such as Facebook and Twitter. Some of them even share our posts because they find them funny," he says.

Admittedly the editors are careful when it comes to specific content. "We try to avoid getting ourselves into legal difficulties, so we never directly insult the government. But we always manage to find a way to say what we really think. Besides, we are in the humour business, so we have a little more licence," says Bilginer.

Caged bird of freedom: this cartoon shows the Turkish prime minister, Recep Tayyip Erdogan, driving a van that looks suspiciously like a police van, but is marked "democracy" and is full of blue Twitter birds

No reason for self-censorship

Unlike Bilginer, Tuncay Akgun has already had some run-ins with the Turkish government. He founded "Leman" 28 years ago following the military coup of 1980. With a circulation of 30,000, it is one of Turkey's most successful comic magazines.

"We are radical. Many of our artists have been in prison, including myself," he says. The magazine currently faces legal action. "The government is suing us. The case has gone before the European Court of Human Rights. We will probably get a heavy fine for insulting the prime minister. Our front page carried an illustration that depicted him raising his middle finger." Akgun has little faith in the independence of the Turkish courts. "In Turkey one never knows what might happen. We are prepared for anything."

As far as he is concerned, this is no reason for self-censorship. "It's what we do. If we were always thinking about what might happen to us, we could stop right now. We draw what we want to draw and whatever we think the public should know about." Akgun is proud of his fellow countrymen and women. "All of these drawings and graffiti in the city are just great. They are increasing by the day and are getting better and better." Art, he says, is an effective vehicle for political protest.

Turkey's parliamentary and presidential elections are scheduled for June 2023. But they are already casting a shadow. While the opposition is calling for early elections, ... END_OF_DOCUMENT_TOKEN_TO_BE_REPLACED

By stage-managing his re-election in a poll widely dismissed as a farce, Syria's President Bashar al-Assad has killed two birds with one stone: he has forced his compatriots to ... END_OF_DOCUMENT_TOKEN_TO_BE_REPLACED

Recep Tayyip Erdogan, disappointed by the European Union’s reluctance to integrate Turkey into its ranks, has re-directed his country’s diplomacy toward the Maghreb and Africa to ... END_OF_DOCUMENT_TOKEN_TO_BE_REPLACED

Having taken control of the traditional media, Turkish President Erdogan is now extending his reach to the social networks. A new law has been passed to rein in major digital ... END_OF_DOCUMENT_TOKEN_TO_BE_REPLACED

Although a unity government was formed in Libya in March 2021, tensions and possible crises between the political actors are already emerging. What problems does the country face ... END_OF_DOCUMENT_TOKEN_TO_BE_REPLACED

END_OF_DOCUMENT_TOKEN_TO_BE_REPLACED
Social media
and networks
Subscribe to our
newsletter