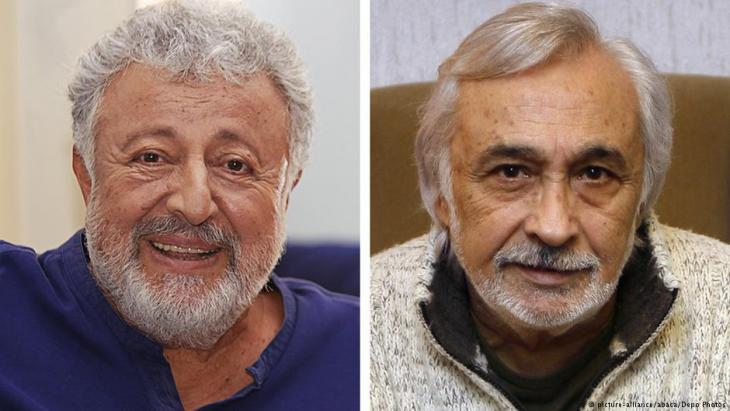 Turkish President Recep Tayyip Erdogan is cracking down on artists, strongly rejecting any criticism, even from those with conservative backing. But what does he hope to gain from the increasingly aggressive tirades? By Aram Ekin Duran

The most recent verbal feud involving the Turkish president sounds amusing at first. Film star Rutkay Aziz, 72, had a suggestion for Erdogan: "the president should try listening to Mozart and Beethoven. It might do him some good."

And, since the president opposes drinking alcohol, journalist Yilmaz Ozdil wrote in a column for the Kemalist-nationalist daily "Sozcu": "If Tayyip Erdogan had drunk just one beer, the situation in Turkey would be much better today."

Erdogan's response to both comments, given in front of AKP delegates at the beginning of January, refused to see the funny side: "trying to coerce a president whose disposition and attitude is unambiguous into drinking beer or listening to Mozart is the epitome of fascism."

"The epitome of fascism"

Aziz's reaction came via Turkish Arti TV broadcaster, which is based in Cologne, Germany. He never offered a piece of advice to Erdogan, he says. "I was told that Erdogan was going to visit a concert by world-famous pianist Fazil Say. What did I think about that? I replied that that was a very good idea. He'd be able to listen to Mozart and Beethoven. That would do him good."

Aziz is unable to understand why Erdogan called him a fascist: "It's impossible to fathom what is meant by fascism in this case. Am I a fascist? Is Mozart a fascist? If the latter was the case, I'd be in favour of protecting Mozart in the name of humanity." For Aziz, the case is closed. "I have drawn a line under the whole affair and do not wish to make any further comments."

Deniz Cakir, an actress who regularly appears in a popular TV series, became a target of Erdogan's wrath after engaging in a war of words with women wearing headscarves, a story that was picked up by newspapers close to the government.

The president went on to accuse Cakir of having told women with headscarves to "leave for Saudi Arabia." And this, said Erdogan once more, "is nothing but pure fascism. That's the attitude of the Republican People's Party CHP." The social democratic and Kemalist CHP is the largest opposition party in Turkey. The Public Prosecutor's Office has now launched an investigation against Deniz Cakir regarding accusations of "slander".

It's possible that the actual incident was quite different from the version disseminated by Erdogan and Turkish public prosecutors. After all, Cakir wrote on Twitter: "What has been stated in public is not true."

"Defamation of the president, threat of revolt and murder"

At the end of December 2018, Turkey's cultural scene was rocked by an even more far-reaching incident. Mujdat Gezen, 76 and Metin Akpinar, 78, are two of the country's acting legends; their films and theatre appearances are appreciated by conservatives and progressives alike. The two veterans have distanced themselves from current government policies. Appearing on Halk TV, a broadcaster close to the opposition, they directed critical remarks at the president. Erdogan subsequently labelled them "would-be artists."

But presidential ridicule was not all that Gezen and Akpinar were to face. An official investigation was launched against them, on grounds of "defamation of the president, threat of revolt and murder."

While some are beginning to protest the lockdown, others are unable to bury their loved ones in accordance with Islam. Here’s the latest from across the region END_OF_DOCUMENT_TOKEN_TO_BE_REPLACED

Istanbul has become a refuge for many Arab communities – including the Muslim Brotherhood – but its cosmopolitan ways are also changing them. By Mohanad Hage Ali END_OF_DOCUMENT_TOKEN_TO_BE_REPLACED

Coronavirus continues unabated. Iran remains a hub of infection, war-torn Syria has recorded its first case and Yemen is bracing itself for the worst. Here’s the latest from ... END_OF_DOCUMENT_TOKEN_TO_BE_REPLACED

Going by the official numbers, Turkey is doing well, especially in comparison to other countries. But does this impression correspond to the reality? There are significant reasons ... END_OF_DOCUMENT_TOKEN_TO_BE_REPLACED

Libyan political analyst Faraj Alasha argues that the Berlin conference on the Libyan war did nothing to change the fact that there is no political solution to end the war raging ... END_OF_DOCUMENT_TOKEN_TO_BE_REPLACED
Author:
Aram Ekin Duran
Date:
Mail:
Send via mail

END_OF_DOCUMENT_TOKEN_TO_BE_REPLACED
Social media
and networks
Subscribe to our
newsletter