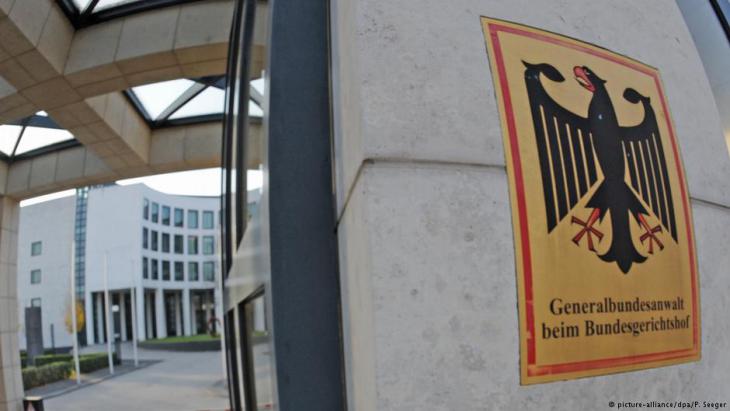 German public prosecutors in Karlsruhe are acting surprisingly fast to interview Syrian victims who have filed criminal charges against members of the Syrian intelligence agency in Damascus. Specific investigations and international arrest warrants could follow. By Kristin Helberg

Abir Farhud speaks mechanically. It's not the first time she's told the story of how the head of department 215 at the military intelligence service in Damascus commanded each and every woman to come to his office. Like all the others, she was also made to undress and he groped her breasts. That was December 2012. The 30-year-old Damascus art school graduate had taken part in a peaceful demonstration, smuggled medication through checkpoints and concealed loud-hailers in rubbish bins to amplify revolutionary songs in public spaces. "It was a great time," she recalls.

Until her arrest. While the other women in her cell were tortured with blows and electric shocks, Abir was subjected to psychological torture. "They put me out in the corridor naked in front of the soldiers and threatened to test my virginity, because they said I was a whore of the Free Syrian Army," says the activist. The humiliations and insults were such a violation that she sometimes wished she could have been beaten with a stick rather than attacked with words, she adds.

Abir is currently relating what she experienced over the course of 33 days and 11 interrogations to Germany's Public Prosecutor General. She is one of nine Syrian witnesses to file criminal charges in Germany against leading members of the military intelligence service.

A case for the German judicial system?

Victims and suspected perpetrators are Syrians, the crimes occurred in Syria – but the case could nevertheless be heard at a German court. This is because Germany recognises what's known as universal jurisdiction, whereupon the magnitude of some crimes is deemed to be so great as to be of concern to the entire world. These include war crimes, genocide and crimes against humanity.

If these are not being pursued through the courts either in the country where they occurred or internationally, national courts can intervene. This is exactly what is happening in the case of Syria. Because Russia is using its UN Security Council veto to block the path to the International Criminal Court in The Hague, savvy lawyers are now bringing these cases in European courts. 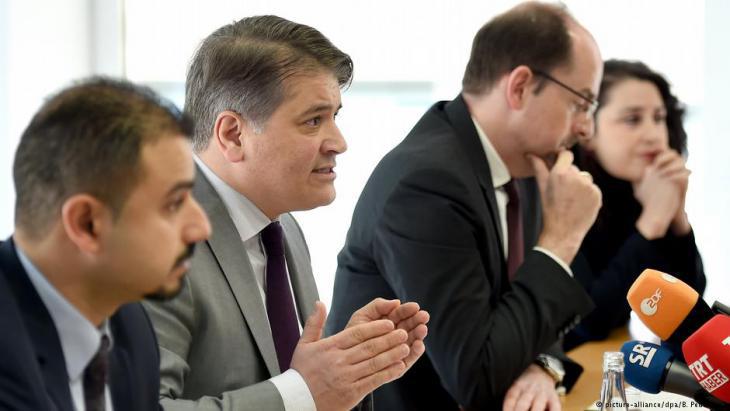 Lawyers against Assad: six German lawyers brought criminal charges last November against Syrian dictator Bashar al-Assad, accusing him of crimes against humanity and war crimes relating to the siege of Aleppo. They listed 41 "ruthless and excessive attacks against the civilian population", including the bombing of an aid convoy on 19 September, which sparked international condemnation. The six lawyers regard the Public Prosecutor General as the official responsible for the case, particularly since he is required to prosecute according to the international criminal code

This represents a breakthrough for Syrian lawyer Anwar al-Bunni. A policy of impunity has been in place in Syria for 50 years, he says and these charges are finally putting an end to this situation.  Al-Bunni hopes to be able to obtain arrest warrants for the perpetrators – to force notorious secret service chiefs such as Ali Mamluk, head of the National Security Bureau, into hiding forever.

The Syrian lawyer is working in close co-operation with the European Centre for Constitutional and Human Rights (ECCHR), which filed the charge with the federal prosecutor in early March. The prosecutor is now hearing evidence from the first witnesses – a positive signal after just two months, says ECCHR lawyer Patrick Kroker. Karlsruhe has been conducting a structural judicial enquiry into the situation in Syria since 2011 and now specific investigations against the accused and international arrest warrants should follow, demands Kroker.

In Spain, cases have already been brought against nine members of the military intelligence service for the crime of state terrorism. The case rests on photos by the military photographer "Caesar", who photographed 6,786 dead prisoners for the Syrian regime and smuggled these images out of the country. Emaciated, mutilated bodies. British lawyer Toby Cadman, who interviewed "Caesar", says he has never seen anything so terrible. "The industrialised torture of children, women and the elderly – these weren't terrorists, just normal people," says Cadman.

People like the 43-year-old truck driver Abdul, who died in a Damascus detention centre in 2013. His sister, who lives in Spain, recognised him in the photos and filed the charge. As she is a Spanish citizen and in Spain the relatives of disappeared persons are themselves regarded as victims, a Spanish court can get involved. "We're not arguing that a man was indiscriminately arrested, abducted, tortured and executed, but we're instead talking about a state policy agreed by the heads of the Syrian government," explains Cadman, who is looking after the case.

This system is the main difference between the crimes of the Assad regime and the atrocities of other conflict parties in Syria. Rebels also torture detainees, IS also kills arbitrarily and civilians die in US air strikes. But Assad's violence is institutionalised, an entire apparatus is focused on the destruction of civilians.

James Rodehaver, co-ordinator of the UN Commission of Inquiry on Syria, speaks of an "institutional structure with clear practices of serious abuse, the refusal of humanitarian aid and inhumane conditions of detention, all of which fulfil the offence of mass extermination." Rodehaver says this means the crimes of the regime are among the worst committed against humanity.

There is sufficient evidence, also in written form. The Commission for International Justice and Accountability (CIJA) has secured around one million Syrian documents that provide proof of chains of command and responsibilities. The "Caesar" photos also lead directly to members of the regime. Numbers have been written on the corpses of detainees. The former head prosecutor at the International Criminal Court for Rwanda Stephen Rapp finds this "unbelievable". "We didn't have any evidence in document form like we do in Syria," says Rapp.

They didn't even have it in Nuremberg, he adds. "The Nazis didn't daub numbers on the corpses so that it could be determined who they are and where this had been done to them. In order to then find out who was responsible for that particular place," the public prosecutor explains. "This regime thinks it will nevertheless get away with it."

But this is exactly what must not be allowed to happen, says Rapp. Because otherwise, the system of international laws and safeguards, built up over decades, will lie in tatters. "There are rules, for example that you can't attack hospitals," the lawyer says. "In Syria they aim at medical facilities." If such crimes go unpunished, other rulers elsewhere might be encouraged to do the same. "Injustice in one place threatens justice everywhere," warns Rapp.

The trauma of torture

Justice is a goal of the Syrian revolution, says Khaled Rawas, another ECCHR witness. The engineering student organised protests and was detained twice. He also ended up in department 215, one year before Abir – then his fellow activist, now his wife.

Khaled suffered maltreatment, but the worst thing for the 28-year-old was having to witness the torture of two inmates. "They beat them with a chain with a hook on it, so that scraps of flesh were ripped from their bodies," he recalls. The screams and the images will stay with him forever.

Many of their old friends are dead, disappeared or in jail, says Abir. Those who could fled to safety and left Syria. There are few opportunities for civil activism within the country itself, she says.

This is because the activists were caught between the state terror of Assad and the non-state terror of the jihadists and wiped out. For Khaled, filing the case in Germany is part of a healing process that gives rise to hopes of justice. For Abir, it is the continuation of the revolution with legal means. "We still exist, the peaceful civil movement," she insists. And this movement continues to demand freedom and the rule of law for Syria.

Home
Print
Newsletter
More on this topic
Charges against Bashar al-Assad: His turn will comeInterview with the journalist and author Garance le Caisne: Caesar and the butcher of DamascusSyria: human rights violations and torture: The toll of the missing
Related Topics
Arabellion, Assad regime, Human rights, Justice, Rule of law, Syrian Civil War
All Topics

Despite what heads of state may claim, the Russian attack on Ukraine is not a wake-up call for a self-confident Europe that defends its values. The war is accelerating the decline ... END_OF_DOCUMENT_TOKEN_TO_BE_REPLACED

At the EU's outer borders, the right of migrants to a fair asylum procedure continues to be systematically disregarded. Take Greece, for example: in the worst case scenario, those ... END_OF_DOCUMENT_TOKEN_TO_BE_REPLACED

Madrid's about-face on the Western Sahara conflict has enraged Algeria. Trade relations have been frozen unilaterally and a cut in gas supplies to Europe could be in the pipeline ... END_OF_DOCUMENT_TOKEN_TO_BE_REPLACED

Mourad al-Marouai was just nine when a landmine killed him on a beach in war-torn Yemen, a tragedy that will haunt his family forever. After a swim, the little boy "suddenly ... END_OF_DOCUMENT_TOKEN_TO_BE_REPLACED

A ceasefire has been in effect in Libya for the past year and a half. Yet after Russia's attack on Ukraine, another proxy war looms in Africa's most oil-rich country. Mirco ... END_OF_DOCUMENT_TOKEN_TO_BE_REPLACED

The Ukraine war has seen energy prices spike with oil producers in the Middle East making more money than ever. But will it put the brakes on long-planned reforms to diversify oil ... END_OF_DOCUMENT_TOKEN_TO_BE_REPLACED
Author:
Kristin Helberg
Date:
Mail:
Send via mail

END_OF_DOCUMENT_TOKEN_TO_BE_REPLACED
Social media
and networks
Subscribe to our
newsletter