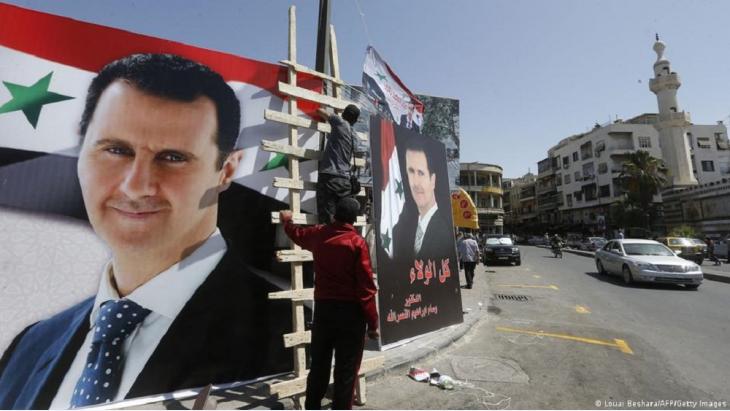 Assad's rehabilitation
At the expense of the Syrian people

A number of Arab League member states have announced in recent weeks that they intend resuming relations with the Syrian regime. A potential invitation to the Arab League summit in Algeria in March was even on the table, but the conference has since been postponed. By Bente Scheller

The circumstances that caused Syria's membership in the Arab League to be suspended in 2011 have not changed. At that time, the regime was urged to release all prisoners, withdraw its tanks from the cities and launch negotiations with the opposition. Assad agreed to these requirements, but did not even pretend to go about meeting them.

In the intervening years, hundreds of thousands of people have been killed in Syrian and Russian air raids and over half of the country's population has been displaced. Tens of thousands of additional citizens have "vanished" over the years, many of them presumed killed, in most cases by the Syrian regime. The massive human rights violations have led to a series of for the most part targeted sanctions by EU member states. Two years ago, the USA expanded its range of instruments through the Caesar Act (Caesar Syria Civilian Protection), which also imposes indirect sanctions on third countries if they maintain relations with the regime or support reconstruction in Syria.

Instead of punishing the regime's transgressions, however, some Arab League member states reason that normalisation will serve to create "step by step" incentives for the regime to change its ways. While this may well work in other contexts, the assumption runs counter to everything that past experience in Syria has taught us.

The regime profits the most from trade

First of all, it is not as though the regime has been running on empty for the last few years. Despite targeted European sanctions against the highest-ranking government representatives in Damascus, they have always found ways to enrich themselves. Syrian passports are among the most expensive in the world. And thanks to predetermined exchange rates, more than half of every dollar in humanitarian aid goes straight into the pockets of the Assad clan. Relatives of those who have been arrested or disappeared are extorted at all levels of the judicial and security apparatus. Many of them have paid exorbitant sums to learn about the fate of their loved ones.

But even in this cynical business, the regime has never felt obligated to provide any real quid pro quo. Most of those affected have been fobbed off with lies and contradictory information. And hardly any prisoners have been released; instead, prison conditions are becoming increasingly desolate. 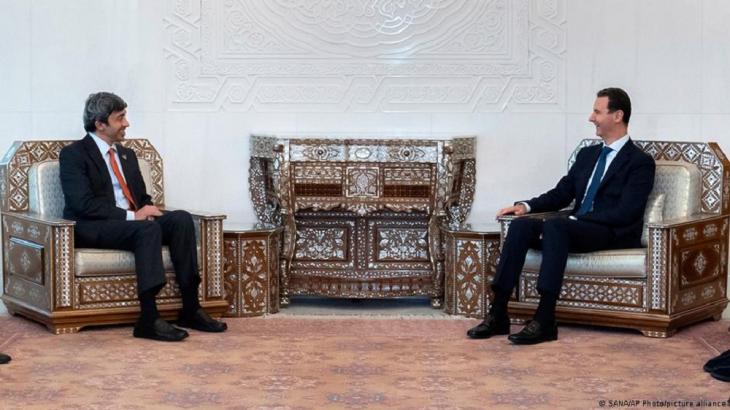 New friends from the Gulf: on 9 November 2021, Emirati Foreign Minister Sheikh Abdullah bin Zayed al-Nahyan visited Damascus. It was the highest-ranking visit from the United Arab Emirates since the outbreak of the Syrian civil war in 2011. The Emirates had already re-opened its embassy in the Syrian capital in 2018. Yet the circumstances that caused Syria's membership in the Arab League to be suspended in 2011 have not changed. At that time, the regime was urged to release all prisoners, withdraw its tanks from the cities and launch negotiations with the opposition. Assad agreed to these requirements, but did not even pretend to go about meeting them, as Bente Scheller writes

The regime has shown interest only in its own political survival – under conditions that should be as comfortable as possible. The plight of the general population appears on the other hand to be a matter of no concern, with any improvement even deemed undesirable. The more difficult it is for people to go about their daily lives, the more dependent they are on reconciling themselves to the present regime and the less freedom they have for political engagement. The economy and commerce are controlled by a tiny elite close to the regime – the same people who stand to benefit from normalisation.

No stability under Assad

The idea of incentives is not new. The humanitarian aid organisations have made repeated attempts to apply the "more for more" formula, but with little success. While the regime laid siege to millions of its own people between 2012 and 2018, it could not be swayed even by offers of more aid in territories under its control to grant better supplies for opposition regions.

The Chatham House think tank estimates that a resumption of Syria's trade relations with Arab states would bring $2.41 billion into the country over the next four years, $2.17 billion of which would go to pro-regime forces. And British experts predict that, even of the remaining $240 million, a quarter would remain in government coffers in the form of taxes, fees and bribes, while living conditions for the general population would continue to deteriorate.

Stability is in fact the key requirement if the standard of living is to improve – but that is exactly what the regime wants to avoid, seeing as it thrives on sowing fear and insecurity. In the meantime, it is questionable whether the present regime would even be able to create a sense of security again, because many army units and militias have long since gone rogue and divided up spheres of influence and business sectors amongst themselves. And without security, no outside investments will be forthcoming that might revive the labour market. Not to mention that those governments that now desire "normalisation" are certainly not acting out of altruistic motives. The social realities in Syria were not an issue in any of the pronouncements made by the United Arab Emirates or Bahrain on the steps to be taken toward normalisation.

This kind of "step by step" normalisation would in fact only fuel social tensions in Syria further, serving as even more of an incentive for the regime to continue its repressive policies in order to benefit from the large profit margins in trade. According to UN Secretary-General Antonio Guterres, 90 percent of the Syrian population was already living below the poverty line by March 2021.

The states in the region should know better than to hope that their offers will change anything. The last time they launched advances for normalisation, before the Arab League summit in Tunis in 2017, Assad showed neither remorse nor gratitude for their cautiously extended hand. He was still waiting for an apology from the organisation, diplomats from the region said at the time.

A threat to neighbouring states

The Syrian regime's policies were the only reason why the so-called Islamic State could become so strong, and Assad simply let it have its way. For neighbouring states, this was and is still a menacing, destabilising situation, even after the formal end of the caliphate in 2019.

Before the war, Syria was known as a producer of generic drugs, and now it is synthetic drugs that are being smuggled out of Syria. But Assad's policies also pose less obvious risks to the region. Polio, officially eradicated in Syria in 1999, reappeared more frequently there after 2011 and spread to neighbouring states – because Assad refused to fight the disease, supported by the World Health Organization (WHO), which has always shown itself to be pro-regime.

With targeted bombing, the Syrian and Russian air forces have destroyed around 40 percent of Syria's hospitals, and others have sustained serious damage. Only one-third of the physicians and nurses in the country before the war are still there. The intelligence services have set up separate departments to deal with employees in the health-care sector and have criminalised the provision of care to those deemed disloyal to the regime. This policy, designed to target the most vulnerable, violates all international norms and ethical standards. And it obviously also prevents the coronavirus pandemic from being contained, which in turn affects neighbouring countries.

Whatever the expectations harboured by advocates of normalisation in the United Arab Emirates and Bahrain, they will not be met, even if Assad were to make commitments as he did in 2013, which is unlikely. At that time, the Syrian regime narrowly escaped US intervention after using chemical weapons to kill about 1,000 people. It joined the international chemical weapons convention and declared its arsenal destroyed in 2014. But even today, eight years later, it has still not answered 20 of the 24 questions that were still open at the time. Experts at the Organisation for the Prohibition of Chemical Weapons (OPCW) believe that Syria's sarin stockpile was never completely destroyed. If anything, attacks with chlorine gas increased. When Assad absolutely has to, he delivers, but only half-heartedly and incompletely.

A key goal of the countries surrounding Syria as well as some of the European states hosting refugees is that those who have fled should be able to return to Syria. But this will never happen under Assad's regime. There is no lack of lip service from Damascus about "welcoming" them back. However, even the Lebanese government, which maintains good relations with Damascus, confirms in its statistics that Syria's security apparatus has accepted only 20 percent of those willing to return from Lebanon. The recurring fighting in Daraa on the border with Jordan and the ongoing threat to Idlib in north-western Syria are likely to lead to even more Syrians trying to leave the country rather than to anyone returning in the long term.

Frustration in the neighbouring states that have taken in many Syrian refugees could result in violence against refugees or even forceful attempts at repatriation. Outside the region as well, anti-asylum governments like Denmark's will surely also cite a desire for normalisation as evidence that the situation in Syria has improved. But with this form of normalisation, the Syrian population only stands to lose.

Bente Scheller took over as head of the Middle East and North Africa Division at the Heinrich Boll Foundation in Berlin in September 2019 after heading the Foundation's office in Beirut from 2012 to 2019. Previously, she was the head of the Afghanistan office. Her book "The Wisdom of Syria's Waiting Game: Foreign Policy Under the Assads" was published in February 2013.

Anger in the Middle East is spreading over comments made by an official of India's ruling BJP about the Prophet Muhammad, with various countries summoning New Delhi's envoy and a ... END_OF_DOCUMENT_TOKEN_TO_BE_REPLACED

Women's empowerment in the Gulf has become a tool of deflection, rather than a genuine effort to promote women’s full and equal participation in society. By Mira Al-Hussain END_OF_DOCUMENT_TOKEN_TO_BE_REPLACED

A straightforward message emerged from last week’s meeting in the Negev desert of the foreign ministers of four Arab countries, Israel and the United States: Israel is key to the ... END_OF_DOCUMENT_TOKEN_TO_BE_REPLACED

Hamburg lawyer Eugen Balin is a member of the World Jewish Congress' Jewish Diplomatic Corps. At the end of 2021, a delegation of the Corps visited the United Arab Emirates, which ... END_OF_DOCUMENT_TOKEN_TO_BE_REPLACED

The catastrophic human rights situation in Bahrain is being largely ignored by the rest of the world. Despite all the damning evidence, which includes a Human Rights Watch report ... END_OF_DOCUMENT_TOKEN_TO_BE_REPLACED

Germany's foreign policy is explicitly values-based. But what happens, Ralf Bosen asks, when democracy, the rule of law and human rights collide with the logic of trade and ... END_OF_DOCUMENT_TOKEN_TO_BE_REPLACED
Author:
Bente Scheller
Date:
Mail:
Send via mail

END_OF_DOCUMENT_TOKEN_TO_BE_REPLACED
Social media
and networks
Subscribe to our
newsletter