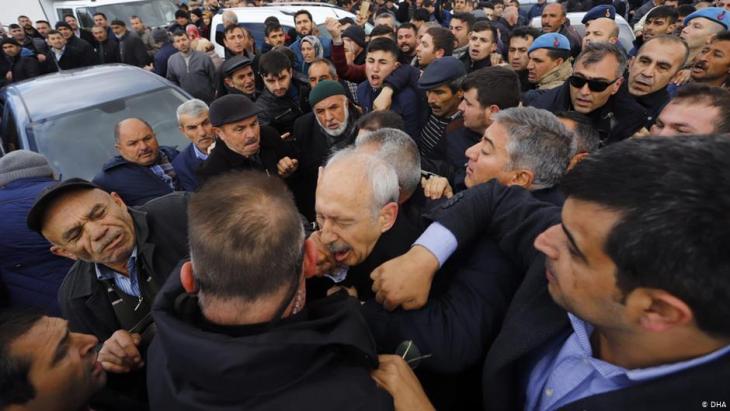 Return of the lynch mob in Turkey?

Turkish opposition party leader Kemal Kilicdaroglu was attacked by an angry mob in public and nearly killed – the latest in a spate of such violence. What does the incident say about the political culture in the country? By Burcu Karakas

The leader of the Republican People's Party (CHP), Kemal Kilicdaroglu, had most likely prepared himself for a more contemplative day on 21 April, when he attended the funeral of a soldier killed during a battle with Kurdish militias.

But the atmosphere among those in attendance at the memorial being held in Cubuk, about 40 kilometres north of Ankara, turned out to be tense and when Kilicdaroglu arrived, the situation escalated quickly. An angry mob surrounded the 70-year-old, hurling punches at him from all directions; the opposition leader took a few blows to the face.

"Burn the house down"

Grimacing in pain, he struggled to stay on his feet amidst the violent uproar. Kilicdaroglu's bodyguards surrounded him so as to shield him from the many attackers. Finally, they managed to escape into a house.

But it didn't stop there: Kilicdaroglu had to wait inside while the house was besieged, with some of the men shouting: "Burn the house down!"

The attack sparked outrage on social media. On Twitter, hundreds of thousands of users expressed solidarity with the opposition leader by posting with the hashtag #KilicdarogluYalnizDegldir ("Kilicdaroglu is not alone").

A tweet from Eren Aysan, the daughter of famous Turkish poet Behcet Aysan, went viral: "My father was killed in the massacre in Sivas. In the last 26 years, I see that nothing has changed. Again, the call is ʹset the house on fireʹ."

Kilicdaroglu not an isolated case

The tweet hit a nerve. The words reminded many in Turkey that the mob attack at the funeral was not an isolated incident. Aysan's post bore particular weight because she is the daughter of famous Turkish poet Behcet Aysan.

The latter was killed in an instance of mob violence in the central city of Sivas in 1993. During an Alevi cultural festival, a mob of religious fanatics set fire to a hotel where most of the guests were Alevi. Thirty-seven people lost their lives in the arson attack.

Another case of mob rule that evokes painful memories among the older Turkish generation occurred in 1977. In the Turkish province of Kahramanmaras, right-wing extremists close to the ultranationalist Nationalist Movement Party (MHP) massacred more than 100 Alevis, some of the killings took place in the open on the street. Many similar cases of mob attacks – especially against the Alevi minority – have taken place in Turkey since the 1960s.

Turkey's parliamentary and presidential elections are scheduled for June 2023. But they are already casting a shadow. While the opposition is calling for early elections, ... END_OF_DOCUMENT_TOKEN_TO_BE_REPLACED

By stage-managing his re-election in a poll widely dismissed as a farce, Syria's President Bashar al-Assad has killed two birds with one stone: he has forced his compatriots to ... END_OF_DOCUMENT_TOKEN_TO_BE_REPLACED

Recep Tayyip Erdogan, disappointed by the European Union’s reluctance to integrate Turkey into its ranks, has re-directed his country’s diplomacy toward the Maghreb and Africa to ... END_OF_DOCUMENT_TOKEN_TO_BE_REPLACED

Having taken control of the traditional media, Turkish President Erdogan is now extending his reach to the social networks. A new law has been passed to rein in major digital ... END_OF_DOCUMENT_TOKEN_TO_BE_REPLACED

Although a unity government was formed in Libya in March 2021, tensions and possible crises between the political actors are already emerging. What problems does the country face ... END_OF_DOCUMENT_TOKEN_TO_BE_REPLACED

END_OF_DOCUMENT_TOKEN_TO_BE_REPLACED
Social media
and networks
Subscribe to our
newsletter