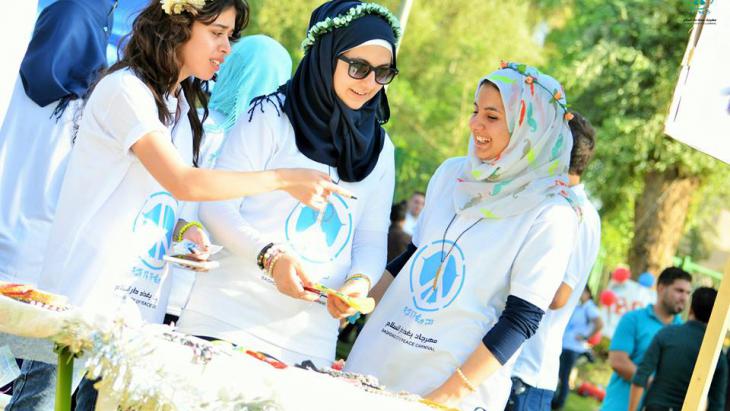 An annual event shows what the Iraqi people want most of all: peace. Young people in Baghdad organise a major street carnival to set positive images against the daily news of violence and war. The event has also given rise to regular participation in civil society. By Eva-Maria Verfurth and Qayssar Alwardii

Iraq is a divided country haunted by violence. A political solution seems a long way off. On UN World Peace Day, 21 September, Baghdad will host the City of Peace Carnival – a major event. According to its organisers, it attracted around 15,000 in 2015 and 23,000 people last year. In 2016, 500 volunteers contributed to make it happen.

The spectators span all generations and ethnic groups. Broadcasted live on TV and radio, the event features music and dance performances, play areas for children, art and craft stalls and discussion groups. Everything is put together by hundreds of young organisers in months of hard work. Qayssar Alwardii is one of them. He says: ″The Peace Carnival is a symbol of hope, especially for young people.″

The event was launched on a small stage in Al-Zora Park in 2011. Young bands played traditional Iraqi music and young artisans sold arts and crafts at small stalls. The three-hour event was organised by 30 volunteers and attended by around 300 visitors.

A life marked by fundamental rights

″Many people say it’s crazy to celebrate peace in the current situation. They ask: ‘What peace?’″ But Alwardii and his fellow campaigners will not be discouraged. They see peace as more than the absence of armed violence. Peace, to them, is a life marked by fundamental rights, including the freedom of expression and movement and with peaceful interaction in society. The carnival is supposed to promote this notion: ″Our dream is to make the city of Baghdad a better place and help to create a better society for future generations.″

The event itself is not the only thing that matters. The young people are aware of the months of preparation uniting them for a common goal. They want to build a better society and promote a more peaceful way of life. Their engagement starts on a small scale – getting volunteers to cooperate – and ranges up to active participation in social affairs.

″The volunteer meetings strengthen social cohesion, which is very important for our society,″ Alwardii explains. ″There is a lot of resentment between people of different cultural, ethnic and linguistic backgrounds in Iraq. We teach young people to respect one another.″

In the youngsters’ lives there are only few settings in which girls and boys come together on equal terms. The volunteer meetings are one such setting. The media team – which was led by Alwardii last year, was made up of an equal number of girls and boys. The volunteers need to work hard to secure parents’ permission. ″Parents often come along to the first meetings because they are worried,″ Alwardii reports. ″We talk to them on those occasions. Fortunately we manage to persuade most of them to let their children get involved.″

The organisers, moreover, want to establish a new culture of responsibility. ″In Iraq, people like to stay in the same job – whether they are in business or politics,″ Alwardii says. At the peace carnival, things are different and participants must assume new responsibilities. A new organising team is put together each year and anyone who worked in the co-ordinating team the year before can only take part in an advisory capacity. ″The idea is to show young people the benefits of reassigning roles. After a few years, you have a whole new generation of carnival organisers.″ 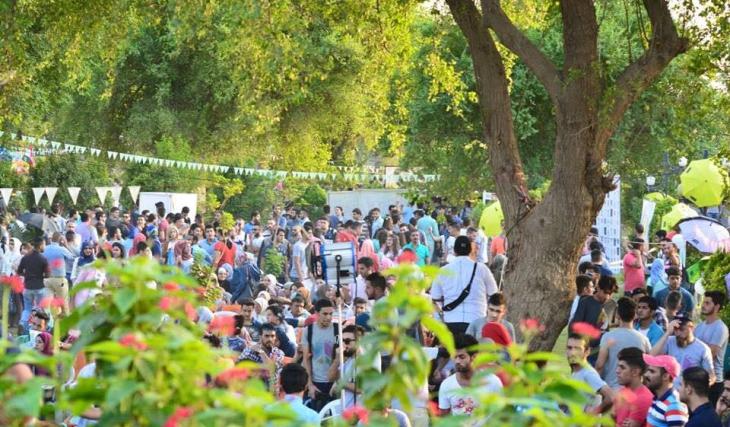 From small beginnings: what started in 2011 with a handful of volunteers has grown into a major event. The Baghdad City of Peace Carnival, held every year on World Peace Day, has become a focus for Iraqis seeking a new, peaceful future for their country, strengthening social cohesion and fostering mutual respect

A strong voice in civil society

The carnival has also given rise to a number of youth groups, which are active throughout the year. They include small associations, bands and breakdance collectives but also social action groups. For example, one group was formed by medical students who demand improvements of public health care.

The carnival volunteers have gained a strong voice in civil society. They use their event to raise awareness of society issues. The Baghdad carnival has a different motto each year. In 2014, when growing numbers of refugees fled IS and came to the city from the civil-war zones and neighbouring provinces, the motto was: ″Peace begins with rights for the internally displaced people (IDPs).″ Alwardii recalls: ″We wanted to help displaced people because they receive no care and attention.″ During the carnival preparations, the organisers looked for sponsors and raised money for IDPs.

In 2015, they continued in the same vein, promoting peaceful coexistence with the slogan ″Peace begins with our diversity.″ The point was to convince people that diversity is the solution, not the problem. ″We have lived in a mixed society for decades,″ says Alwardii, ″the real problem is how to accommodate so many more people in one single city.″

In 2016, the motto was: ″Youths are future leaders.″ The point was to emphasise the view of young people in regard to creating opportunities and fostering development. Alwardii says that the young generation must have an ″unstoppable, unique power″.Today, the City of Peace Carnival can even rely on government backing. In 2014, the youngsters received an official offer of support from the ministry for youth and sport. Iraq, it seems, has moved on since the days when politicians took a sceptical view of any kind of youth movement. Alwardii reports: ″They were afraid because youth protests triggered the Arab spring in countries like Egypt and Tunisia. But we showed them that we do not want to protest – we simply take matters into our own hands.″

For a number of years, the City of Peace Carnival has only been funded by small non-governmental organisations. The event now has private sponsors, including a major telecommunications company and famous restaurants, but it still is organised exclusively by volunteers. For many of them, the commitment has paid career dividends. The band Project 904 performed at the first carnival and now has a regular slot on daily social media news. It is known nationwide. Other volunteers have found jobs with international organisations or major telecommunications companies. Their experience impressed recruiters.

″Being a City of Peace Carnival volunteer has become a recommendation for employers,″ Alwardii reports. He himself works as a professional for the International Organisation for Migration (IOM), a UN agency. At the age of at 25 years, he is by far the youngest member of his team. ″My colleagues appreciate my experience." He also volunteers for the UN Development Programme. ″To work for the UN, you need a good CV and good contacts. I acquired all that over the last four years at the City of Peace Carnival. ″

Historically Iraq's Yazidi community was isolated, under-resourced and very conservative. Seven years after the "Islamic State" tragedy, the community is more open to the world – ... END_OF_DOCUMENT_TOKEN_TO_BE_REPLACED

Asef Bayat, professor of Sociology at the University of Illinois, Urbana-Champaign, has been studying revolutions and how they affect people since 1979. In his recent book, " ... END_OF_DOCUMENT_TOKEN_TO_BE_REPLACED

Young people in northern Iraq are so disillusioned that many are trying to leave the country any way they can. Some fear widespread discontent could push people toward potentially ... END_OF_DOCUMENT_TOKEN_TO_BE_REPLACED

In this new bilingual edition, translated by Humphrey Davies, al-Jawbari, one of the thirteenth century's leading experts in skullduggery reveals all there is to know about the ... END_OF_DOCUMENT_TOKEN_TO_BE_REPLACED

In Iraq, returning families of IS fighters have to turn to local initiatives for help, as there is no official path home. Judit Neurink met with families on the ground END_OF_DOCUMENT_TOKEN_TO_BE_REPLACED
Author:
Eva-Maria Verfurth and Qayssar Alwardii
Date:
Mail:
Send via mail

END_OF_DOCUMENT_TOKEN_TO_BE_REPLACED
Social media
and networks
Subscribe to our
newsletter