At the Berlin Film Festival, Bahman Ghobadi's "Turtles Can Fly" confronts viewers with the current situation in the Kurdish region of Iraq. Ariana Mirza reports on Ghobadi's latest project and the special intensity of Kurdish films. 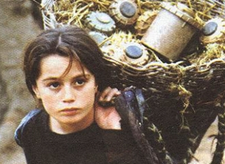 ​​Ever since the international success of his film "A Time for Drunken Horses", Bahman Ghobadi has been regarded as the most important representative of contemporary Kurdish cinema. His most recent work, "Turtles Can Fly", won the Best Film prize at the San Sebastian Film Festival, Spain, and was considered an inside tip at this year's Berlin International Film Festival.

The poignant story of orphans who earn a living digging up land mines is the first feature film to be shot in Iraq after the fall of Saddam Hussein.

In his hit film "A Time for Drunken Horses", Ghobadi also thematized the living conditions of children and adolescents in the border region between Iran and Iraq. At this year's Berlin Film Festival the 35-year-old director once again showed searing images of a lost childhood.

Deep wounds from war and persecution

"In Kurdistan you have to be grown up from the moment you're born," Ghobadi says. The life shown in the film is harsh and filled with deprivation, with deep wounds left by war and persecution. Neither the children's bodies nor their souls have survived unscathed. No love is great enough to heal these wounds.

At the Berlin Film Festival some of the many Kurdish viewers criticized "Turtles Can Fly" for offering too little hope and optimism. "There is also a new, better Kurdistan, progress and well-educated people." However, Ghobadi is little inclined to take this optimistic perspective, as are most contemporary Kurdish filmmakers.

Kurdish film productions share a common theme: the focus on ordinary people who are unable to influence their fates. Whether in exile, in Turkey, Iran or, most recently, in Iraq, Kurdish directors find their themes by confronting the oppressive day-to-day life of their countrymen. In Syria, the fourth country with a Kurdish population, there are virtually no film productions whatsoever, much less a Kurdish film scene. Kurdish directors from Syria work in North America and Europe.

Kurdistan – both mystical and inhospitable

Bahman Ghobadi worked with amateur actors who were "acting out of their own life", as Ghobadi says

​​For some years now works by these filmmakers have been greeted with great interest by film critics and at international festivals. This is due mainly to the aesthetic features of Kurdish film. While it has a highly realistic, descriptive side, it does not shy away from presenting a magical meta-level. Alongside the protagonists, other, hidden forces play a role. In front of the camera the landscape of Kurdistan, both mystical and inhospitable, develops a bizarre life of its own.

The elements of air, earth, fire and water are felt in their full force. The sight of an old man's face or a little girl's eyes tells a whole life story. This interplay between a moving story and breathtaking images is especially typical of Bahman Ghobadi's films. Wondrous things occur in Kurdistan's harsh landscape – and this sense of wonder is reflected in the way the film is made.

The second aspect which many Kurdish productions have in common is something which Bahman Ghobadi explains as a necessity: "I show so many oppressive things that I have to make it bearable with a lot of humor." In contrast to the European auteur tradition of highbrow socially critical films, Kurdish films do not shy away from moments of comedy. While the protagonists are always viewed affectionately, their odd character traits often provoke humor.

Tragedy and comedy interweave as if it were the most natural thing in the world, and the amateur actors in "Turtles Can Fly" perform just as naturally and convincingly. "Ultimately, they are acting out their own life. I didn't have a set screenplay. The children's own experiences shaped the film." The truthfulness of the story can be felt in every minute of the film. And it is easy to believe it when the director explains: "The children would have suffered from culture shock if they had been able to come with me to the Berlin Film Festival. Their world is the one shown in the film."

Bahman Ghobadi filmed "Turtles Can Fly" on location in Iraq, where the new Kurdish administration actively supported the project. Having financed the film with loans and private funds, the director was very pleased with this cooperation. "They understood that it's important to use film to reach people around the world." The Kurdish film distributor Mitosfilm and the humanitarian organization medico international are working to ensure that the film will be shown in many theaters throughout Germany. For years the German NGO medico international has aided mine victims in Kurdistan and Afghanistan.

Yet the Kurdish people whose suffering is the focus of the story will have no opportunity to see the film, either in Iraq or in neighboring Iran. "In the entire region there are only 10 movie theaters for 40 million people," explains Bahman Ghobadi. And he adds that he has managed only once to show the film to a native Kurdish audience: "The people embraced me and wept with emotion."