In Bangladesh around 4.5 million children are working under hazardous conditions. Some 1.7 million of them live and work in the capital, Dhaka. DW correspondent Mustafiz Mamun has captured their every day lives on film. 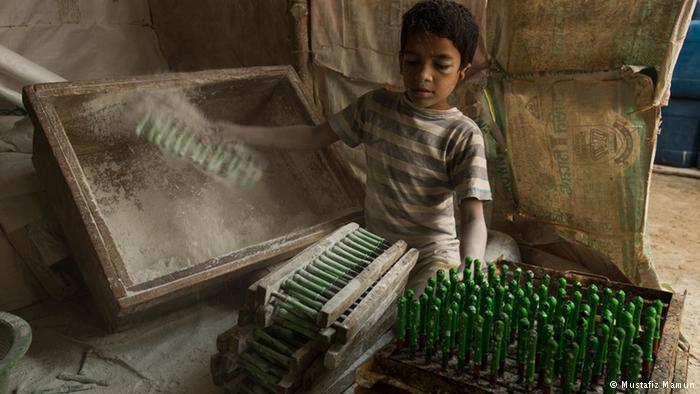 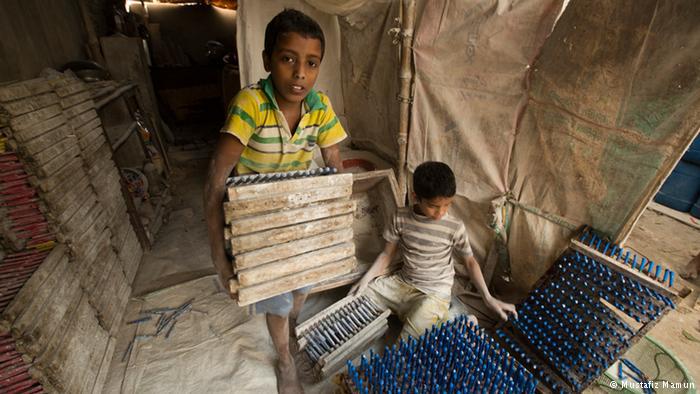 Lack of inspection: Children - like those here in this factory in Kamrangi Char - often have to work near dangerous chemicals. The Government of Bangladesh has issued a guideline, which bans children from working in 38 different dangerous jobs, but the guideline has not been implemented anywhere as yet 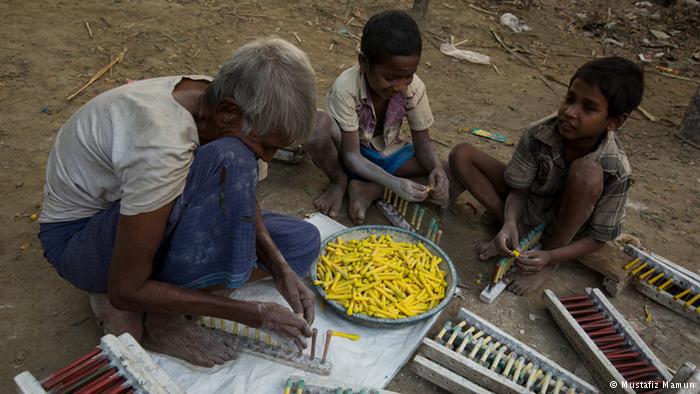 Most of the workers are children: Children are paid less than adults in Bangladesh and many of them work up to twelve hours a day. That is the reason why most of the workers in these factories are children. They are generally employed in rooms well inside the factory to hide them from sight. They do not get any holidays except for time off on a Friday afternoon. Friday is a day of worship in Bangladesh 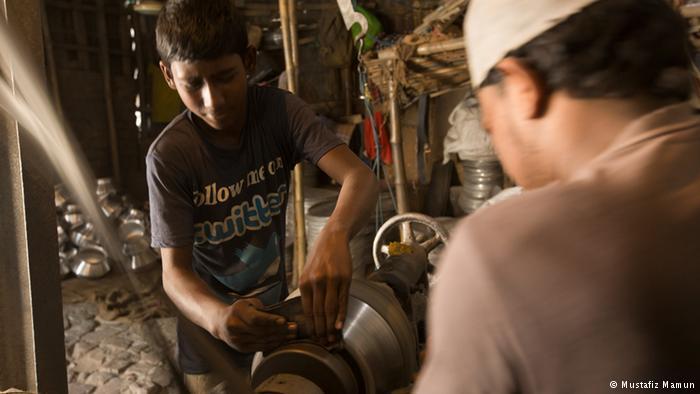 Hazardous working environment: This is Ali Hossain, a child labourer. He works in a silver factory in Keraniganj in Dhaka, almost day and night. The long hours and deafening noise are ruining his health and thus his future. Needless to say, full-time work also contributes to high school drop-out rates 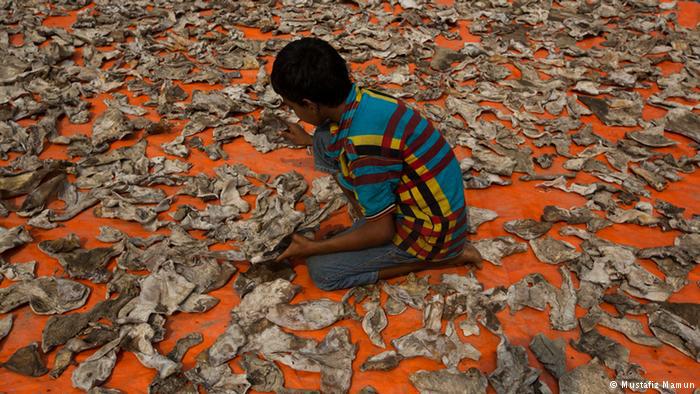 Children in the tannery factories: According to the 2006 Labour Law, the minimum legal working age in Bangladesh is 14. But here is 12 year old Asif from Noakhali, an admistrative district in Bangladesh. He works at least 12 hours a day drying chemically treated leather in a tannery factory in Dhaka’s Hazaribag. In this way he earns enough money to keep himself and his mother 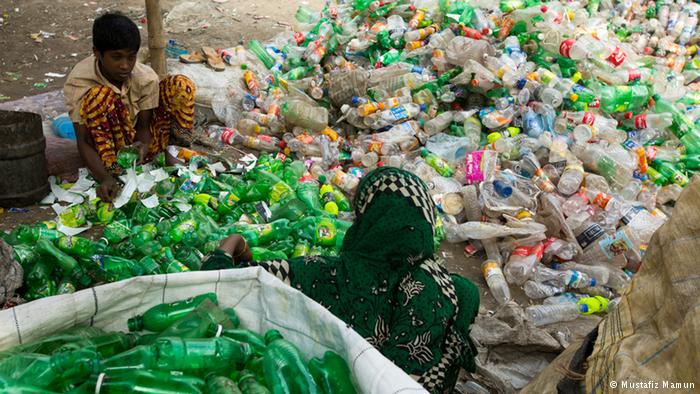 Rabbi with his mother: Rabbi is from Chandpur. He works with his mother in this plastic processing factory in Kamrangi Char which produces bottles. The owner of the factory is said to be against employing child labour. Rabbi only got the job, because his mother pleaded with the owner saying that she did not earn enough to support them 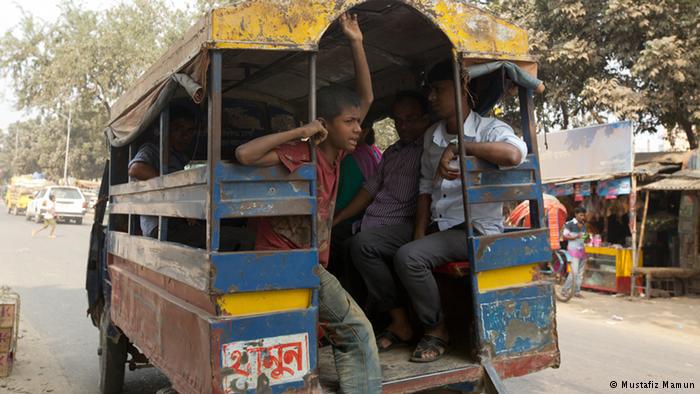 Child helpers in 'human hauler': Some 93 percent of child labourers work in the informal sector – in small factories, in home-based businesses and domestic employment and on the streets, like these human haulers on the streets of Dhaka. The kids help passengers onto vans and buses used for public transportation. And not surprisingly are often the victims of accidents 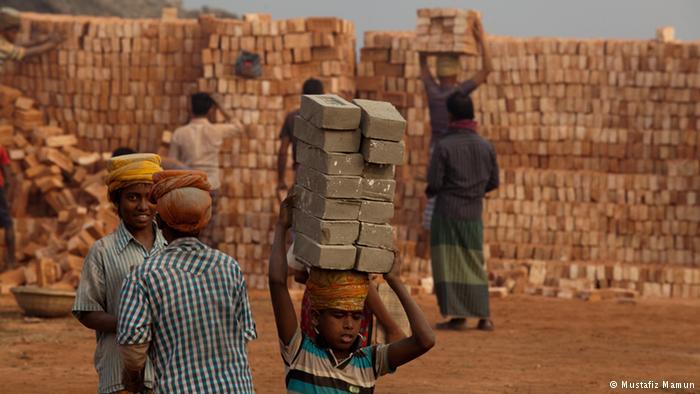 Children from the brick field: Brick-chipping is common in Bangladesh. Many children work as chippers in these brick fields in Amin Bazar in Dhaka. They are paid 100-120 taka for carrying a thousand bricks. These bricks are very heavy, around three kilograms. But each child has to carry six to 16 bricks at a time and take them to the brick depot 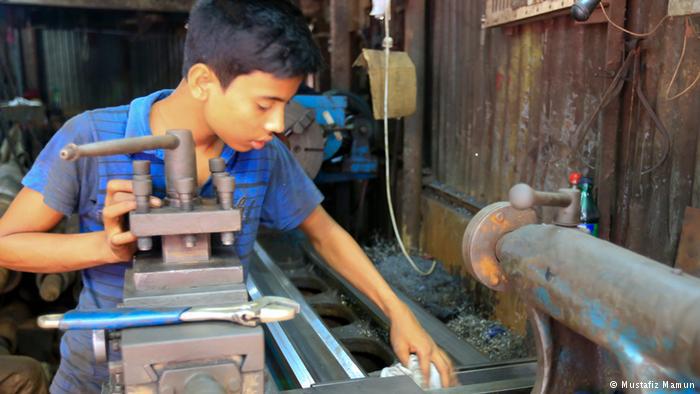 Physical and mental health in danger: This is Rahim. Long hours, low or no wages, poor food, isolation and hazardous working conditions, like in this lead factory, can severely affect the physical and mental health of children like Rahim. More so as child labourers are also vulnerable to other abuses such as racial discrimination, mistreatment and sexual abuse

END_OF_DOCUMENT_TOKEN_TO_BE_REPLACED
Social media
and networks
Subscribe to our
newsletter