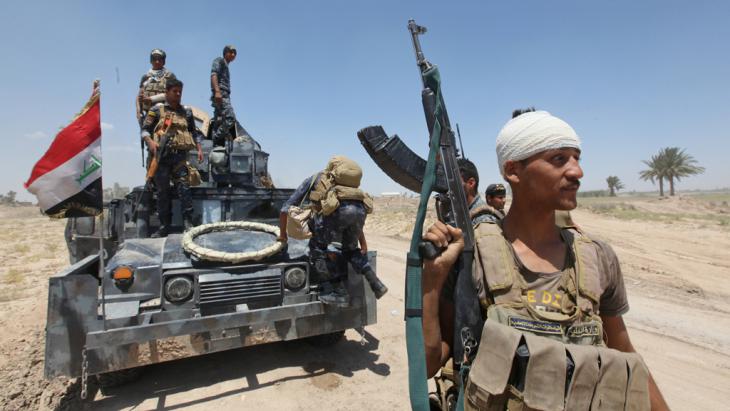 Battle for the IS stronghold of Fallujah

Militiamen on the rampage

The battle for the Iraqi city of Fallujah is in full swing. Shia militia are apparently giving the IS jihadists a run for their money. But what appears to be militarily effective is a political disaster. By Karim El-Gawhary

The fight to recapture Fallujah has been raging for more than two weeks now. The Iraqi army is pushing back "Islamic State" (IS) positions metre by metre. Thus far, however, it has been the pro-government Shia militia that have seen the most success. A few days ago, they captured the suburb of Saqlawiyah, seven kilometres northwest of Fallujah.

But now reports are surfacing that Shia militiamen are beating and torturing Sunni civilians detained during their advance. One of the mobile phone videos to emerge in recent days shows a Shia militiaman raining down blows on a group of men lying on the floor. "Say that you men from Fallujah are feeble womenfolk!" he demands. The men repeat his words. "Louder!" screams the militiaman and continues to beat the detainees.

Another video shows a group of men, some of them injured, at a military base to the east of Fallujah. More than 600 people are awaiting their fate there, a local Sunni politician Sheikh Raja al-Issawi tells journalists. Four are alleged to have succumbed to their injuries. "They just slaughtered us, they said we were IS fighters," says one of the men. Another reports: "We tried to explain to them that we were on their side, but they claimed we were from IS. They wanted revenge." Another man pushes his way forward: "The militias came to kill us, not to liberate us," he says. 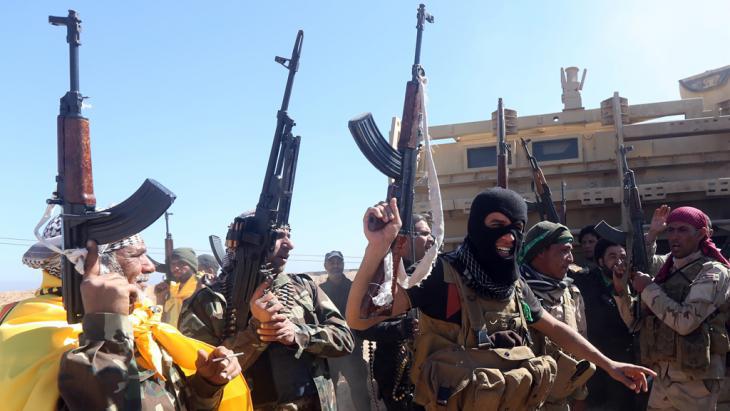 Criticism of the "Popular Mobilisation Forces": Shia forces loyal to the government are accused of attacking Sunni civilians. The organisation Human Rights Watch (HRW) recently claimed the existence of information detailing an incident in which members of the police and armed militias shot and killed at least 17 members of a Sunni clan to the north of Fallujah. Owing to concern over the possibility of attacks, warnings had been issued ahead of the offensive on Fallujah that Shia forces should not take part in the operation in the Sunni heartland of Iraq

Local Sunni politicians are now calling for an international enquiry into the incidents. Sunni activists claim 300 people were executed by militiamen in a school in Saqlawiyah. The claim cannot be verified. Shia militia leaders dispute the allegations. "We are not authorised to take anyone prisoner. We are only taking refugees out of Fallujah," says Haider Mayahii, a spokesman for the Shia-dominated "Popular Mobilisation Forces".

It is difficult to ascertain the truth. But one thing is certain: the videos are having a devastating effect. The Shia militia can take credit for the successful capture of areas under IS control, but these gains are costing the government in Baghdad dear. After all, the more the stories of rampaging Shia militiamen in the villages around Fallujah do the rounds, the easier it will be for IS to sell itself as protector of the Sunnis in Iraq.

The government faces a dilemma. The Shia militia are militarily much more powerful than the regular Iraqi army which, if it were acting alone, would barely be in a position to push back the IS and take Fallujah. The central government in Baghdad needs the Shia militia in the battle against the jihadists. But at the same time, the Shia militia that invade Sunni villages and towns represent a political disaster. Humanitarian organisations estimate that up to 50,000 civilians are still in Fallujah and its environs.

An agreement now appears to have been reached in which the Shia militia will no longer be directly involved in the capture of Fallujah. Ultimately, the government will probably achieve a military success in Fallujah, but have to accept a political defeat – assuming the involvement of Shia militia has alienated the Sunni population yet further from the Iraqi state.

Home
Print
Newsletter
More on this topic
Iraq′s political crisis: Al-Sadr the power brokerThe role of Qassem Soleimani in Iraq: Reining in the lionInterview with Wilfried Buchta on the rise of IS and the fall of Iraq: "Iraq is irreversibly split"
Related Topics
'Islamic State' | IS, Haider al-Abadi, Shia Islam | Shiite Muslims, Sunni-Shia tension
All Topics

Twenty years after 9/11, the world is faced with the dual challenge of Islamophobia and anti-Westernism. Ahmet Kuru argues that Muslims in the West, well versed in both Western ... END_OF_DOCUMENT_TOKEN_TO_BE_REPLACED

Two decades after the attacks of 11 September 2001, the West faces the shattered debris of its failure – not only in Afghanistan, but also in Iraq, Syria, Libya and Yemen. What ... END_OF_DOCUMENT_TOKEN_TO_BE_REPLACED

Twenty years after 9/11, the United States is recalibrating its war policy. However, its assertions that the era of endless wars is over are a myth, writes Maha Hilal END_OF_DOCUMENT_TOKEN_TO_BE_REPLACED

The coronavirus pandemic has turned lives upside down all over the world. In the Middle Ages, however, people lived with epidemics all the time. The best and most famous ... END_OF_DOCUMENT_TOKEN_TO_BE_REPLACED

While agreeing last week to a withdrawal of US combat troops from Iraq, neither Iraqi nor US leaders can admit publicly how much they need each other. By Cathrin Schaer END_OF_DOCUMENT_TOKEN_TO_BE_REPLACED

Reading Hassan Blasim's God 99 is an immersive experience of grief and exaltation, anger and disgust, writes Marcia Lynx Qualey. We join the Iraqi narrator as he sits around in ... END_OF_DOCUMENT_TOKEN_TO_BE_REPLACED
Author:
Karim El-Gawhary
Date:
Mail:
Send via mail

END_OF_DOCUMENT_TOKEN_TO_BE_REPLACED
Social media
and networks
Subscribe to our
newsletter