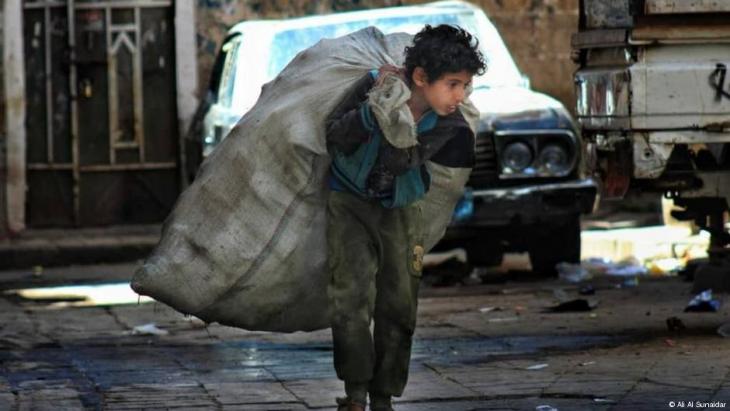 Bearing the brunt of the war
Yemeni families in dire straits

War, famine and poverty are devastating Yemen. Millions of people are in dire need of food and medical supplies. Among the worst-affected are young mothers and their children. Gouri Sharma and Mohamed Hussein report

For the past two months, Fardous Hamran has only been able to give her two children a single meal a day. Relying on food handouts from friends, the 39-year-old manages to feed her 9-year-old son, Sam and 7-year-old daughter, Mayar, a simple meal of traditional Yemeni lahooh bread plus yogurt. Her children are losing weight fast – Sam has lost 3 kilograms (6.6 pounds) within a matter of months.

"I am scared to death thinking that my children will be next to be shown on TV as malnourished children," she admitted from her home in the capital, Sanaa.

For Safia Abduh, a mother of five, the days in which she packed her children off to school are becoming a distant memory. Her husband, a worker at the Electricity Ministry was among the 500,000 civil servants and government workers whose salaries weren't paid for two years. Unable to pay the tuition fees for their children's private education, they transferred them to a nearby public school.

Two years on, after her husband became one of the victims of the ongoing cholera epidemic, two of Abduh's children are now the main breadwinners in the family. Fifteen-year-old Samir earns less than 1,500 Yemeni rial (€5) a day, for eight hours of work at a plantation for khat, a plant chewed by millions of Yemenis, in the suburbs of Sanaa. 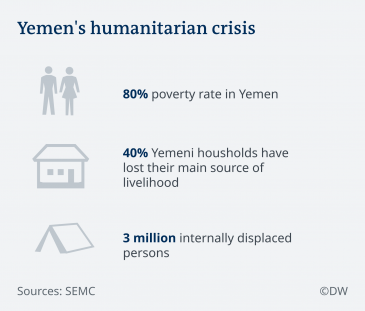 Yemenʹs economic nosedive: "the unprecedented depreciation of the rial in September 2018 proved the most severe blow to the economy since the conflict began," said Mustafa Nasr, SEMC chairman. "For the first time, Yemenis watched documented reports of citizens eating plant leaves, in spite of the fact that more than $5 billion was spent on humanitarian relief operations over the past three years"

His 13-year-old brother, Fadhel, spends his days collecting empty plastic bottles from streets and dumpsters and selling them to recycling plants in the city. Between them, they struggle to make €132 a month.

For their 46-year-old mother, their decision to leave school was heart-breaking, but she knew they had no choice. "When they broke the news to me about dropping out of school, I could not stop them," she said. "There are three other children in need of food."

Abduh and Hamran's stories are not unique in Yemen today. Rather, they are becoming the norm in a country where the UN says the crisis has become the worst in the world.

Around 22 million Yemenis, or 75 percent of the population, are in dire need of food, water and medical supplies and nearly 2 million children are severely malnourished.

The war over control of the country between the Houthi militants, said to be backed by Iran, and a coalition of Gulf states led by the government's regional ally, Saudi Arabia, is entering its fourth year and has pushed one the world's poorest nations deeper into a humanitarian crisis. Western governments are under increasing pressure to act to avert Yemen's collapse.

The country's economy has been hit particularly hard by the war. According to the World Bank, about 40 percent of Yemeni households have lost their main source of income within the past four years, with the poverty rate now up to 80 percent. The economic situation deteriorated further in September, with the rial losing almost two-thirds of its value in less than two weeks.

While the ongoing legal dispute between Qatar Airways and European aircraft manufacturer Airbus has sent shockwaves across the entire global aviation sector, it may also threaten ... END_OF_DOCUMENT_TOKEN_TO_BE_REPLACED

Like Christianity, Europe's history is one of migration. Both have strong roots in the Orient and in cultures thousands of years old. Cultural historian Bernhard Braun invites us ... END_OF_DOCUMENT_TOKEN_TO_BE_REPLACED

The ruling is part of an ongoing clampdown on dissent and minorities in the kingdom. But so far, it's unlikely to have an effect on the kingdom's newly polished image as a global ... END_OF_DOCUMENT_TOKEN_TO_BE_REPLACED

On 14 August 2022, Pakistan marked the 75th year of its founding. One day later, neighbouring India celebrated its own independence with much pomp. Despite the historical and ... END_OF_DOCUMENT_TOKEN_TO_BE_REPLACED
Author:
Gouri Sharma & Mohamed Hussein
Date:
Mail:
Send via mail

END_OF_DOCUMENT_TOKEN_TO_BE_REPLACED
Social media
and networks
Subscribe to our
newsletter