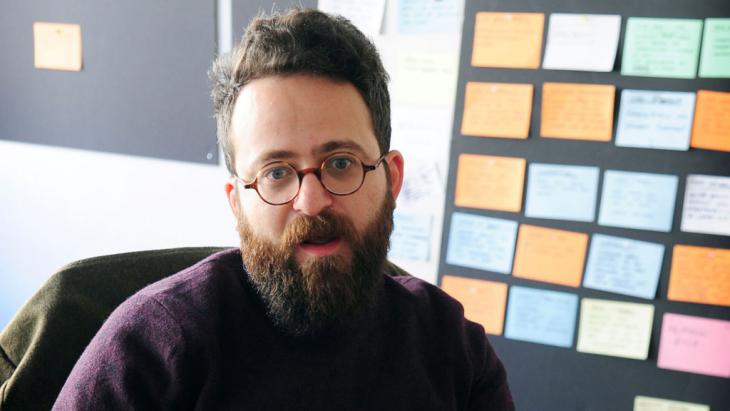 ″Testing the water... to make a change"

The movie tackles so many different aspects of life in Saudi Arabia. That’s quite daring. How did you get away with it?

Mahmoud Sabbagh: When I first wrote the film I did not have a ″romantic comedy″ in mind, as it is being referred to at the Berlinale. There is no Saudi cinema, so I had to borrow from different genres. I would describe it more as a coming-of-age film. It has quirky comedic elements. I use comedy as a tactic. We′re living through dark times in the Arab world, the discourse is dominated by terrorism, IS and so on. It′s very heavy stuff. So I made a comedy, because it opens people′s hearts.

I come from journalism. Since the 1930s it has been a liberal voice in the social dynamic of the country. I started 10 years ago as a weekly columnist for Al-Watan, a relatively progressive newspaper. There is some room for criticism of the government, the religious institutions, the penal system or other backward aspects of society. So I have come from this background – which is more tolerated by the authorities and society – and I am trying to transfer it to cinema.

Right now there is an underground movement and culture of criticism – for example, on YouTube. It comes in waves. It came after 9/11 when they started to ask questions: why do our kids get involved in suicide bombings? So more self-criticism and questioning was tolerated. And then there was another wave with the Arab Spring, especially on social media. Saudi Arabia was part of it, at least in terms of dialogue and discourse. This is reflected in art, in content production.

You make fun of the censorship and the authorities. Won′t this get you into trouble?

Sabbagh: This is the significance of what we do. We come from the grassroots. We are trying to come up with our own definitions and pace. And of course we don′t accept the government′s pace. Sometimes you have to manoeuvre, sometimes you have to deceive and be smart. I use comedy and satire. 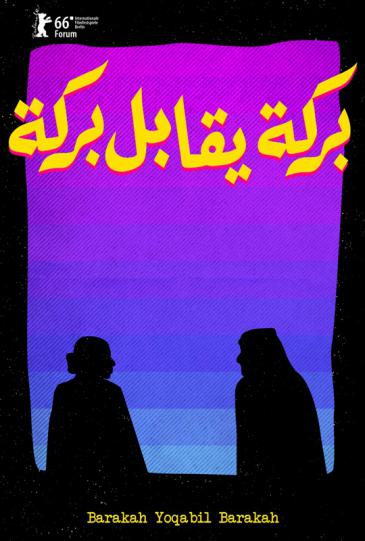 A first for Mahmoud Sabbagh: with a background in journalism, the Saudi national is in Berlin to showcase his first film, "Barakah meets Barakah": a romantic comedy that's not afraid to poke fun at the Wahabit regime. Cairo and Abu Dhabi-based Mad Solutions and the Dubai-based Fortress Film Clinic have just acquired Arab world distribution rights for the film

For example I made a decision to pixelise some scenes. Because if you buy an American or foreign DVD in Saudi Arabia, anything relating to nudity, alcohol etc. is pixelised. If you fly with a Saudi airline, such details are also blurred in the in-flight entertainment system. We′re so familiar with this, we never question it.

So I chose to use it in my film in a way to show the absurdity; to make people ask themselves, why do we actually do this? It′s crazy! Of course you have to be smart about it and there are some ″super red lines″ that we cannot touch. They are more imposed by society than the government, however. Yet, there a few grey areas and we try to raise the bar in these instances – we push it, we even try to shock sometimes.

This is the worst time for the Arab region. At the moment there seems to be a national consensus in Saudi Arabia: maybe our government is not the most efficient, but it is working and the alternative could be very dangerous. Who would have thought that Syria or Libya would look the way they do a few years ago? We challenge the status quo, but we try to do it in a responsible way.

In extreme situations art sometimes develops a special energy. Is this the case in Saudi Arabia too?

Sabbagh: If you visit Jeddah today, it is a fascinating place. There are lots of talented young people of both genders. They are trying to put their anger and energy and feelings into art form. There are no art institutions, no funding system, no official culture scene. Within this chaos, there is always opportunity. I also pushed myself to the limits exploring new forms of story telling. I kept changing the script until I thought, this is very original, this doesn′t look like any other film. It′s a beautiful thing, but you could also say it′s very selfish, since I profit as an artist while society suffers.

How did regional or international directors influence you?

Sabbagh: What I have borrowed from the New York school of new directors is to make films about anti-heroes and without traditional narratives. It is not longer about the ″Battle of Algiers″ or the ″Glory of Islam″. There is no glory about this generation; we are more anti-heroes than heroes. This is how we live as a generation. It is not a glorious life. This is the mood at the moment. Morale is not high.

Most people of our generation are disappointed. This is possibly reflected more in the form films take, than in their stories. I am personally very privileged to be invited to the Berlinale. I had no connections whatsoever. This is a chance to touch base with other filmmakers from the region and compare my work with them.

How was the movie funded and how will it be distributed?

Sabbagh: Well, it is too early to talk about distribution. There was no funding. I applied for some Arab funds, but they rejected me, maybe because I had no name. But it gave me the energy to keep fighting and look for alternative funds such as family funds. The film has a mini-budget and it was shot in a guerrilla style. 95% of the people in the film worked without a contract. They are all people we know and trust. It is a weird yet passionate way of creating art. You have to believe in those moments: like last week, when it premiered in Berlin. It was wonderful to see German cinemagoers laughing at Saudi humour.

Are you planning a screening in Saudi Arabia?

Sabbagh: Of course this is still outlawed. But we will try - there have been exceptions.

You know, there is so much wealth in the country. Many people with their big houses have their own cinemas at home. But it′s not in the public domain and there is no public infrastructure. Okay, maybe the one commercial cinema shows a movie about Ibn Battuta′s pilgrimage to Mecca. But that doesn′t count. Currently screening is not allowed. But we will try with our film because it coincides with the official discourse of reform and listening to the younger generation. We are testing the water and trying to make a change. 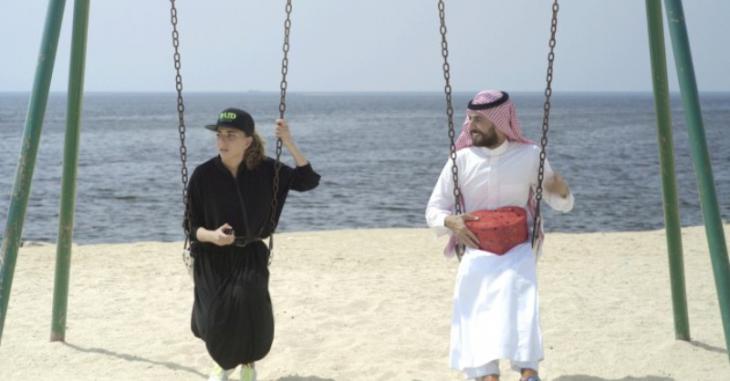 Labour of love: "95% of the people in the film worked without a contract. They are all people we know and trust. It is a weird yet passionate way of creating art. You have to believe in those moments: like last week, when it premiered in Berlin. It was wonderful to see German cinemagoers laughing at Saudi humour," comments Sabbagh

Jeddah used to have a thriving underground cinema scene in the 1950, 60s and 70s – mostly Egyptian, American or Italian films. We are a culture that is used to consume. Now, with the plunging oil price, we are moving away from being a profit-based economy to a more productive society and this will be reflected in art. So my movie is part of this changing environment.

Does the Internet provide an important space for this change?

Sabbagh: I can′t give you a definitive answer on that yet. But I think the web in Saudi Arabia has been important, it provides an alternative forum beyond government restrictions, allowing more talents to be seen on soundcloud, YouTube and so on.

In that regard it is good. But it is also something very instant. Sometimes it seems the only currency is ″like″ or ″dislike″ and there is a danger that your only aim is to satisfy others and achieve consensus. Cinema is more profound, it takes more time to make movies and they last for ever. The Internet is a great tool, but it should not be the only thing, there should always be other channels.

How hopeful are you that this new generation will ultimately create change?

Sabbagh: I feel they are becoming more proactive. You feel there is this sense of having their voices heard and of determining their own fate and destiny. They need more co-operation. They need to work together more. I would like to see more cross-regional activities involving institutions that work beyond the national borders of the Arab states and the rest of the world. These are the powerful institutions that we lack. We need more of that.

Business in the Moroccan city of Tangiers is booming due to its location at the nexus of global trade routes. But many locals are failing to reap the benefits. What they crave ... END_OF_DOCUMENT_TOKEN_TO_BE_REPLACED

Morocco and the European Union are at cross purposes when it comes to the Western Sahara. And, as Germany does not support Moroccan claims to the territory, a major conflict has ... END_OF_DOCUMENT_TOKEN_TO_BE_REPLACED

Jewish voices are much more diverse than the public often sees. Jewish men and women who oppose the injustice of Israeli occupation in the West Bank deserve our respect and ... END_OF_DOCUMENT_TOKEN_TO_BE_REPLACED

They’ve already got the Louvre; they’ll soon have a Guggenheim Museum as well – and now the Emirates have added literature to their quest for cultural supremacy in the Arab world ... END_OF_DOCUMENT_TOKEN_TO_BE_REPLACED

The Germans have a fragmented perception of the conflict between Israel and the Palestinians, and their discourse is dominated by certain catchphrases. All the while, there is a ... END_OF_DOCUMENT_TOKEN_TO_BE_REPLACED

An unusual organisation brings Jews and Muslims together to fight hate and promote dialogue. In the small central German city of Marburg they have been jointly calling for an end ... END_OF_DOCUMENT_TOKEN_TO_BE_REPLACED
Author:
René Wildangel
Date:
Mail:
Send via mail

END_OF_DOCUMENT_TOKEN_TO_BE_REPLACED
Social media
and networks
Subscribe to our
newsletter