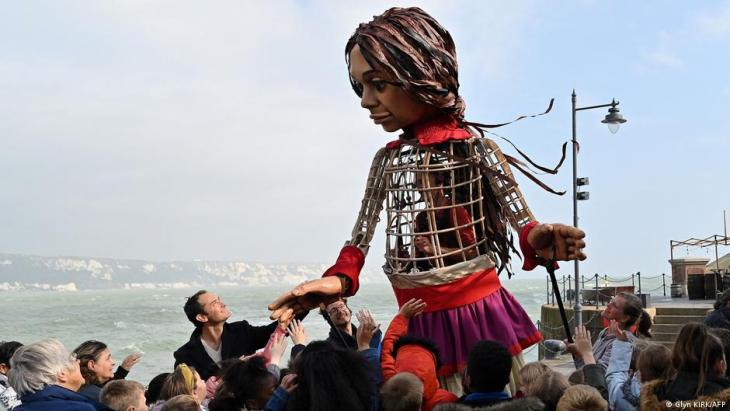 Every year in December, the team at Qantara.de takes a look back at the articles that proved most popular with our readers. This year is no different. Here is a run-down of the stories that mattered most to you in 2021. Happy New Year to all our readers!

Almost two years on, the coronavirus pandemic continued to dominate lives and headlines around the world throughout 2021. It was also a year of important anniversaries: the tenth anniversary of the start of the Arab Spring and the Syrian civil war and the twentieth anniversary of 9/11. Throughout the year, Qantara.de has provided background information and in-depth analysis on a wide variety of key events and issues in the Islamic world, including the US withdrawal from Afhanistan and its tragic and chaotic aftermath, a coup in Sudan and a presidential power-grab in Tunisia, the election of a new president in Iran and a new prime minister in Israel, the Turkish lira in freefall, India's President Modi under pressure from farmers and refugees knocking on Europe's door. But these weren't the only topics of interest to our readers: here are the ten most-read articles on Qantara.de in 2021.

1.     Prostitution in the Islamic Republic of Iran: Open-minded, loving... and desperate

How did the Islamic revolutionaries deal with prostitution and sex workers in Iran, and how does the business of sex work in Iran today? Have supply and demand changed four decades after the ayatollahs came to power? By Nasrin Bassiri

2.     The "India Love Project" on Instagram: Fighting hate with love

Marrying for love is still quite a rare thing in India. Religion often gets in the way, as do caste and parental opinions. After the defamatory term "Love Jihad" started trending on Twitter, three journalists set up the "India Love Project" on Instagram to share stories of love that have transcended boundaries and discrimination of all kinds. By David Pfeifer

3.     Teenage pregnancies in Pakistan: What sex education is really about

5.     The Persian poetry of mathematics: From Omar Khayyam to Mirzakhani – Iran's beautiful minds

7.     Coronavirus in the Middle East: Rumours of vaccine tourism in Dubai unfounded – for now

Despite media reports to the contrary, travel agents say there's no such thing as vaccine tourism in Dubai right now. Currently only residents and nationals may access vaccinations there. But, they add, that could change. By Cathrin Schaer & Gasia Ohanes

8.     Interview with art historian Wendy Shaw: What is art, when the primary sensory organ is the heart?

How can we truly appreciate the richness of cultures not our own? In her recent book "What is Islamic art? Between religion and perception", art historian Wendy Shaw explains the need to abandon our vision-centred perception of art and the aesthetic, embarking instead on a multi-sensory voyage of discovery. Interview by Lucy James

9.     Religion and media in Turkey: Reviving Sufism with Yunus Emre

The TV series "Yunus Emre: The journey of love" was a massive hit in Turkey when it was first aired four years ago. But this popular television spectacle is not the only evidence of a renewed interest in Sufi spirituality in Turkey. Marian Brehmer reports from Istanbul

Philosopher Juergen Habermas was due to be awarded a major Arab prize in Abu Dhabi, but has turned it down following criticism. This decision torpedoes Arab efforts at a substantive cultural dialogue and exposes the West’s moral hubris, says Stefan Weidner

Since returning to power in Afghanistan, the Taliban have steadily eroded the rights and opportunities of women and girls, particularly their access to education. But Afghans are ... END_OF_DOCUMENT_TOKEN_TO_BE_REPLACED

German imams have publicly expressed their solidarity with the women of Afghanistan. In a letter of protest, the clerics say that the Taliban regime's decree barring women from ... END_OF_DOCUMENT_TOKEN_TO_BE_REPLACED

At the end of every year, the team at Qantara.de gives you a run-down of the ten most-read articles on the site over the past 12 months. Here is a quick overview of the stories ... END_OF_DOCUMENT_TOKEN_TO_BE_REPLACED

The "Weiter Schreiben" (Keep Writing) project promotes literature from war-torn and crisis-stricken regions and has, most recently, shone its spotlight on Afghanistan. Afghan ... END_OF_DOCUMENT_TOKEN_TO_BE_REPLACED

The Islamic Republic has been unable to quell the civil unrest that erupted three months ago, after Mahsa Amini died after being detained for violating hijab rules. Now the ... END_OF_DOCUMENT_TOKEN_TO_BE_REPLACED

Education for girls and women is still possible in Afghanistan, says Reinhard Eroes of the Kinderhilfe Afghanistan initiative. In interview with Elisa Rheinheimer, he talks about ... END_OF_DOCUMENT_TOKEN_TO_BE_REPLACED
Date:
Mail:
Send via mail

END_OF_DOCUMENT_TOKEN_TO_BE_REPLACED
Social media
and networks
Subscribe to our
newsletter