No Paradise in Pakistan

As the wife of a diplomat, the Dutch journalist Betsy Udink has seen the world. On her travels, she spent three years in Pakistan. In her book, she denounces Pakistan as "the most deadly country in the world" for women. A review by Susan Javad 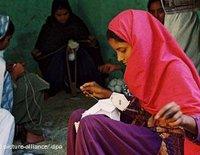 Women in Pakistan are lucky when they are in prison, Betsy Udink suggests. Here at least, says the author, they are safe from their families

​​It's no fun being a woman in Pakistan. According to Amnesty International, 1,250 women were victims of honour killings there in 2004 alone. These are the official figures, the actual number of honour killings is in all likelihood much higher.

Let me get straight to the point: anyone expecting Betsy Udink's book, "Allah and Eve", to provide general information on the status of women in Islam is in for a disappointment. In contrast to the very general title of the book, the author focuses exclusively on Pakistan and only concentrates on her actual subject for the first half of the book.

In the second half of the book, she turns her attention to other dark sides of Pakistani society. Child abuse, the persecution of Christians and non-Sunni Muslims, organ trafficking, and corruption among the country's elite are just some of the issues she addresses.

The tender flower known as honour

In her easily readable journalistic style, she links chapters that have often no more than a vague connection to one another and mixes personal impressions with hard facts – frequently with a heavy dose of pathos.

She gets straight to the nitty-gritty on the very first page. The reader is transported to a women's penitentiary in Peshawar, where the author introduces us to Gulnaz, Nafisa, and several other inmates. All of them have their husbands, fathers, or brothers to thank for the fact that they are behind bars. These men accused the women of fornication, a perceived slur on the family's honour and a criminal offence in Pakistan.

That being said, the women are lucky to be in prison. Here at least they are safe from their families. According to the prisoners, killing female relations for supposedly insulting the honour of the family is "par for the course here".

In Pakistan's patriarchal, tribal society, a bagatelle is sometimes all it takes to be accused of such a crime.

The stories related by Udink are horrific and the reader shares her fury and consternation at so much everyday injustice. The horror is merely intensified by the stark contrast between the cosy world in which Udink lives (her beautiful garden and her strong, independent daughter whose freedom she wishes on all women in Pakistan), and the nightmarish reports of rape, murder, and mutilation that would appear to be a daily occurrence in Pakistan.

"Allahu akbar" instead of applause

But what have these dreadful stories got to do with Islam? Udink attempts to answer this question in a roundabout way and fails.

She takes the reader to a conference organised by the "International Muslim Women Union", a women's organisation with a fundamentalist Islamic slant. These chapters are perhaps the most powerful in the book because they highlight the reactionary interpretation of Islam by fundamentalists in a depressingly frightening manner.

These fundamentalists compare what they see as the corrupt West with Islam, which they consider to have "the more superior morals and ethics". By means of clever, yet clumsy re-interpretation, they turn every instance of discrimination against Muslim women into the proof of their privilege.

When the "sisters", as the conference delegates call themselves, decide to replace "un-Islamic" applause with shouts of "Allahu akbar", the reader would probably laugh in disbelief were the situation not so frightening.

Using clearly fundamentalist statements and pamphlets, Udink attempts to show the reader that "the subjugation of women is an integral part of Islam". She goes on to say that no feminist Islamic ideology will ever change this. For Udink, the situation of women in Pakistan is directly linked to Islam itself.

​​Despite the fact that the book's dust jacket claims the exact opposite, Betsy Udink makes sweeping accusations against and condemnations of Islam, and for this she deserves criticism.

The surprising thing is that she herself makes repeated references throughout the book to the fact that human rights abuses in Pakistan largely have their roots in society. The problem is the country's feudal hierarchical social structure, which finds its embodiment in a political class that exploits the country and is not interested in social progress for all.

It is not Allah who is subjugating Eve; her biggest enemy is a deeply corrupt Adam.

END_OF_DOCUMENT_TOKEN_TO_BE_REPLACED
Social media
and networks
Subscribe to our
newsletter