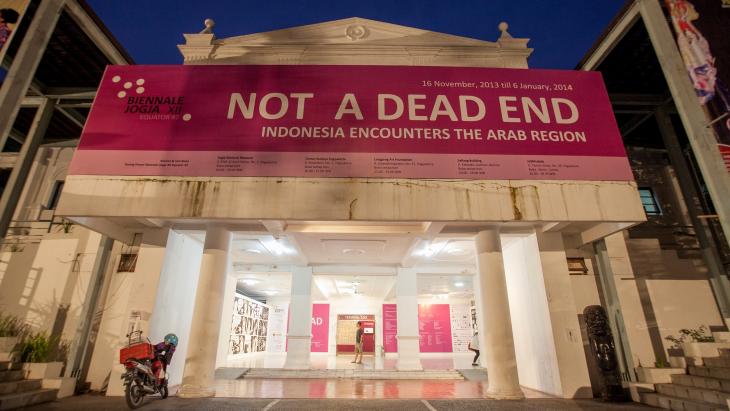 Thirty-five artists and artists' groups from Indonesia and a selection of Arab countries are presenting their work as part of the Equator series at this year's Biennale Jogja in Yogyakarta. Christina Schott took a look around

The links between Indonesia and the countries of the Arab world are centuries old. Arab spice traders made their way to the Indonesian islands as early as the eighth century. From the thirteenth century on, they helped the spread of Islam across various regions of the archipelago, and their influence found its way not only into the Indonesian language but also permeated Indonesia's forms of governance, architecture, art and culture.

It is no surprise, therefore, that the selection of the Arab region as partner for the twelfth Biennale Jogja, one of the most important contemporary arts events in Indonesia and South-East Asia, generated high expectations. The exhibition, entitled "Not a Dead End", is the second part of the "Equator" series, which began in 2011 with India as the partner country.

The aim of the "Equator" series, which is to run until 2022, is to focus on the equatorial regions. In so doing, it will attempt to break down the entrenched north-south/rich-poor divides that have also had such an impact on the global discourse of contemporary arts.

A total of 35 artists and artists' groups are exhibiting their works in five galleries in Yogyakarta: 19 from Indonesia, eight from Egypt, two from the United Arab Emirates (UAE) and one each from Oman, Palestine, Saudi Arabia, and Yemen, along with one each from India and the Netherlands.

Images of a syncretic Islam

"Naturally, our focus lay on social, cultural and in particular on religious relations. This was inevitable really, because the cultural histories of Indonesia and the Arab countries have been linked through Islam for centuries", explains curator Agung Hujatnikajennong in his introduction. "It would be a misleading simplification, however, to lump Indonesia together with the Arab region just because of the similarities in their religious identities. Islam in Indonesia has an identity of its own. There are numerous rituals and traditions that show that a large part of the population in Java and Yogyakarta practise a syncretic Islam."

Precisely this issue was taken up by F.X. Harsono, an artist of Chinese descent, who conducted exhaustive research for his installation in his home region, the Javanese coastal city of Cirebon, where Arabian, Chinese, Javanese and Sudanese influences have created a unique hybrid culture.

His installation, "Purification", consists of an accumulation of finds from local markets including Chinese wall hangings and cheap aluminium kettles bearing depictions of camel caravans with sand dunes and palm trees, sometime souvenirs for returning Hajj pilgrims. For the installation, Harsono arranged some of these finds as if they were valuable museum pieces. 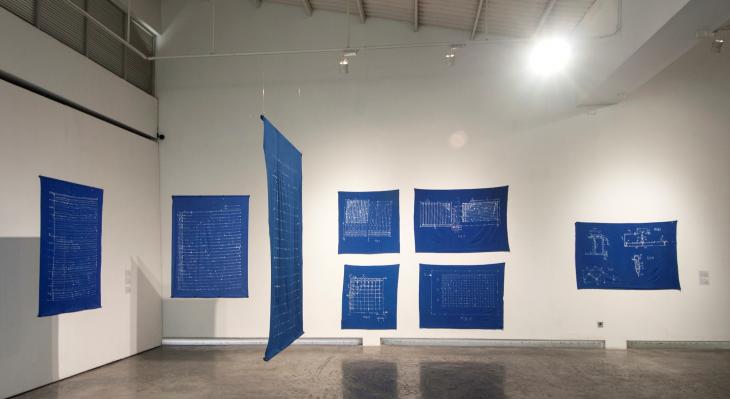 In her installation, Dina Danish applied the technical drawings of an electronic stylus and a computer keyboard to bright blue panels of fabric using a batik-dyeing technique

The conversion of such simple everyday objects into status symbols forces visitors to think about the meaning of the Mecca pilgrimage and the spiritual purification it offers. This effect is reinforced by the sight of a Chinese-Javanese tea table behind which runs a recording of an old syncretic ritual.

Graphic and performance artist Tisna Sanjaya from Bandung also staged a syncretic ritual for the opening ceremony: aboard a swinging funfair boat, he conversed with an Islamic prayer leader and tossed coloured balls into the crowd of spectators as musicians in Javanese costumes sang a traditional song to accompany a kind of seated dance. Unfortunately, the onset of rain put paid to the intended effect of the spectacle.

Photographs and videos by Saudi artist Ahmed Mater, on the other hand, provide an extremely sobering image of the "pure" Hajj. Around three million people roll along the concrete pedestrian highways during the pilgrimage season, past countless building sites where new pilgrim accommodation is under construction, and barely heeded by the local high society in their plushly upholstered luxury apartments overlooking the Kaaba.

Focus on pilgrimage and labour migration

Surprisingly, none of the most recent political changes in the five Arab countries selected play a part in any of the works featured. "Of course all the important issues were discussed. But in the end, what was selected also had to be of significance for Yogyakarta and Indonesia," explains Yustina Neni, director of the Yogyakarta Biennale Foundation, which is organising the exhibition. "In the context of our partner countries, these issues were primarily the Hajj and labour migration, but also ordinary, everyday life."

In order to allow artists to gain the necessary insight into everyday life in each of the countries, a residence scheme was introduced for this year's Biennale: Indonesian installation artists Duto Hardano and Venzha Christiawan travelled to Cairo, while multimedia artists Prilla Tania and Tintin Wulia each worked for a month in Sharjah. In return, Dina Danish and Magdi Mostafa from Egypt, Salwa Aleryani from Yemen, and Ubik, an Indian based partly in Dubai, spent some weeks in Yogyakarta.

There is an enormous diversity in what they have produced. While Ubik deals with Indonesia's (anti-) communist past in his detailed wall installation "Of Specter and Objects", Dina Danish has experimented with a modern interpretation of Javanese batik technique – documented in her works "Electronic Stylus" and "Polytel Keyport" – in which the technical drawings of an electronic stylus and a computer keyboard are applied to bright blue panels of fabric using a batik-dyeing technique.

In Sharjah, Australian-based Indonesian Tintin Wulia, on the other hand, focused intensively on the phenomenon of global nomadism. In her impressive sound installation "Babel", voices in different languages are heard whispering, singing or shouting contemporary Arab poems and songs from trees, from behind stairs and pillars, or from the lush garden of the SaRang gallery.

It is not merely the social and linguistic limitations of travellers, migrants or the homeless that this piece of work makes so clear, but also the difficulty of communicating on equal terms even after such barriers have been overcome.

Home
Print
Newsletter
More on this topic
Biennale in Yogyakarta: Art in the Dangerous Terrain of Religion and PoliticsArt and Islamism in Indonesia: When Creativity Is a SinIndonesian Artist Arahmaiani: Sex, Religion and Coca-Cola
Related Topics
Dialogue of Cultures | Intercultural Dialogue, Islamic art, Visual arts
All Topics

Water buffalo and oxen have been part of the work in Indonesian fields for centuries. But the draught animals are no strangers to sport either, as can be seen in two traditional ... END_OF_DOCUMENT_TOKEN_TO_BE_REPLACED

According to the latest Reuters tally, more than 2.54 million people are now reported to have been infected by the novel coronavirus globally and 177,004 have died. As Muslims ... END_OF_DOCUMENT_TOKEN_TO_BE_REPLACED

Around the Islamic world, lockdowns and curfews are being extended and religious ceremonies are being cancelled outright in the hope of slowing the spread of COVID-19. Here’s the ... END_OF_DOCUMENT_TOKEN_TO_BE_REPLACED

While some are beginning to protest the lockdown, others are unable to bury their loved ones in accordance with Islam. Here’s the latest from across the region END_OF_DOCUMENT_TOKEN_TO_BE_REPLACED

Coronavirus continues unabated. Iran remains a hub of infection, war-torn Syria has recorded its first case and Yemen is bracing itself for the worst. Here’s the latest from ... END_OF_DOCUMENT_TOKEN_TO_BE_REPLACED

As COVID-19 sweeps across the globe, it is forcing religions to adapt and take action to prevent infection. But experts warn against using the crisis to fuel conspiracy theories. ... END_OF_DOCUMENT_TOKEN_TO_BE_REPLACED
Author:
Christina Schott
Date:
Mail:
Send via mail

END_OF_DOCUMENT_TOKEN_TO_BE_REPLACED
Social media
and networks
Subscribe to our
newsletter