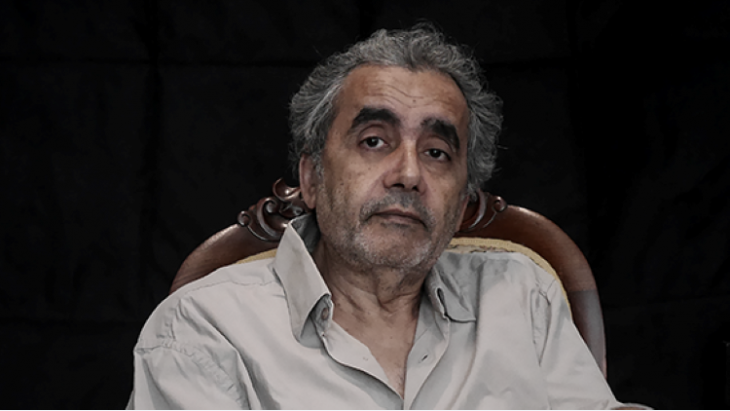 The Algiers book fair has taken place for the 25th time, following a two-year break owing to the pandemic. Independent Algerian publisher APIC used the occasion to showcase its avant-garde poetry series, initiated by the Algerian poet and ethnologist Habib Tengour. Interview by Regina Keil-Sagawe

The focus of this year’s book fair in Algiers, which took place from 24 March to 1 April, with the strapline "The book: a bridge to memory" ("Le livre passerelle de mémoire"), was on the themes of contemporary history and commemorative culture. 1250 exhibitors from a total of 36 countries, among them 266 Algerian, 324 Arab and 660 foreign publishers, presented around 300,000 titles. Particularly remarkable was the stand of the maverick Algerian indie press Editions APIC, founded in 2003 by husband and wife team Samia Zennadi-Chikh (originally an archaeologist) and Karim Chikh (originally an electrical engineer). Since 2018, they have been publishing a series of books entirely unique in the Maghreb.

"Poemes du Monde" – "Poems of the World", as the bibliophile series is called, has grown over the past four years to include 23 titles, with a current total of 16 male and seven female voices, representing a broad poetic panorama. It was started by the Algerian poet and ethnologist Habib Tengour, whom Regina Keil-Sagawe spoke to at a reading in Montpellier.

Mr Tengour, what made you come up with the idea of publishing an international poetry series in Algeria, where publishing houses already have a pretty difficult time?

Habib Tengour: Now that I’ve reached a "respectable" age, I feel the need to pass something on to the next generation. Why shouldn’t I allow young Algerian poets, who often have difficulties leaving Algeria, getting hold of books from other countries and informing themselves about trends beyond the country’s borders, to profit from my knowledge?

And what made you choose APIC as a publisher?

Tengour: The chemistry between the founders of Editions APIC – Karim Chikh and Samia Zennadi – and me was there from the start. They have been publishing my books since 2013  and I managed to convince them of the symbolic significance of a poetry series the like of which was not to be found anywhere in the Maghreb. Even if it doesn’t make them any money, over time the names of the poets they are publishing will bring the publishing house a certain renown. 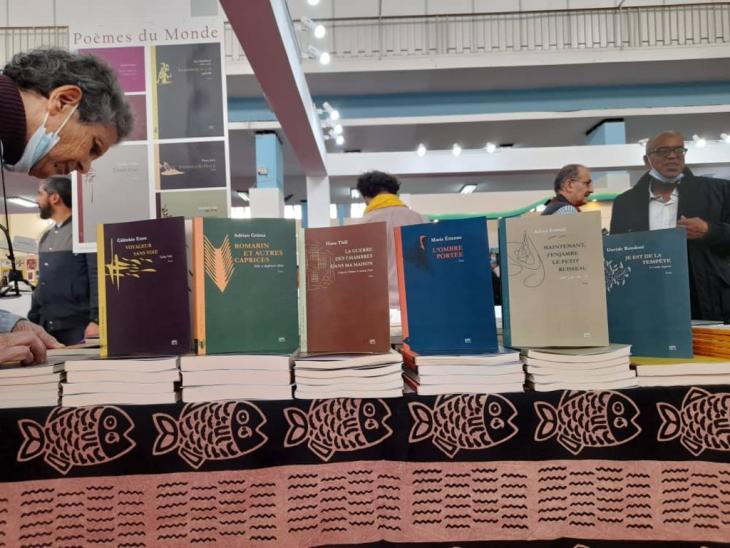 APIC's stand at the Algiers book fair: founded in 2003 by Salima Zennadi-Chikh and Karim Chikh, this idiosyncratic Algerian independent publishing house began publishing a poetry series in 2018 that is unparalleled anywhere in the Maghreb. "Poemes du monde" – "Poems of the World" – is the name of the bibliophile collection, which has grown to 23 titles within four years and, with 16 male and 7 female voices so far, already presents a wide-ranging panorama of poetry. The project is the brainchild of Algerian poet and ethnologist Habib Tengour

A poetry edition unique in the Maghreb

There are three Arab authors in the series you began in 2018: Abdellah Zrika, pioneer of Morocco’s modern poetry; Ghassan Zaqtan from Palestine, who was one of the founders of the House of Poetry in Ramallah and is regarded as one of his country’s most innovative poets; and the Lebanese poet, translator and cultural anthropologist  Issa Makhlouf, who lives in Paris. The series brings out seven titles per year and the international texts are printed as bilingual editions. Is that a first for the Maghreb?

Tengour: These editions are an absolute first. Of course, foreign poetry is published in Morocco or Tunisia as well, but as far as I know, nowhere else has used the principle of a series of dual-language editions. Each features an introduction and 7 questions about the author's biography, their self-image as a poet and the importance they attach to literary translation – after all, the authors in the series are all simultaneously poets and poetry translators.

How large are the print runs?

Tengour: Poetry doesn’t enthral the masses anywhere in the world. And Algeria is no exception to that rule. For that reason, the major publishers have no real interest in poetry. Our first editions range from 300 to 500 copies.

Collector’s items, then! And who are your readers? What has the reception been like on a national and international level?

Tengour: We don’t have any statistics. But the media response has been positive: Le Monde, Liberte (Algeria), El Watan (Algeria), L'Orient le Jour (Lebanon) – and our sales are not bad at all, mostly at readings and book fairs. I was invited to the Maison de Poesie in Montpellier on 18 March with two of my authors, Laure Cambau and Mia Lecomte. Laure Cambau was promoting her collection Grand motel du biotope (APIC 2020), which was nominated for the 2020 Prix Apollinaire and the 2021 Prix Mallarme, and Mia Lecomte read from her collection La ou tu as ton corps / La dove hai il corpo (APIC 2021). It won the Prix Venus Khoury-Ghata in October 2021, which is a women’s prize.

So how is the series financed outside of readings and book fairs? Is there any funding, from the Algerian cultural ministry, for example?

Tengour: No, not at all. Part of the edition is financed by the Institut Francais in Algiers. And then during the two years of COVID, the TAMAAS art and culture foundation founded by Sarah Riggs and Omar Berrada helped us a lot. The authors supported us, too. I am always looking for sponsors; occasionally I also put in some of my own money.

A polyglot network of poetic voices

Maybe things would be different if you were to also commission translations into Arabic?

Tengour: Sure, translations into all three languages – Amazigh, Arabic and French – would be ideal. But personally, I only feel qualified for the French component. I hope that one day, our amazighophone and arabophone literary colleagues will take on the translation into the other languages. 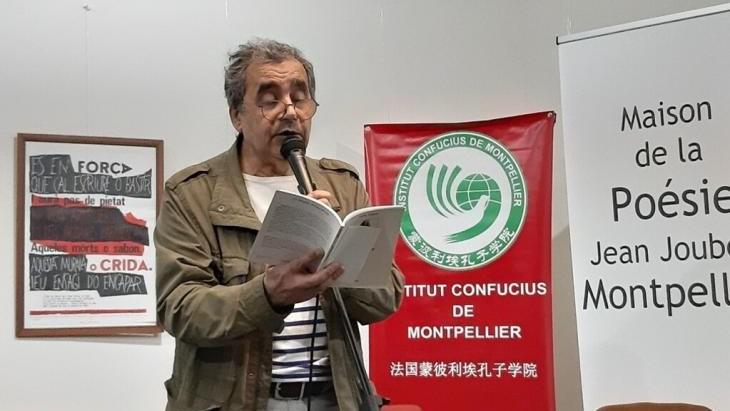 Algerian ethnologist and poet Habib Tengour at a reading in the Montpellier House of Literature. He is the initiator of the poetry series "Poems of the World" ("Poemes du Monde"). "The series is an absolute novelty," says Tengour in conversation with Regina Keil-Sagawe. "Of course, foreign poetry is also published in Morocco or Tunisia, but as far as I know, nowhere else in the Maghreb is there the principle of a bilingual series edition, complete with an introduction to the work, a short biography and a questionnaire asking the same seven questions of each author"

It would be quite a task. The "Poemes du Monde" series already comprises 23 titles, a polyglot network of poetic voices that spans the globe. In 2019 it gained seven voices, and with Frédéric-Jacques Temple, Laure Cambau, Mia Lecomte and René Corona, Charles Bernstein, Debasish Lahiri und Yusef Komunyakaa, the spectrum stretches from Kolkata to Louisiana. And in 2020, Sweden was added to that with Lasse Soderberg. What are your selection criteria?

Tengour: Well, I didn’t start writing yesterday, and over my lifetime I’ve had plenty of opportunities to meet poets from all over the world at poetry festivals. And I picked out those to whom I felt particularly close on both a human and a literary level, the people whose approach to language seemed interesting and original enough for me to want to make them accessible to an Algerian readership. For me, it’s about presenting exceptional and also very different positions in contemporary poetry from all around the world.

Of course, I first have to persuade the authors and translators to let me have their original manuscripts free of charge. And I am always asking writers who are friends of mine to put me in touch with poets from regions that I’m less familiar with, such as Asia or Latin America, to broaden my horizons.

The dream of a poetry festival in Algiers

Seven new titles in seven languages have just been launched at the book fair in Algiers, and the series is more cosmopolitan than ever. Alongside French, English, Libyan Arabic (Ashur Etwebi) and Italian, you’ve also got works translated from Maltese, Turkish and German for the first time. "Krieg der Zimmer in meinem Haus – La Guerre des chambres dans ma maison" (War of the rooms in my house) is what the Heidelberg poet Hans Thill called the collection he put together for you. Given that you usually translate from Arabic and English, what was it like to translate German poetry for the first time?

Tengour: I first felt the desire to translate modern German poetry in 2017 when I was a DAAD artist in residence in Berlin. After a year there, with nothing but the sound of the German language in my ears, I had this real urge to translate a German poet. And it was no coincidence that I chose Hans Thill. I’ve known him for years, and I really like his style. We discussed his text and my translation a lot, and in the end it even gave me a deeper insight into my own writing.

You will be turning 75 on 29 March. You may not have lost the image of the youthful rebel and "famous unknown", but you are now one of the doyens of the Maghrebi literature scene and an authority in the world of francophone poetry. You recently even joined the editorial committee of the Parisian poetry magazine Po&sie, which was founded by Michel Deguy in 1977. How do you feel about all this?

Tengour: If I could, I’d catapult myself back to my wild thirties, back to the 1970s, when I was writing Tapapakitaques, my satire of the 1968 revolutionaries … It makes me sad that so many good friends have left us already. I still have a few major literary projects left that I absolutely have to finish before I go. My great Algerian epic probably won’t be as long as I planned now, but I’m making progress with it.

And your greatest dream?

Tengour: I dream of being able to organise an international poetry festival in Algeria. Perhaps the "Poemes du Monde" series will help me to realise that dream, one day.

The individual volumes of the series "Poemes du Monde" by the publisher APIC are available in Europe from Editions Qatifa.

Together with Herve Sanson, Regina Keil-Sagawe is currently editing a commemorative volume for the author's 75th birthday, which will be published by APIC in Algiers in May.

Nouara may be 65, but she is ready to join thousands of others who burn their ID and pay traffickers for the chance of a new life in Europe. Zineb Bettayeb reports END_OF_DOCUMENT_TOKEN_TO_BE_REPLACED

In Doha, Arabs from Morocco, Tunisia, Egypt and Algeria are gathering to celebrate the first ever FIFA World Cup to be held on Arab soil. The criticism from Europe? Over the top, ... END_OF_DOCUMENT_TOKEN_TO_BE_REPLACED

"Rebel Game: The Power of Football in the Middle East and the Qatar World Cup", an anthology published by Middle East researchers Jan Busse and Rene Wildangel, takes the upcoming ... END_OF_DOCUMENT_TOKEN_TO_BE_REPLACED

After a two-year hiatus, the Arab League re-convened at the beginning of November in Algiers against a backdrop of uncertainty and discord. By Pierre Boussel END_OF_DOCUMENT_TOKEN_TO_BE_REPLACED

The history of Jews and Muslims is far more entangled than you might imagine – but you have to listen out for it. In "Recording History", Christopher Silver takes us on a sonic ... END_OF_DOCUMENT_TOKEN_TO_BE_REPLACED

Welcome to the world of Al Qasar, where Arabic music collides head-on with punk and psychedelic to create something powerful and beautiful. "Who Are We" is a raucous, subversive ... END_OF_DOCUMENT_TOKEN_TO_BE_REPLACED
Author:
Regina Keil-Sagawe
Date:
Mail:
Send via mail

END_OF_DOCUMENT_TOKEN_TO_BE_REPLACED
Social media
and networks
Subscribe to our
newsletter