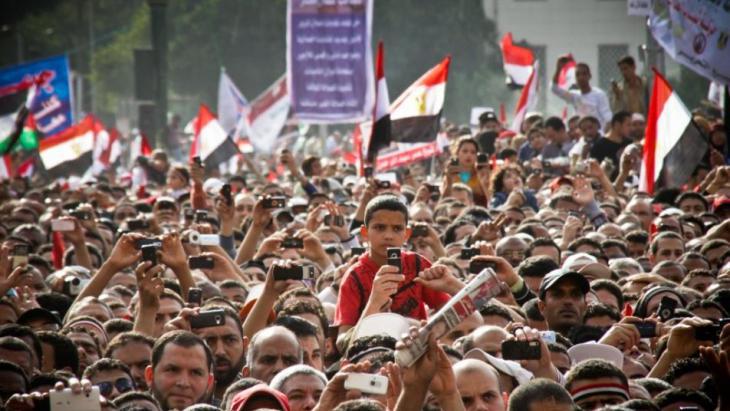 The illustrated book "Cairo. Open City. New Testimonies from an Ongoing Revolution" by Florian Ebner and Constanze Wicke casts a critical eye over the media portrayal of the Egyptian revolution. Shohreh Karimian reviews the publication

In 2013, the acclaimed collection of photos entitled "Cairo. Open City" was exhibited at the Folkwang Museum in Essen, Germany. Just like the eponymous volume published in May 2013 by Florian Ebner and Constanze Wicke, the exhibition included pictures by photojournalists, activists and artists and documented the deep divisions in revolutionary Egypt.

The book, which includes texts in Arabic, German and English, opens with a gallery of diverse images encompassing a selection of the works shown in the exhibition: from historical photographs through photo community images to pictures by news agencies and citizen journalists.

The text component of the book, which is 46 pages long and comes after the first picture gallery, forms the content-related heart of the book. In addition to an introduction from the publishers, the written element includes a text written in the form of a letter by the video filmmaker and author Philip Rizk, who was born in Cyprus and lives in Egypt. It also includes an essay by the Egyptian artist Lara Baladi. These texts, which are rather academic in nature, are subsequently supplemented by interviews, tweets and video scenes as well as presentations from various media collectives in Egypt.

In the introductory section of the book, the publishers tell of what they describe as the "rather naive empathy" they felt at the outset of their project: an enthusiasm for the Egyptian revolution that was born of the countless reports, news pieces and articles in the media that had people all over the world on the edge of their seats.

The authors primarily explored the question of whether in the Arab Spring, the democratic dimension, "which would appear to be written into digital culture", had assumed "real concrete form". But during the course of their stays in Cairo and after working together with photographers and artists, their approach changed. Their initial empathy was transformed into a primarily empirical collection of viewpoints and actions.

Accordingly, the book should not be viewed as a "commemorative volume in celebration of the revolution" but instead – as the publishers emphasise – as a kind of typological cross-section of the photos produced during the revolution, a sort of photo album of this complex social and political process of upheaval.

In his contribution, Philip Rizk addresses the readers directly and calls on them to revise and expand upon their image of the revolution in Egypt. He speaks of a media glorification of the revolts and the attendant reduction of the protests to an Internet-savvy, educated and young middle class – according to Rizk, a group not at all representative of the popular uprising on Tahrir Square.

"Did you hear the voices of the underclass? Did you see the family members of the martyrs clad in black and mourning in their homes?" Rizk seeks to make sure that the reader is aware who the driving force behind the revolution in Egypt really is and who is representing it.

For him, the events of January 2011 on Tahrir Square are an "uprising of discontent against the political reality within the neocolonial condition". Compared with the revolts of 1968 in the West, which serve as a point of reference for a broad emergence of intellectual and in some cases revolutionary ideas and theories, he believes the events of 2011 are devoid of any ideology. He writes: "There was no ideology but the ideology of desperation".

Challenges and dangers of citizen journalism 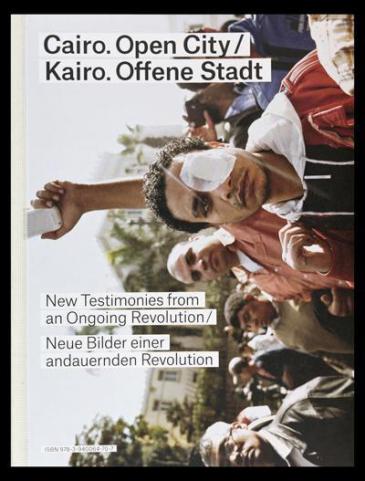 The authors of the book emphasise that it is not intended to be a hymn to the revolution, but seeks instead to provide a cross-section of the photos produced during the revolution

In her essay, the Egyptian artist Lara Baladi focuses primarily on the question of the function and perspectives of the images that the people on Tahrir Square made and recorded. Within this context, she explores the concept of citizen journalism and describes 9/11 as "the first major historical twenty-first-century event to be documented by hundreds of people with digital cameras". It was, she says, the birth of citizen journalism.

Baladi believes that as a result of the digitalisation of photography, the "Internet frenzy" and the emergence of social media, we are now dealing with a democratisation of photography. The new mass medium that is the Internet makes it possible to produce images ourselves and make these available worldwide. This is particularly pertinent to Tahrir Square, where people recorded what they wanted to capture and share with the world. Baladi also emphasises that this act of taking photographs became a political activity in Egypt.

But the efficiency introduced by digital photography is also a risk: "Images are distributed at tremendous speed and there follows a lack of critical distance over their reading," she writes. Images can also be processed and manipulated with picture-editing programmes.

Photographic and filmic confrontations with the revolution

The work of both authors, Ebner and Wicke, provides a well-rounded package of photographic and filmic confrontations with the Egyptian revolution, from Heba Farid's collection of historic images to filmic portrayals by Kaya Behkalam.

The media also find their place in the book: the title pages of national and international (daily) newspapers are placed in juxtaposition and convey some paradoxical insights.

"Cairo. Open City. New Testimonies from an Ongoing Revolution" forces readers to revise their image of the Egyptian revolution thus far conveyed by the media. In this process, photographs and films that grapple with the revolution play an extremely important role. Each and every image tells another story and serves as an alternative form of reporting. This means that the publishers' goal has been attained: the illustrated volume does not see itself as a homage to the Egyptian revolution, but as a collection of various perspectives in image form.

Shohreh Karimian
© Qantara.de 2014
Translated from the German by Nina Coon
"Cairo. Open City. New Testimonies from an Ongoing Revolution" published by Florian Ebner and Constanze Wicke, Spector Verlag, Leipzig 2013, 264 pages
This article was updated on 24.11.2014 to include corrections to some quotes from the book.

Since President Abdul Fattah al-Sisi seized power in Egypt in 2013, he has ruled the country with an iron fist. Civil society, opposition and free press struggle to survive. Tens ... END_OF_DOCUMENT_TOKEN_TO_BE_REPLACED

The lack of grain supplies from Ukraine is forcing Egypt to act. Now even the Toshka project is being revived to grow grain in the desert. Birgit Svensson travelled to see it END_OF_DOCUMENT_TOKEN_TO_BE_REPLACED

In this unusually beautiful book of images and text, published in German and Arabic, artist Marianne Manda presents her own unique take on the megacity of Cairo. In over fifty ... END_OF_DOCUMENT_TOKEN_TO_BE_REPLACED

A stage, lights, a mesmerised audience: it looks like an Egyptian folkloric concert, but Umm Sameh is singing to heal the sick by driving out the demons that possess them END_OF_DOCUMENT_TOKEN_TO_BE_REPLACED
Author:
Shohreh Karimian
Date:
Mail:
Send via mail

END_OF_DOCUMENT_TOKEN_TO_BE_REPLACED
Social media
and networks
Subscribe to our
newsletter