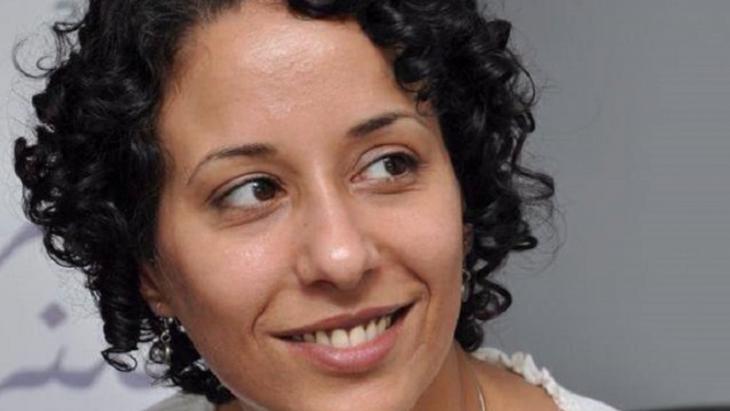 There is a moment at the centre of ″The Apartment in Bab El Louk″ that captures the book′s dark, alienated mood. The narrator is standing on a balcony, looking down at Talaat Harb Square, where Egyptian Central Security Force trucks are massing.

This scene is a marker of both the main character′s social and political alienation. It comes in the first section of the book, a debut collaboration between writer Donia Maher and two artist-illustrators. The whole text is set in and around a building in Cairo′s downtown Bab El Louk neighbourhood, where you can find the country′s interior ministry as well as its iconic Talaat Harb and Tahrir squares.

The first part, illustrated by Ganzeer, unfolds in an intimate second person. As the narrator stands outside, protest chants float up to the balcony. The text tells us, ″You′ll be filled with empathy, eventually, and decide that you′re: Off to protest in Talaat Harb.″ But the giant image spread out below doesn′t depict fellow protesters. Instead, it′s a line of grim and bored-looking police covered up by shields, helmets and sticks. Their bodies are rendered in black and white, their eyes shadowed or looking away from the reader. Only their shields have colour.

The next page brings the reader to the edge of the square. The oversaturated black-and-white image shows a few passersby in the distance, hurrying on, but no protesters. There is one spot of colour at the middle – the statue of Talaat Harb (1867-1941) – but the statue, too, turns its back to us. We never do find the protesters: ″You′ll walk around the square for two hours, hearing protesters but never seeing them. You′ll stand there for a moment, but someone next to you will tell you to move along.″ 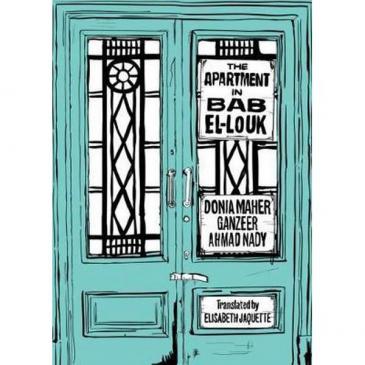 Close-up on Bab El Louk: the book, says Maher, is for ″the protests I saw from my window, the coffeehouses filled with drunks, suspicious encounters in the square at four in the morning, people and their children awake at all hours, ambling along the sidewalk in front of the market, the annoying woman next door″

This section of the book reads more like a collection of noir prose poems than a story. From inside the apartment at Bab El Louk, we hear, ″you excel at the art of snooping.″ People come and go, but we have almost not connection or community or action.

Inside, the apartment will not get clean, no matter how much it′s scrubbed. And outside, ″the crevices of the city are lonely and forsaken, like a deserted crime scene.″ The narrator adopts two cats, but there′s no connection here, either.

They just ″follow/ you/ silently/ from place/ to place, occasionally ex/changing words. You swear they′re/ eavesdropping on/ your phone calls, whispering/ perniciously;/ they size up/ your visitors and/ judge/ your/ every/ move.″

These short sentences don′t appear on the page as a block. Instead, they′re arranged in a cat-shaped poem, sneaking around after the reader. Here as elsewhere, the book doesn′t focus on plot, but on atmosphere. And what we learn about Bab El Louk is always partial, distant, askance.

On the morning of presidential elections, we hear slogans coming from cars marked ″government″. Black-and-green text bursts out of one car′s megaphones, repeating, ″We chose him! We chose him! Day after day, our hearts are with him.″ The words shoot out from the megaphones, spilling off the page. The reader and narrator share a sense of confusion about the slogan′s meaning. ″Even so, you′ll sing snippets of the song, in tune with the departing cars as they cut across the square.″

In the book′s final section, a landlord leads a hardboiled Egyptian detective to break the lock and enter the property at 38 Falaki Street. The detective and a phalanx of officers enter the apartment and find a body on the floor by the bed, ″a look of terror on its face.″ In Lissie Jaquette′s deft translation, the corpse no longer has personhood, but is an ″it″. The detective announces they have reason to suspect foul play.

The reader again looks down from above, on a narrow alley where neighbours have gathered. We see the tops of their heads as they gossip about the murdered man: ″Not to speak ill of the dead…but he never gave a damn about anyone.″ 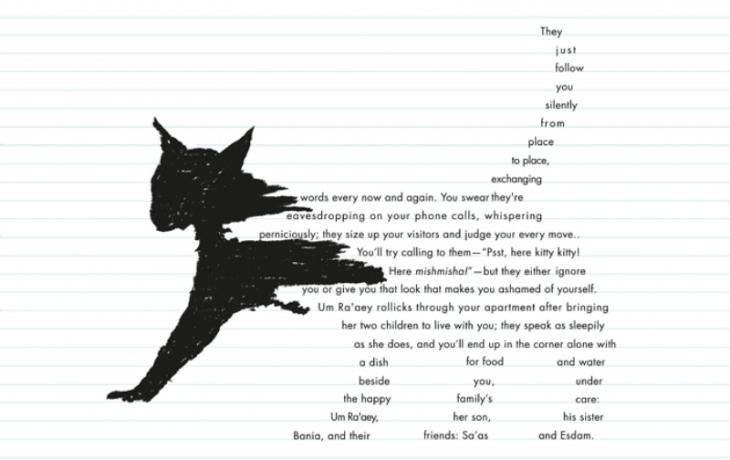 Partial, distant, askance: ″the first section of the book reads more like a collection of noir prose poems than a story. From inside the apartment at Bab El Louk, we hear, ′you excel at the art of snooping′. People come and go, but we have almost not connection or community or action,″ writes Lynx Qualey

The book shifts tone one final time, ending with a brief poetic note from the author, Donia Maher, as she dedicates the book to her neighbours in Bab El Louk. The book, she says, is for ″the protests I saw from my window, the coffeehouses filled with drunks, suspicious encounters in the square at four in the morning, people and their children awake at all hours, ambling along the sidewalk in front of the market, the annoying woman next door,″ as well as other sounds and sights around her apartment.

Those hoping for news from Tahrir or a story with a clear beginning, middle and end will be disappointed. But those willing to unshackle themselves from the expectations of story and immerse themselves in a collaborative portrait of downtown Cairo will be greatly rewarded. Indeed, much of what′s exciting about this project is its collaborative aspects. In the book′s brief eighty-some pages, ″The Apartment in Bab El Louk″ includes the writing of Donia Maher, the illustrations of prominent artist Ganzeer and the art of political cartoonist Ahmed Nady. The English also makes room for one more participant: gifted translator Elisabeth Jaquette.

This book, which won the Kahil Award for Best Graphic Novel in 2016, appears in English the same month as Ahmed Naji and Ayman Zorkany′s powerful graphic-novel hybrid ″Using Life″. Both give English readers a taste of the exciting energy of Egypt′s burgeoning, collaborative graphic-novel scene.

"The people aren’t ready for democracy" has been the constitutional basis for Arab tyranny, its favourite slogan and its sacred narrative for more than a century. Yet, asks Khaled ... END_OF_DOCUMENT_TOKEN_TO_BE_REPLACED

A new global database shows a significant gap in reported COVID-related deaths, suggesting the actual worldwide death toll is short by at least 1 million. That's due in part to ... END_OF_DOCUMENT_TOKEN_TO_BE_REPLACED

Two decades after the attacks of 11 September 2001, the West faces the shattered debris of its failure – not only in Afghanistan, but also in Iraq, Syria, Libya and Yemen. What ... END_OF_DOCUMENT_TOKEN_TO_BE_REPLACED

The coronavirus pandemic has turned lives upside down all over the world. In the Middle Ages, however, people lived with epidemics all the time. The best and most famous ... END_OF_DOCUMENT_TOKEN_TO_BE_REPLACED

In Ancient Egypt, the pharaohs had "solar boats" built to take them into the afterlife. One of these boats was discovered in 1954. It has now been moved to the Grand Egyptian ... END_OF_DOCUMENT_TOKEN_TO_BE_REPLACED

Attracting little attention from the world at large, Egypt's military regime has been mercilessly going after dissidents. Now, the first executions of prominent members of the ... END_OF_DOCUMENT_TOKEN_TO_BE_REPLACED
Author:
Marcia Lynx Qualey
Date:
Mail:
Send via mail

END_OF_DOCUMENT_TOKEN_TO_BE_REPLACED
Social media
and networks
Subscribe to our
newsletter