The Prophet and His Flamboyant Creator

Alexandre Najjar has written an entertaining and informative biography of Lebanese-American cult author Khalil Gibran. A review by Andreas Pflitsch

​​Sometimes artists are no match for their own admirers and, as time goes by, the public becomes the leading authority on their works, not the creators themselves. This is what happened to the Lebanese painter and writer Khalil Gibran (1883-1931) who, even while he was still alive, was often mistaken for the hero of his book The Prophet, published in 1923 – a collection of 26 poetic essays that even today is by far and away the best-selling work ever written by an Arab author.

As a result, today his books are often relegated to the corner reserved for esoteric and spiritual texts, instead of assuming their rightful place in the fiction section of book shops.

Admittedly, Gibran was partly to blame for this development. In 1895 he emigrated with his family from Lebanon to the USA where he was quickly embraced by Boston's artistic circles. Many fell for the "beautiful Syrian boy with long black hair and a sad look in his eye," as a contemporary described him.

Gibran quickly learned that his Middle Eastern origins automatically made him into something of a flamboyant character. The aspiring young artist used this special attraction to flee the constraints of the poor immigrant neighborhood of Boston's South End and, in the end, he obligingly accepted his delegated role as the mystic sage from the East.

Even after his death, the air of mystery surrounding him continued to grow. Barbara Young, his secretary and confidante during the final years of his life, wrote This Man from Lebanon, a virtually hagiographic book that added to the legend.

Writers like Khalil Hawi, who made a detailed, critical and serious analysis of his literature, and Jean-Pierre Dahdah, who produced a well-researched biography, may ring clear as reassuring voices of reason amid the chorus of enthusiasts singing his posthumous praises, yet they barely made a dent in the myth surrounding Gibran.

Enter Alexandre Najjar, born in 1967, an extremely prolific Lebanese author of entertaining historical novels. Readers who are expecting a matter-of-fact tone in keeping with modern biographical works will be promptly disappointed. Like most of his predecessors, Najjar begins his story by attempting to describe the breathtaking landscape of Gibran's homeland – and fails miserably:

"In the eastern Mediterranean, in northern Lebanon, where three continents and three religions meet, lies Bécharré. Thick mist rises from the valley like incense from a pot. It sweeps up over the rocks to the sounds of a nay played by a lonely shepherd as he wanders the pastures." 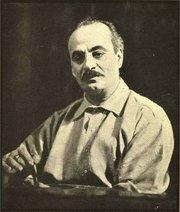 A life torn between America, Paris and Lebanon: Khalil Gibran

​​Irritated readers could well be excused for setting the book aside after reading such dubious prose, but they would be missing out on a work that, on the whole, is highly entertaining and informative.

Once you have become accustomed to Najjar's writing, which is tedious enough in his novels, and imitates the prose of the 19th century with a style that waivers somewhere between patriarchal and schoolmarmish, and have overlooked the fact that with his naive approach to narration he describes things that a biographer could not possibly know, you are treated to the wonderfully tragic tale of an artist living in America, Paris and Lebanon.

There is nothing boring about this story as it describes the atmosphere in Boston and Paris at the turn of the century, Gibran's difficult family situation, his collaboration with other Arab writers in New York, how his works were received by the Arab world, and his political views following the collapse of the Ottoman Empire.

Gibran as an author and a painter

Najjar should also be commended for looking beyond Gibran the author. In addition to interpreting his syncretic religiousness and the influences of European authors like Blake, Renan and Nietzsche, he gives due attention to Gibran's paintings and drawings.

However, the biographer is obviously more interested in Gibran's interpersonal relationships than his philosophical background. Without resorting to sensationalism or mystification, he openly addresses aspects of the artist's relationships to women that other authors tend to omit out of embarrassment.

Insights into his life and work

By extensively citing Gibran's correspondence and dealing with his shortcomings, like his complete inability to accept criticism, in the final analysis, despite the adulation, which even an author like Najjar simply cannot avoid, this biography gives us more insights into Gibran than all previous works.

In summary, the book deserves mixed reviews. While Alexandre Najjar's work meets neither the literary standards of an essay nor the methodical criteria of a biography, it is a highly successful introduction to the life and work of Khalil Gibran, and thus a genuine alternative to Jean-Pierre Dahdah's 560-page biography with its overload of tiring details.

Rashid al-Daif
Writing to Combat Memory Loss
Despite his literary transformation, the Lebanese writer Rashid al-Daif can still see the horrors of his country's civil war clearly in his mind's eye. Katja Brinkmann reports on the life and work of this author

Mahmoud Darwish
Palestine's Poetic Voice
Mahmoud Darwish, critically acclaimed as one of the most important poets of the Arabic language, is often referred to as "the voice of the Palestinian people". Now, two new publications provide an illuminating look at his life and work. By Martina Sabra

END_OF_DOCUMENT_TOKEN_TO_BE_REPLACED
Social media
and networks
Subscribe to our
newsletter