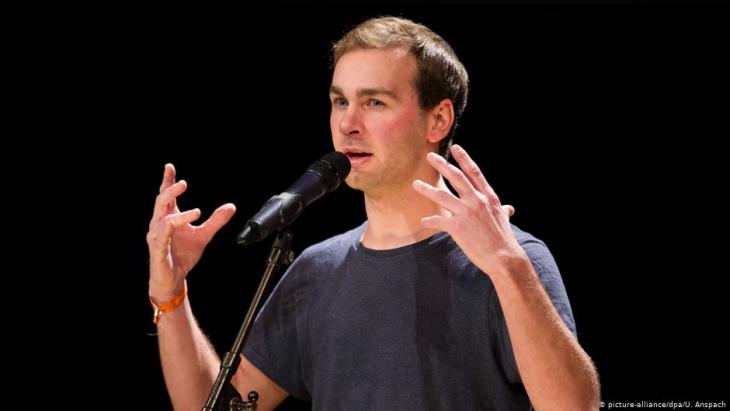 Originally published in German in 2016 at the height of the refugee crisis, Pierre Jarawanʹs debut novel deftly captures the multi-layered existence of those who are forced to leave their homeland. Newly available in English, "The Storyteller" is a moving tale of the quest for personal identity. Richard Marcus read the book

The story is told from the perspective of Samir, the child of two refugees from Lebanon, Brahim and Rana el-Hourani. Fleeing the horrors of Lebanon's civil war in the 1980s, the couple are granted asylum in Germany. Samir is born in Europe and nurtured on his fatherʹs bedtime stories from an early age. Tales of the hero Abu Youssef, for instance, who – accompanied by his friend Amir the talking camel – is the protagonist of a series of treasure-seeking adventures all over the Middle East, with a special focus on the magical kingdom of Lebanon.

It's obvious that the son worships the father and, by extension, the mythical version of Lebanon the parent brings to life in his stories. Unfortunately worship, even of a father, can lead to disappointment and scarring. For Samir it begins innocuously enough with a slideshow of his parent's wedding. Finally what was previously only an imagined world attains a degree of reality.

However, this reality features some jarring images: some people at the wedding are in uniform and carrying weapons. The insignia is that of a cedar tree in a red circle. One of the photos is of Samir's father standing with Bachir Gemayel, leader of the Christian Lebanese Forces militia.

During the 1980s and 90s Lebanon was a war zone. Palestinian fighters used it as a staging ground for attacks on Israel and in response Israel would either routinely invade or shell Palestinian refugee camps. During the civil war Israel helped the Christian militias; the Syrians helped themselves to whatever they could get their hands on; and much of the Lebanese population – Muslim and Christian – was caught in between. 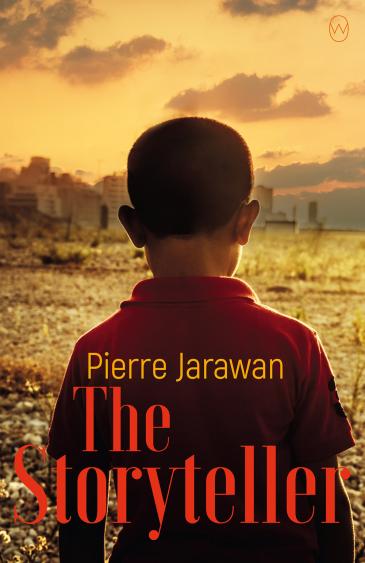 A compelling read: "'The Storyteller' by Pierre Jarawan is one of those rare books that takes you on both the internal and external journeys of a character. We not only see how far Samir travels emotionally, but follow him on the geographic journey required for him to grow up and accept himself," writes Marcus

Haunted by the past

Soon after the re-discovery of these slides Samir's dad undergoes a mysterious transformation. He becomes distant with both his wife and his two children. Then he starts receiving mysterious phone calls from Lebanon – calls which he claims are from his sick mother. However he continues to grow more distant until, finally, he simply disappears.

Samir is devastated. As a child who worshipped his father, he can't believe the happy storytelling man who has been such an integral part of his life has just vanished. When his mother dies and his sister is sent into foster care just before he's set to finish school, he shuts down.

However, his obsession with his father persists. In spite of hearing nothing from the man for decades, the latter continues to cast a shadow over his life. Samir blames himself for his father's leaving and his mother's subsequent death (even though she had an undetected brain aneurism) and his life is stunted by that baggage.

Finally his lover convinces him to travel to Lebanon and see if he can search out his father – or at least figure out his very murky history. Why was he photographed with a militia leader? Was there a hidden history of atrocity in his father's past? Or was there another, more complex explanation for his fatherʹs precipitous disappearance?

In depicting both Samir's life with his father and his relentless search for answers, Jarawan takes us on an epic journey spanning two countries and across decades. Along with Samir we gradually develop a real picture of his father, finally finding out the secret that was eating away at him.

In the process of telling this family's story Jarawan brings to life the experiences of being a refugee newly arrived in Germany, as seen through Samir's parentsʹ eyes. He also tackles the more difficult task of showing the impact a parent's sentimental attachment to life in the "old country" can have on a child.

In Samir's case, his romantic image of his father is irrevocably interwoven with the magical tales he told him about Lebanon. When his search for his father eventually takes him to Lebanon, he is confronted with the truth, which inevitably has little in common with the Lebanon he has imagined. After all, modern day Lebanon still hasn't recovered, neither from the civil war in the 1980s nor from the subsequent occupation by foreign powers, especially Syria.

Where faiths used to intermingle, Christians and Muslims living as neighbours, the civil war has estranged former friends and – despite government attempts to encourage resettlement – segregated whole neighbourhoods. Jarawan's description of life in Lebanon makes you wonder whether an entire country can suffer PTSD (post-traumatic stress disorder). For those who remember the past, trauma seems to lie just below the surface.

However, it is the people who reside in the environments Jarawan has created who make the novel really compelling. Samir is an easy character to identify with; his situation is depicted with unerring accuracy. We buy into each of his joys and torments, becoming so caught up in his journey that we ultimately end up sharing his doubts and fears about what he will eventually find out.

In fact, while we sometimes might get impatient with Samir, and do not quite understand why he's so obsessed with a man who deserted him when he was a child, we really do end up hoping he finds what he's looking for. Jarawan does such an excellent job of bringing us into Samir's life, we almost feel we're living it alongside him.

The Storyteller by Pierre Jarawan is one of those rare books that takes you on both the internal and external journeys of a character. We not only see how far Samir travels emotionally, but follow him on the geographic journey required for him to grow up and accept himself. A brilliant work for our times.

Last week Egypt's police stepped up an "unprecedented escalation" on activists by arresting a leading rights group director. Advocates on the Nile have long weathered a crackdown ... END_OF_DOCUMENT_TOKEN_TO_BE_REPLACED

What drives young men into the arms of Islamist extremists – and how can they be re-integrated into society? Five years after the deadly attacks in Paris, urgent questions remain ... END_OF_DOCUMENT_TOKEN_TO_BE_REPLACED

Austria's chancellor is seeking to criminalise "political Islam". The move would put non-violent, non-radical Muslims under blanket suspicion and is hardly helpful in the fight ... END_OF_DOCUMENT_TOKEN_TO_BE_REPLACED

Rather than suspecting Muslims in general, we need to co-operate more with Islamic scholars, Muslim congregations and associations, writes Muhammad Sameer Murtaza in his ... END_OF_DOCUMENT_TOKEN_TO_BE_REPLACED

Berlin's "House of One" project, instigated by Jews, Christians and Muslims, will finally begin to take physical shape in early 2021, following a lengthy period of preparation. ... END_OF_DOCUMENT_TOKEN_TO_BE_REPLACED

Organised by interfaith NGO Religions for Peace, an international conference in Lindau on Lake Constance is dealing with the peace-building role of women inspired by the faith of ... END_OF_DOCUMENT_TOKEN_TO_BE_REPLACED
Author:
Richard Marcus
Date:
Mail:
Send via mail

END_OF_DOCUMENT_TOKEN_TO_BE_REPLACED
Social media
and networks
Subscribe to our
newsletter