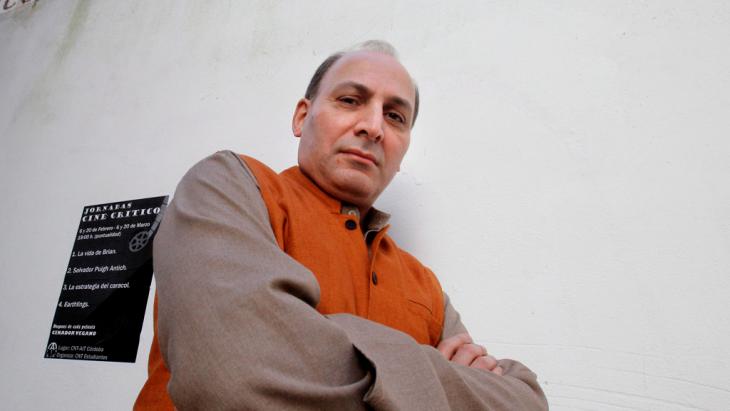 "The last stop before hell"

In May 2006, the leading Iranian intellectual and philosopher Ramin Jahanbegloo was arrested at Tehran Airport and accused of spying and trying to undermine the government in Iran. Following an international campaign, he was released in August of the same year. After his release, he wrote a book about his experiences. By Fabrizio Petri

It is always exciting to discover new qualities in people one thinks one knows well. This applies to the Iranian philosopher Ramin Jahanbegloo, who with his haunting autobiography on the period he spent in prison in Tehran, "Time Will Say Nothing", reveals to us a literary vein of rare intensity.

While many of us have known him for some time thanks to his enlightening essays on non-violence and his brilliant books of conversations with eminent personalities of our time, among which the one with the liberal British philosopher Isaiah Berlin perhaps remains unequalled, with this new book Jahanbegloo surprises us with his ability to narrate with great naturalness and narrative sagacity a period of his life that was among the most dramatic one can imagine.

The title itself, a verse by the poet W. H. Auden, evokes dimensions that transcend the ordinary, introducing us to a realm in which the unspeakable, the absurd, and also the inevitable crudeness of reality mingle and merge with no safety net. At the same time, however, the title subtly refers to an inner profoundness and intensity, and it was to this that the author hung on in order to survive the terrifying experience of prison. It is in this dual manner that Jahanbegloo addresses his narration of a world that suddenly collapses around him in April 2006, when he was taken from Tehran Airport and locked up in Section 209 – "the last stop before hell" – of Evin Prison, the Iranian political police's infamous detainment centre. 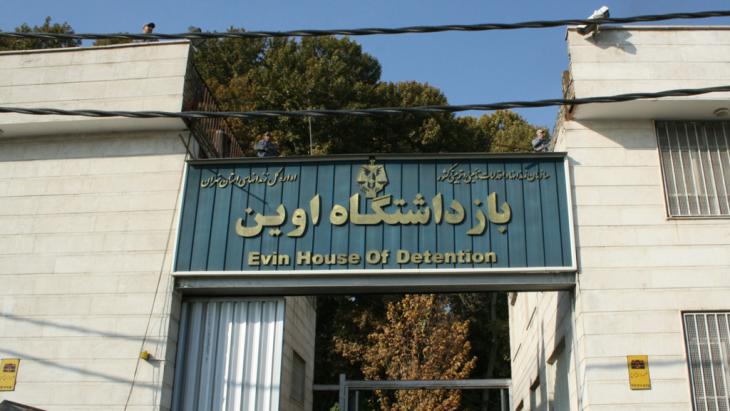 Ramin Jahanbegloo was arrested at Tehran Airport while waiting to catch a flight in April 2006. He was taken to Iran's notorious Evin Prison in north-western Tehran where he was locked up in Section 209

It was here that time became suspended for Jahanbegloo, and, thanks to his significant gift as a storyteller, it is suspended for readers too as they find themselves projected into a terrifying nightmare. Locked up without knowing why. Accused of something he never even thought of doing. Sentenced only because what he had written was perceived as a threat to the system.

Kafkaesque angst dominates the beginning of the story. However, while there is no doubt whatsoever that in certain circumstances one is led by one's subconscious, the beginning of "Time Will Say Nothing" provides us with a complete feeling of certainty. The inner element is the only thing one can hang on to in life's incontrollable flow. It is here that the dual element evoked by the title is fully revealed.

It is of course true that Jahanbegloo had a family supporting him – the book itself is dedicated to his mother – a family that we learn to know and appreciate. He also has influential friends, first among them the Italian diplomat Roberto Toscano, at the time the Italian Ambassador to Iran, friends who spark an extraordinary international mobilisation that will in the end bear fruit.

But the most significant factor that emerges from the very beginning of the story is the importance of the inner dimension. That is the pillar. It allows one to understand Jahanbelgoo, who sets us free and makes freedom too worthy of being experienced. And so, being there with him when, with a hood over his head, he faces, with no news of his loved ones, not even of his wife, the terrible and surreal interrogations, one never loses oneself but rather discovers oneself again.

If in fact there is an aspect in which the reader of this beautiful book can seize a breath of brotherhood and closeness with the author, it is in ascertaining through his experience that, when one is suddenly alone in fighting one's battles, it is exactly under these circumstances that universal values emerge in us, relinking us to the world, and without which it would probably be impossible to describe ourselves as human beings. It is perhaps in knowing how to explore with great mastery this factor that there is the most original aspect of how Jahanbegloo narrates his imprisonment.

Pain as a rite of passage 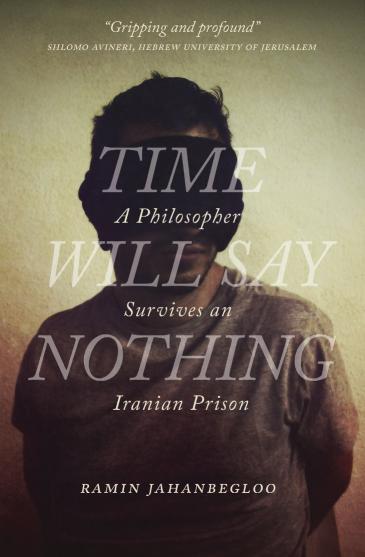 According to Fabrizio Petri, Jahanbegloo's personal style makes reading the book easy. Moreover, he says, the author never gives in to sentimentalism, is never banal, and never tires his readers

It is a tale that assumed a Dante-like dimension. It is very moving to see how, when faced with a loss of all certainties, with the bloated brutality of his jailers, Jahanbegloo manages to observe all this pain as a rite of passage. In a concise critical dialogue with his country's cultural and religious traditions and with his experience as an international philosopher, Jahanbegloo unravels his thoughts in a tale that is historical and personal, philosophical and ethical.

The immense love that, in spite of everything, he still feels for his country, the power of the ideals passed down to him by both his mother and his father, all of his restless intellectual moving between the West and the East, are elements that Jahanbegloo keeps together without ever giving in to sentimentalism, without ever being banal or ever tiring the reader.

On the contrary, his personal style, studded with both vast cultural references, ranging from literature to films, from poetry to philosophy in the Eastern and Western traditions, as well as his encounters with some of the most important personalities of our times – from the Dalai Lama to Vaclav Havel –, analysing historical and contemporary issues, to what guarantees continuity to the story and makes reading easy. His being in prison, finding he has lost his way, over time is transformed as the story unravels, becoming an opportunity to both outline a compelling historical, cultural and political fresco of Iran, and to bring together all the personal and intellectual paths of his life.

This is a story that reaches its natural summit with his release in August that same year. It is here that Jahanbegloo surprises us in a different way, with his at times disarming honesty and by simply narrating events rather than attempting to persuade. He writes of his tiredness, his desire to live, his ethics, his search for a middle way. The contradictions filling these pages, among the most haunting in the book, are not easy to follow because, faced with the amazing international mobilisation of a petition signed by over four hundred intellectuals from Noam Chomsky to Amartya Sen, support from the European Union and many other nations, Jahanbegloo indulges the request for a "confession" the regime demands so as not to lose face.

These are not easy pages because the porosity of Evin Prison, that dimension between the unmentionable and crudeness, could not but also affect the author. Here Jahanbegloo's humanity is transformed, and the heroic aspects one had been inclined to see in the narration give way to a different kind of introspection, in which life's elementary factors gain the upper hand.

What emerges is the sense of an insoluble moral tension that installs itself in the author's soul and, not without an unusual degree of honesty, he admits that a form of depression accompanies him in his later life in Canada. But if perhaps this is the price one must pay when life's circumstances lead a human being to face such difficult tests, it is certain that this lucid analysis of his liberation returns to us a fully humanised Jahanbelgoo. In this analysis, the reader will discover the most intense and constructive moments of a book that never ceases to make us reflect on the complexity and unavoidability of our ethical choices. Because, if "Time Will Say Nothing", we can, however, say a great deal to our times.

The Prophet Muhammad never executed anyone for apostasy, nor encouraged his followers to do so. Nor is criminalising sacrilege based on Islam’s main sacred text, the Koran. In ... END_OF_DOCUMENT_TOKEN_TO_BE_REPLACED

Surging coronavirus cases in many parts of the world have overshadowed the start of this year's Muslim holy month of Ramadan, with festivities once again curtailed by contagion ... END_OF_DOCUMENT_TOKEN_TO_BE_REPLACED

German Middle East analyst Guido Steinberg and television journalist Ulrich Tilgner have both published new books on the conflicts in the Middle East. Their analyses and their ... END_OF_DOCUMENT_TOKEN_TO_BE_REPLACED

On 27 March, Iran and China signed a 25-year accord intended to foster "strategic co-operation". Despite ongoing uncertainty over the deal's actual scope, content and chances of ... END_OF_DOCUMENT_TOKEN_TO_BE_REPLACED

Researchers agree that climate change alone cannot be blamed for the outbreak of war in Syria in 2011. However, neither can it be ignored as a reason this once blossoming country ... END_OF_DOCUMENT_TOKEN_TO_BE_REPLACED

END_OF_DOCUMENT_TOKEN_TO_BE_REPLACED
Social media
and networks
Subscribe to our
newsletter