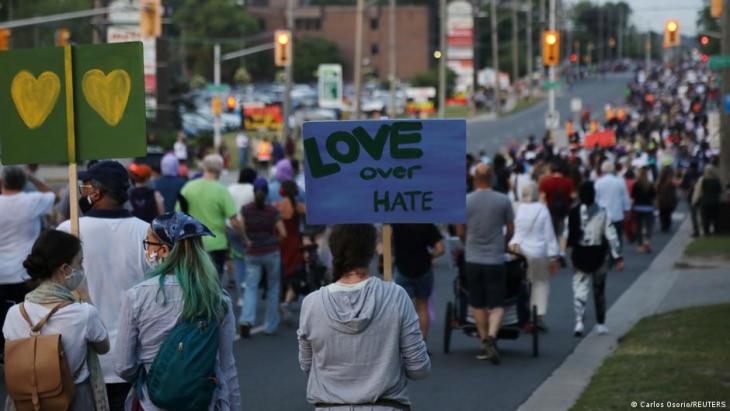 A 20-year-old murder suspect in Canada now faces terrorism charges after he was accused of mowing down a Muslim family with a truck earlier this month, prosecutors said Monday.

The attack on a family of Pakistani background in the city of London, Ontario, killed a 46-year-old man, his 44-year-old wife, their 15-year-old daughter and a 74-year-old grandmother while they were on an evening walk on 6 June. The couple's nine-year-old son survived the attack, although he was seriously injured.

What did Canadian authorities say about the charges?

"The federal and provincial attorneys general provided their consent to commence terrorism proceedings, alleging that the murders and the attempted murder also constitute terrorist activity," the Royal Canadian Mounted Police said about the charges.

Authorities say the alleged perpetrator, Nathaniel V., carried out the murders on purpose and was targeting Muslims.

Nathaniel V. faces four counts of first-degree murder in addition to the terrorism charges. The perpetrator also faces one count of attempted murder.

The suspect has no criminal background or known ties to extremist groups. He told the court on Monday that he does not yet have an attorney. He is slated to appear in court again on 21 June.

How have Canadian leaders responded to the attack?

Canadian Prime Minister Justin Trudeau told the House of Commons recently that the murders were a "terrorist attack, motivated by hatred, in the heart of one of our communities."

"It is really important for us to name it as an act of terror... and it is important for us to identify the terrible threat that White supremacism poses to Canada and to Canadians," Deputy Prime Minister Chrystia Freeland said in response to the new terrorism charges.

The National Council of Canadian Muslims (NCCM) advocacy group called the new charges an "important development in the case."

"We will never be intimidated by acts of terror and Islamophobia," the NCCM added.

Canada has experienced anti-Muslim violence in the past. A 27-year-old man opened fire on worshippers in a mosque in Quebec City in 2017, killing six people and leaving five others seriously injured.    (Reuters, AFP)

END_OF_DOCUMENT_TOKEN_TO_BE_REPLACED
Social media
and networks
Subscribe to our
newsletter