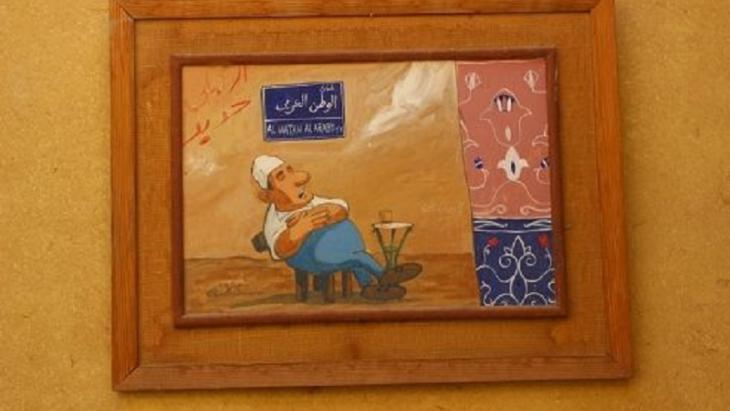 "Provisions" for travellers to Tunis Village

A cartoon museum in rural Egypt preserves a cultural heritage and opens up new prospects for the villagers. By Sameh Fayez

"Zad al-Mosafer" (provisions for the journey) says the sign on a low wall at the entrance to Tunis Village, in Egypt's Faiyum Governorate. From there you walk through farmland for a few minutes before reaching the "Zad al-Mosafer" Hotel, a building in a rural style with domed clay roofs that hosts visitors to the village.

If you walk on for a few more minutes through a narrow, leafy passageway, you reach a large open space, in the middle of which are an art centre and a cartoon museum founded by the Egyptian artist Mohamed Abla. Both of these are also built in the style of rural clay houses, but they are distinguished by an artistic aesthetic previously unknown in houses of this type.

In the art centre, Abla is sitting in front of a canvas, drawing with a pen. Then he turns to me and explains: "We're not going to spoon-feed culture to the villagers; we just put a canvas in front of them, a book or a beautiful sight that they haven't been offered before. In the long term, that is certain to have an influence on their souls. We create a new reality for them, and then the choice is theirs."

In Egypt, cultural activities are concentrated in the most important centres and the most important cities in the provinces, but are completely absent from the country's villages, which number more than 4,000. Most of these villages also lack vital services like electricity, running water and healthcare.

In light of this situation, Abla decided to move to a village with his paintbrush and canvas, to create a kind of fair distribution of culture and help people to understand that change will not happen without art and education. 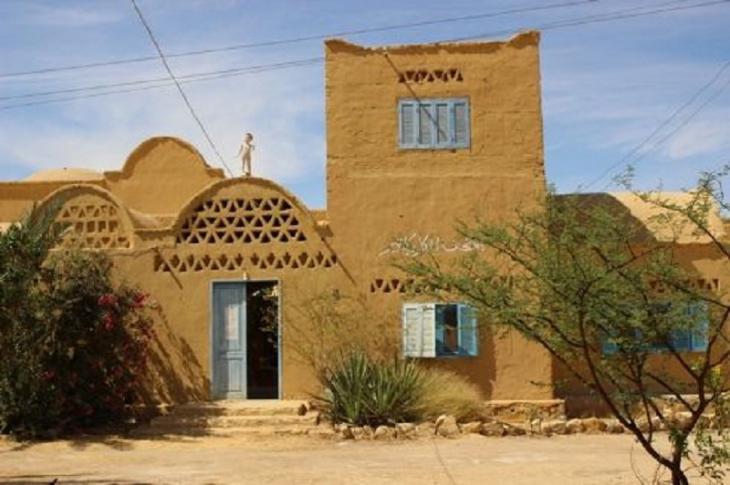 The only cartoon museum in Africa is built in the style of rural clay houses. Researchers from Switzerland and Germany come to the village of Tunis and its museum to write theses on the history of cartoons in the Middle East

He explains: "I started building my first art project in the village in 2005, and in 2009 I founded the cartoon museum – now 10 years have passed and I'm one of the villagers. But first and foremost we have to recognise that change through culture only works in the long term, we only see its influence after years, and maybe it's only later generations who feel its effects."

In 1977, Mohamed Abla began a degree in photography in the Faculty of Fine Arts at the University of Alexandria, and in 1981 he went on to study sculpture at the Arts and Industries College in Zurich, Switzerland. In 1990 he spent six months as the director of the department of visual arts at Cairo Opera House, and as a guest lecturer in art at Sweden's Orebro School.

He has lived in Spain, Germany, Austria and Switzerland and has exhibited his works in Germany, Italy, the Netherlands and Sweden. But finally he decided to live in a remote village in the western part of Faiyum Governorate, to give artists a real role in changing the society they live in.

Tunis Village, which the artists have transformed into a tourist attraction and a centre for crafts, and whose inhabitants excel at the production of ceramics, receives no state support.

Abla says: "It is remarkable that in 40 years, no Egyptian culture minister has thought to visit the village. We received promises of funding for these cultural projects from one of the ministers, which would actually be the natural job of his ministry, but they remain nothing but promises."

Believe in your abilities

Abla puts down his brush and continues: "The museum greets its visitors with cartoons from newspapers and magazines of the 1920s. The oldest drawings come from the year 1927. Most of the pictures are originals, apart from a few taken from newspapers and magazines. And most of these cartoons are among the oldest pictures in the museum's collection. These drawings appeared in newspapers that are no longer produced, like Al-Mitraqa (the hammer), Al-Fukaha (the humour), Al-Kashkul (the mixture) and in some journalistic publications that do still exist today, such as the magazine Rose al-Youssef, and Sabah al-Khair (Good Morning)."

Abla continues: "Although I have put all my savings into the cultural centre and the cartoon museum, the culture ministry hasn't recognised the place, or its significance as the only cartoon museum in Africa. All the same, I feel at peace. I aimed to preserve the cartoons that are part of our cultural heritage, and in founding the museum, that's what I have achieved. To understand the museum's significance, you have to know that 'Dar al-Hilal’ (half-moon house), an organisation that collects the most important magazines for cartoons in Egypt, has lost its entire archive. The magazine Al-Ahram doesn't own the originals of Salah Jaheen's drawings. So while the state, represented by its cultural organisations, has ignored this museum, researchers from Switzerland and Germany have come to the village to write their masters and doctoral theses on the history of cartoons in the Middle East." 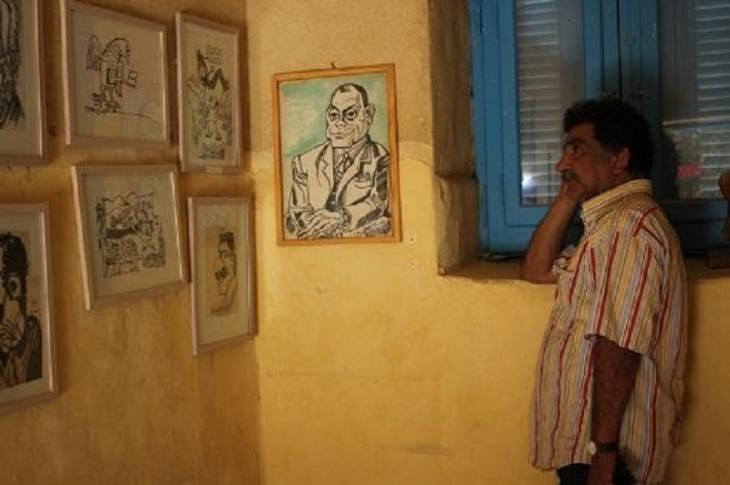 The Egyptian artist and founder of the cartoon museum, Mohamed Abla: He is on a mission to create what could be described as a fair distribution of culture. School groups from all over Faiyum visit the museum on a regular basis

In the evening a young man sits outside the museum, which is situated in the middle of the fields of Tunis. He starts playing an oud and singing. Two children from the village stand nearby; they first listen to the music and then accompany me on my tour of the museum. The public library on the top floor has books in numerous languages, which are always available to readers.

When I ask about visitors to the museum, its owner replies: "The museum is a frequent destination for school trips from all the districts of Faiyum, and on Fridays and Saturdays in particular (the Egyptian weekend) we get visitors from Cairo and various other provinces. If you take a walk around the village now, you can clearly see how much art and culture have changed things for the better for people here. Most of them now work in ceramic production, and visitors from all over the world come here to buy their products. They take part in international trade fairs to market their products. That has also had an effect on the villagers on a social level."

I came to Tunis in a pick-up truck, with passengers sitting in the back on the truck bed. Although this vehicle isn't meant for transporting passengers and despite its risks, it is the only means of transport between the villages of Faiyum. During the ride I chatted to the driver.

Although he was taking me from the city of Abshuawi at the centre of Faiyum Governorate to Tunis, 50 kilometres away, he remembers the names of the artists who live in Tunis as though they were his neighbours: "Abdu Habib, Mohamed Abla, Evelyne."

He loses himself in his memories of Tunis: "These artists have an important role in improving the situation for villagers, in particular the Swiss lady, Evelyne, who moved to the village decades ago. Having said that, it's only the villagers in Tunis who feel this change. In the surrounding area there are a lot of other villages that need the same attention."

Sameh Fayez is an Egyptian journalist and novelist

Home
Print
Newsletter
More on this topic
Caricaturists in Iraq: Walking a satirical tightrope″Art of Freedom. Freedom of Art″ in Tunisia: Carving out a niche between terror and bureaucracyExhibition of IS cartoons in Tehran: Iran battles its enemies with cartoons
Related Topics
Art, Cartoons, Performing arts, Satire, Visual arts
All Topics

As the photo of Fairouz talking to French President Emmanuel Macron spread around the world, many asked if Arabs today had any contemporary stars of Fairouz's standing. In this ... END_OF_DOCUMENT_TOKEN_TO_BE_REPLACED

Saudi Arabia and its allies have agreed to set aside their differences with Qatar at a summit meeting of the Gulf Cooperation Council. The restoration of diplomatic relations ... END_OF_DOCUMENT_TOKEN_TO_BE_REPLACED

Many in the West equate Middle Eastern music with the folklore of "A Thousand and One Nights". Tayfun Guttstadt demonstrates just how erroneous this is END_OF_DOCUMENT_TOKEN_TO_BE_REPLACED

Ten years after the start of the Arabellion in North Africa and the Middle East, many view the movement as a failure. But rather than being over, it has now entered a more mature ... END_OF_DOCUMENT_TOKEN_TO_BE_REPLACED

END_OF_DOCUMENT_TOKEN_TO_BE_REPLACED
Social media
and networks
Subscribe to our
newsletter