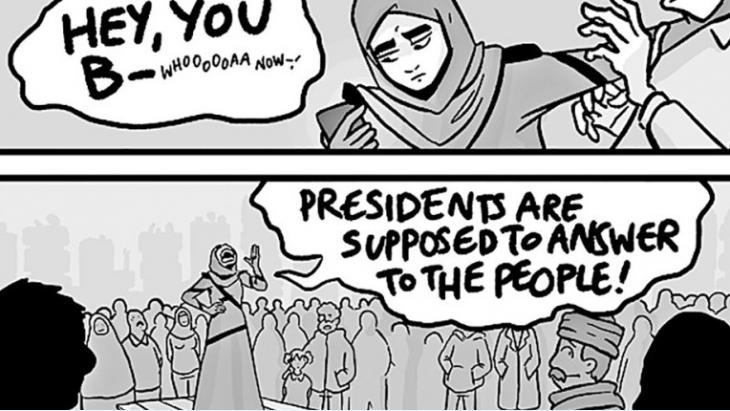 Cartoonists in the Arab world
Children of the revolution

How are comic book artists in the Arab world responding to the political situation in the region? Lena Bopp talks to illustrators Lina Ghaibeh and George Khoudry about young artists' collectives and feminist superheroes

Lina Ghaibeh is a comic book artist and special professor at the Institute for Graphic Design at the American University of Beirut, where she leads the Mu’taz and Rada Sawwaf Arabic Comic Initiative, which focuses on research into Arab comics and awards the annual Mahmoud Kahil Award for the best Arab comic.

George Khoury was one of the first people to publish an Arab comic for adults in the early 80s, releasing Carnaval under his pen name JAD. In setting up JAD Workshops, he established the first collective for comics artists in Lebanon; for many years, he also headed up a political animated TV series and taught graphic design at the Lebanese American University.

Comics for adults are a relatively new genre in the Arab world, experiencing their breakthrough around the time of the Arab Spring in 2011. Why then?

Lina Ghaibeh: Comics are a youthful, anti-establishment medium that spread because protestors were taking to the streets and forms of expression like graffiti and street art, themselves connected to the streets, were experiencing a boom. There were a few comics around beforehand – personal stories or accounts of war, such as those from Lebanon by Mazen Kerbaj and Lena Merhej. But the uprisings drove the genre forward as various artists joined forces, formed collectives and began publishing their own fanzines. 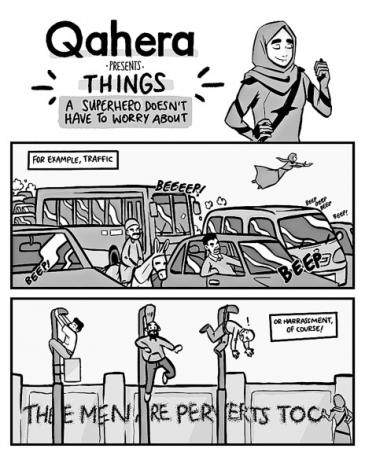 Muslim, female and a superhero: created by Deena Mohamed during the uprisings in 2011, Qahera is a Muslim woman, whose veil makes her look like a ninja. Qahera protects women who are harassed on the street and raises some interesting topics for discussion. She blames some women for dressing too revealingly, yet she also takes on Western women keen to try to ‘save’ their Arab sisters. She laughs at the suggestion that Muslim women who wear the hijab are necessarily victims who need saving

There’s TokTok in Egypt, Lab619 in Tunisia, Skefkef in Morocco, Samandal in Lebanon, and Fanzine in Jordan. Why is the collective currently so popular among artists creating Arab comics?

George Khoury: Because it’s the only way of getting things published. There are now two presses publishing comics in Egypt, but when the uprisings began, there wasn’t a single one. And at the time, publishing in its classic form was already under huge pressure and restricted by what audiences in the Gulf liked to read...

. . . because the Gulf states are the publishing houses’ most important market.

Ghaibeh: Yes. Publishing houses didn’t want to risk trying anything new. So young people got together and arranged their own financing – mostly through European foundations and cultural institutions – to publish their own magazines. Cultural associations in Lebanon had the advantage of being allowed to publish without having to submit books to censors beforehand. But things were different in Egypt.

Magdy El Shafee, who published his graphic novel Metro two years before the uprising, was taken to court along with his publisher, and both were required to pay hefty fines. But that was on the eve of the revolution and the artists recognised that it was still possible for them to express themselves, that they wouldn’t be too harshly punished or find themselves in prison and subject to torture. And so, they began. The situation today is different. These days, conditions are much as they were before.

Ghaibeh: We‘re seeing another crackdown on cartoonists and artists in Egypt and other countries, some have been imprisoned and many have gone into exile. Others have not had to hide and have been able to continue working, particularly those members of TokTok because they don’t consider themselves to be political and are not especially obtrusive. They tend to publish social or sometimes humorous commentaries – nothing that could be stopped or censored.

Mr Khoury, you once wrote that these collectives brought young artists from different countries together at a time when the Arab world was witnessing ever greater division. What did you mean by that?

Khoury: Prior to the Arab Spring, the whole of the Arab world lived under the unifying ideology of pan-Arabism; we were committed to the pro-Palestinian and anti-colonialist causes. But at some point, this political line was severed. People recognised that they had their own social and economic problems and it became more important to them to have good governments, good living standards – and democracy too, of course. And so, local conditions took priority over pan-Arabist ideology.

And comics began to reflect this growing local perspective?

Ghaibeh: Comic book artists made it clear back then: we don’t want comics about revolutions, we want a revolution in comics. Local colour was important. Classical Arabic was replaced by dialects. Diversity was expressed through architecture and clothing, because everyone was drawing their own streets – full-figured Egyptian women in veils, young men in shellsuits, old wires, derelict houses. The artists didn’t try to improve the image of their home towns, they aimed to show them as they truly were. In the past, there was this collective Arab world view that never permitted them to show a specific city, pushing them to present a collective city where we all talk about a topic that binds us together: Palestine. Now it’s all about our problems in Egypt, in Tunisia, in Syria. 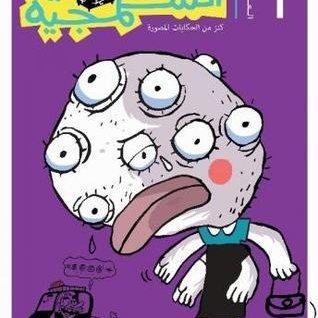 Eyecatchingly abstract: the appeal may be less mainstream, but for the women creators of "Al Shakmajiyya", social issues such as sexual harassment and domestic violence are no laughing matter

What is the Syrian collective working on?

Ghaibeh: The Comic4syria collective made special efforts to talk about the revolution in Syria, discussing the torture and brutality they were subjected to – sometimes with a touch of humour. There was a short series about a spy, but that’s the kind of thing that gets you killed in Syria, so the comics were produced anonymously and only published online. And when the war intensified, the artists stopped: they were in serious danger. Some of them were still living in Syria and even those who had left the country still had family back home. And to this day, they haven’t produced new work about their experiences. They are still afraid.

Khoury: Because the Syrian comics were provoked by the revolution, they have become visual documents of the revolt. If you want to know how Syrians were treated in prisons, just look at the comics. Artists in other countries didn’t address the specifics of their uprisings in the same way, and those that did, such as Ganzeer in Egyptian, soon left the country after receiving threats.

The new comics also deal with topics that have long been taboo in Arab societies – sexuality, religion, and social traditions. In Egypt, there was even a magazine, Al Shakmajiya, dedicated to feminism and sexual harassment. Are there differences in the way male and female comic book artists approach these themes?

Ghaibeh: The boys at TokTok once made a magazine just for women. They published comics about sexual harassment and domestic violence, among other things, supposed ‘women’s issues’. But the comics were funny, borderline sarcastic. And they were illustrated like cartoons, in black-and-white, unadorned. In Al Shakmajiya, women have created work on the same topics, but with much less humour. Their illustrations are full of colour, almost hyperrealist, but not because the women naturally draw that way, I think it was the topic that made them create that work. It hasn’t carried over to other topics.

What other issues are influencing Arab comics at the moment?

Khoury: What’s really fascinating is what’s not influencing these comics anymore. In the past, history and Arab nationalism were big themes, but young comic book artists are not as interested in these things and if they are, they’re more interested in local episodes of history: the Egyptian pharaohs, the expulsion of the Nubians from Aswan prior to the construction of the dam in the 1960s. In Morocco, some artists are working on the legacy of the North African Amazigh or Berbers.

Do local influences also appear in the imagery of contemporary comics?

Khoury: They were more prevalent in the past – take, for example, the simple line layout, the lack of perspectives, the missing details: elements that have their roots in Islamic art. Today, local influences can be seen in the colours, the light, the subjects at hand. We’ve never established our own school of comics like the Japanese with their manga, or the Americans with their superheroes.

Ghaibeh: Yes, there are. Malak was the first. The Lebanese artist Joumana Medleh designed the character online in 2006, turning it into a series and compiling her adventures in a book. Malak is a Lebanese superhero who takes her powers from Phoenician mythology and her story plays out against the backdrop of the civil war. And there’s Qahera by Deena Mohamed. Qahera is a Muslim woman, whose veil makes her look like a ninja. Deena Mohamed created Qahera during the uprisings in 2011. Qahera protects women who are harassed on the street and raises some interesting topics for discussion. Some of the women are blamed for dressing too revealingly. But she also takes on Western women who are keen to try to ‘save’ Arab women. She laughs at the suggestion that Muslim women who wear the hijab are necessarily victims who need saving.

November 2022 sees the Arab world firmly in the spotlight with the COP27 in Egypt and the FIFA World Cup in Qatar. Public trust in MENA governments is weak, thanks to their ... END_OF_DOCUMENT_TOKEN_TO_BE_REPLACED

"You are not my guide... I am the compass. Iranian women have spoken, freed themselves, and unleashed a revolution despite smelling death. They have cut their braids in anger; ... END_OF_DOCUMENT_TOKEN_TO_BE_REPLACED

In “The Wrong End of the Telescope”, Rabih Alameddine draws us away from the headlines and into the personal story of one individual. Mina is complex, compelling and very real. By ... END_OF_DOCUMENT_TOKEN_TO_BE_REPLACED

The clashes in Baghdad between supporters of Muqtada al-Sadr and pro-Iranian militias show that an intra-Shia power struggle is in full swing. An analysis from Cairo by Karim El- ... END_OF_DOCUMENT_TOKEN_TO_BE_REPLACED

END_OF_DOCUMENT_TOKEN_TO_BE_REPLACED
Social media
and networks
Subscribe to our
newsletter