Just before the opening of the Olympic Games in Beijing, two terrorist attacks shook China. The local authorities accused Muslim extremists of carrying out the bombings. Since then, the world has started taking notice of an ethnic group: the Uighurs. Albrecht Metzger has the details

Just before the opening of the Olympic Games in Beijing, two terrorist attacks shook China, killing a total of more than 20 people, mainly police officers. The Chinese authorities accused Muslim extremists of carrying out the bombings. Since then, the world has started taking notice of an ethnic group previously only familiar to specialists: the Uighurs. Albrecht Metzger has the details 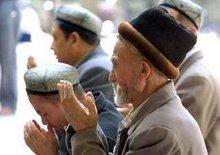 The population in the north-western Chinese region of Xinjiang is largely made up of Muslim Uighurs, who have a Turkic language and culture

​​The Uighurs are Muslims, speak a Turkic language and are also culturally distinct from the majority of the Han Chinese. But researchers or journalists wanting to find out more about them soon run up against difficulties. The subject of religious minorities in China is a controversial one, particularly when it comes to the Uighurs.

The Hamburg-based ethnologist Patricia v. Hahn knows all about this problem. Two years ago, she planned to write a PhD on the Muslim minority in the Northwest of China, but had to abandon the project as her research proved so difficult from the very outset.

"I wanted to contact an interview partner via email. I was aware that I ought to avoid words like terrorism or separatism," she explains. "So I only asked him what the Uighurs' relations with the Chinese were like." A comparatively harmless question – but she never received an answer.

It was not until she asked her contact person about personal issues that she got a response again. "The other email may well have been intercepted by the Chinese authorities," Patricia v. Hahn suspects.

The Chinese panic over Uighur separatism is related to the geographical location of Xinjiang, the area where the Uighurs are settled. Xinjiang borders on Kazakhstan, Kyrgyzstan and Tajikistan to the West, and Pakistan and Afghanistan to the South – all countries with partly strong Islamic movements that might potentially join forces with the Uighurs, or so the Chinese fear. 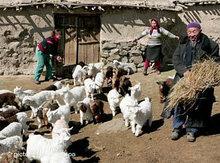 Uighurs were being detained, tortured and deported in an attempt to crush their language and culture, Rebiya Kadeer, president of the World Congress of Uighurs (WUC), recently said

​​In actual fact, there were several Uighurs in Afghanistan during the Taliban rule. The Chinese authorities have cited up to 1000 extremists allegedly trained by the Taliban, 300 of whom were picked up by the USA.

This figure is likely to be extremely exaggerated, however. "Many of the Uighurs in Afghanistan were probably just refugees," says Guido Steinberg, an expert on Islamic terrorism at the German Institute for International and Security Affairs in Berlin. "I don't consider the Chinese very credible on this matter."

Guido Steinberg is not the only German security expert not to trust the Chinese on this issue. Up to the 11 September 2001 attacks, there were few reports of Islamist extremists in Xinjiang. Although there were a number of attacks in the region during the 1990s, it is still unclear who carried them out.

So it was all the more surprising how freely the Chinese government joined in the "War on Terror" after 11 September. China was just as much at threat from Islamic extremism as the USA and Europe, the official explanation had it.

That meant the Chinese could kill two birds with one stone: firstly, their relations with the USA improved instantly, having previously been extremely tense. Up to then, the Bush government had viewed its opponent in the battle for global influence as China, not the Islamic world.

And secondly, the Chinese security authorities were able to continue their harsh repression of the Uighurs without prompting major criticism. From this point of view, the Uighurs are in an even worse position than the Tibetans, who at least have a globally networked solidarity movement behind them. The Uighurs, on the other hand, were of no interest whatsoever until very recently. 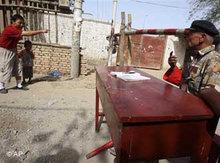 After a number of attacks in Kuga, province of Xinjiang, security measurements were tightened and checkpoints were installed

​​But who are the Uighur Islamists? The United Nations bowed to pressure from the USA in 2002, putting the "East Turkistan Islamic Movement" (ETIM) on its list of terrorist organisations. The Chinese authorities accuse the group of working with Osama bin Laden. ETIM had hardly made an impression beforehand, and has not ventured into the public arena since.

Guido Steinberg from the German Institute for International and Security Affairs suspects that some Uighurs may have joined the "Islamic Jihad Union" (IJU). The IJU, mainly made up of Uzbeks, operates in the border territories between Afghanistan and Pakistan and is alleged to have encouraged German Muslims to launch a terrorist attack in Germany.

The court case against the members of the "Sauerland cell" arrested in Germany in August 2007 begins this coming autumn.

Regardless of these possible links, German security experts are hardly trembling in fear at Uighur extremists – despite the fact that the World Uighur Congress, one of the most important exile organisations from Xinjiang, is based in Munich.

The Chinese embassy in Berlin has been leaning on the German government to close the World Uighur Congress for years, claiming it is responsible for terrorist attacks in China.

To form their own opinion on the situation, the German Federal Criminal Police Office sent a delegation to Beijing to find out about the alleged terrorist activities of Uighurs living in Germany. The evidence was scant, however, and the World Uighur Congress has not been banned in Germany. 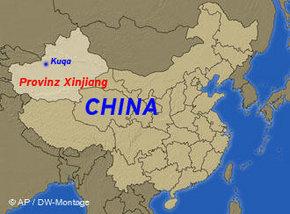 The Xinjiang province is, along with Tibet, a source of political tension in China. The territory's Turkic Muslim Uighurs have complained of repression by Chinese authorities. After the founding of the People's Republic of China in 1949, the former East Turkestan was annexed as an autonomous region - in a similar manner to Tibet

​​There certainly is potential for violence, she adds. "I know from people who have been there that there is a more radical faction among the Uighurs, which might become a threat."

The recent attacks might have been carried out by such a faction, calling attention to the Uighurs' problems from around the world. But other scenarios are also possible. Might it even be the Chinese secret service behind the events?

China's secret service is currently generally mistrusted, a victim of its own murky information policy. But that may well not bother the authorities – the recent bombings are the perfect justification for their newly tightened security regime.

China's Muslim Minority
China's Battle Against the Uighurs
The way China is treating the Tibetan uprising has outraged the West. The suffering of the Uighurs, on the other hand, receives little attention. Beijing defends the suppression of the Muslim minority as fighting terrorism. Andreas Leixnering reports

Tibetan Conflict
Third Party: Muslims
One foreign freelance journalist has managed to enter the Tibetan crisis zone as a tourist. According to her observations, the protests are not just the result of major aggressions against Han Chinese on the part of Tibetans, but also of antipathy towards Muslims. By Nina Ritter