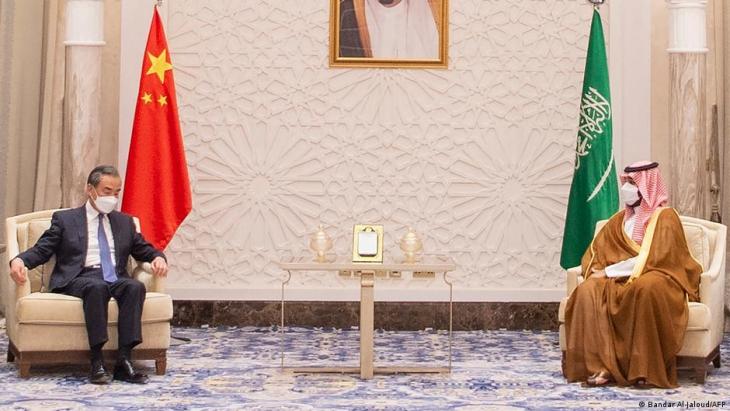 The last week in March saw China's Foreign Minister Wang Yi visit six countries in the Middle East: Saudi Arabia, Turkey, Iran, the United Arab Emirates, Oman and Bahrain. Two initiatives in particular are sending the clearest signal yet that China may be gearing up to play a greater political role in the Middle East. By James M. Dorsey

Touring the region at the end of March, Chinese Foreign Minister Wang Yi laid out five principles Middle Eastern nations would need to adopt to achieve a measure of regional stability. He called on the region's rivals "to respect each other, uphold equity and justice, achieve nuclear non-proliferation, jointly foster collective security, and accelerate development cooperation."

Chinese ambassador to Saudi Arabia Chen Weiqing said China would be "willing to play its due role in promoting long-term peace and stability in the Middle East." China is focussing on Gulf security and the conflict with Iran as well as the Israeli-Palestinian dispute.

Wang said before leaving for the Middle East that China would be willing to host a multilateral Gulf security dialogue that would initially focus on securing oil facilities and shipping lanes. 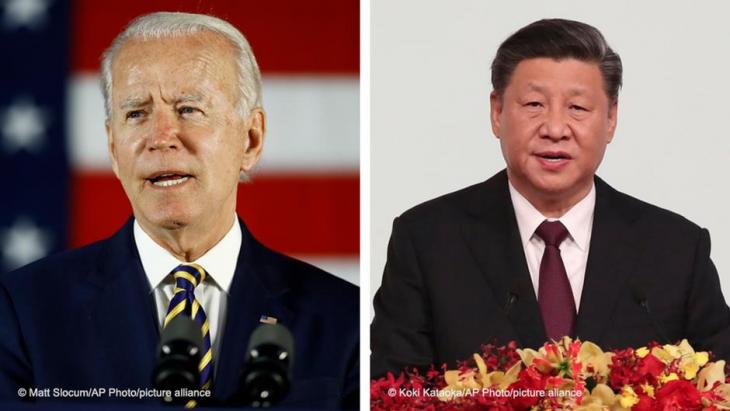 Joe Biden's new administration in Washington is getting tough on China and this is having an impact on the Middle East: "A China that feels less concerned about falling foul of U.S. sanctions on Iran as Chinese–U.S. relations dive could significantly help the Islamic Republic dampen the effect of Washington's punitive measures," writes James M. Dorsey

China, however, is likely to find that maintaining good relations with all parties works as long as it focuses on economics – and even that could prove tricky if a 25-year long political, economic and strategic China-Iran co-operation agreement signed in Tehran this week by Mr Wang and Iranian foreign minister Mohammad Javad Zarif proves to be what Iran suggests it could entail.

Moreover, finding common political ground among regional adversaries could be even riskier and more difficult.

Saudi Arabia has so far suggested that it has little interest in a gradual process that would allow Iran and its detractors to address low-hanging fruit before tackling thornier issues, despite Chinese hints in recent months that it would engage provided Middle Eastern nations adopted its principles.

Saudi Arabia is the only Gulf country to have in the last year refrained from offering humanitarian aid to Iran, the country in the region hardest hit by the pandemic.

By the same token, Iran is unlikely to appreciate Mr Wang's reassurance during his stop in Riyadh that China supports Saudi regional leadership even if it does not express its view publicly in a bid to avoid jeopardising its closer cooperation with China.

China sees endorsement of its principles as a way of managing rather than resolving myriad Middle Eastern conflicts and avoiding being sucked into them.

The Chinese initiatives are designed to exploit fears in Saudi Arabia, the United Arab Emirates and Israel that U.S. President Joe Biden's efforts to negotiate a return to the 2015 international agreement that curbed Iran's nuclear programme would not immediately address their concerns.

The Middle Eastern states want any agreement to also include limits on Iran's ballistic missile programme as well as an end to its support of non-state actors in Lebanon, Syria, Iraq and Yemen. The Gulf states and Israel have little faith in the Biden administration's suggestion that a revival of the nuclear agreement that former U.S. President Donald Trump abandoned in 2018 would create the basis for negotiations on non-nuclear issues.

The Chinese initiatives are also intended to cater to Middle Eastern concerns at a time that China and Western nations are locked into a tit-for-tat over criticism of Beijing's brutal crackdown on Turkic Muslims in the north-western province of Xinjiang.

The UAE and Saudi Arabia, home to Islam's two holiest cities, have sought to legitimise the crackdown, which reportedly involves forcing the region's Muslim Uighur population to violate Islamic law, by describing it as a legitimate fight against extremism and political Islam.

Saudi and UAE backing of the crackdown fits the two states' religious soft power endeavours that propagate a vaguely defined notion of 'moderate' Islam centred on the principle of absolute obedience to the ruler and repression of political Islam. The Saudi-UAE notions fit hand in glove with Chinese autocracy as well as its efforts to sinicise Muslim culture in China.

Nonetheless, Wang's visit to Iran is likely to have set off alarm bells in Riyadh. A China that feels less concerned about falling foul of U.S. sanctions on Iran as Chinese–U.S. relations dive could significantly help the Islamic republic dampen the effect of Washington's punitive measures. Chinese imports of sanctioned Iranian oil have surged in recent months. 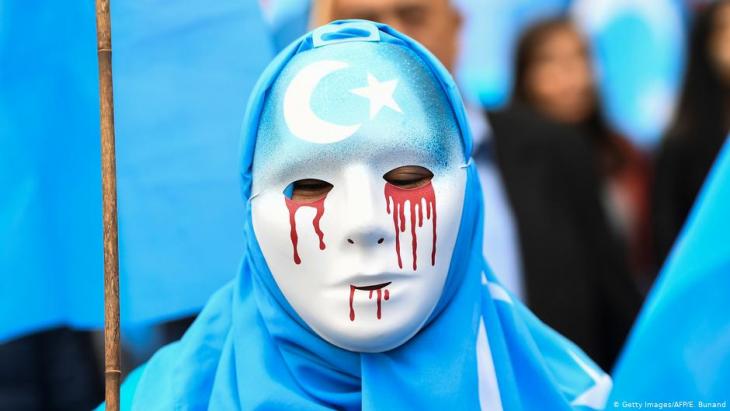 The Uighur are a Turkic-speaking minority in China's north-western Xinjiang province. They are predominantly a Sunni Muslim community, and one of the 55 recognised ethnic minorities in China. Pictured here: a demonstrator protesting against China's treatment of uighurs. According to James M. Dorsey, China’s recent initiatives in the Middle East "are also intended to cater to Middle Eastern concerns at a time that China and Western nations are locked into a tit-for-tat over criticism of Beijing's brutal crackdown on Turkic Muslims"

Few details of the China-Iran agreement have been made public, but it holds out the promise of Chinese investment in Iranian infrastructure, energy, mining, industry and agriculture.

Wang also said on the eve of his Middle East tour that he would be inviting Israelis and Palestinians to Beijing for talks. He held out the prospect of China when it takes over the United Nations Security Council presidency for the month of May pushing for a resolution that would reaffirm the principle of a two-state solution.

There is little prospect that the Chinese initiative would be any more successful than its past efforts to mediate between Israelis and Palestinians, even if the United States were to support the resolution. Israeli elections this month, the fourth in two years, are unlikely to produce a government that would have the stability, cohesion and willingness to negotiate a deal that would meet minimal Palestinian aspirations.

Said China analyst Eyck Freymann: "The status quo in the Middle East basically works in China's favour. The United States spends enormous sums to combat extremist groups and protect freedom of navigation in the region, and China benefits… What China wants is to preserve this arrangement while gradually acquiring the ability to pressure individual countries to bend its way."

Dr. James M. Dorsey is an award-winning journalist, a senior fellow at Nanyang Technological University's S. Rajaratnam School of International Studies in Singapore and the National University of Singapore's Middle East Institute, and author of the syndicated column and blog, The Turbulent World of Middle East Soccer.

Chinese President Xi Jinping's visit to Saudi Arabia in December 2022 may have rattled Washington, but it simply highlighted the Arabs’ desire to diversify their foreign relations ... END_OF_DOCUMENT_TOKEN_TO_BE_REPLACED

In Doha, Arabs from Morocco, Tunisia, Egypt and Algeria are gathering to celebrate the first ever FIFA World Cup to be held on Arab soil. The criticism from Europe? Over the top, ... END_OF_DOCUMENT_TOKEN_TO_BE_REPLACED

After a two-year hiatus, the Arab League re-convened at the beginning of November in Algiers against a backdrop of uncertainty and discord. By Pierre Boussel END_OF_DOCUMENT_TOKEN_TO_BE_REPLACED

Anger in the Middle East is spreading over comments made by an official of India's ruling BJP about the Prophet Muhammad, with various countries summoning New Delhi's envoy and a ... END_OF_DOCUMENT_TOKEN_TO_BE_REPLACED

Women's empowerment in the Gulf has become a tool of deflection, rather than a genuine effort to promote women’s full and equal participation in society. By Mira Al-Hussain END_OF_DOCUMENT_TOKEN_TO_BE_REPLACED

A straightforward message emerged from last week’s meeting in the Negev desert of the foreign ministers of four Arab countries, Israel and the United States: Israel is key to the ... END_OF_DOCUMENT_TOKEN_TO_BE_REPLACED
Author:
James M. Dorsey
Date:
Mail:
Send via mail

END_OF_DOCUMENT_TOKEN_TO_BE_REPLACED
Social media
and networks
Subscribe to our
newsletter